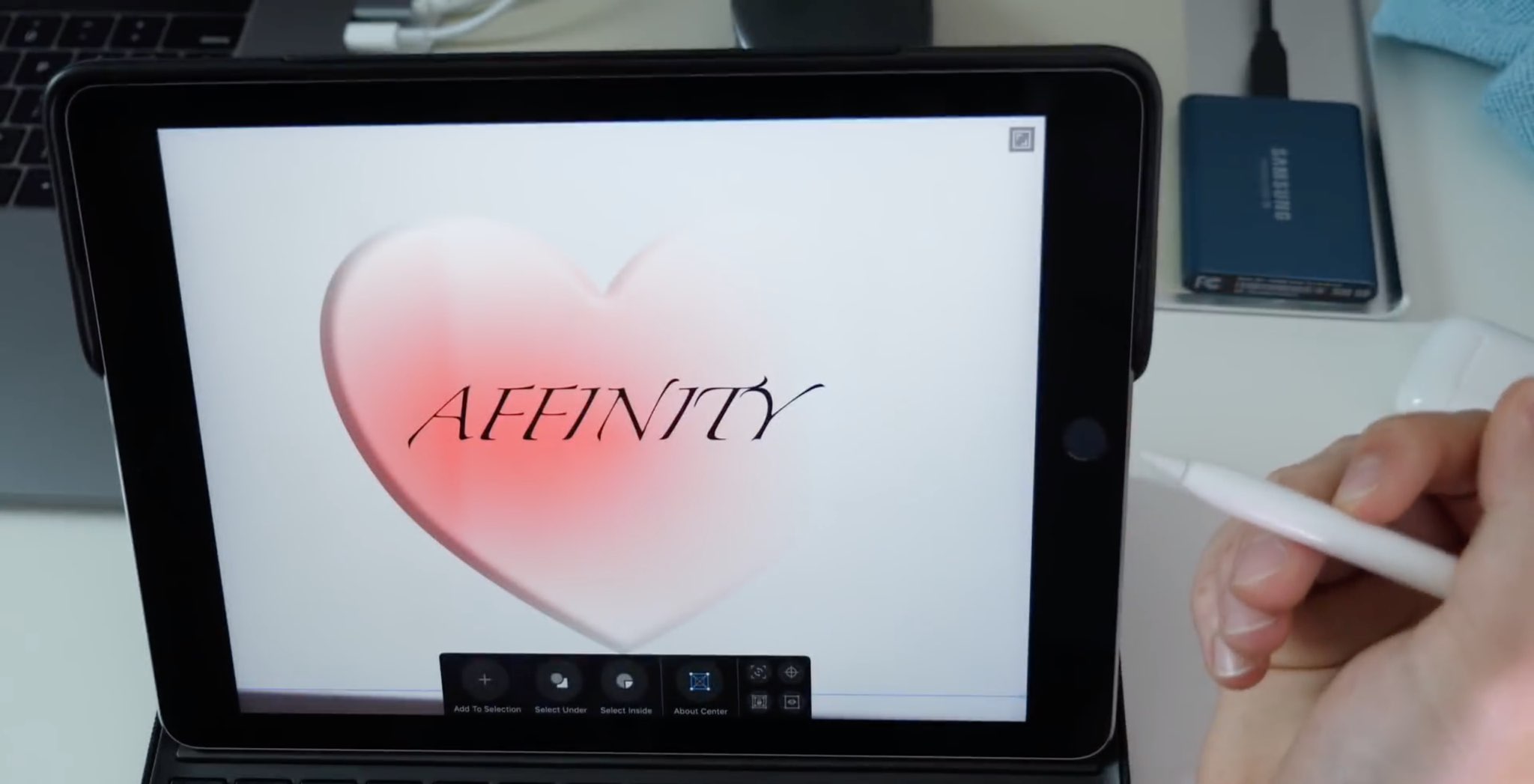 British developer Serif in July released an iPad edition of Affinity Designer, its Adobe Illustrator rival for Mac and Windows PCs. Today, we’re taking a much closer, more comprehensive look at this first-rate vector drawing iPad app that doesn’t skimp on advanced features in turning the Apple tablet into a premiere platform for digital illustrators and artists.

The full-blown iPad app is priced at just $19.99, which we consider a total steal for such a powerful piece of software. Affinity Designer for iPad packs in full Apple Pencil support with tilt, angle and pressure detection.

But you’ll find plenty more in this triple-A app, from the approachable tools for novice users to the more advanced stuff aimed at creative pros.

One key benefit of constructing illustrations from vector elements such as in Adobe Illustrator—as opposed to manipulating pixels in raster-based apps like Photoshop or Pixelmator—is that vector content like your fonts and PDF documents retains full fidelity and crispness no matter the zoom level.

Resolution independence is great when working on graphics for anything from marketing brochures, websites and UI designs to cool concept art and logos for memes and what not. 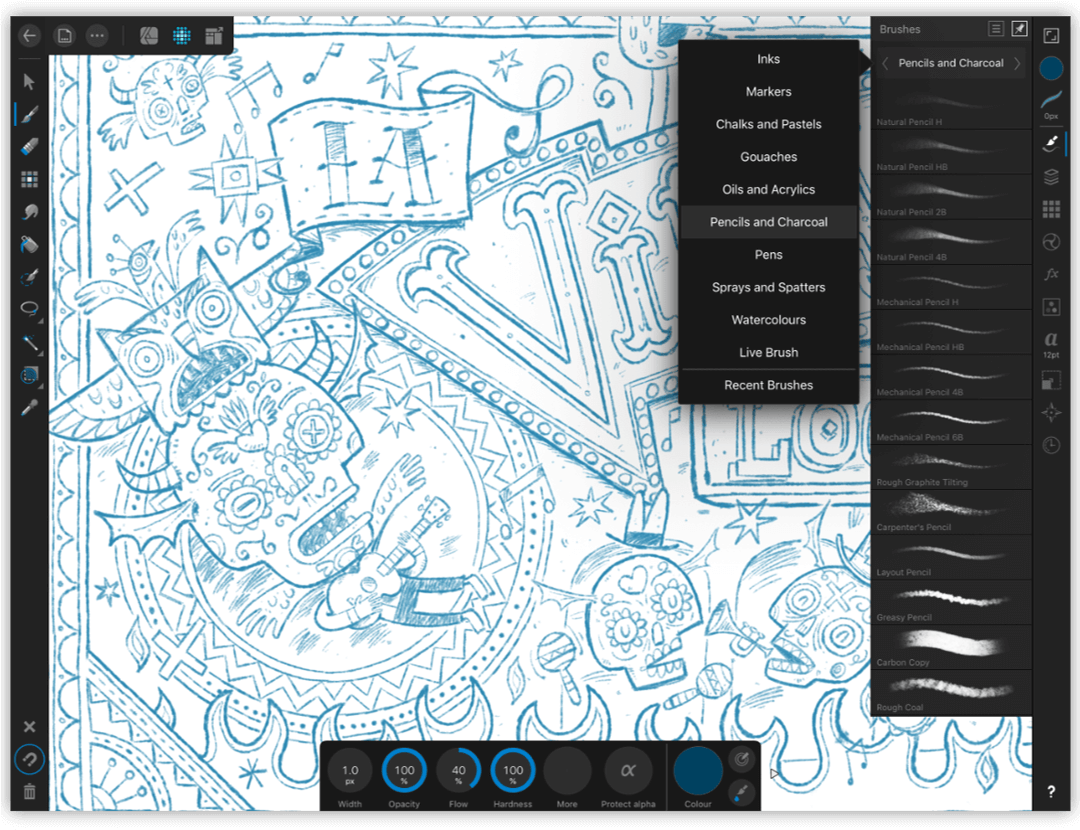 Because they’re represented mathematically, vector objects are resolution independent. You’ll instantly appreciate this as you first play withs Affinity’s near-infinite zoom. Or, when you’re able to export the project at any resolution you like at no quality loss.

We’ve asked our young video editor Harris Craycraft to put together a hands-on video walkthrough of the most important features in Designer, here’s what he came up with.

Thanks to a shared file format and seamless switching between Affinity apps, Designer is the perfect companion to their photo-management app Photo (also available on iPad in App Store for $19.99) and the upcoming desktop publishing software Publisher, currently available as a free public beta ahead of launch later this year.

Upon launching this high-powered studio app, a splash screen shows up.

Your cloud documents are available on any mobile or desktop device through the app. 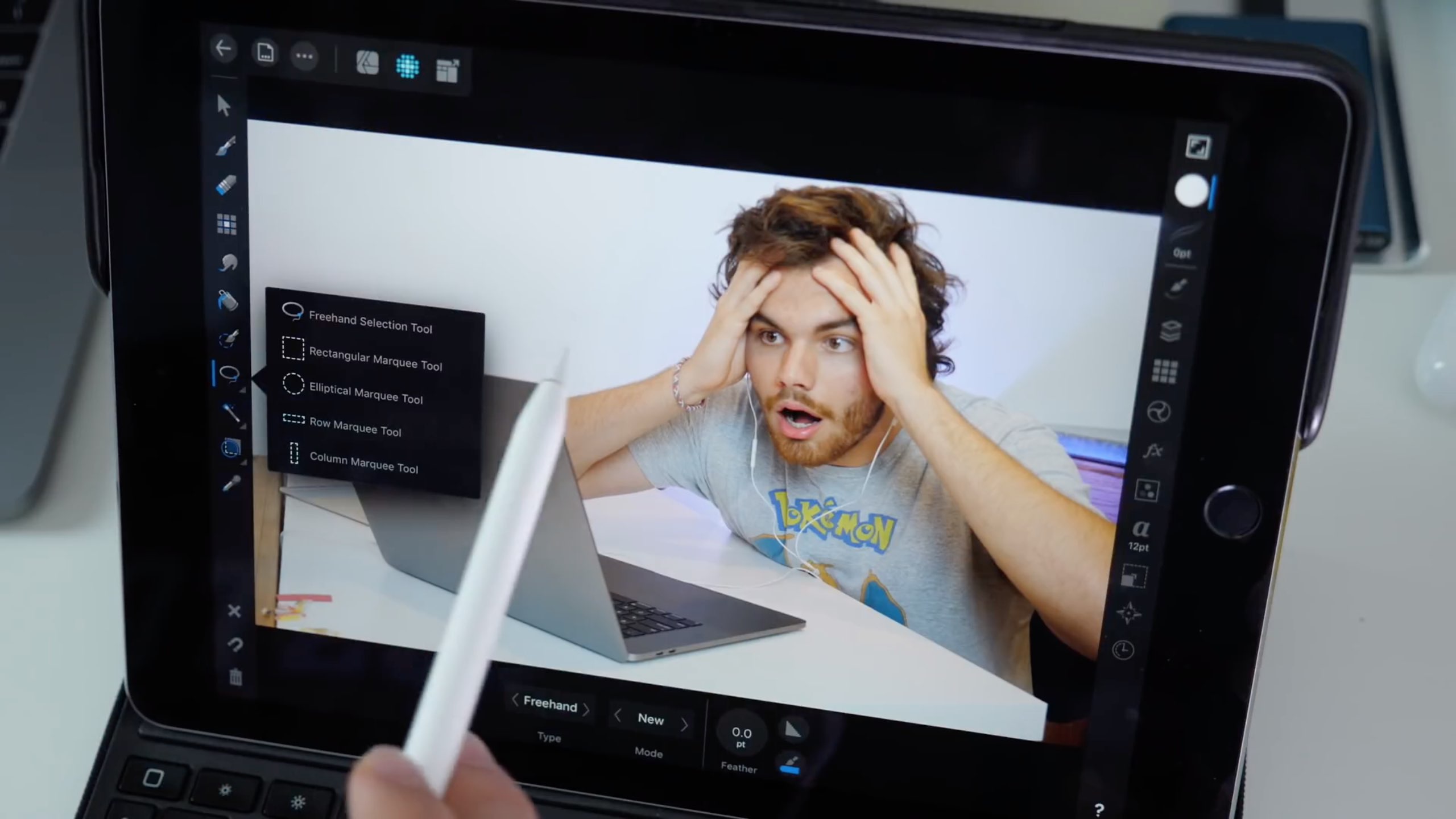 Like other vector-based tools, Designer provides you with plenty of options for putting together designs just the way you envisioned. For any document, you can choose its size, assign a custom color profile and change a bunch of other detailed settings.

Two basic tasks when it comes to drawing illustrations in vector apps like Designer—incorporating images into projects and customizing the background—are readily accessible. 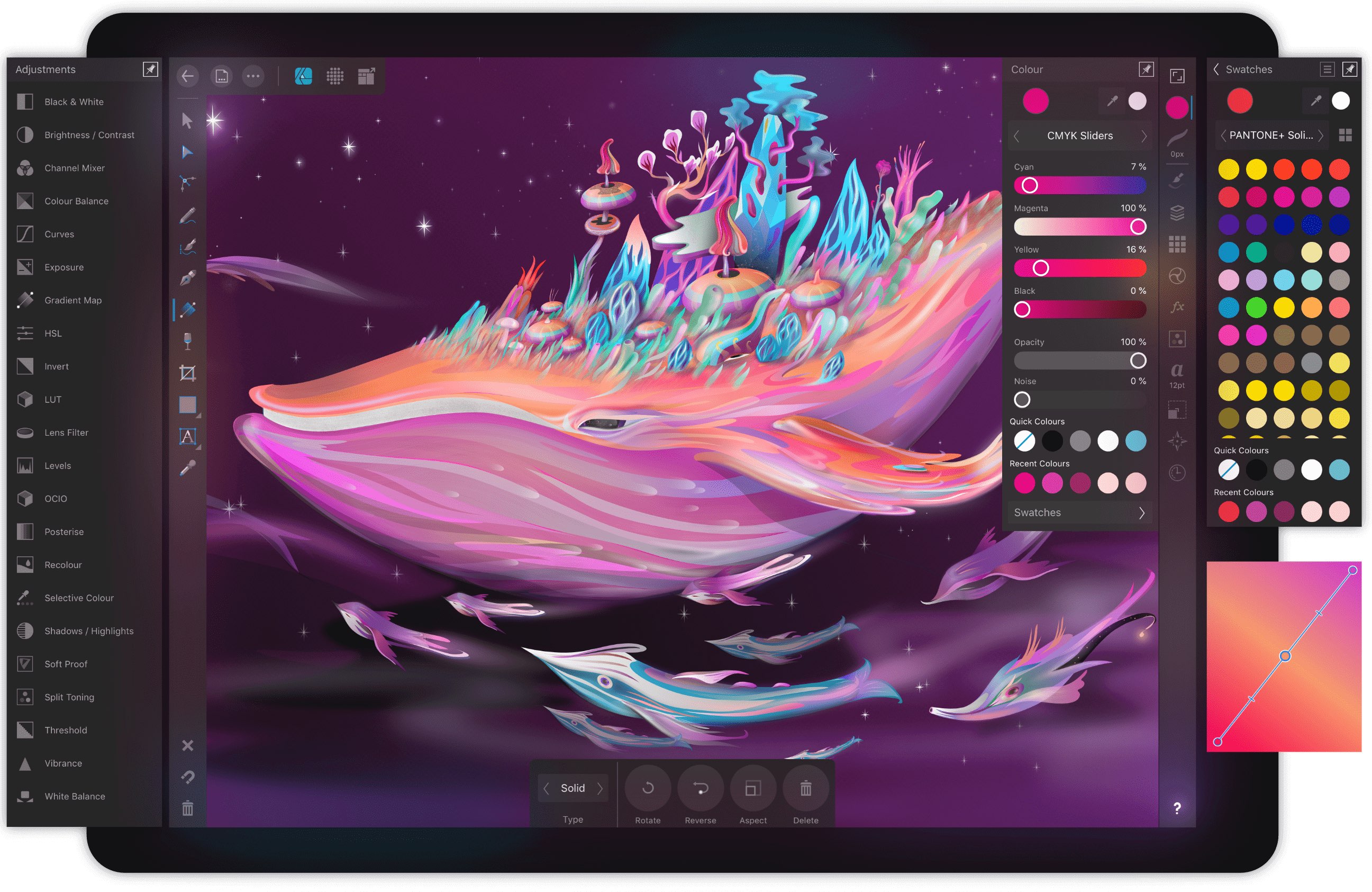 Document customization with CMYK export, your PANTONE swatches and more!

The document menu brings a bunch of options, among them importing or inserting documents, images and other content into the project.

Designer sets itself apart from Adobe Illustrator and other vector drawing apps for creative pros by incorporating personas, which enable different ways of working within the app. There are three distinct personas available, each with its own set of features:

You can switch between personas with a single tap to have your workspace, tools and panels within the app change to that persona’s way of working.

The default Draw persona has all the tools you need to create resolution-independent vector shapes that are resizable any way you want without losing quality. You can draw with the pencil tool or vector brush, and change from well over a hundred different brush types and such parameters as thickness, opacity and color.

You can manipulate a shape by adding or changing points along the curve. It’s especially impressive how easy it is to add text on a path—you just hit with your finger either above or below the curve—and drag text anywhere you want along the curve. The FX button gives you access to a bunch of transformations and effects, like 3D extrusion, Gaussian blur and overlays, that can be applied to any layer or selected object. 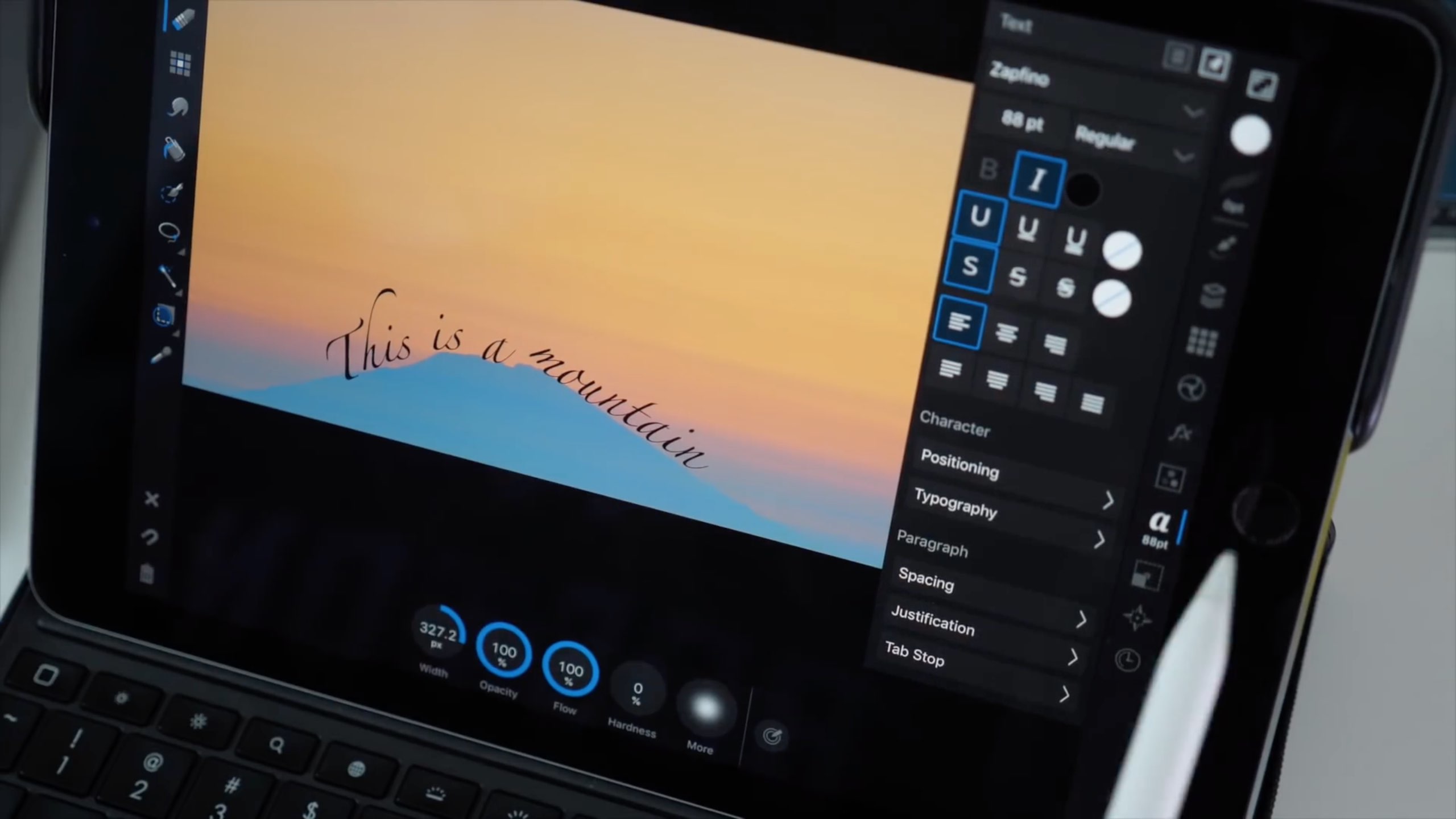 Text along the curve is super-easy in Designer

Use the Draw person to create vector drawings, logos, app or web design elements and so forth.

The Pixel persona lets you manipulate bitmap images and create raster objects with resolution-dependent tools, like gradient fill, raster brushers and so forth.

Use the freehand tool to drag around your selection. Adding or connecting lines is simple thanks to the polygonal tool used to produce straight edges. I also liked the magnetic mode—which follows a path and snaps to pixel edges between connecting points—and a smart-selection brush with snap to edges and auto select. 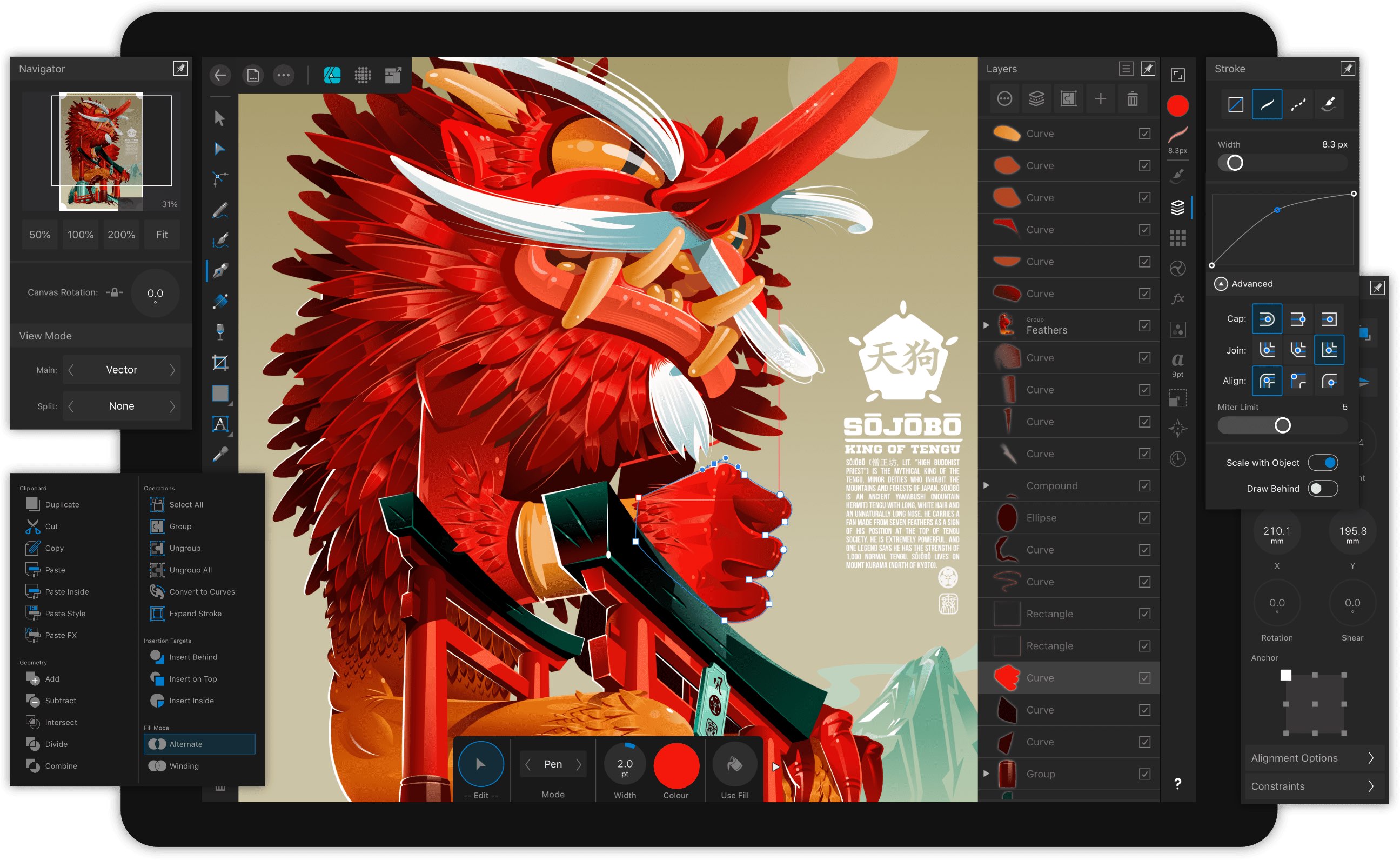 Refining selections is also easy: you can brush over sections to matte them, which prompts Designer to reprocess the selection, or switch to the foreground tool to add to rather than subtract from your selection. To adjust for the most contrast and accuracy when making precise selections, change the background in the settings.

Use this persona to produce painted raster images set to a specific pixel resolution. For maximum impact, enrich your bitmap images with rasterized vector objects like logos and other artwork you previously created using the Draw persona. 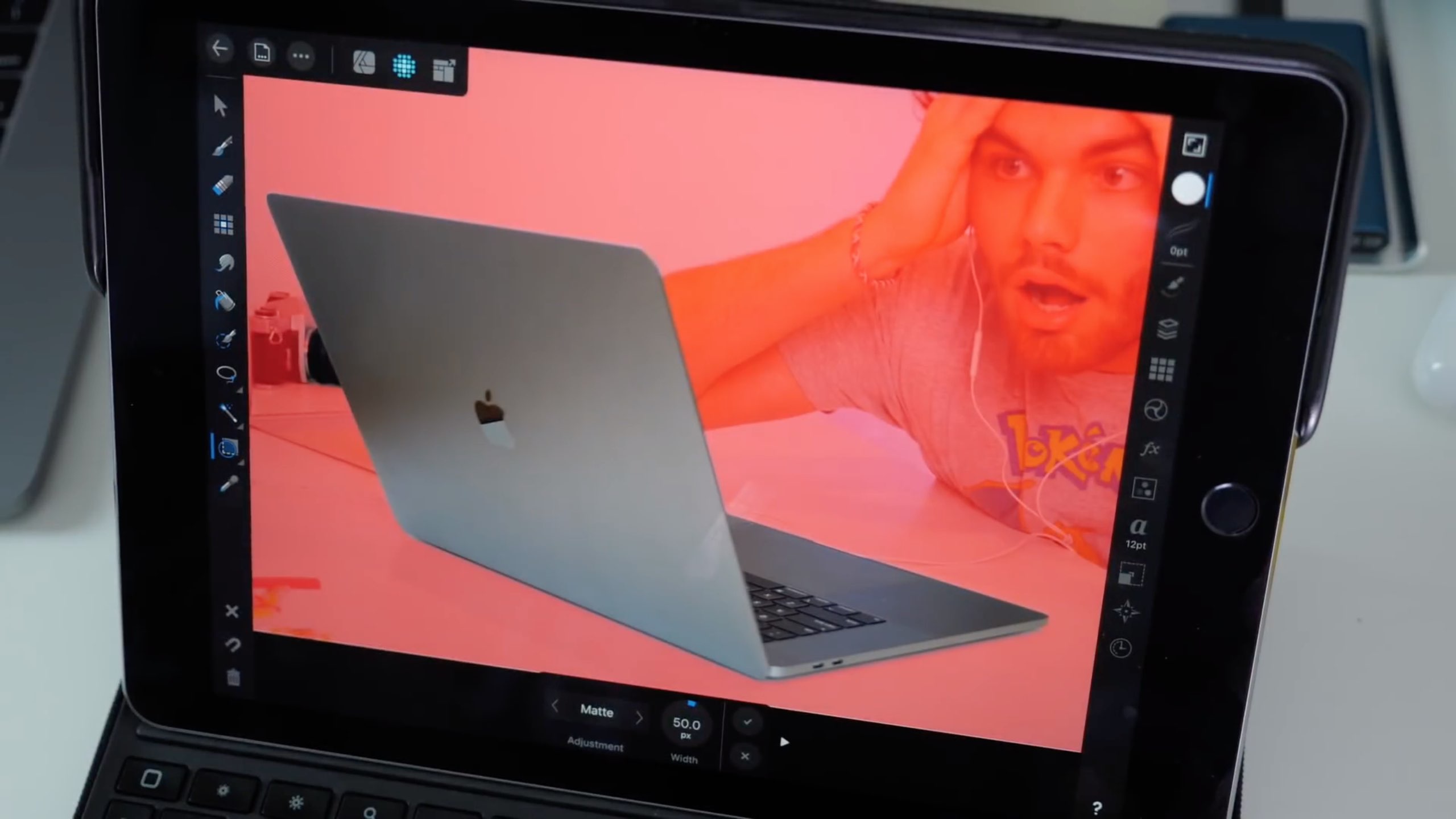 After you create some shapes, feel free to really spice your work up by exploring the gradients under the effects menu. This is really powerful: you can change endpoints, add your own increments, zoom in and out, change transparencies and way, way more.

The Export persona deals with single object, layers or whole documents. Use it to automatically create slices based on specific parameters like size, formats, compression, colors, export format etc. 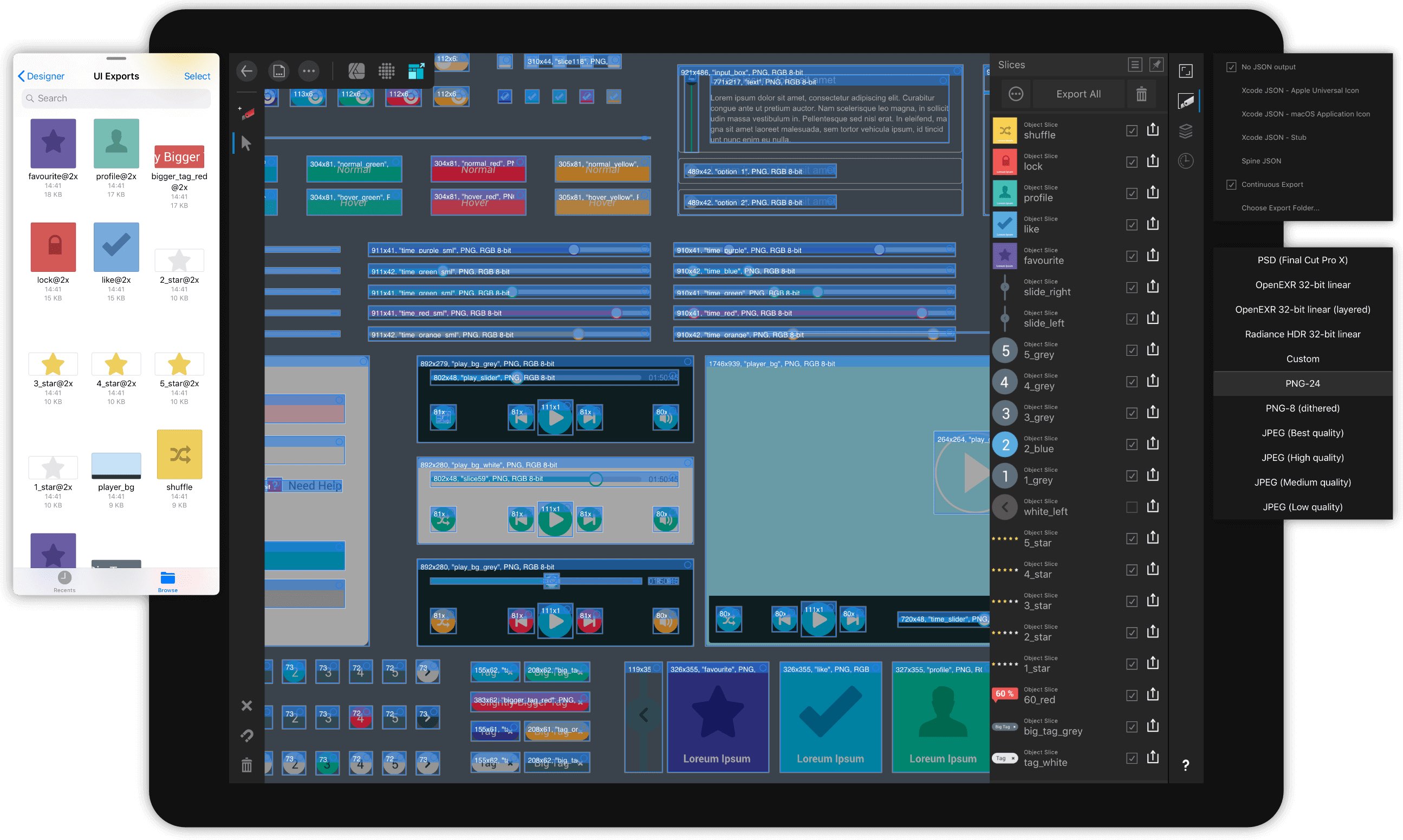 You can export all, some or specific areas of your design for web, print, etc.

While the Export persona lets you export files in a plethora of useful formats, some of which are suitable for the web, it’s not a full-on webpage layout app. And though the Pixel persona has some photo editing features, it’s not as fully featured as the personas in Affinity’s Photo app.

In many ways, Affinity Designer is comparable to Adobe Illustrator.

And with perks you don’t see often in a mobile app—like importing fonts or extensive support for press-ready PDF/X-4 and fully-layered Photoshop PSD file formats (and several other vector formats like SVG and EPS)—it doesn’t get any better than this, really. 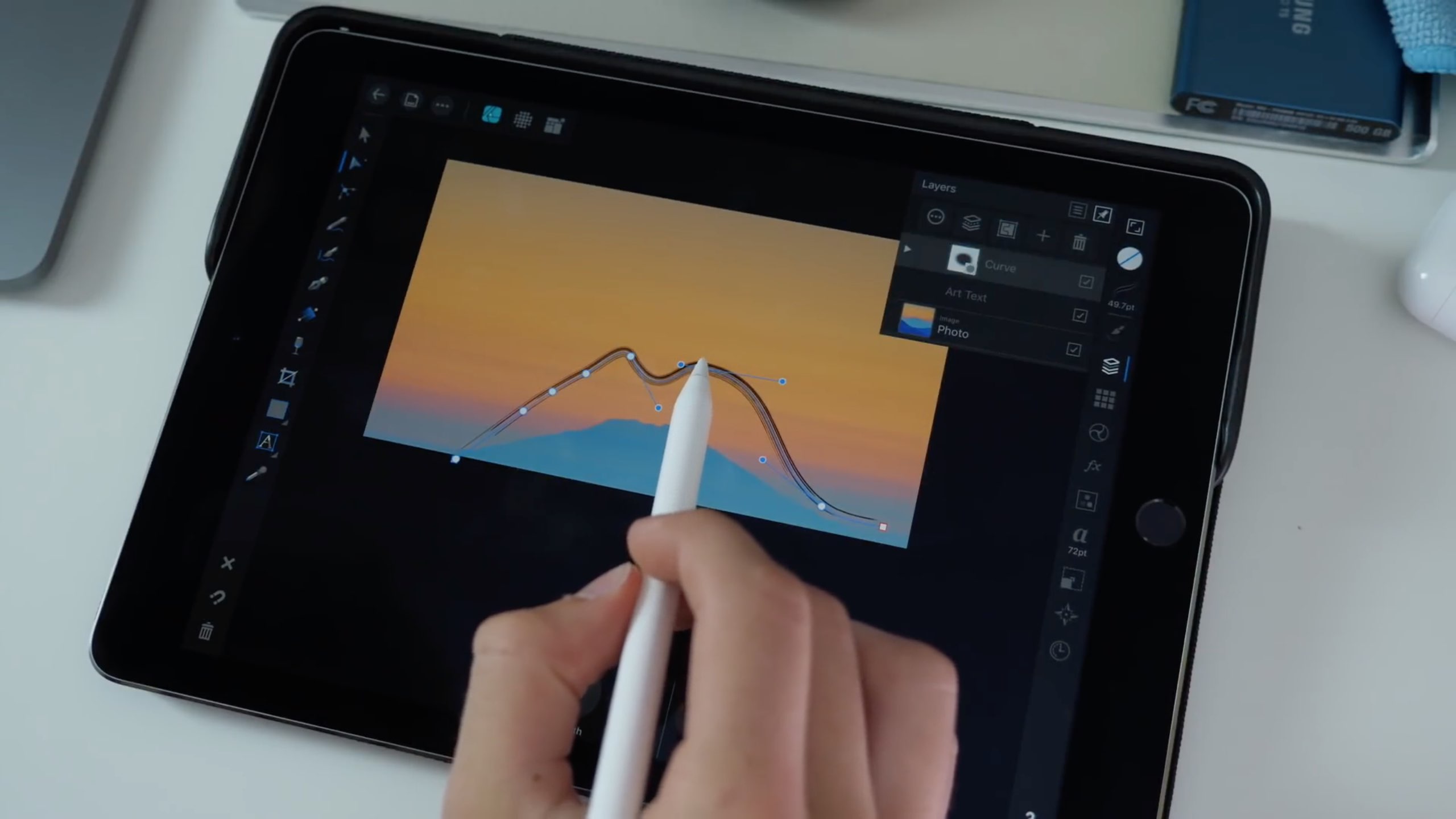 The user interface may be a bit overwhelming at first, but this wasn’t entirely unexpected.

Remember, this is no toy. I wish some of the most commonly-used tools weren’t hidden behind flyout menus, like zoom to fit and zoom to 100%. I’m guessing developers may fix that in a future update.

Other than that, I’ve had no major complaints about this powerful app.

Here are the key highlights of what you’ll love about Affinity Designer.

To learn more about Affinity Designer for iPad, check out the official website.

Putting an incredible amount of creative power in the hands of the iPad owner, this app competes super-well with the significantly pricier high-end illustration creation apps. It even successfully rivals Photoshop’s fine-tuned selection and other capabilities.

Thanks to Designer’s richness and incredible depth, your iPad Pro truly becomes a premiere platform for digital illustrators and artists. Out of the box, you get such features as layer styles, multiple art boards, advanced text tools, raster painting capability and so forth.

Affinity Designer takes full advantage of Apple’s Metal graphics framework that speeds up graphics by enabling low-overhead access to the GPU. You’ll get 120 frames per second on your iPad Pro no matter what you do. Metal helps Designer convert all the power and precision of its desktop app into a remarkably powerful and fluid tablet experience.

I’m also liking that the app is a good citizen on both iOS and macOS—iCloud Drive integration makes storing and sharing your projects frictionless and simple. And with an array of professional drawing tools, a complete vector toolset with robust CMYK color support and the most advanced export capability ever seen on iPads, what’s there not to like about it?

Check out Serif’s promotional video for the iPad app, embedded right below.

As I mentioned at the beginning of this review, Affinity Designer for iPad is a steal even if you’re only remotely interested in creating complex vector-based designs.

I like that developers have priced the app so aggressively—I’d normally expect such an affordable price point from a premium iPad game like Sid Meier’s Civilization VI but certainly not from a high-powered, professional productivity and content creation software.

Here’s what we liked and disliked about Affinity Designer

Want to test-drive Designer’s desktop app for Mac and Windows?

Grab Affinity Designer for iPad in App Store for $19.99.

Keep in mind that Affinity Designer requires a fairly modern iPad model, like an iPad Pro, iPad Air 2 or any early-2017 iPad or newer. Older models are unsupported.

Affinity Designer for macOS is a $49.99 download from Mac App Store.