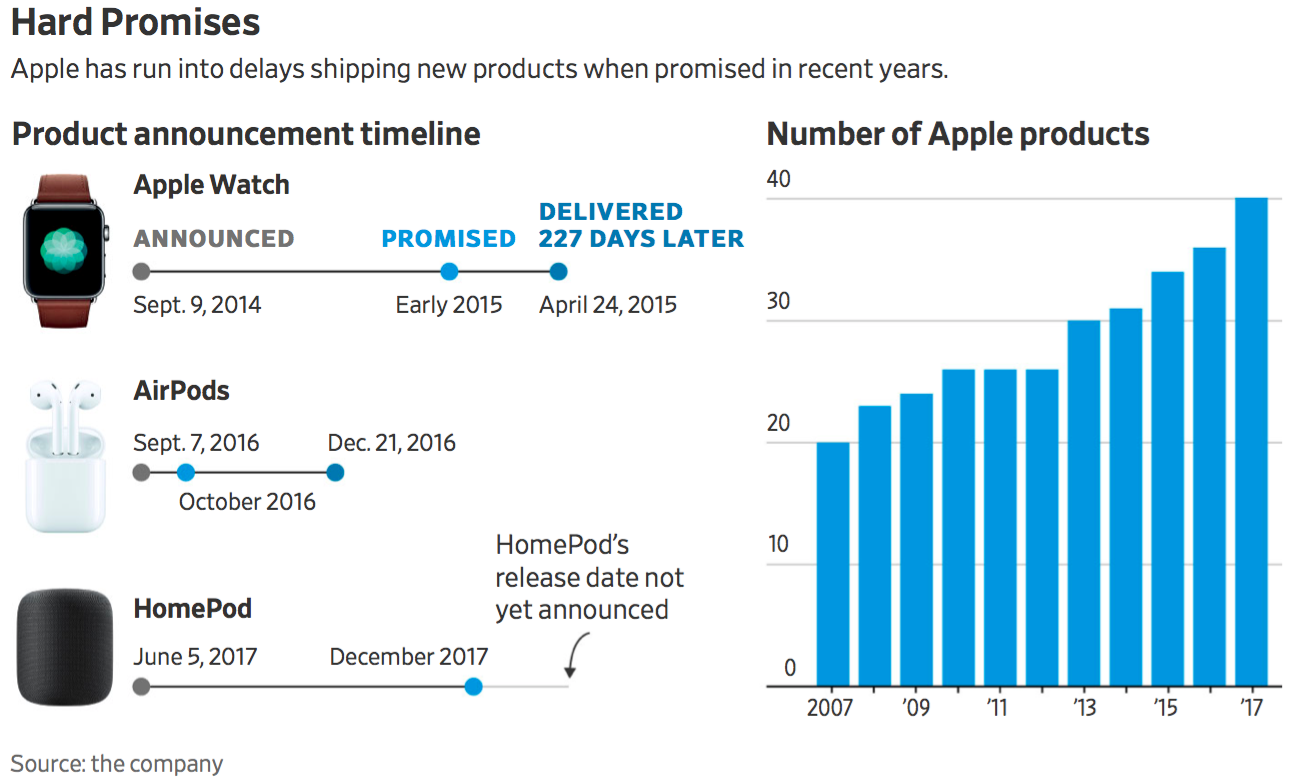 Apple has been notably late delivering new devices under the leadership of its CEO Tim Cook, who in his previous role as the company’s chief operating officer was widely known for ensuring that new gadgets hit the market on schedule.

Taking a closer look at the recent product delays at Apple, The Wall Street Journal’s Tripp Mickle has analyzed the longer waits between them announcing a product and shipping it.

Compared with the 11-day average over the six years prior, there’s now an average wait time of 23 days for new and updated products. Of the three major new products since Cook became the CEO in 2011, both AirPods and HomePod missed their publicly projected shipping dates.

One reason for the delays could lie in the differences in approach between Cook and his predecessor Steve Jobs. Mr. Cook announces products and shipment dates earlier than did Mr. Jobs, who former employees said preferred waiting until a product was ready for shipment before publicizing it, except for unique devices like iPhone and Apple TV.

Of the 70-plus new and updated products launched during Mr. Cook’s tenure, five had a delay between announcement and shipping of three months or more and nine had delays of between one and three months.

Roughly the same number of products were launched during Mr. Jobs’ reign, but only one product was delayed by more than three months and seven took between one and three months to ship after the initial announcement.

On the other hand, an argument could be made that Apple is now a very different company than when Jobs was alive, with a significantly deeper portfolio of products that must be refreshed on an annual basis. Besides, the supply chain and competitive landscape are now vastly more complex than they used to be a few years back, as are Apple devices.

In recent years, for example, Apple has sourced each component in an iPhone camera from lens to sensor to adhesives, as opposed to buying an entire camera assembly from one supplier (usually Sony) for early models of its iconic smartphone.

Laser sensors in AirPods that detect when the device is inserted into an ear have also made manufacturing more difficult. And with iPhone X, Apple ran into production challenges because the infrared laser transmitter that the new TrueDepth facial-recognition camera uses was so sensitive that it could easily be knocked out of alignment.

By moving to control more components in its supply chain, additional staff and coordination is required between suppliers and assemblers, potentially causing delays. For context, Apple has increased its number of employees sevenfold in the decade since it launched iPhone.

And with an estimated 1.1 billion devices in use worldwide, or about triple the 400 million in early 2013, meeting the demands of Apple’s vast global customer base is contributing significantly to the logistical and manufacturing challenges of shipping products on time.

Apple used to pride itself by announcing products that are ready to ship versus previewing things like the new iMac Pro and the current Mac Pro months in advance. Although unexpected delays do cost Apple sales, I think it’s more important to be right than first.

I’d rather have them ship things when they’re ready versus rushing half-baked products out.

Is Apple spreading themselves too thin? Are engineers struggling with limited time and attention because Apple’s top executives are now working across so many products?