In a statement provided Wednesday to TechCrunch’s Matthew Panzarino, it didn’t deny deliberately slowing down iPhones that aren’t operating at peak battery performance.

“Our goal is to deliver the best experience for customers, which includes overall performance and prolonging the life of users’ devices,” a company spokesperson told the publication.

“Lithium-ion batteries become less capable of supplying peak current demands when in cold conditions, have a low battery charge or as they age over time, which can result in the device unexpectedly shutting down to protect its electronic components,” the statement reads.

Although Futuremark did not find evidence of intentional CPU throttling, Geekbench founder John Poole has established a link between sluggish iPhone performance and battery age.

As Panzarino explained, some older iPhone models like iPhone 6s were hitting peaks of CPU performance that the battery was unable to power, and the phones were shutting off.

“Apple then added power management to all iPhones at the time that would ‘smooth out’ those peaks by either capping the power available from the battery or by spreading power requests over several cycles,” the author wrote.

In simpler terms, you’re always going to be triggering this effect when you run a demanding benchmark. Conversely, you won’t always trigger this when using an iPhone like normal.

iPhone batteries are designed to retain up to 80% of their original capacity at 500 complete charge cycles. Apple’s standard one-year warranty includes service coverage for a defective battery, with out of warranty battery replacements priced at $79, plus $6.95 shipping.

TUTORIAL: How to check if your iPhone battery needs replacing

When the battery no longer performs as intended, users see a message in Settings → Battery informing them that their iPhone battery may need to be serviced or replaced. There are various factors that can affect the performance and lifespan of your device’s battery, including number of charge cycles, age of your battery and exposure to extreme heat or cold.

CPU throttling was most recently applied to iPhone 7 with iOS 11.2. 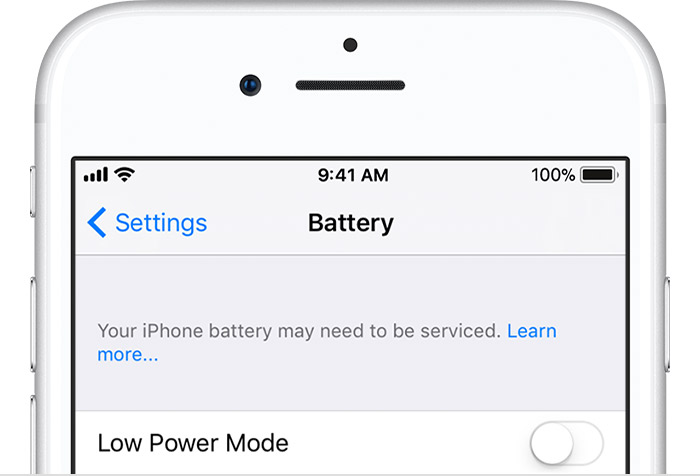 According to Apple, they plan on rolling this out to more phones in the future:

Last year we released a feature for iPhone 6, iPhone 6s and iPhone SE to smooth out the instantaneous peaks only when needed to prevent the device from unexpectedly shutting down during these conditions. We’ve now extended that feature to iPhone 7 with iOS 11.2 and plan to add support for other products in the future.

Panzarino went on to argue that Apple is not trying to force customers to upgrade their older iPhones by making the devices deliberately run slower for no apparent reason.

“It would be beyond stupid and incredibly shortsighted for Apple to do this and, if it was actually true, would likely lead to tangles of a governmental and legal nature that no company like Apple would ever want to happen,” he wrote.

I have no problem whatsoever with Apple’s explanation because, after all, many people who have replaced their aged iPhone battery did see a noticeable speed increase.

What I do find problematic though is the fact that Apple does not provide a toggle in Settings that would permit tech-savvy customers to disable this behavior.

As Geekbench’s Poole himself stated, this unnecessarily confuses folks who may believe that the slowdown is due to poor CPU performance, instead of a deficiency in battery power.

Many ordinary users who don’t read technology blogs may wrongly conclude that their phone is slow by default, leading them to buy a new handset rather than a new battery.

What’s your take on Apple’s explanation?