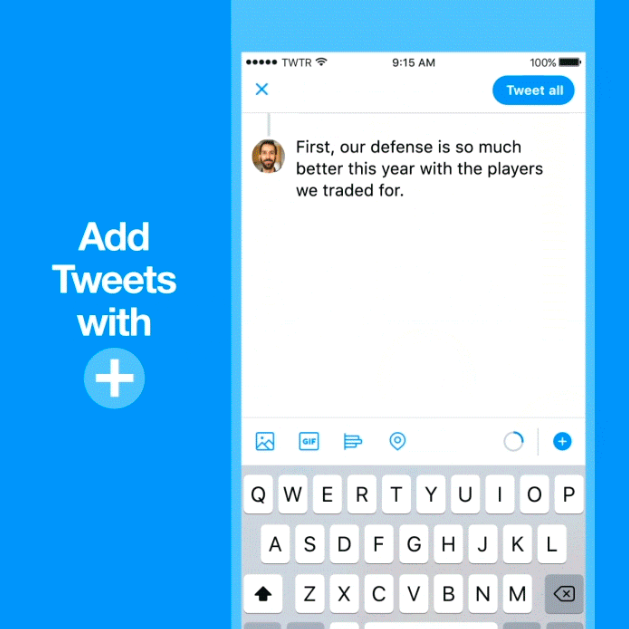 Twitter on Tuesday announced a new Threads feature in its mobile app for iPhone and iPad, making it a lot easier to post so-called tweetstorms to the micro-blogging service.

Threads is a feature designed as “a nod to the creativity of the community.”

A few years ago we noticed people creatively stitching tweets together to share more information or tell a longer story – like this. We saw this approach (which we call “threading”) as an innovative way to present a train of thought, made up of connected but individual elements.

Tweetstorm, in a nutshell, is a hack of sorts that the Twitter community has come up with in order to be able to serialize a longer story or thought on the service, provide ongoing commentary on an event or topic and more.

The problem is, this tweeting method, though effective, is quite tricky to create. Making matters worse, reading or discovering all the tweets in a tweetstorm can be challenging.

We’re introducing an easier way to Tweet a thread! 👇 pic.twitter.com/L1HBgShiBR

If your thoughts cannot fit in 280 characters, simply tap a new plus button at the bottom of the interface without posting the first tweet. Doing so will add a new tweet to the thread.

You can add as many tweets to a thread as you’d like and publish them all in one go with a tap of the Tweet All button so that they appear one after the other in people’s timelines.

Spotting a thread has been simplified, too, with a new “Show this thread” label.

This update to threads will be rolling out over the next few weeks, so you can easily connect and Tweet multiple thoughts all at once.

Threads is a staggered rollout so not everyone will get this feature at the same time—Twitter is rolling Threads out to everyone on iOS, Android and Twitter.com in the coming weeks.