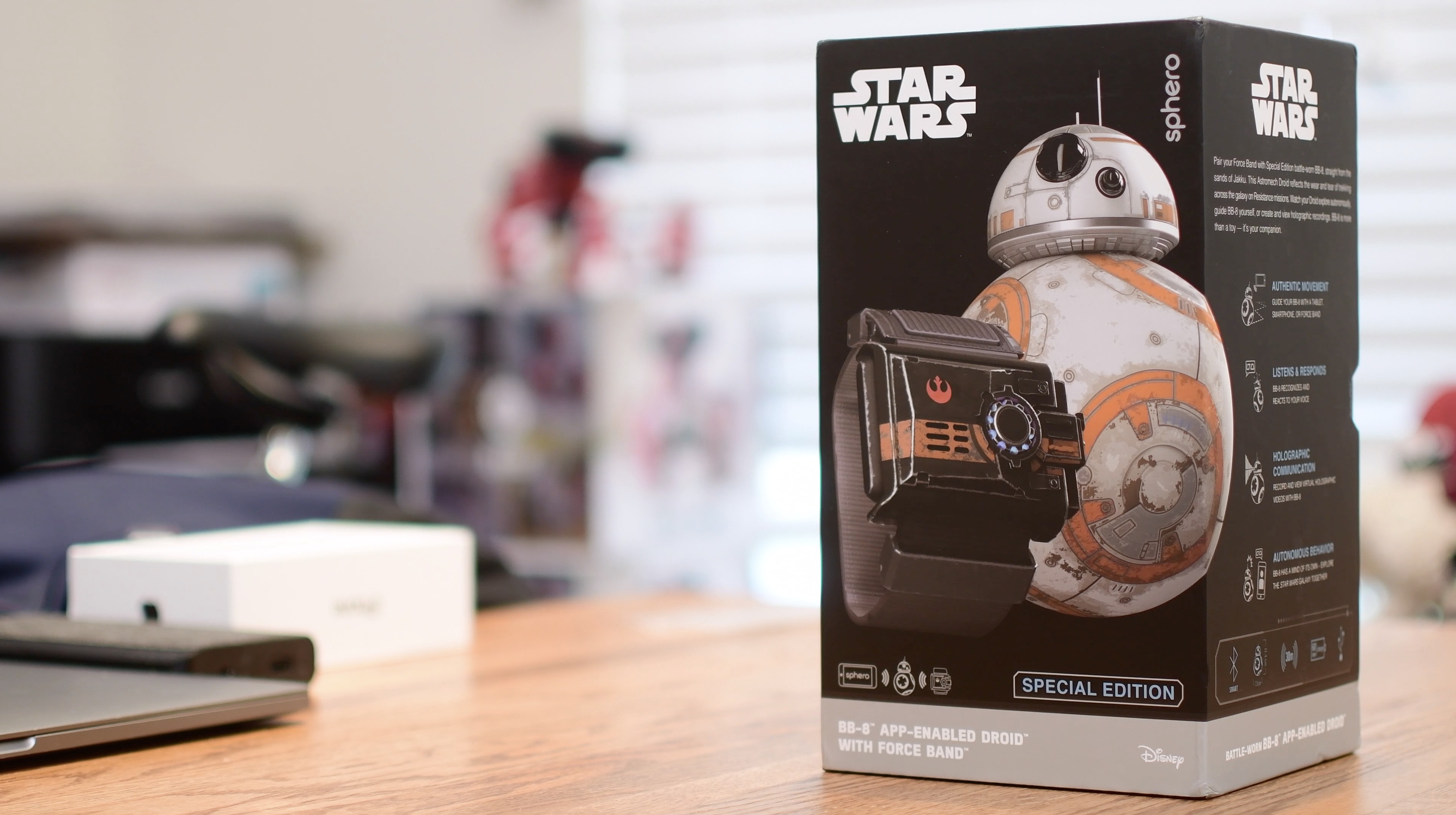 BB-8 stole millions of hearts when he debuted as the new droid-to-love in Star Wars: The Force Awakens. Sphero’s remote control BB-8 was easily the most popular toy that debuted on “Force Friday” preceding the movie, but today we are going to go hands-on with the Special Edition Battle-worn version of BB-8 and the Force Band.

You may know Sphero as the purveyor of cute little remote-controlled balls. We even covered their new Sphero Mini recently! For BB-8, they’ve adopted that same technology to include a special droid paint job, and controllable head. They didn’t just stop there, as there is a ton of Disney magic baked into this simple toy.

For the best look at BB-8, check out my short review video. You can see the droid and the app in action.

Now let’s get down to our favorite robotic friend.

Sphero’s BB-8 is a baseball-sized ball that you are able to control from your phone, or with the included Force Band.

It can drive around on carpet, as well as vinyl/tile/hardwood floors, making it extremely versatile. 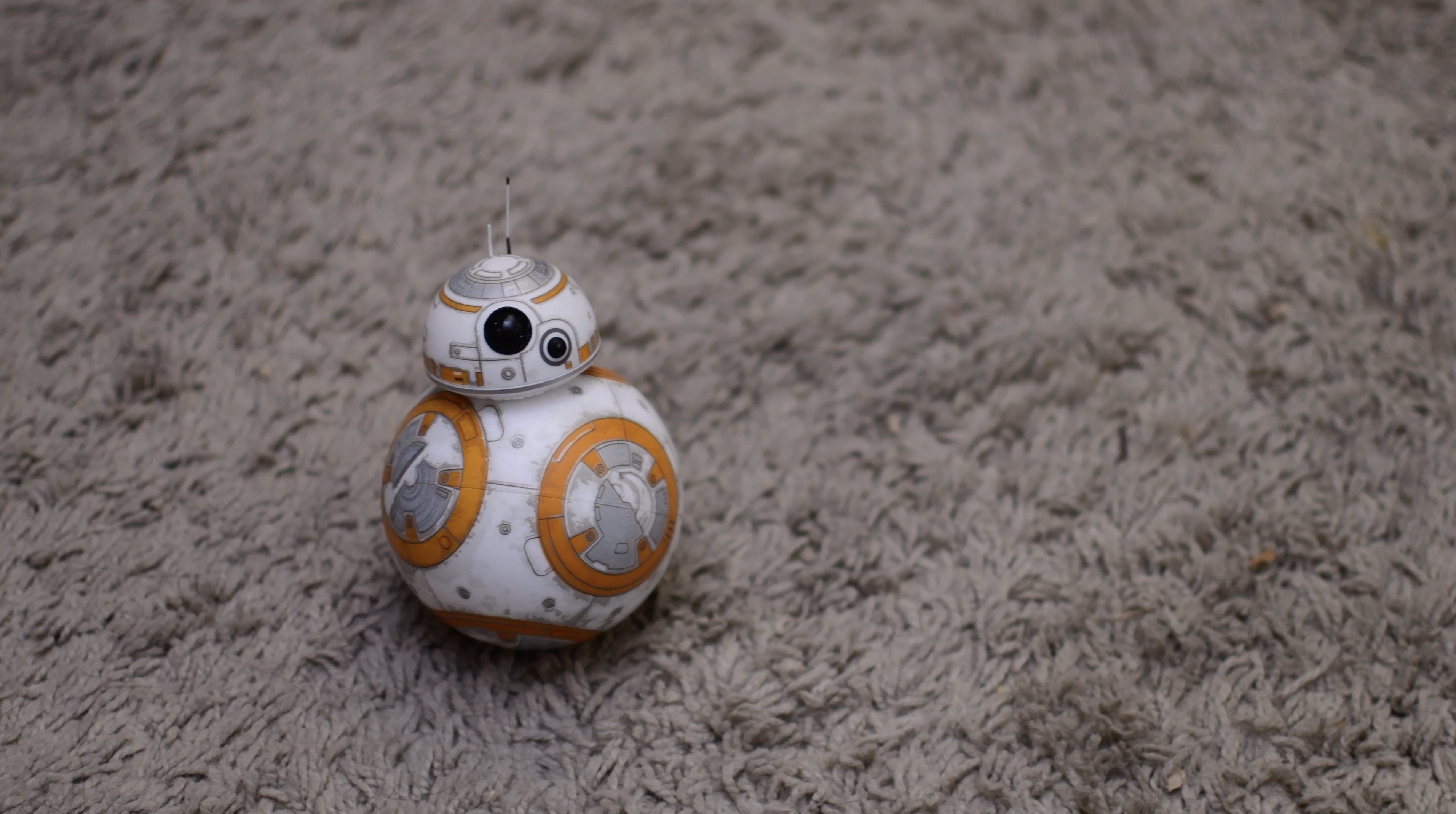 The Force Band easily charges over Micro USB and has an accelerometer and speakers inside. That way BB-8 is able to communicate back to you.

The BB-8 body charges wirelessly with the included docking station that is plugged in via Micro USB as well.

The BB-8 app is chock-full of features that give you endless things to do with BB-8, including different games, driving modes, and activities.

What sets apart the special edition package is that it includes the Force Band (normally a standalone accessory), a special metal case, and a matte battle-worn exterior. 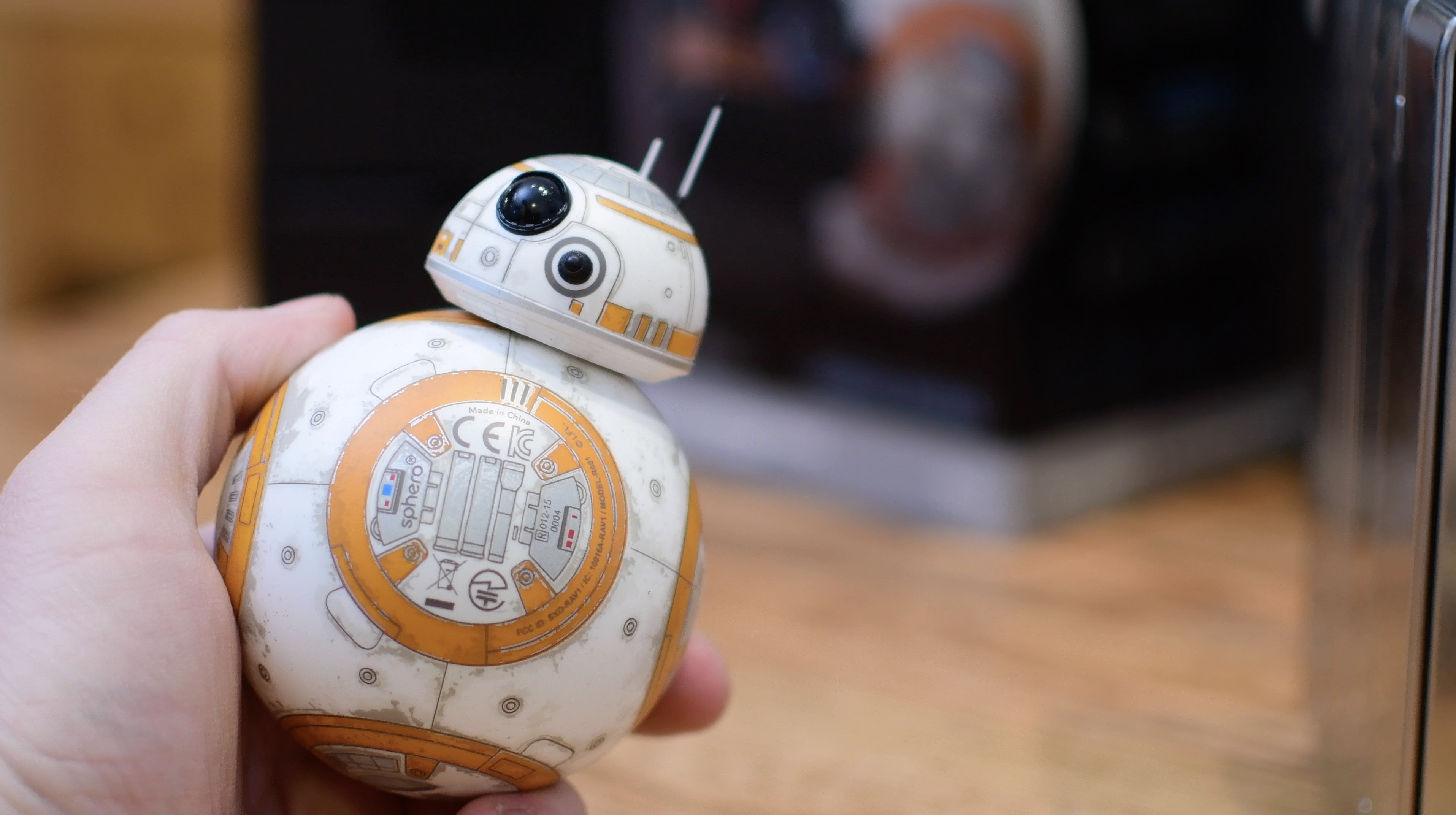 Honestly, I love this matte exterior compared to standard Sphero BB-8. The gloss finish you usually see easily gets scratched or marred and looks poor over time, but this matte version looks and feels much better. 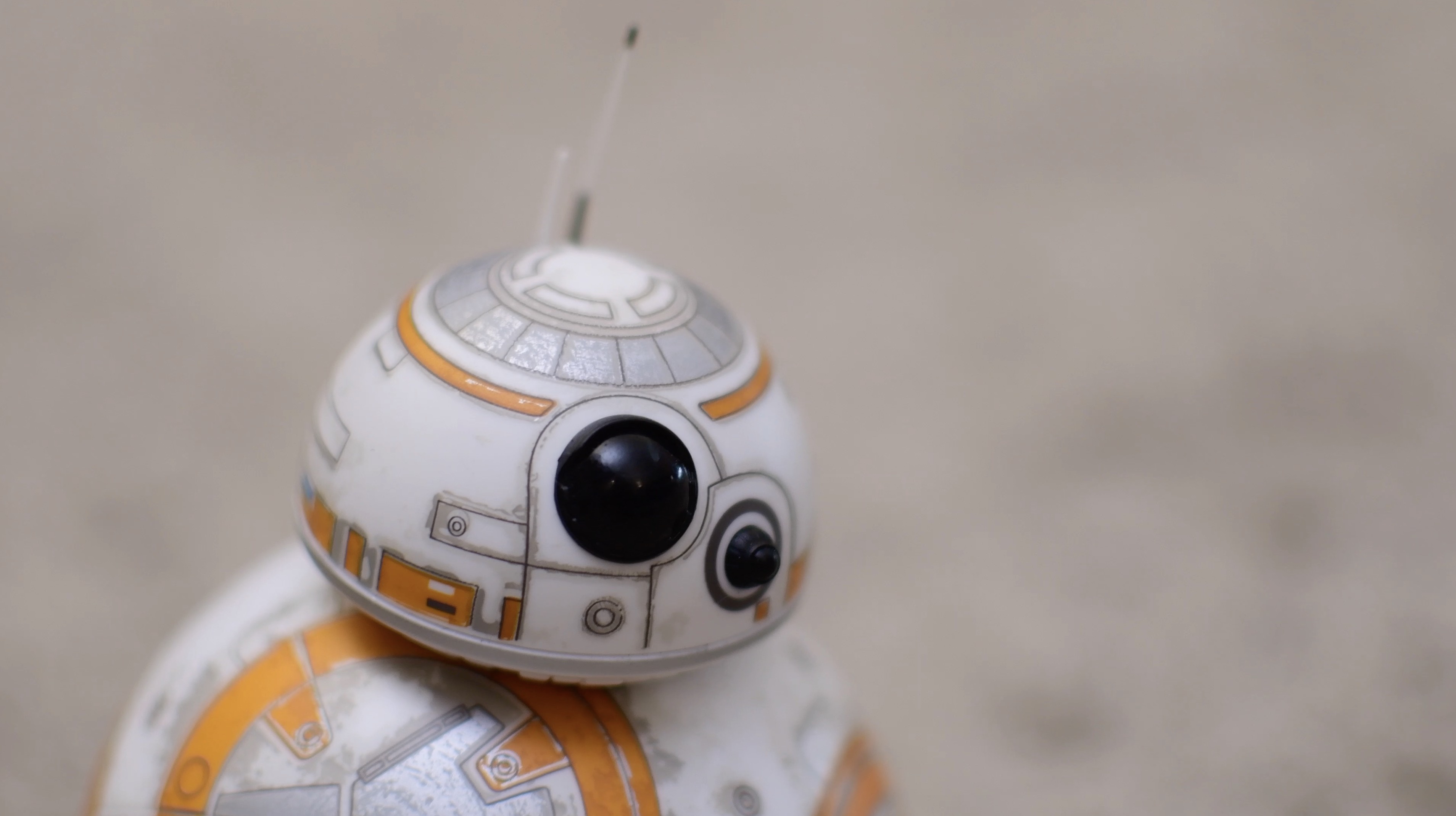 The Force Band has a similar aesthetic, though the light weight of it makes it seem a little more on the cheap side.

I am faced with a bit of an internal debate because I love the display stand, but I also like the metal case you can use for storage. It’s a nice touch. 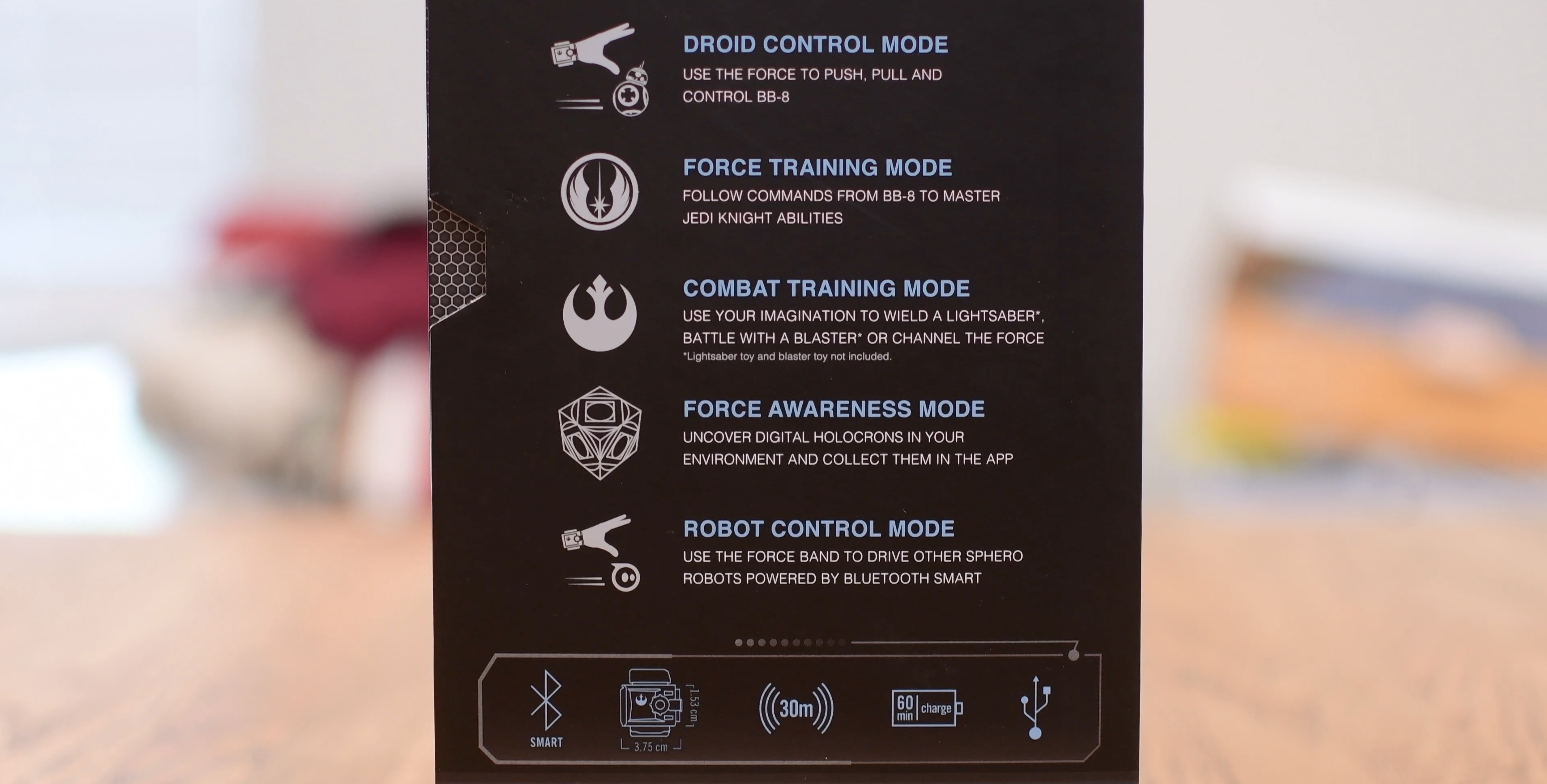 This is where things get fun. There are so many different ways that you can control your little robotic friend. In the app, you have options for:

These all of sorts of little things that make them very cool. For instance, watching the films with BB-8 has him reacting as things happen. Or when patrolling, you can see an activity log, gyroscope status, and more in real time.

Sphero initially released the Force Band several months after the original BB-8. It straps to your wrist, and allows you to command BB-8 with just a simple arm movement. The controls are fairly easy and intuitive, like pulling towards you to tell him to come, and pushing away to make him move away from you.

It is quite adjustable and I can see it fitting most wrist sizes. 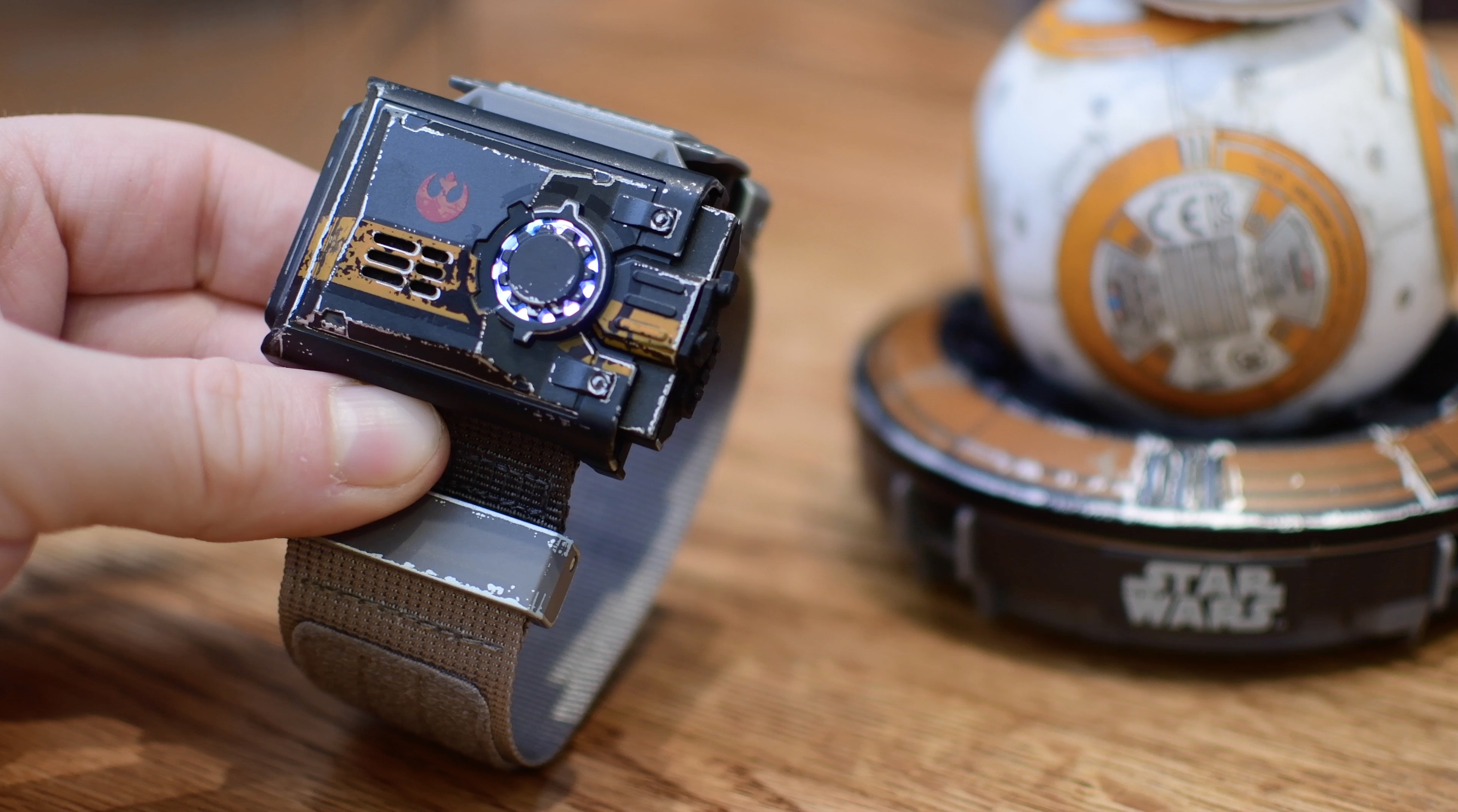 One super useful feature is the fact it can operate BB-8 entirely on its own. No phone necessary. This is great if you want to let a child play with it, but don’t want to give them your phone.

Of course, that autonomy has its downsides.

Updates can take a substantial amount of time. It has to transfer the update, as well as piles of audio files. All of that has to be stored on the Force Band itself instead of your phone.

There are many fun aspects to Sphero’s BB-8. The little touches really complete the experience, and the audio is all spot on.

You can make BB-8 perform all of these different functions like completing a figure 8, shaking his head, and more. 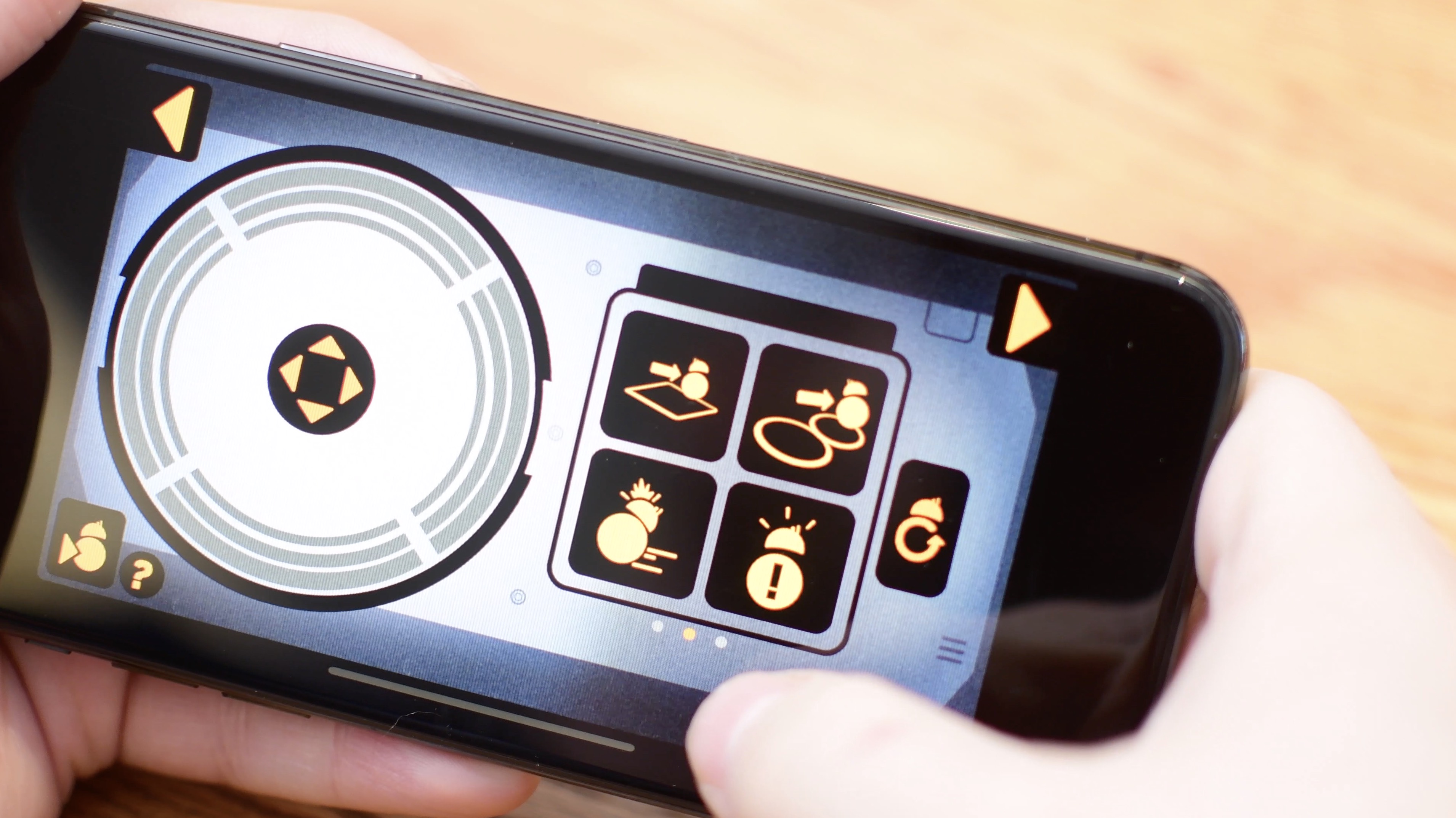 I’m very impressed with how many things Sphero is able to pack into this toy, layering on so many different features through the software to make this a toy that will get lots and lots of use.

Sphero also goes a long way to make BB-8 an education toy as well. Kids can actually learn to code, making BB-8 change his color or control his movements.

There is a drag-and-drop programming environment where it is easy to decide what BB-8 does. A few other examples of programs could have BB-8 change colors every time he runs into something, or draw out certain shapes. There are plenty of ideas and challenges available through Sphero’s website.

BB-8 is the perfect gift for any young Star Wars fans. The special edition version makes it even cooler and something anyone would be happy to display on their shelf. 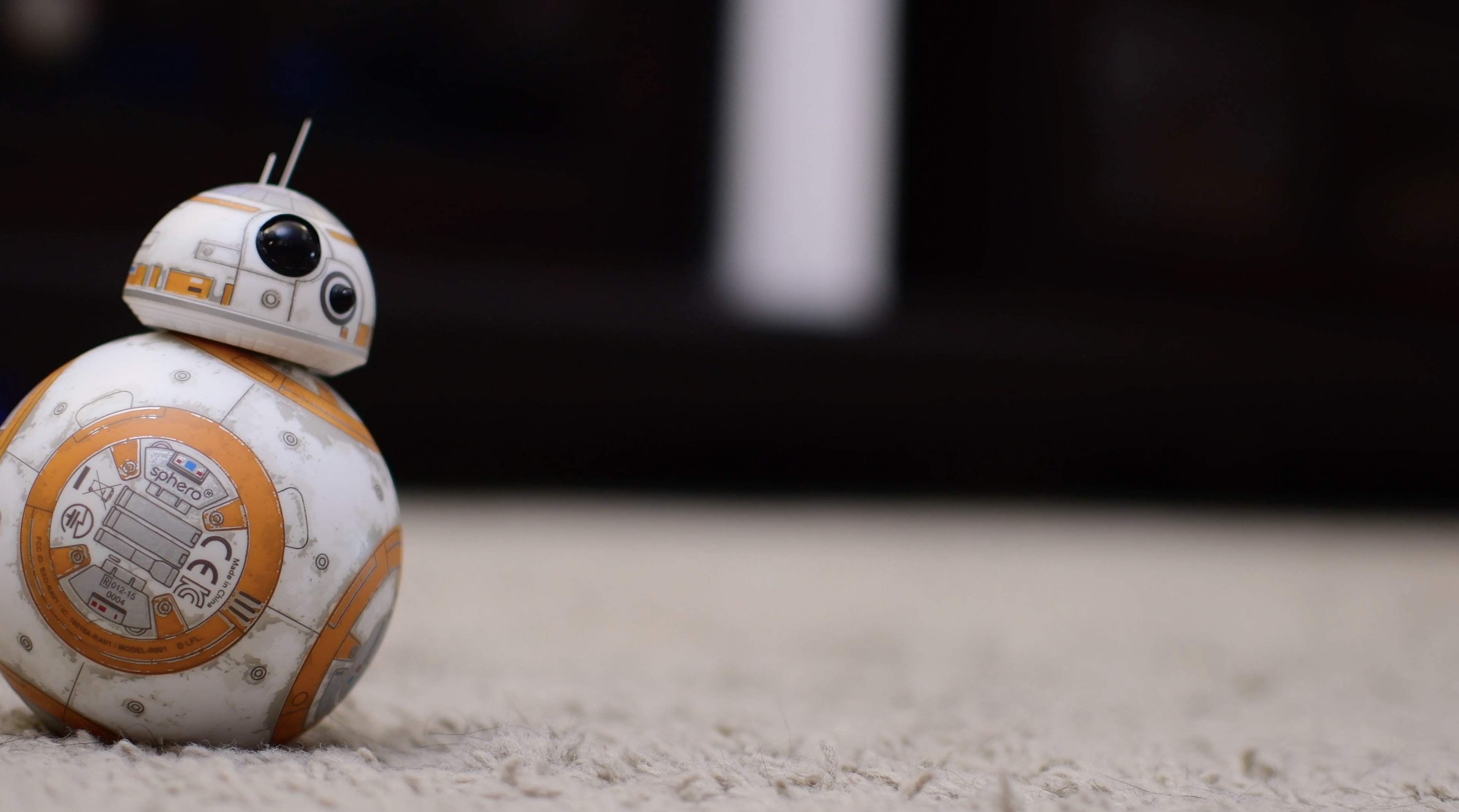 The huge variety of content, features, updates, and education value make this a unique gift that few could object with.

If you are interested in getting one as a gift (or secretly for yourself), you can find them on Amazon. The Special Edition with Force Band runs $199, and the standard model is $128.

Let us know if you happen to pick one up, down below in the comments.