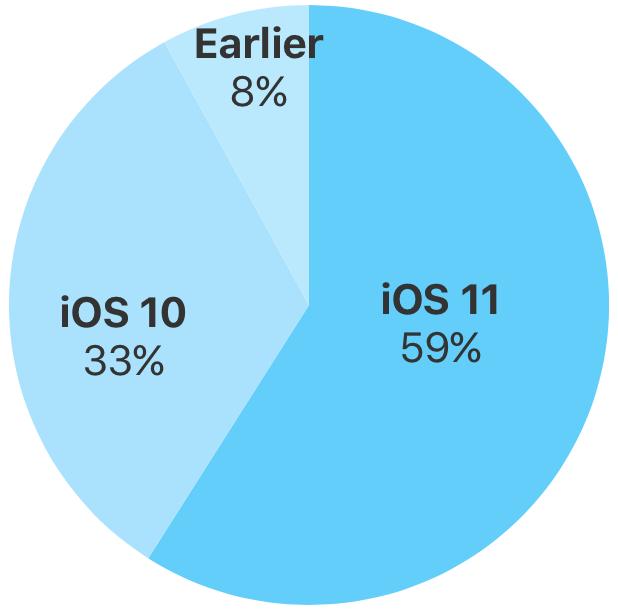 As per Apple’s official stats available on its App Store webpage, the various iOS 11 versions are now installed on 59 percent of compatible iPhone, iPad and iPod touch devices in the wild.

That’s a difference of seven percentage points versus the adoption rate of 52% that Apple officially reported on November 6. In other words, Apple’s latest and greatest operating system went from being installed on 52% to 59% of compatible devices in less than a month.

Of course, this is in large part thanks to iPhone X, which hit store shelves just as Apple was wrapping up its previous App Store stats. As for older iOS editions, iOS 10 is now on 33% of devices and earlier versions continue to power 8% of active devices in the wild.

The latest stats were measured by App Store on December 4, 2017.

Although iOS 11 has not been adopted as rapidly as iOS 10, it would be unfair to blame that on bugs (bugs come with any software, they’re a fact of life) or supposed lack of new features (in fact, iOS 11 is one of the more feature-packed releases in years).

Realistically, the somewhat slower rate of iOS 11’s adoption can be easily explained by the delayed iPhone X launch coupled with the fact that iOS 11 cuts off older hardware like iPhone 4s, iPhone 5 and iPhone 5c.

Meanwhile, Android 8.0 Oreo was installed on 0.3% of compatible devices, according to Google’s official numbers derived from Play Store logs collected during a 7-day period ending on November 9, 2017.