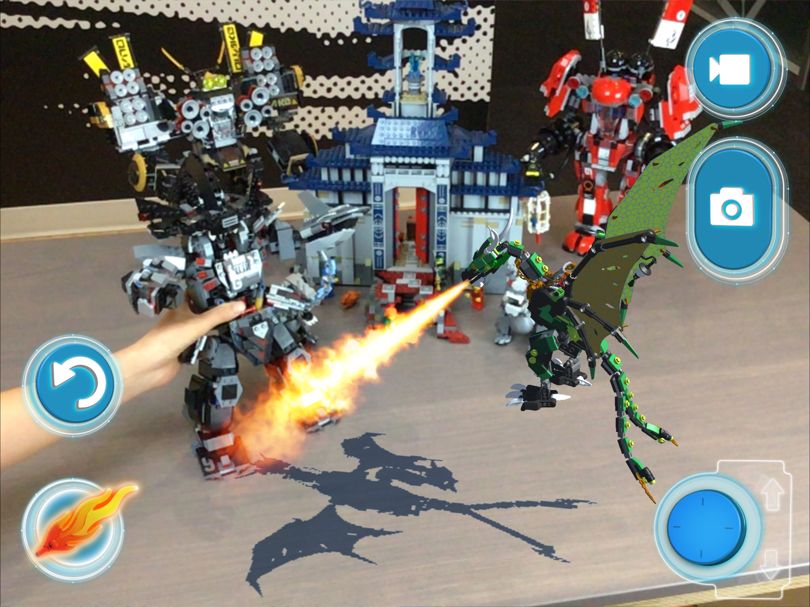 The new AR Studio app takes advantage of Apple’s ARKit framework in iOS 11 designed to make it easy for developers to create immersive augmented reality experiences on iOS. It comes with virtually-enhanced animated versions of some of Lego’s most popular block sets.

Thanks to augmented reality, the digital blocks can be mixed with physical models.

Children can then fly their virtual models around the room as they try to locate special golden blocks hidden around in the augmented reality environment. While playing, kids can also activate a virtual dragon breathing fire, trains sounding a horn, a Lego firetruck and more.

According to Wired, the app will include six digital sets at launch, including the police station, train set and fire station, as well as a variety of the Ninjago models like the Green Dragon 70593, Cole’s Mech 70632 and Destiny’s Bounty 70618.

Those virtual bricks are, of course, also available to buy in your local LEGO store.

The app’s digital sets are, according to Lego’s Tom Donaldson, “very close to the real set and are intended to help you explore how you’d play with the real set if you did go out and buy it.”

Kids can record their favorite bits in short video clips, the report noted. AR Studio was developed in-house by the Lego Group’s Creative Play Lab. It’s only supported in iOS 11 and above and there’s no word when it might land on Android.

The Lego AR Studio app will release later today so keep your eyes peeled and stay tuned to iDownloadBlog as we update this article when AR Studio launches on App Store.