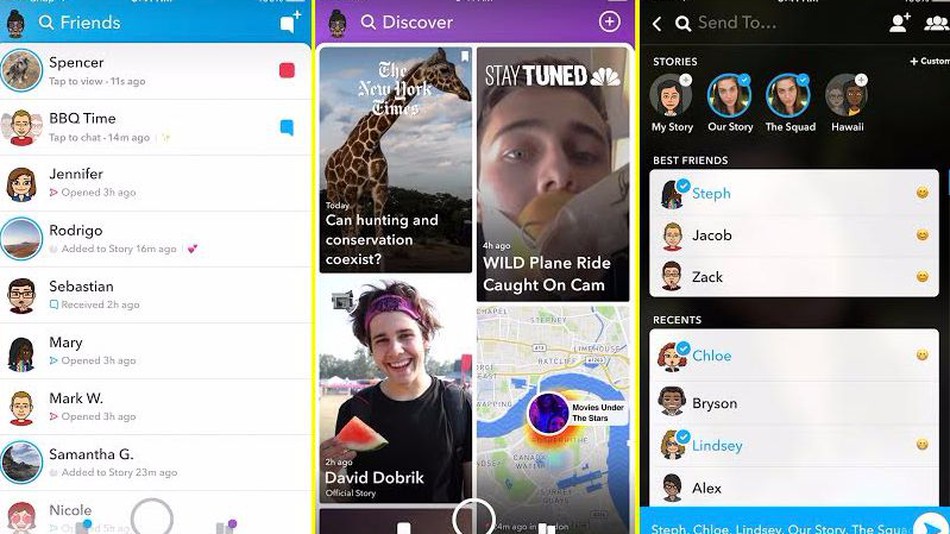 Snapchat on Wednesday showed off its thoroughly redesigned mobile app, redone from the ground up and now organized around your relationships and friends.

The new Snapchat is personalized just for you while separating the social from the media, as well as your best friends from branded content.

“Until now, social media has always mixed photos and videos from your friends with content from publishers and creators,” said Evan Spiegel, co-founder and CEO of Snap, Inc.

“While blurring the lines between professional content creators and your friends has been an interesting Internet experiment, it has also produced some strange side-effects (like fake news) and made us feel like we have to perform for our friends rather than just express ourselves.”

Your subscriptions now live at the top, followed by other Stories you might be interested in watching. Chats and any Stories from your friends are now on the left side of the interface, with the Stories from publishers, creators and the community are separately available through the revamped Discover page on the right.

The redesigned app will go live later this week for a small subset of Snapchat’s user base ahead of a wider release “in the coming weeks.” The hope is that the fresh new look will help the company attract and retain new users at a time when Instagram has been shamelessly ripping off best Snapchat features.

Just yesterday, for instance, Instagram unveiled a new Remix feature for replying to friends’ photos with stickers, drawings and text, one of the marquee Snapchat features.

Snapchat keeps adding features to its own app, too. A few days ago, it rolled out a photo-recognition capability that provides content-aware stickers and borders which automatically appear as the app attempts to detect what’s in your photo.

Learn Snapchat is separating social from media in Evan Spiegel’s op-ed on Axios.