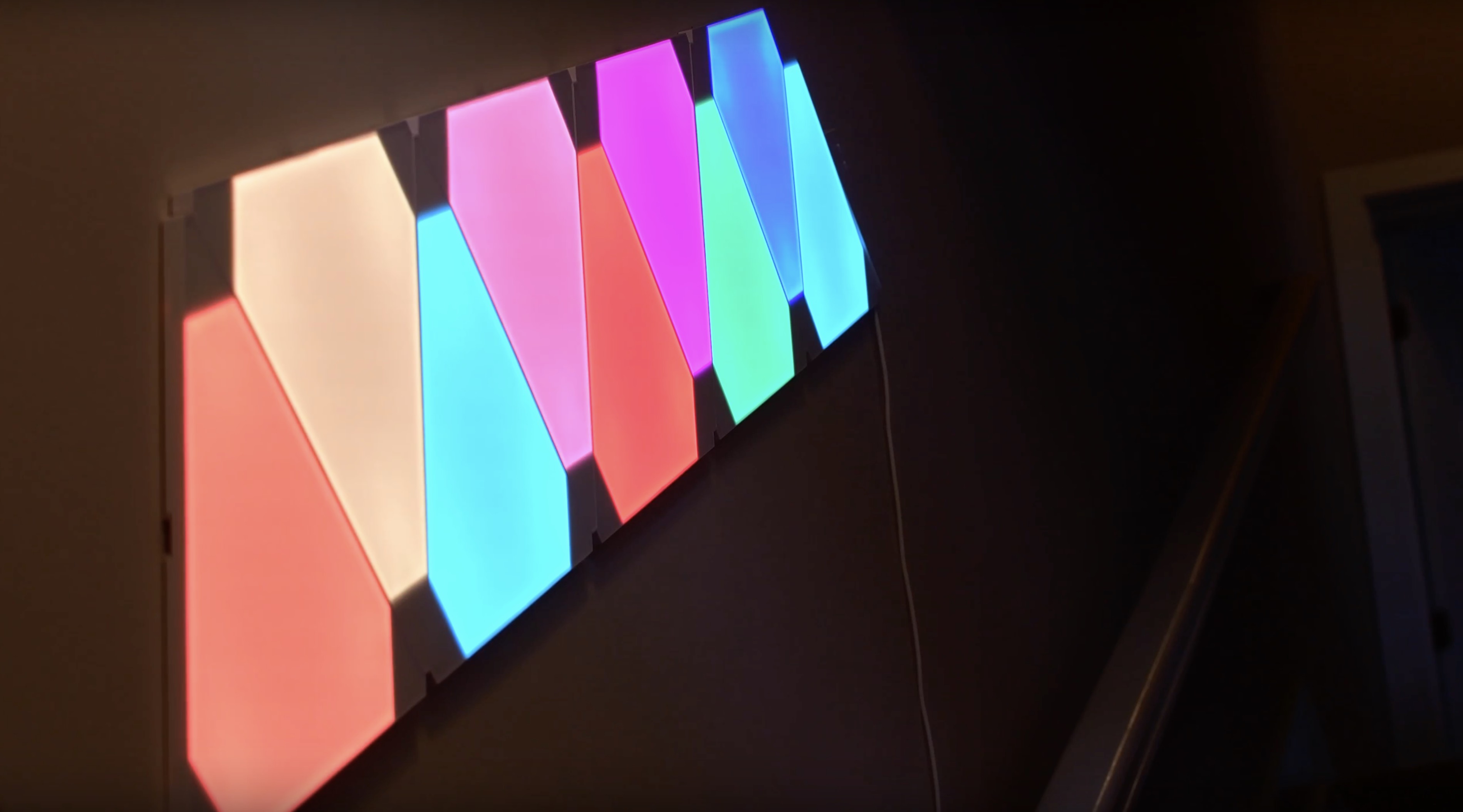 I’ve tested many HomeKit lighting solutions, though nothing quite like the Nanoleaf Aurora. It is a collection of triangular LED panels that you can arrange into any shape you can think of, only limited by the number of panels.

The limitless animations and color combinations makes this one of the most fun and attention-getting pieces of decor you can add to your home. Check out our hands-on video to see the different animations and color schemes for yourself. Then read on for our in-depth review. 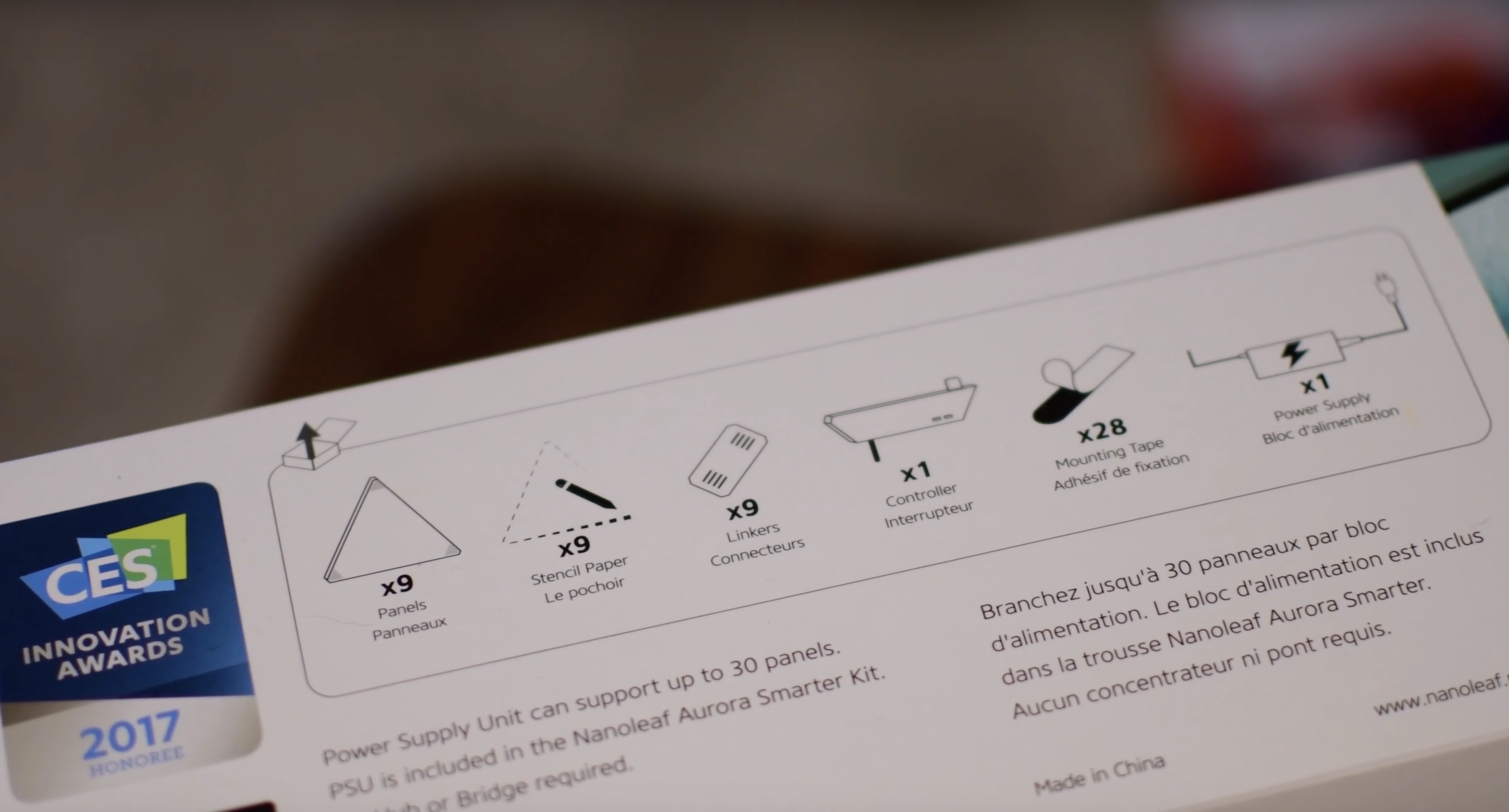 There are quite a few pieces and parts inside of the box. Since this is a bit of a DIY setup, you have everything from the lighting panels themselves, to the mounting hardware. In the basic starter kit, you will find:

Nanoleaf seems to have thought of everything when it comes to the Aurora. You don’t necessarily want to have to mount the Aurora multiple times if you don’t have to, so they include a set of stencils for you to try out your placement first. I laid my stencils out on the table first to figure out what shapes I could create, before deciding on a simple option that mirrored the railing on my stairs.

I then taped the stencils up on the wall in the correct placement. It is a whole lot easier to move taped up stencils than a mounted light. I then started replacing each stencil panel with the real ones. 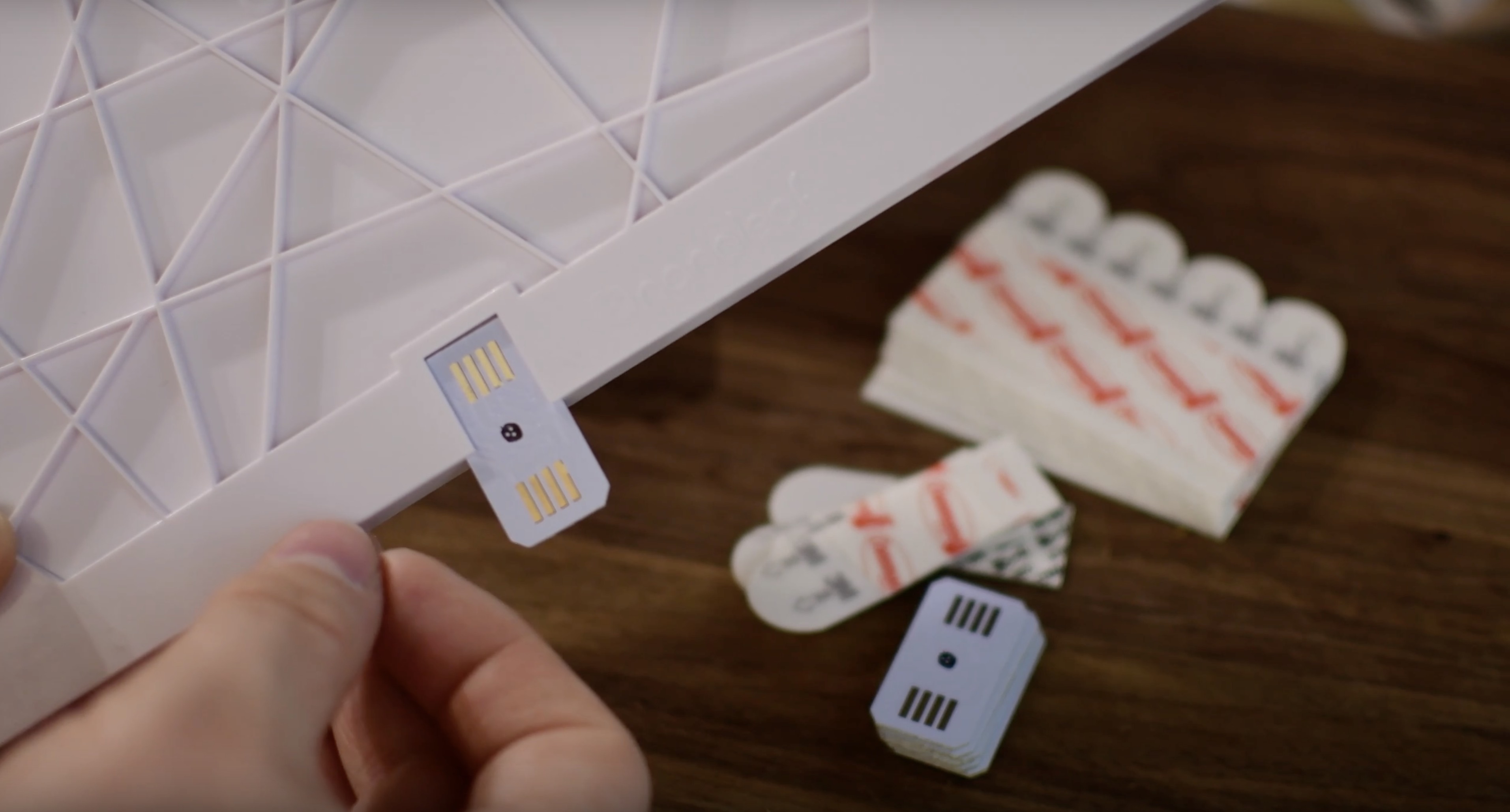 Each of the individual panels connects to the panels next to them via a small little link. They slide into any one of the three sides on each panel, then into the one adjacent. On any panel you can also mount the controller which provides power and physical controls to the whole setup.

Using the command strips is a bit tedious, and can be somewhat of a trick to make sure none of the tabs are visible. I just made sure to work my way backwards towards where I planned to place the controller, which each new panel, covering the tabs of the previous panel, and the controller covering the last one.

The power simply plugs into the controller, which offers a “next” button to switch between scenes, and a power button. On the underside, you will find the HomeKit pairing code to add your HomeKit setup.

Most HomeKit accessories just deal with turning on/off and maybe a color selection. The Nanoleaf Aurora is a bit different, as the lighting can be more detailed. They have different animations, layouts, and transitions. Unlike other HomeKit accessories, to get the most out of the Aurora, the manufacturer app is necessary.

As soon as you have it powered on and paired with the app, it will automatically detect the layout of your Aurora panels. This is a great time saving feature to prevent you from having to relay your layout to the application. 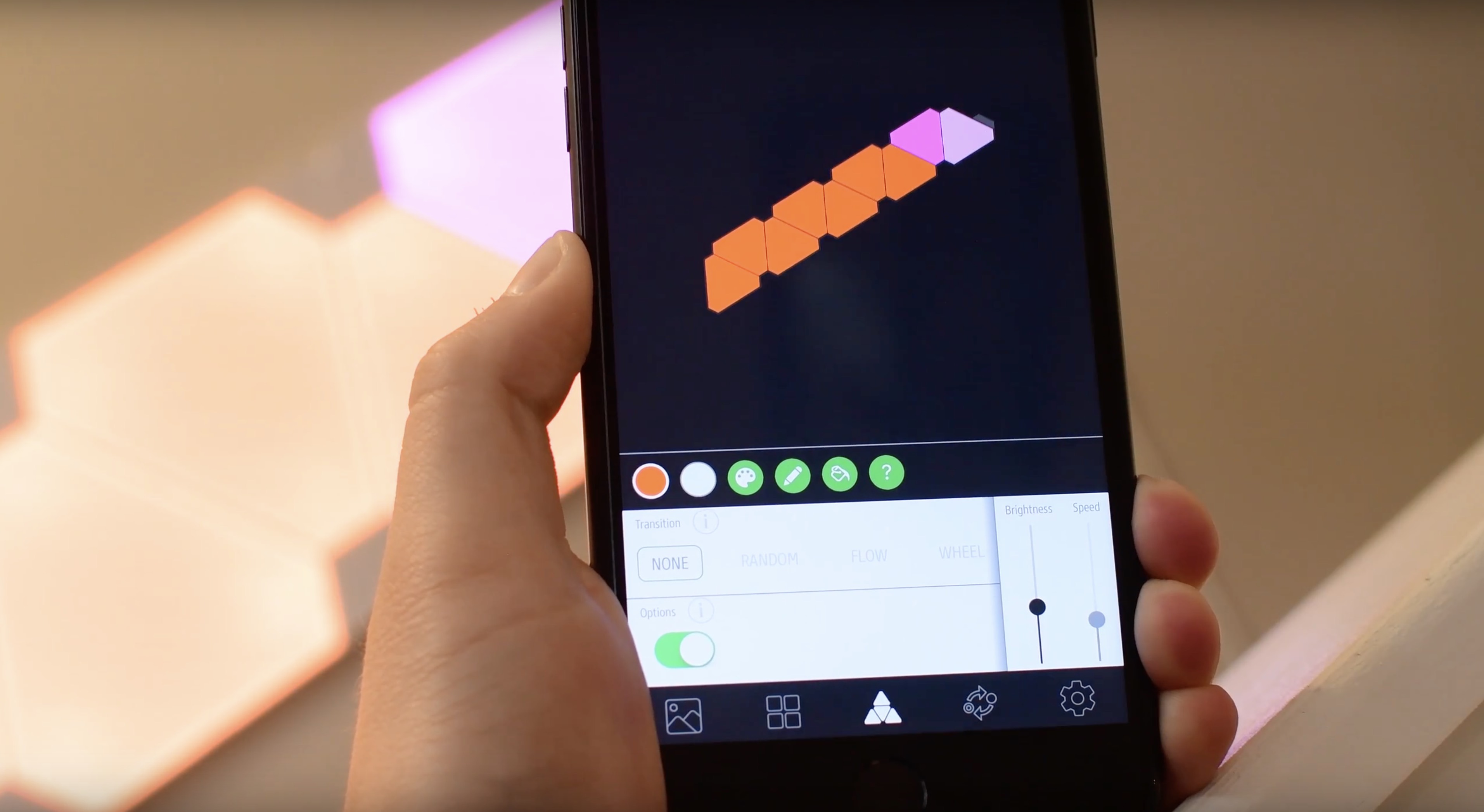 In the app you can choose the color of each panel individually, the brightness, set the speed of each animation, animation direction, repeat preference, what kind of transition it makes, and download new scenes from other users.

The transition types include: 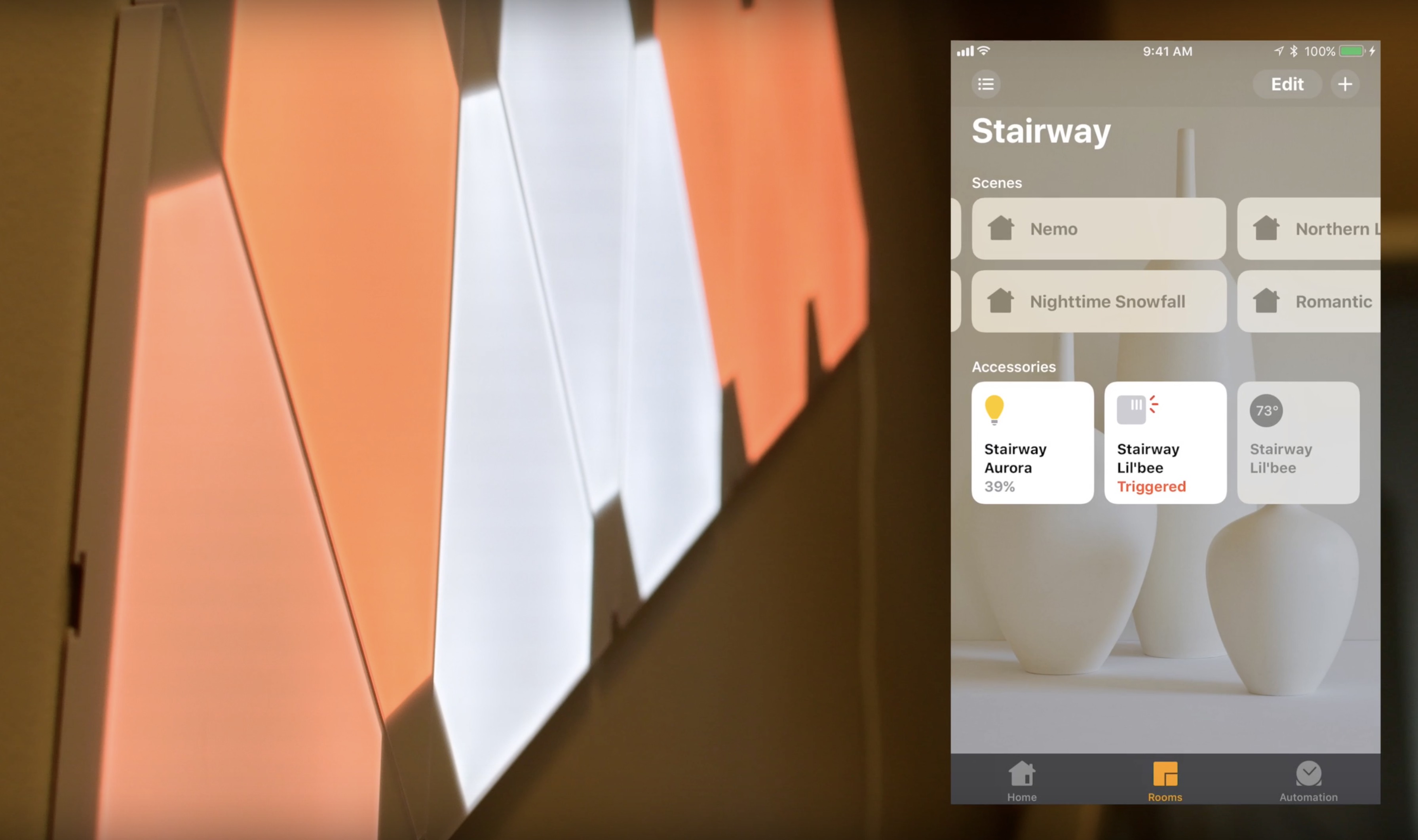 Speaking of HomeKit, it has all the usual features of a HomeKit light. You can automate, control with Siri, schedule, etc.

One big limitation is that you cannot create the complex scenes that you can create through the Nanoleaf app. The good news is there is a workaround. Simply create the scenes in Nanoleaf, and they will become available in HomeKit. I can set up an elaborate lighting animation through Nanoleaf, then use the Home app to automate it with HomeKit. You can even use Siri to invoke these scenes. It is a bit tedious, but not horrendous. The issue lies more with HomeKit than Nanoleaf, and they do an admirable job in making it as palatable as possible.

Within the Home app you can still control the brightness and power state of the Aurora. You can also change the color, but you have to change the color of all the panels at once, not individually. Since I have mine on the stairwell, I have a series of animations, based on time of day, all tied to a motion sensor. In the morning, the lights animate a sunrise. Throughout the night, it will turn on and animate a dark blue sky with a twinkling light. During the day, it is brighter and more colorful. 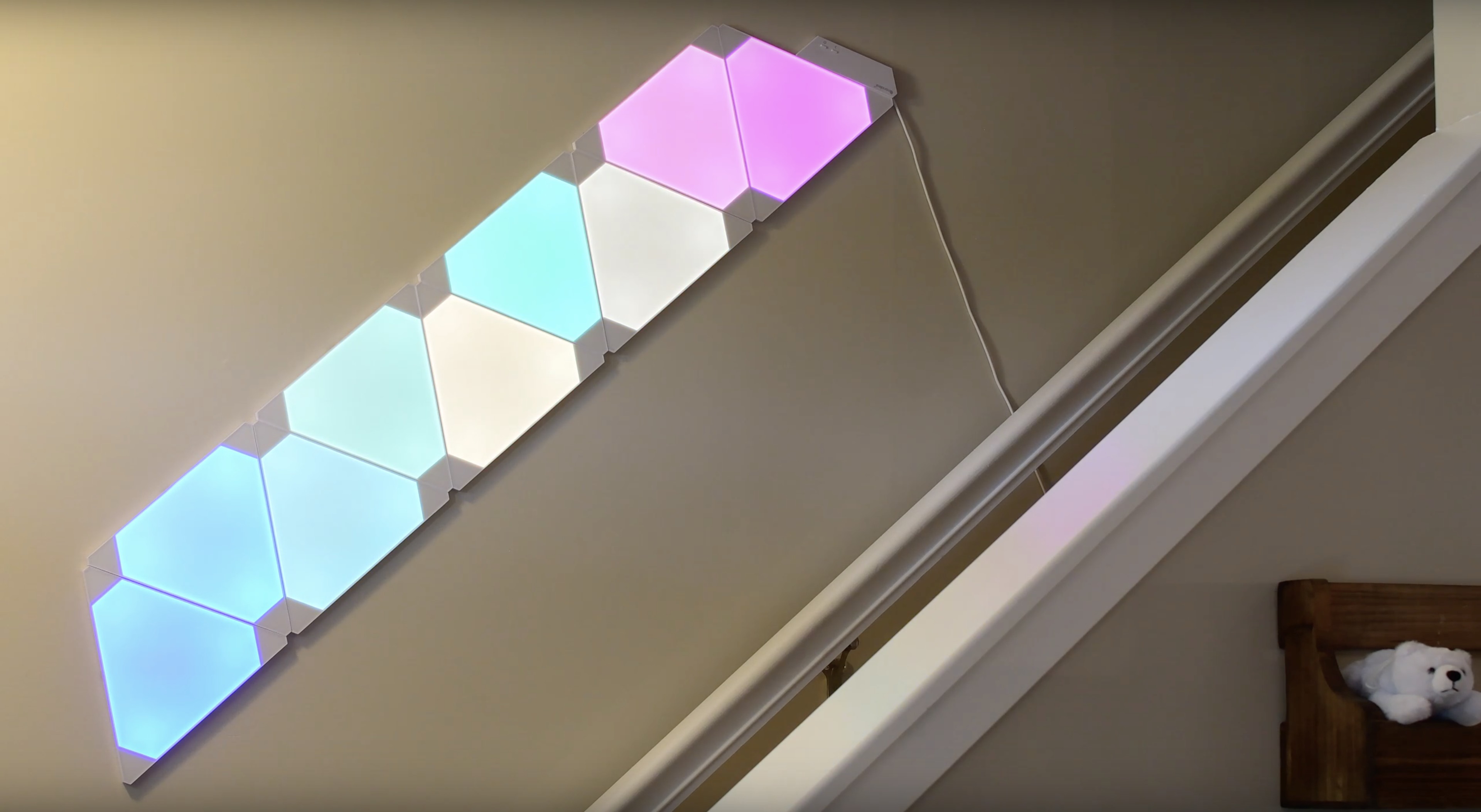 I’ve become quite enamored with the Aurora in my time with it. I already want to pick up a second one to arrange in a different pattern above my desk, and get some additional panels to expand the scenescape going up my stairs. There are limitless options for setting up the lights, which is something you can’t say for too many lights out there, let alone smart HomeKit lights.

Competition has grown since release, with LifX adding HomeKit support to its lights, as well as releasing two similar solutions in the forms of square tiles, or elongated rectangular beams. Those are still on preorder, so at the moment, Nanoleaf still has the edge. It remains to see how the LifX solutions compare.

The starter kit is available on Amazon for $199 and includes nine panels to get you going. Additional panels are available in packs of three for $79.