iPhone 8’s OLED display will have a cutout at the top to accommodate the camera, earpiece and sensors. Brazilian developer Guilherme Rambo has now discovered exactly how a rumored new split status bar will animate between all the various states it can take.

In one example, based on the leaked firmware files, connecting the device (iPhone 8) to a charger makes the power indicator on the right side of the split status bar disappear while the familiar charging icon swooshes into view and hides the WiFi and signal bars.

There's a nice little animation when you connect it to power pic.twitter.com/GFimRxbCAm

As noted by 9to5Mac, when apps use navigation bars the title bar content will be pushed downwards to stay out of the way of the notch region.

iOS developer Steven Troughton-Smith has discovered, using iOS Simulator, that iPhone 8 will also animate the split status bar when an app is recording or actively tracking your location, replacing the previous rather thick bars running across the top of the display.

Here’s what the ‘double height’ statusbar looks like — screen recording, or in-call. The ears are interactive pic.twitter.com/bdacrEYMCw

He says that on existing iPhones the status bar becomes double-height and displays a textual message to inform the user that the app is recording or tracking their location.

Bad news: the dumb deep link back indicator doesn’t seem to be going away pic.twitter.com/DlNvkaPkRA

Fun fact: Apple internally refers to the split status bar as “ears”. Notch graphics is even displayed in the Control Center of watchOS 4 on the iPhone ping button, as shown below. 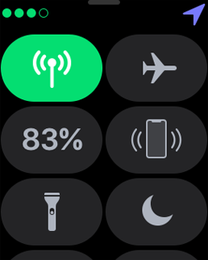 Keep in mind that these are simulated animations so we’ll have to wait until iPhone 8 becomes official to see how it all comes together. What I’d like to know is how the split status bar will change when you use the device in landscape orientation, especially when watching movies or using apps that take over the entire screen.