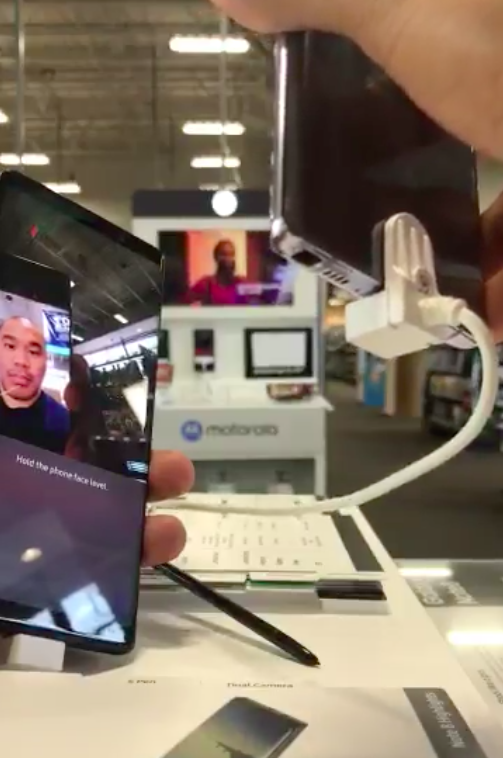 Galaxy S8’s face scanner via the front-facing camera can be easily tricked by scanning a user’s photograph and now we learn that Note 8’s facial recognition system is no better.

As noted today by 9to5Mac, developer Mel Tajon on Saturday posted a video showing potentially fooling Note 8’s face scanner via a selfie captured on his phone. All a person in possession of your Note 8 would theoretically need to do is open your Facebook profile on a phone and hold it in front of the Note 8’s front-facing camera.

It’s also possible that this is a demo phone set to unlock when it sees any face.

Demo or not, it’s already established that Galaxy S8 can be unlocked by a picture of your iris and the new Note does not provide any advances in terms of the facial recognition system.

“I’m also able to unlock Samsung’s Galaxy Note 8 with people’s Facebook profile pictures and Instagram selfies from my iPhone,” the developer tweeted today. Samsung itself states that neither Galaxy S8’s nor Note 8’s face scanner could be used for Samsung Pay, practically acknowledging that the feature could be easily defeated.

Apple’s iPhone 8 is expected to use infrared 3D sensors and time-of-flight measurements to build a detailed 3D mesh of a user’s face. The system is said to capture more data points than Touch ID, making it more secure than Apple’s fingerprint scanner. “It can scan a user’s face and unlock iPhone 8 within a few hundred milliseconds,” as per Bloomberg.

I think people will be surprised just how reliable and accurate Apple’s Face ID system is.

Because the Cupertino giant has worked hard to get banks on board for Apple Pay, and given the rumored lack of the traditional Touch ID fingerprint reader on iPhone 8, there’s not the slightest chance that the company is going to ship a less secure authentication system.