Voice actress Susan Bennett revealed tidbits about becoming the voice of Siri in an interview with CNN back in October 2013.

In a new interview published Friday by Typeform, she offered some additional information about the origins of Apple’s virtual assistant, provided an insight into how the process of recording Siri voices worked, why she passed on a five-year contractual offer from the iPhone maker and more.

Bennett was hired as the official voice of Siri after the actor who was scheduled to audition for the role didn’t show. Because Apple was very secretive, she thought she was recording voices for an automated switchboard system.

It wasn’t until she recognized her own voice when a friend of hers played with Siri on his iPhone that she realized Apple had chosen to use her voice recordings for Siri.

I was really, really flattered to have been chosen, but the negative and troublesome thing about it is, those of us who’ve done all kinds of voice jobs, when we do things like phone messaging, informational things, GPS systems, that kind of thing, people don’t really notice the voice, because they’re listening for the information they need.

But when you suddenly take that anonymous voice, and it becomes a persona like Siri, that people are interacting with, and basically think of as a person, then suddenly you are that person. And we humans really do love to stereotype people, so once you’re identified as the voice of Siri, it’s like ‘She’s Siri, she can’t do anything else.’

The process of recording Siri voices is called concatenation.

They basically recorded a range of words, phrases and sentences that the system would combine into whole new words without requiring Bennet to record every single Siri response. Here’s some of the gibberish she had to utter during recording sessions:

“We were recording for a text-to-speech company and this was brand new to us,” she explained. “We had no real idea of what we were doing. We thought we were doing new scripts for phone systems.”

Ultimately, they ended up recording hundreds of phrases and sentences to get all the sound combinations in the English language. “The English language has over a million words, so you can imagine how long this took,” she said. The original Siri was “the first concatenated voice to actually sound human,” she added. 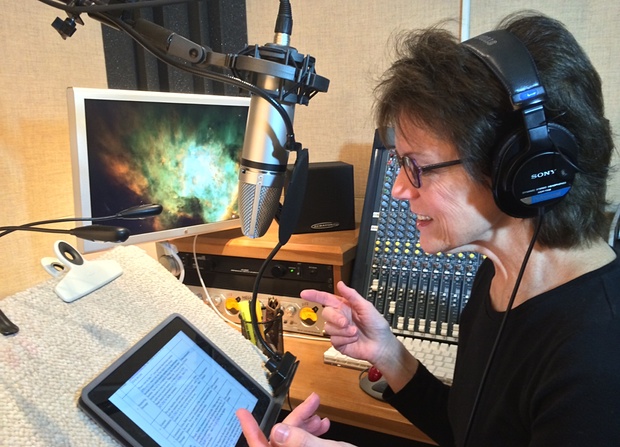 Susan Bennett is the original American female voice for Siri.

They first started capturing her voice back in 2005, before iPhone even existed.

The process took a month, then they did updates for four additional months in 2011 and 2012. They would spend four hours per day, five days per week in a recording studio. To reiterate—Susan had nothing to do with what Siri actually says thanks to Apple’s system which would combine her recordings on the fly to produce various responses.

According to Bennett, Siri’s  witty personality and snark responses have helped popularize the feature. “Before Siri, concatenated voices sounded very robotic—not the type of voice that anyone would want to interact with,” she said.

Some of them include Jon Briggs, who is the voice of The Weakest Link show and Siri’s first male British voice, and Karen Jacobsen, better known as the “GPS girl” and the official voice of Siri in Australia.

Here’s a TEDTalk video of Susan discussing how Siri was created and how she dealt with the fear of living up to the expectations of Siri.

Ultimately, Susan refused a five-year contract that Apple offered to her because the whole process of recording Siri voices was “the complete opposite of creative.”

From iOS 7 onwards, all of the original Siri voices were replaced on new iPhones.

“I kind of got the best of both worlds because I was the original, and I do get to promote myself, and when Siri starts leading us all into the sea it won’t be my voice,” she said.

Apple never acknowledged that Susan was Siri’s voice nor have they ever paid her beyond the hourly wage in the recording booth. The job, however, did help propel Susan’s career as she now does a lot of appearances at conferences and meetings.

The whole audio interview is fascinating so listen to it when you have time.