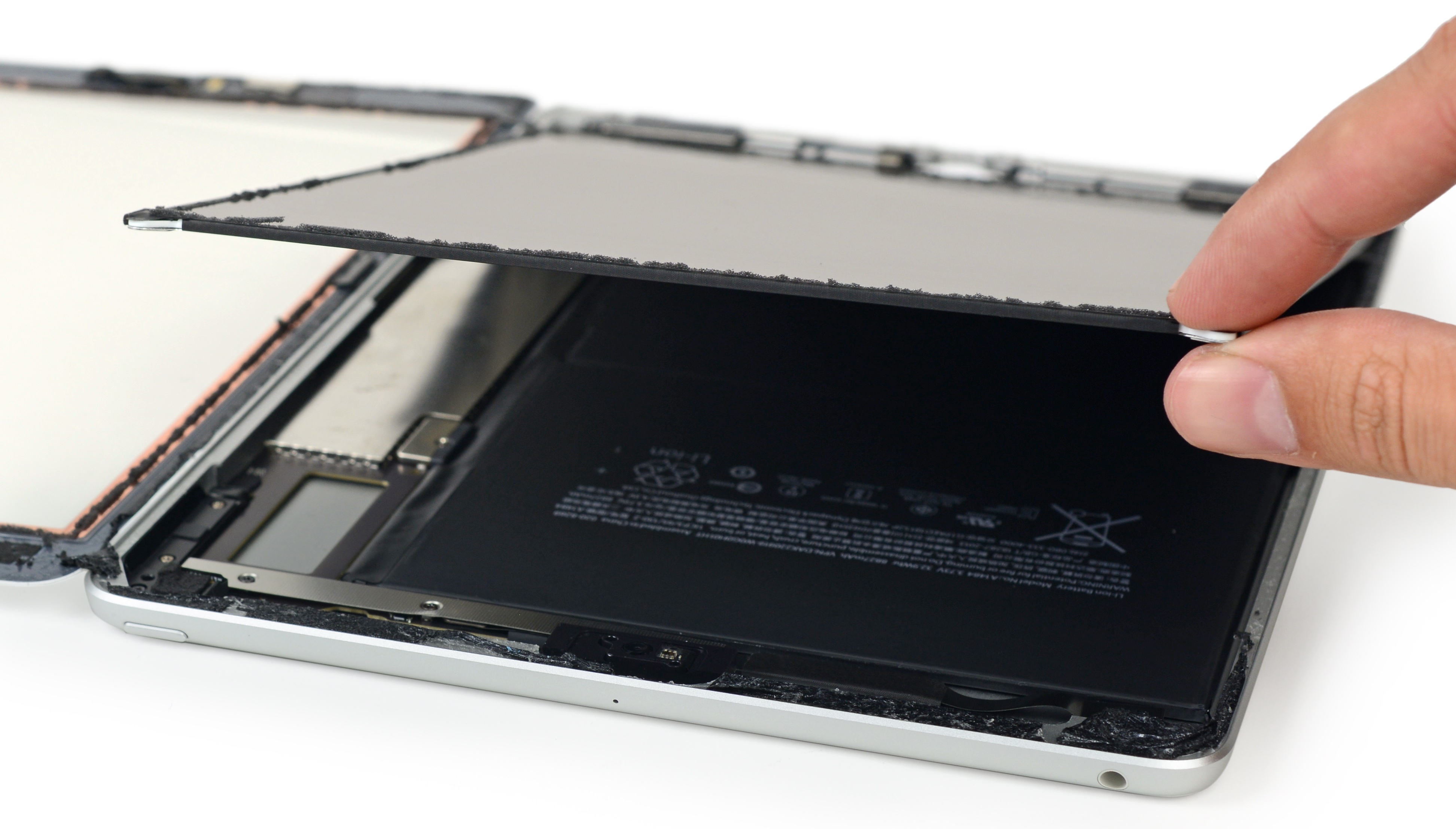 Repair experts over at iFixit tore apart Apple’s new iPad with a brighter 9.7-inch screen. What they discovered doesn’t come as surprise: the canonical iPad is basically an original four-year-old iPad Air with a more repairable screen and some new jewelry in the form of Touch ID, Apple Pay, Apple’s homegrown third-generation 64-bit A9 chip with the embedded M9 motion coprocessor and other minor updates.

For starters, the headphone jack on this new iPad (model number A1822) is still intact. 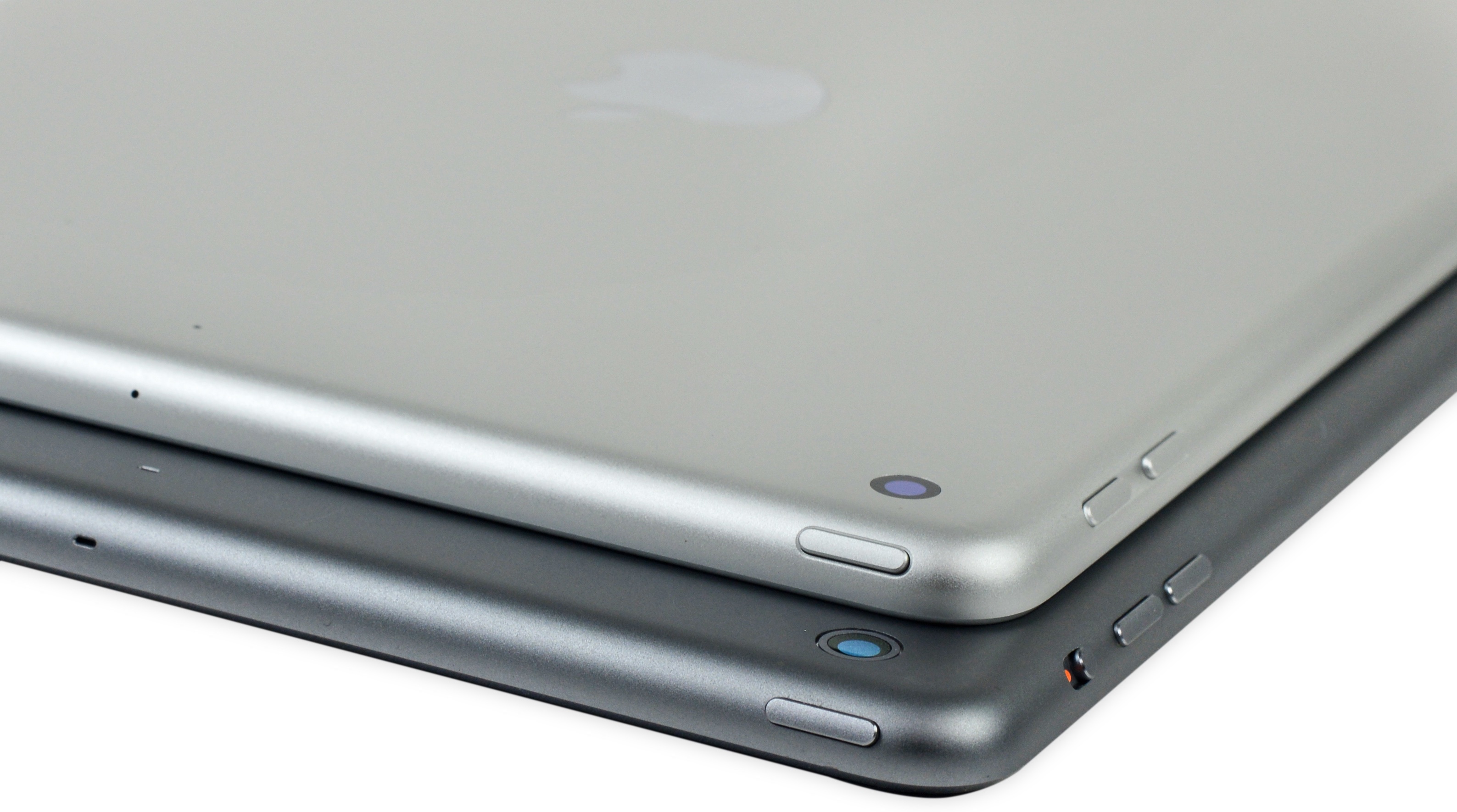 The 9.7-inch 264ppi Multi-Touch Retina display has the same 2,048-by-1,536 pixel resolution like all 9.7-inch Retina iPads. Unlike iPad Air 2’s display, it non-laminated so you’ll see a gap between the cover glass and the panel, meaning image quality may be slightly reduced due to light refraction.

Here’s a look at the device in X-ray glory, courtesy of Creative Electron. 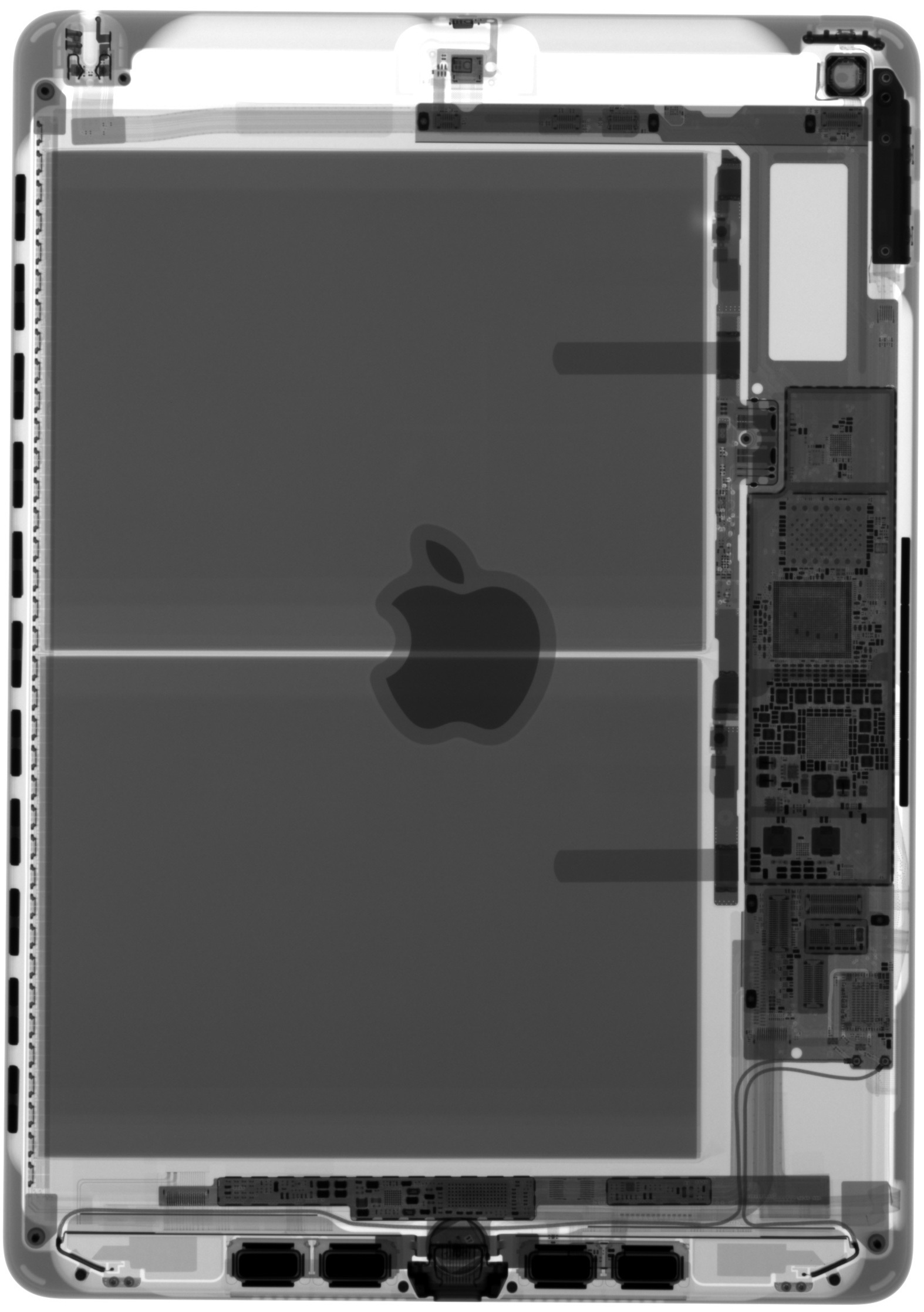 The differences between this iPad and iPad Air 2 include:

The digitizer and LCD from the original iPad Air fit in this new iPad, but iFixit needs more time to determine if they actually work. Like with other iOS devices, the Touch ID sensor is uniquely paired to its logic board at the factory, making repairs harder.

The Home button has remained mechanical, not a non-moving part like in iPhone 7.

The device uses the same Parade DP655 LCD timing controller like the original iPad Air. iFixit took issue with Apple’s claim that the new tablet has a “brighter” display. 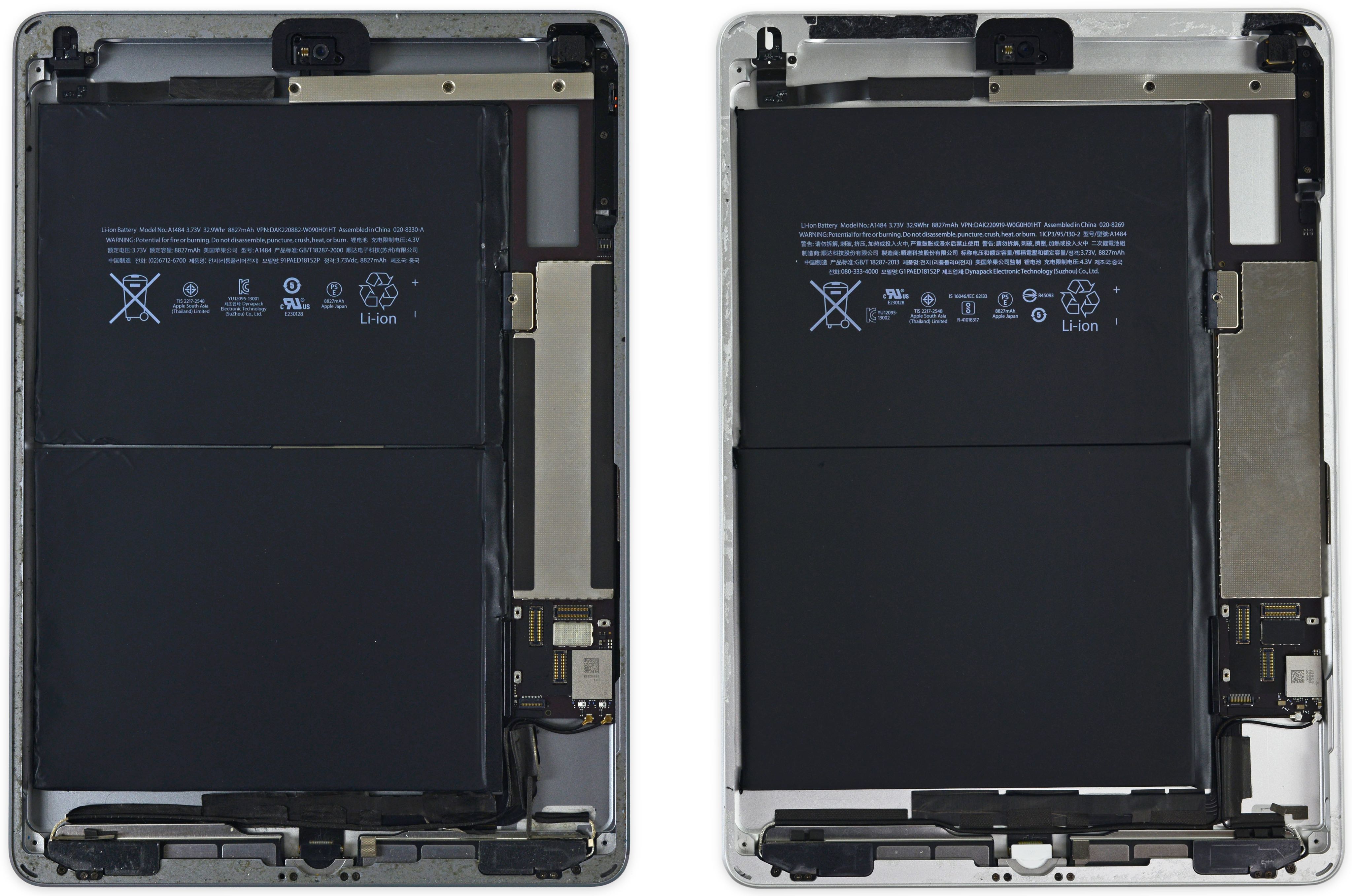 Although the screen is easier to fix, the battery “is still an absolute bear to get out.”

The original iPad Air and its 2017 counterpart pack in the same 32.9 watt-hour battery, beating the 27.6 watt-hour battery in iPad Air 2 and the 27.9 watt-hour reservoir in the 9.7-inch iPad Pro. Although the battery is not soldered to the logic board, “gobs of adhesive” hold everything in place.

Like with the original iPad Air, it’s the most difficult battery to remove in an iPad. 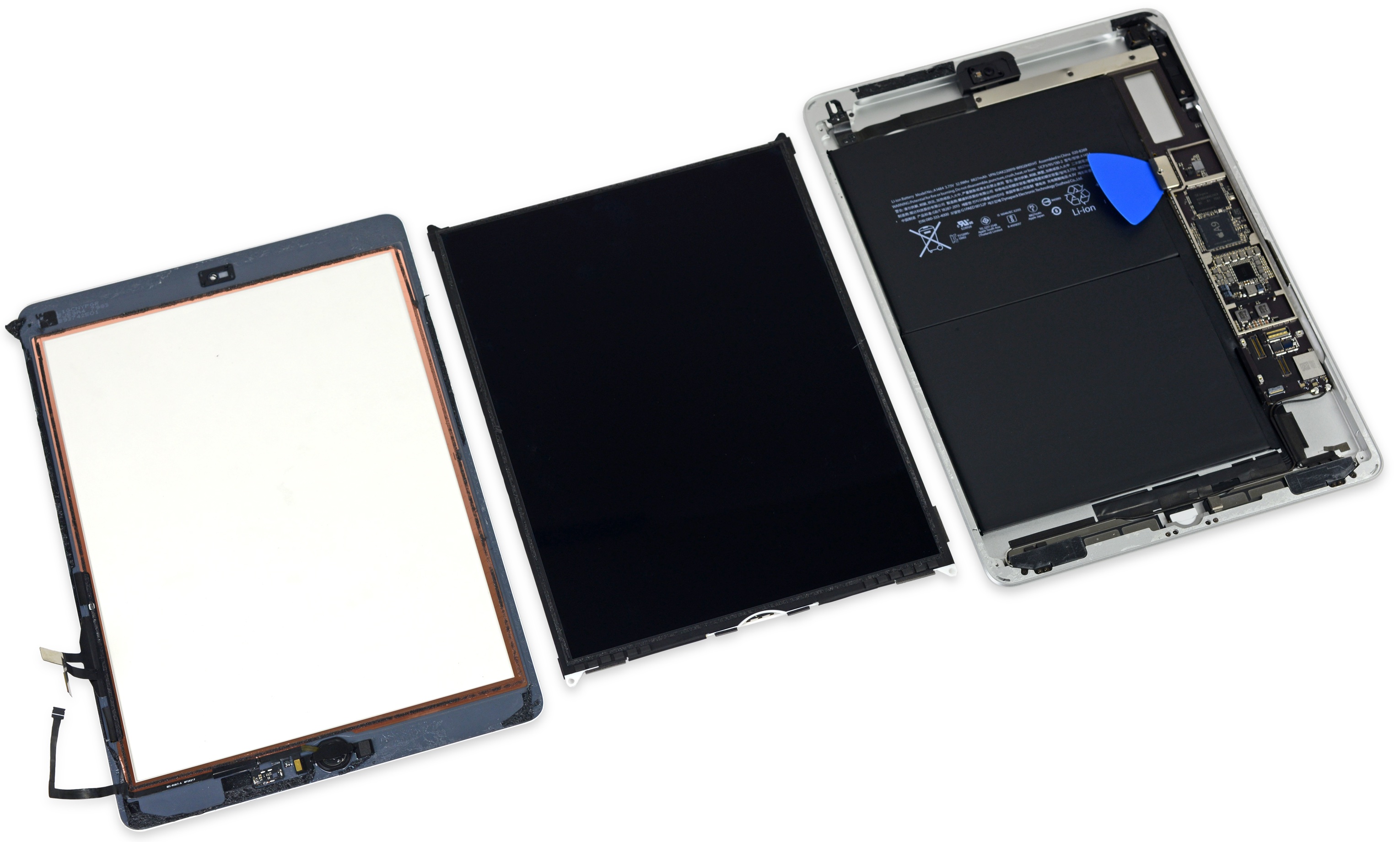 The new iPad, iFixit sums it up nicely, bucks iPad Air 2’s slimming trend and brings back the thicker, more repairable screen of the original iPad Air. “That makes the device cheaper to make (good for Apple) and cheaper to fix (good for consumers),” said iFixit.

They graded the device at a 2/10 on its repairability scale, same as the original iPad Air and the 9.7-inch iPad Pro model.