Anyone with a 3D Touch-enabled device is likely familiar with the bevy of menu options that can be revealed by imposing a simple 3D Touch gesture on apps from the Home screen.

Whenever one of these 3D Touch menus is revealed, iOS blurs the background to draw your focus to the menu, but a new free jailbreak tweak called BlurTouchClean by CydiaGeek can remove the blur effect so you can continue to see everything residing behind the menu.

The tweak doesn’t really provide any functional benefits for your device per se, as it’s essentially intended for the sake of aesthetics. That said, the desire to remove these blur effects comes down to your personal opinion and whether or not you like to see them.

Because BlurTouchClean leaves the actual menu alone and only modifies the appearance of the background, it doesn’t mess with the legibility of the text in the menu itself, which is an important detail for those who might be worried about how a tweak like this might impact your ability to use your 3D touch menus.

Another thing worth mentioning is that some of Apple’s older devices aren’t as snappy with the blur effects as the newer devices are, and this is because they sport older and slower processors. Depending on what kind of device you’re using, BlurTouchClean may be able to make using your device a little more tolerable. Removing the blur effect can help reduce strain on your device’s GPU, potentially increasing performance on devices with older hardware.

For said older devices, which don’t support 3D Touch out of the box, you would need to use a 3D touch simulator tweak like Peek-a-Boo to invoke the 3D Touch menus.  If you fall under this category, you’ll be happy to know that BlurTouchClean works perfectly on devices where the menus are being simulated as well.

BlurTouchClean doesn’t have any options to configure except for a single kill switch in the Settings app. This lets you toggle the tweak on or off on demand: 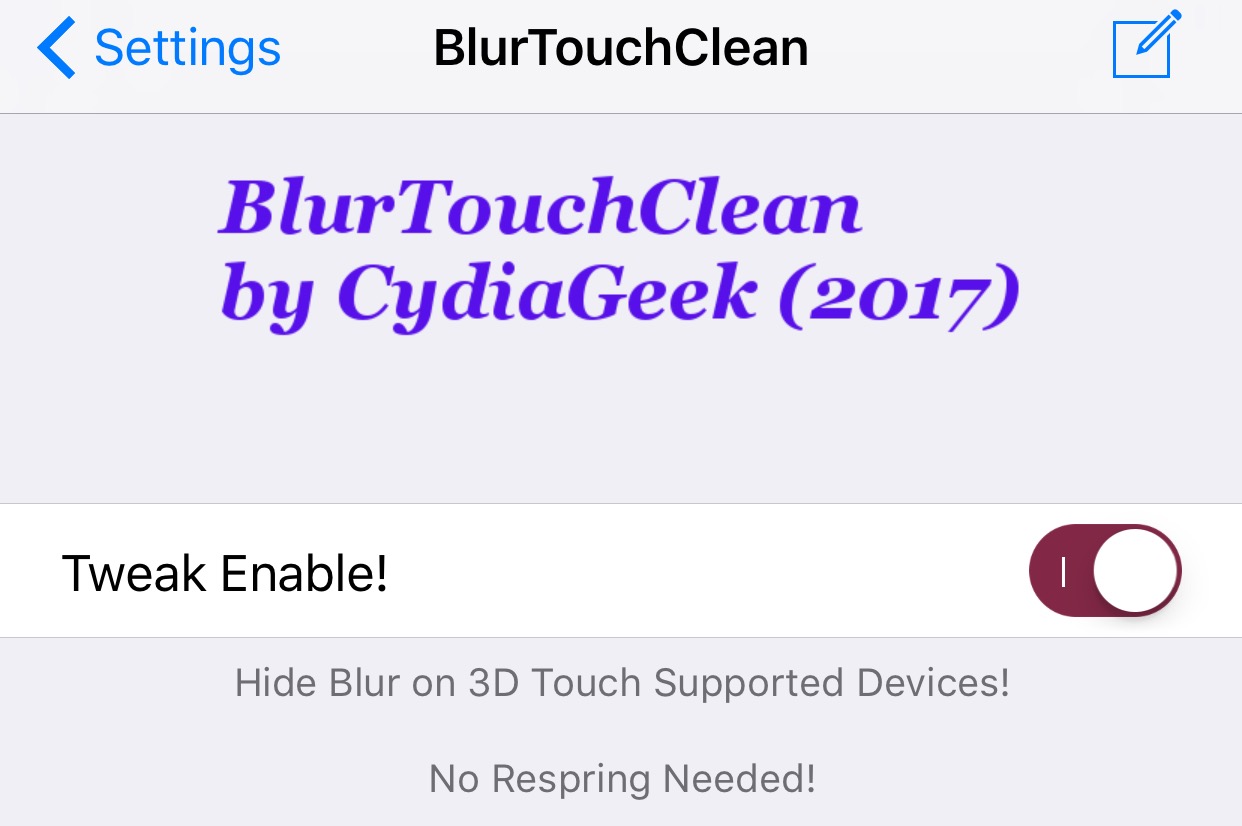 You don’t have to respring your device after you change this setting; it will take effect immediately.

If you’re interested in trying BlurTouchClean, you can grab the tweak for free from Cydia’s BigBoss repository. Keep in mind that it’s intended for jailbroken iOS 10 devices and some kind of 3D Touch capability (simulated or not) is required to make the most of it.

Do you prefer the look of your 3D Touch menus with or without the stock blur effect? Share in the comments below!