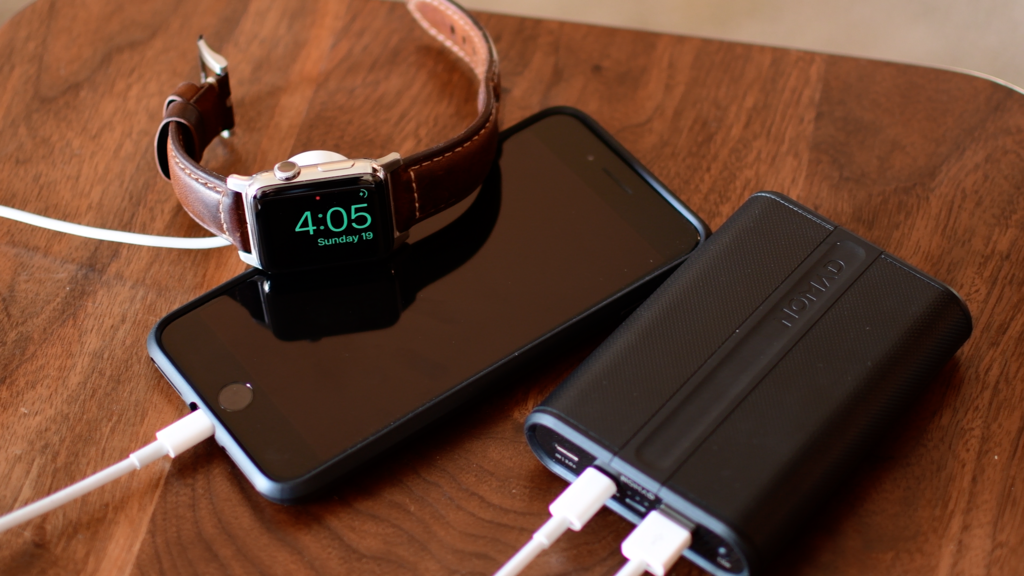 Battery packs are a hot commodity these days because it seems like our mobile devices never want to last as long as we’d like them to. They bring us out of the dark ages, where we used to have to sit by a power outlet and wait for our handsets to charge, and are advantageous because they allow you to charge on the go, no matter how far away from civilization you might be.

On the other hand, people who are always on the go have a tendency of misplacing things, and sometimes that means losing their battery packs. That’s why Nomad came up with the PowerPack, a trackable battery pack you can keep tabs on with your mobile device, even when you’ve forgotten it somewhere or misplaced it.

The tracking is powered by Tile, a popular Bluetooth-based service that uses Bluetooth to locate Tile-enabled devices. Even when they’re not in range, Tile’s Community Find feature allows other Tile users who might be walking past your lost device to anonymously report your PowerPack’s location to you, so you’ll get a notification and that person won’t even know they’re helping you find your device. As the Tile community continues to grow, your chances of finding your lost items are always increasing. 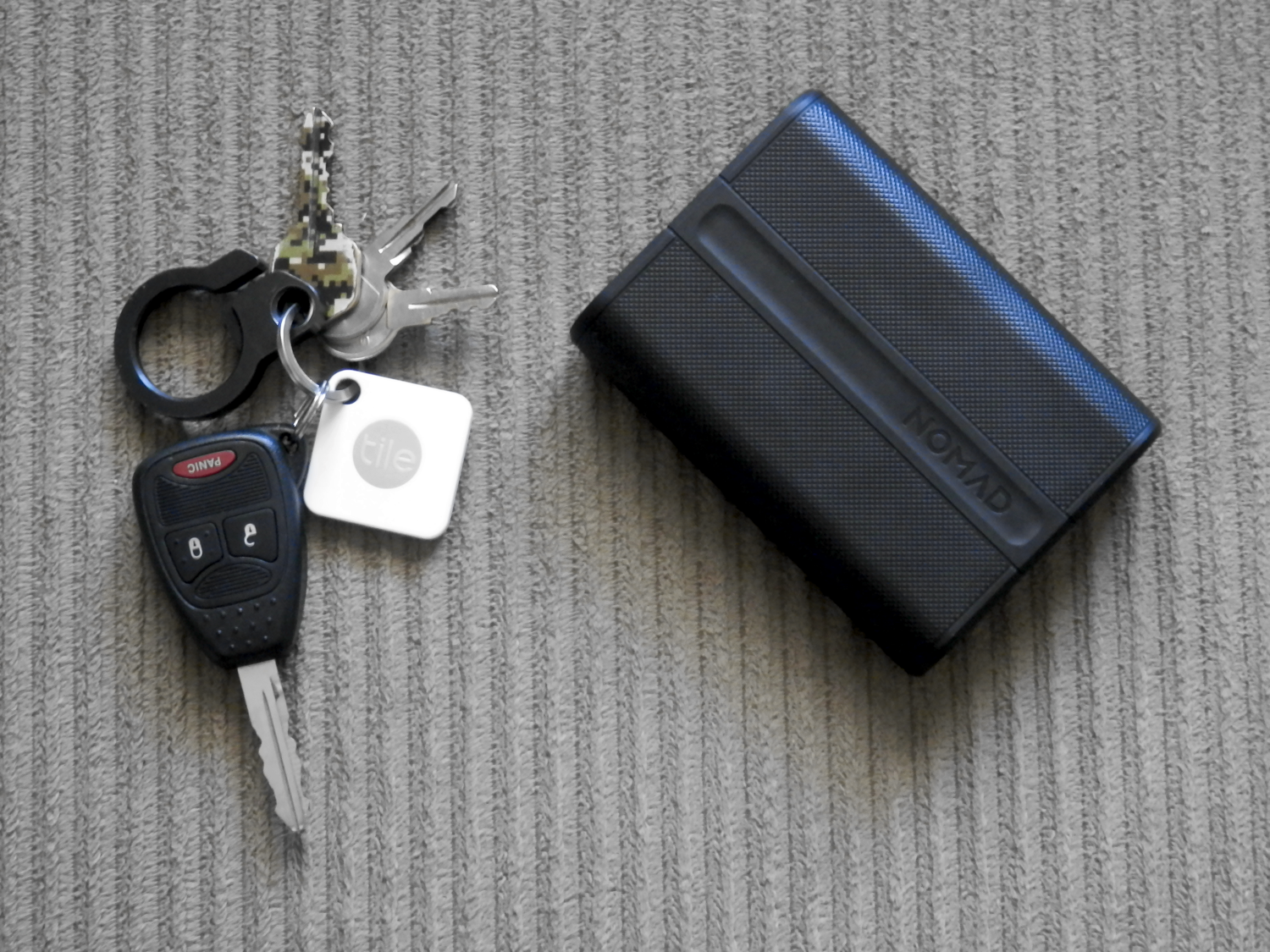 PowerPack is no slouch of a battery pack in terms of performance either. With 9,000 mAh of power served by long-lasting Panasonic batteries, iPhone 7 users can get 3.5 full charges from it before it needs to be recharged. More importantly, it offers pass-through charging (hub mode) and fast-charging output capabilities, including 3.0A @ 5V, 2.0A @ 9V, and 2.0A @12V.

PowerPack also supports both USB-A and USB-C devices and charges over USB-C. These latest I/O ports paired with the Tile tracking capabilities mean PowerPack is pioneering the modern era of battery packs.

A closer look at PowerPack

The Nomad PowerPack battery is designed with a rugged military-grade TPU rubber external shell that can withstand moderate drops. The casing is nice and grippy, so it won’t feel like you’re going to drop it every time you pick it up. 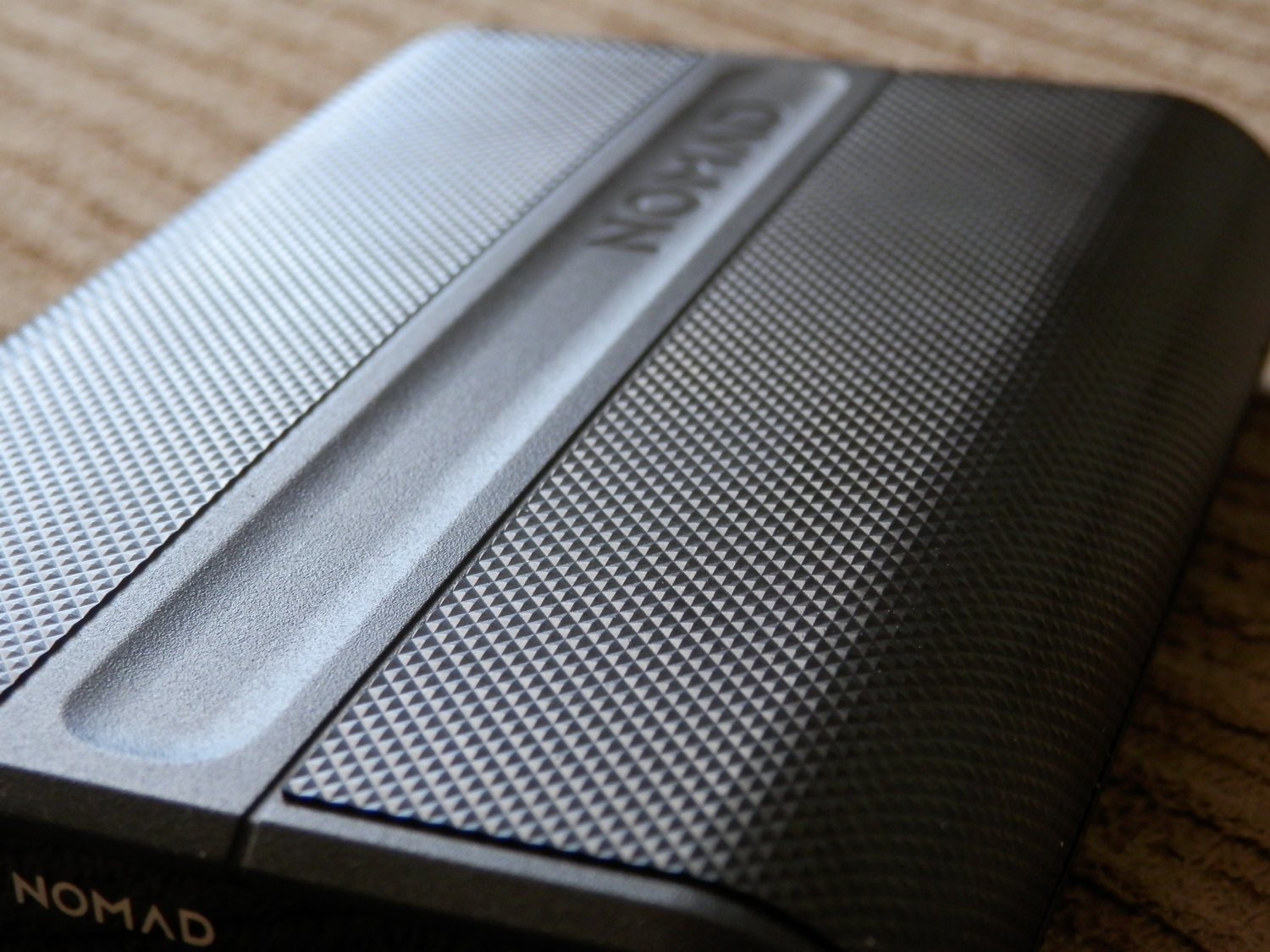 The shell does make the battery quite thick. It just barely stays under the thickness of Aukey’s 30,000 mAh battery pack. On the other hand, it’s shorter and lighter, so it’s easier to pocket or carry around in a bag than the latter.

There are two 3.0A USB-C ports, one for input and one for output, and there’s also a standard 2.4A USB-A port for output, so this would work with all of your USB-based devices, so long as you have the cables to use with it. 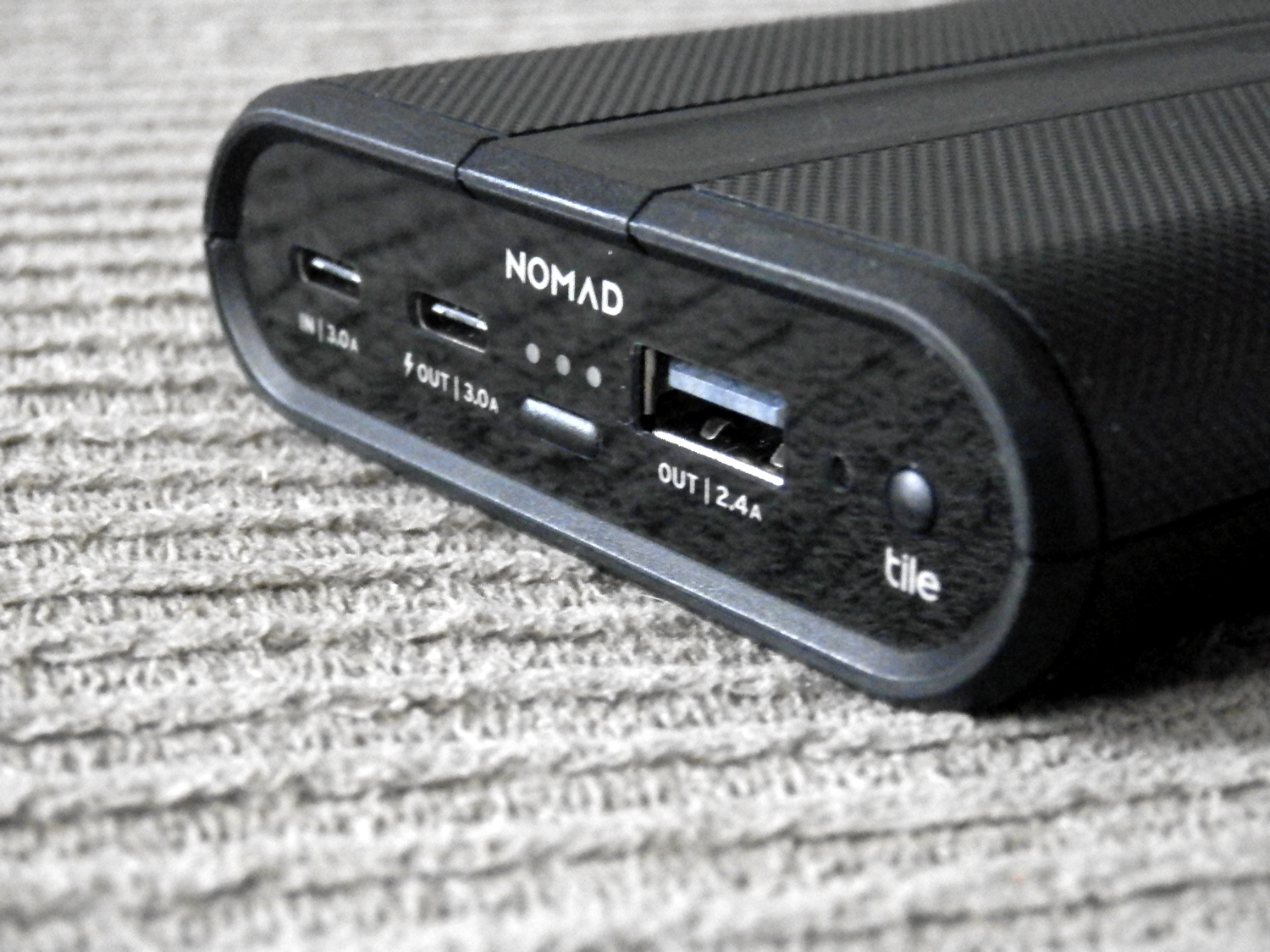 In the middle of all the ports is the power indicator, which consists of three LED dots. Pressing the button illuminates the dots to show how much battery life remains. Those dots equate to the following scales: 1 dot = 1-33%; 2 dots = 34-66%; three dots = 67-100%.

At the far side of the battery is a button labeled “Tile.” This is used for setting up your device with the free Tile app from the App Store.

Just beside the Tile button is a little hole. It turns out this is an ambient light sensor that can detect the light around PowerPack. This allows the battery indicator to change its brightness level depending on the lighting conditions around it. In other words, for those of you who charge your stuff at night while you’re trying to sleep, say goodbye to bright lights keeping you awake!

Like all Nomad products that I’ve tried in the past, the quality of PowerPack is top-notch and it feels great in the hand, but the battery itself is only half of the cool factor. 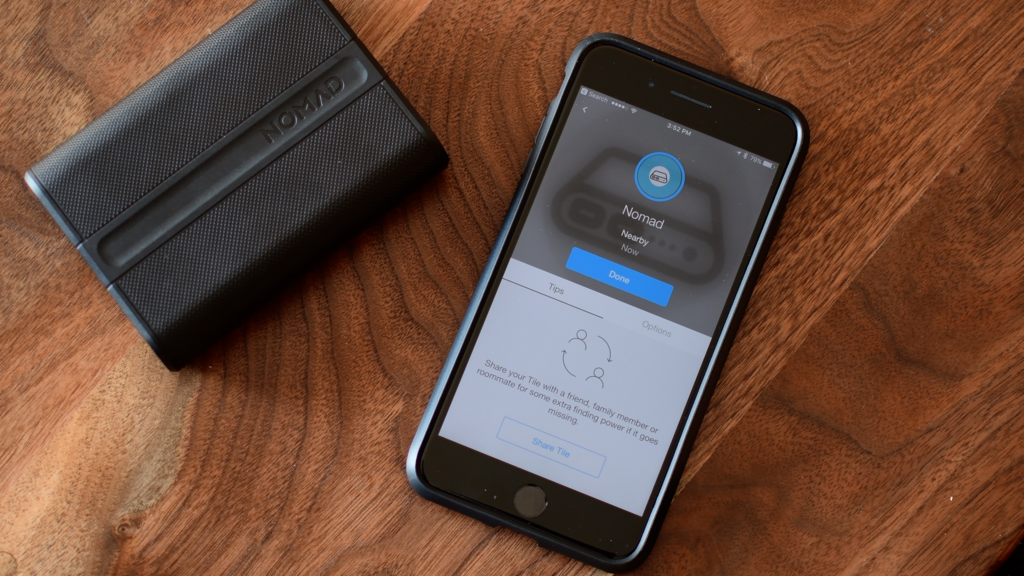 One of the major things that sets PowerPack apart from the competition the integrated Bluetooth-based Tile tracking. This works just like any of your other Tile devices you might have, such as the Tile Mate ($25 – Amazon) for your key ring or the Tile Slim ($30 – Amazon) for your wallet. 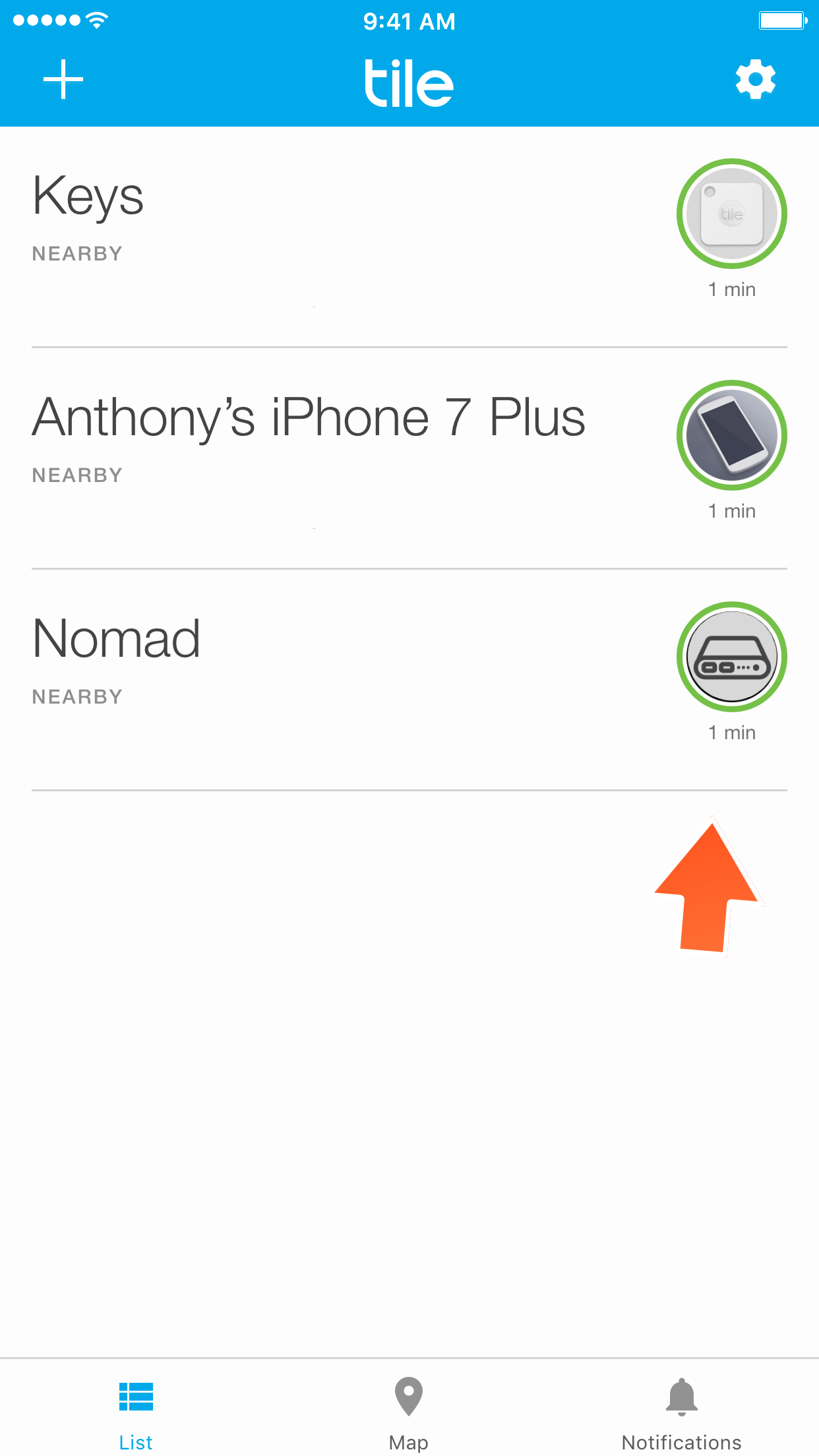 By launching the Tile app on your iPhone or iPad, you’ll see a list of your Tile-enabled devices, including your Nomad PowerPack. You can tap on one for more information about its whereabouts, and you can even play a tone if you’re in range, which can be helpful in finding lost keys or PowerPack when they fall into the cracks of your sofa or car seat. 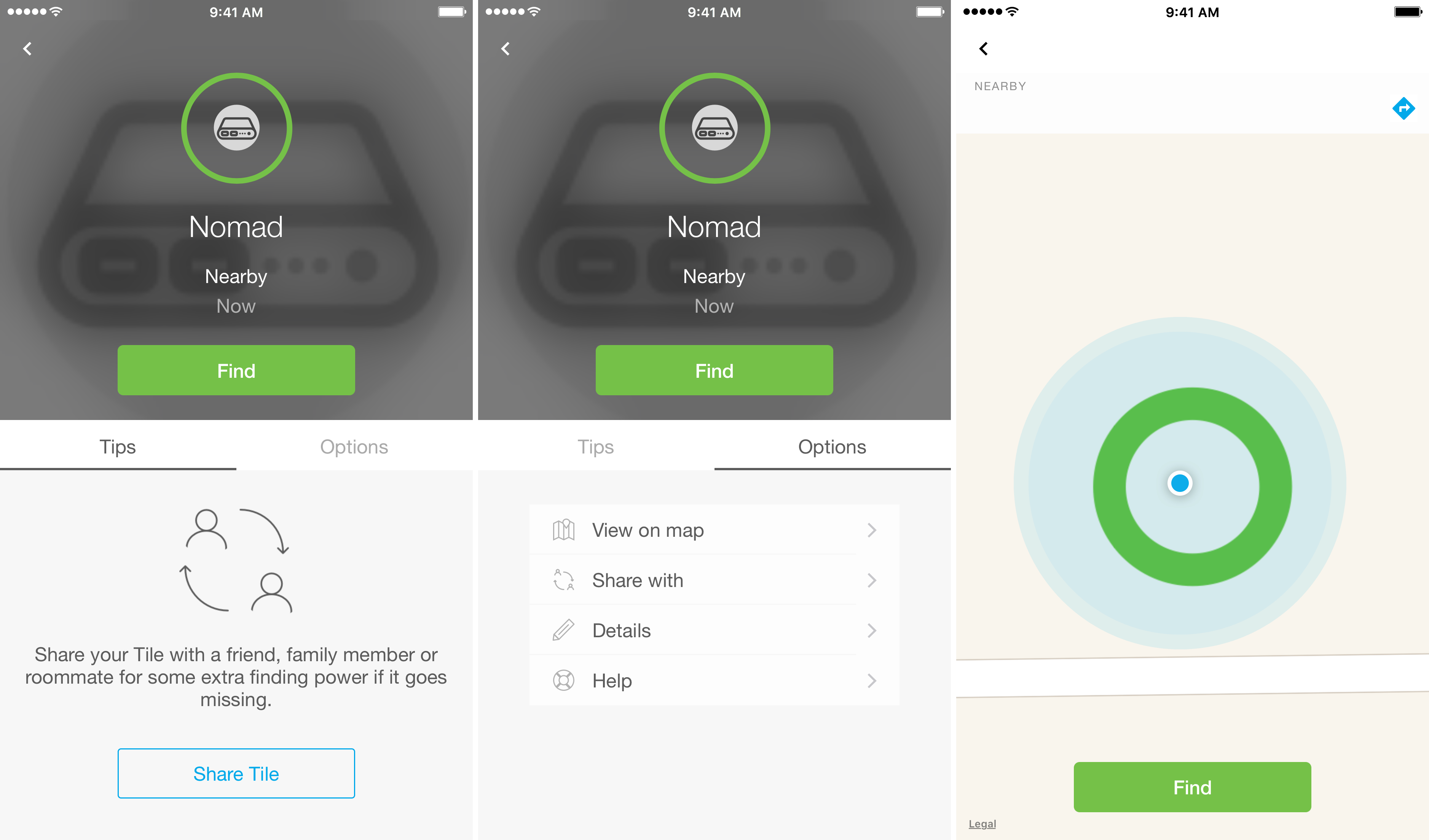 For Tile-enabled items that aren’t in range, you can ask to be notified when it’s found. When the device is in this mode, whenever another Tile app user walks past your PowerPack, you will get a notification from the Tile app, no matter where you are, telling you where your PowerPack was last spotted. 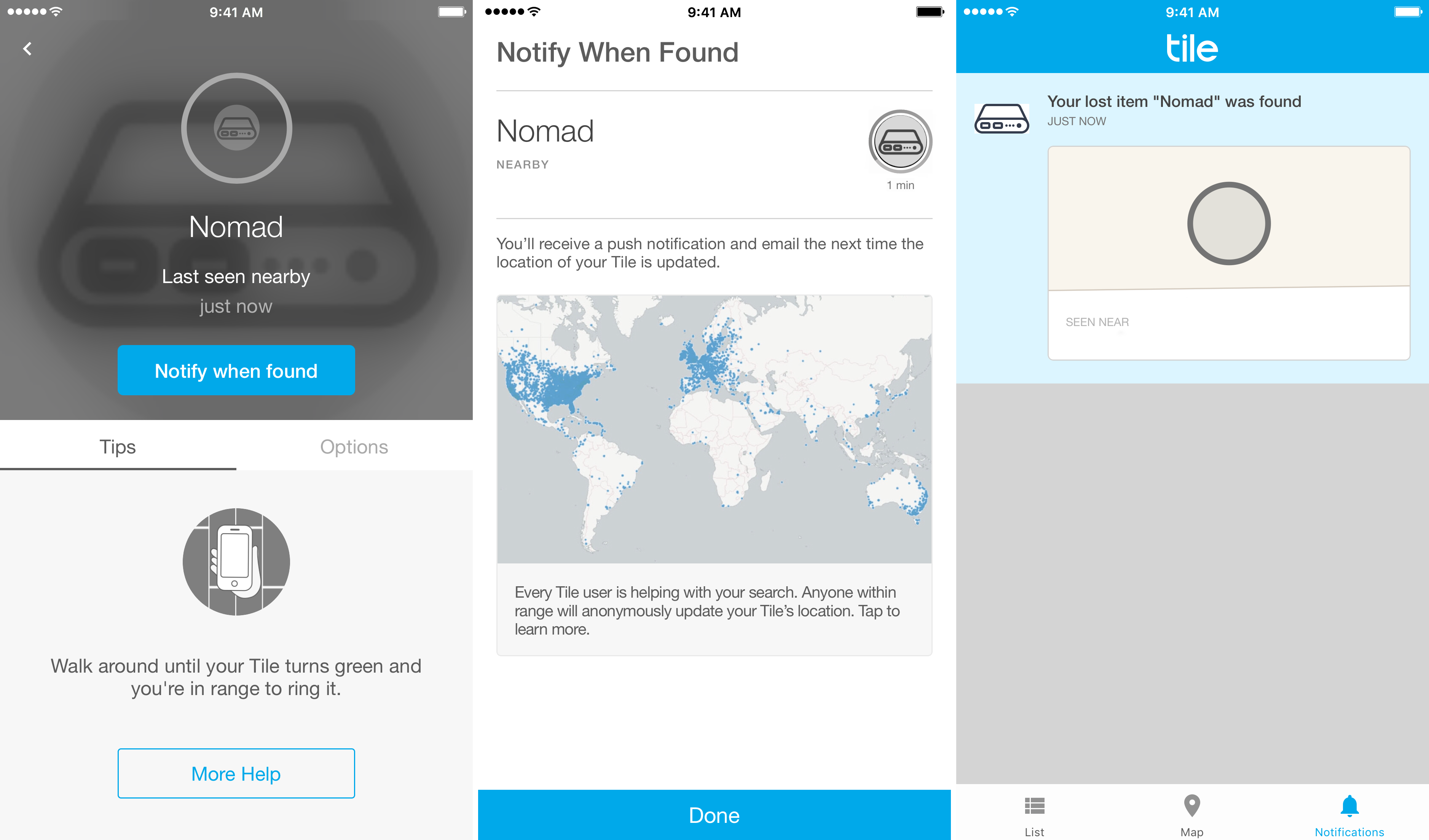 Best of all, the person who walked past your PowerPack won’t even know that their app found your device, so there’s little chance that another Tile user is going to steal your lost battery pack on you. If they did, you’d be tracking their whereabouts thanks to their own app.

Tile is already very popular for many other uses, such as keys and wallets as explained earlier, but being built into PowerPack means you never have to worry about losing your mobile power source either, and that’s a great feeling.

The good and the bad

Overall, Nomad’s PowerPack really does impress. It might be a bit too bulky for some people’s tight pants pockets, but once you feel the build quality in your hand, you’ll probably have no problem holding PowerPack in your hand anyways.

One thing I will point out is because I don’t have any USB-C devices, it feels just as redundant for PowerPack to charge with USB-C as it would to charge with Micro-USB. Personally, I think I would prefer if it charged over Lightning like Aukey’s battery pack does, but to each their own on that, as everyone’s using different kinds of devices that they will need PowerPack for.

Available for $100 on Nomad’s website, the PowerPack is a bit pricey for the battery capacity you’re getting, but what you’re really paying for is the Nomad branding and the Tile integration, which are both two high-quality product names fused into one to create a product worth owning.

Here’s a short list of pros and cons for the Nomad PowerPack:

Overall, PowerPack is one of the top contenders in terms which battery pack I would call my favorite. I have no doubt that its durability will hold up to my everyday life, and the fact that I can easily find it when I leave it somewhere is just an added bonus that makes me trust the product even more.

Do you think integrating Tile integration into a battery pack like the PowerPack is a good idea? Share in your thoughts in the comments below.