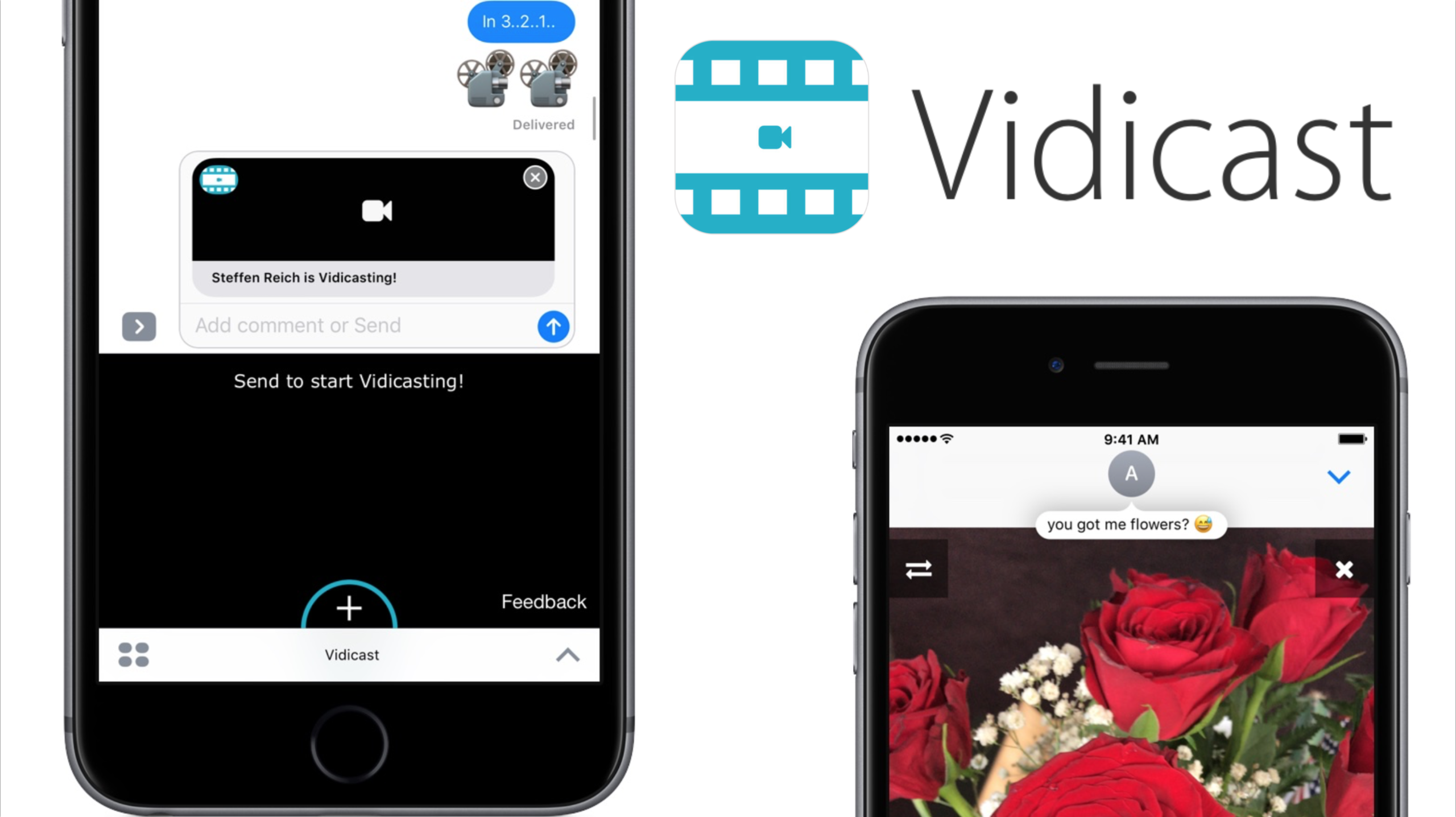 Sometimes you cannot help but feel the iMessage App Store still owes us a couple of unique entrants to wholly justify its establishment last year. Games and stickers aside, the depth and breadth of the store leaves a lot to be desired and must-have iMessage extensions are few and far between. With that, it is always refreshing to welcome a new aspirant to the ranks that sets out to shake things up a little by bringing genuinely new functionalities to your keyboard. Vidicast, a video broadcasting app operating autonomously inside iMessage, does just that.

The iMessage application is best synthesised as a cross of any video broadcasting feature on the most popular social networks today (Instagram, Facebook, etc) and FaceTime. When hooked up, it provides the recipient of the iMessage invitation with a one-way live video stream, which then can be responded to in real time. The ambition of Vidicast is bold, bold enough in fact that one should be willing to give it some rope in regard to early days hiccups. Before you whizz to your iMessage App Store, here’s what you need to know about Vidicast’s attempt to break the mould of iMessage app extensions.

Like any other app on iMessage, Vidicast is beholden to the framework of Apple’s messenger, which is to say that all participants need to have downloaded the application first and invitations to enable the broadcast can be sent out subsequently. The stream is initiated quickly by means of your keyboard extension and once up and running, includes everything necessary for a successful video session including the ability to flip your camera and the iMessage keyboard to reciprocate in written form (if you prefer mute broadcasting). 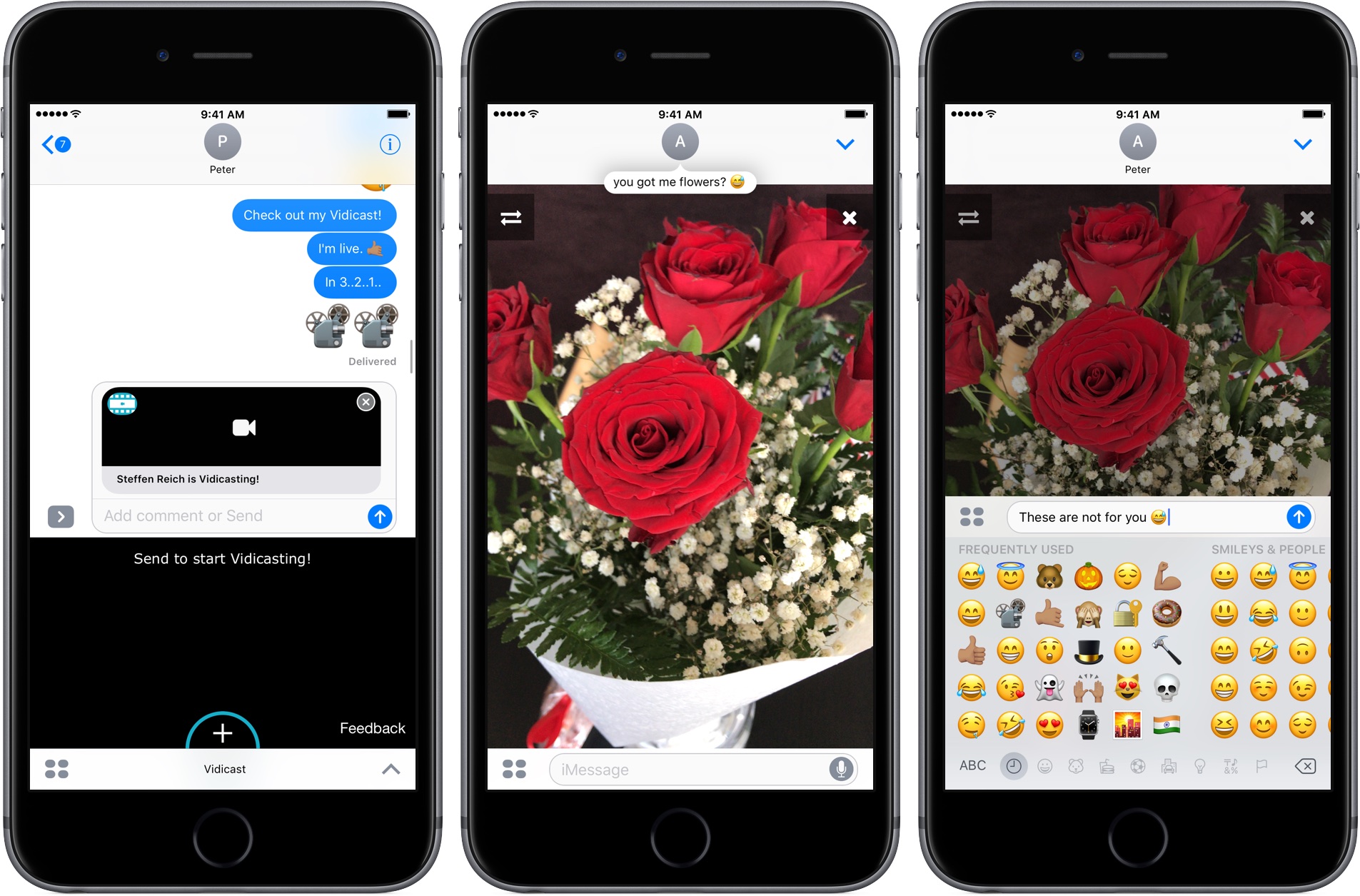 If you catch yourself thinking This sounds an awful lot like ‘Facebook Live’ or Why wouldn’t I just use FaceTime? you’re definitely onto something, but for a certain group of iMessage aficionados there is a strong use case for Vidicast all the same. To start with a definite edge over FaceTime, Vidicast lets you stream your video to multiple devices simultaneously when the invitation is extended inside a group chat. The upsides of such a feature are self-explanatory and as long as FaceTime remains behind-the-curve in the multi-chat realm, this is a practicable way to share your impressions with multiple people by way of iMessage. As far as live streaming video on social media goes, these channels might be more polished and interactive, but at the same time, as the name implies, also more social and public.

Such being the case, if you like the idea of letting somebody close to you sneak a peek into your world but don’t want to bare all on social media, Vidicast could be worth a shot. What’s more is that the app offers a Play From Beginning button, effectively making Vidicast a tenable solution for both live streaming but also regular video transmission. In other words, if you’re quick enough to launch the Vidicast invitation shortly after extended to you well done, however missing the broadcast isn’t the end of the world either as the recorded video is going to stand by in the chat for your (belated) viewing pleasure. 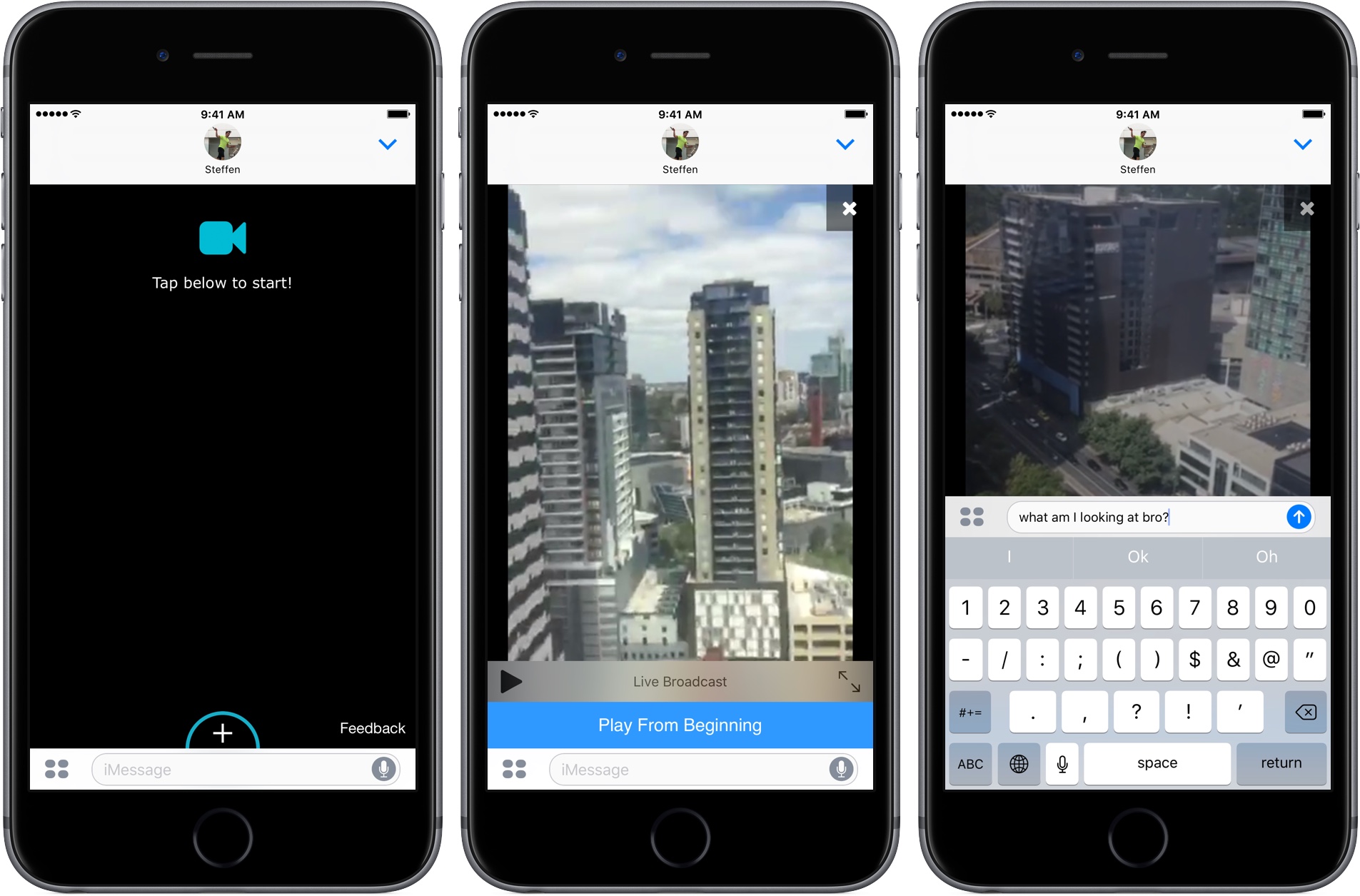 If all this sounds almost to good to be true, that’s likely because so far we have not illuminated the flip side of Vidicast.

There’s admittedly not that much wrong with the app (hence the feature) but if one thing had to be singled out it would be occasional drops in performance and a notable delay in the video transmission overall. I’ve had a crack at it both on Wi-Fi and cellular and could not shake the feeling that these live broadcasts were a little behind what the likes of Facebook and others are capable of facilitating in terms of minimizing time lag. This may vary from case to case but can definitely tarnish the live experience you’re trying to have with your peers, and if that sounds like nitpicking to you, it’s probably because it is. On balance, for an app in its infancy mind you, Vidicast does remarkably well.

So there you have it, if you appreciate FaceTime for its deep integration into iMessage but at the same time wish for a one-way broadcasting option to multiple contacts, Vidicast could be the answer for you.

Vidicast requires iOS 10.0 or later and is compatible with iPhone, iPad and iPod touch. Find it for free in the App Store.