Apple’s boss Tim Cook said on a recent earnings call with investors and analysts that his company on average acquired between fifteen to twenty smaller companies per year for the last four years, noting that Apple looks for startups of all sizes. “There’s not a size that we wouldn’t do based on just the size of it, it’s more about the strategic value of it,” he said.

A new report Wednesday from Bloomberg alleges that Apple’s reluctance to cooperate with third-party advisers like investment banks, risk aversion and internal acquisition strategy are standing in the way of large takeovers.

Apple is said to be inexperienced in closing and integrating large takeovers. Its lack of a successful track record integrating big acquisitions puts off sellers, said sources who have worked on acquisitions with the company.

When AT&T agreed to buy Time Warner for $85 billion in October 2016, for instance, Apple was reportedly unable to pull together a competing proposal quickly enough. Apple’s deals team is apparently composed of about a dozen people under former Goldman Sachs banker Adrian Perica.

Rather than cooperate with investment bankers appointed by the seller, Apple’s acquisition team prefers working directly with company management. They are said to “dictate” terms and tell targets “to take it or leave it.”

“There’s a swagger—you may call it arrogance—about the culture there,” said Eric Risley, managing partner at Architect Partners. “They’re used to being able to muscle their way in and get attractive economics.”

Apple’s largest deal to date is the $3+ billion purchase of Beats.

Some analysts think Apple needs at least one big acquisition in online video to meet the self-imposed goal of growing its annual services revenue to $50 billion by 2021.

Some of the potentially blockbuster acquisition targets for Apple would include Walt Disney and electric carmaker Tesla, analysts opined. “They’re going to have to pursue something bigger than a Beats-like acquisition,” said Erick Maronak, chief investment officer at Victory Capital Management. 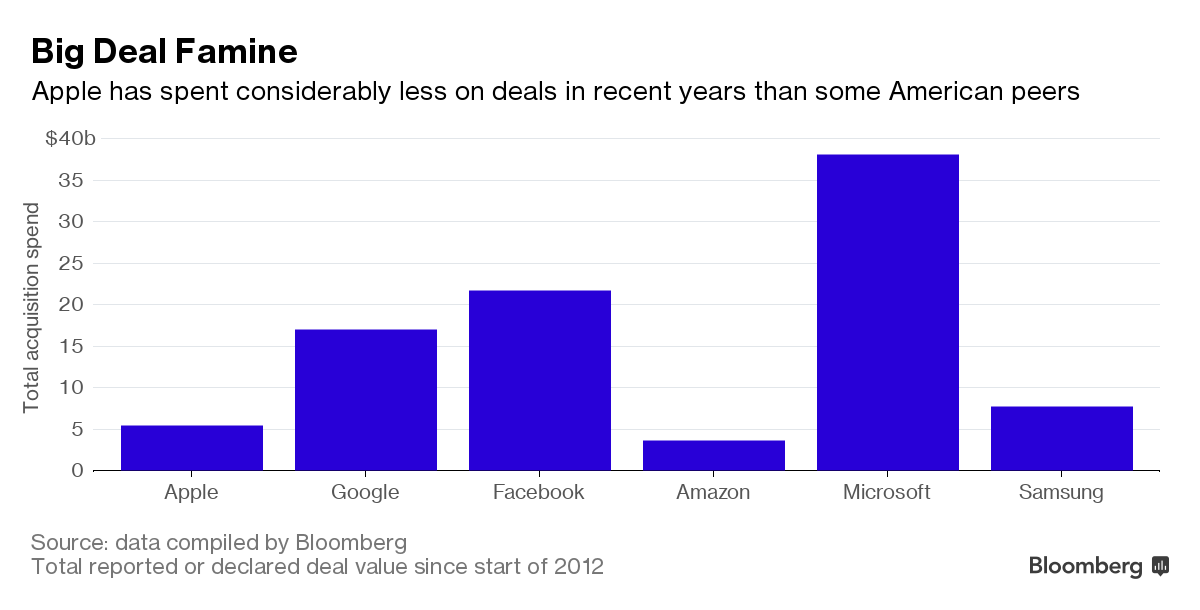 When Morgan Stanley’s Katie Huberty wanted to know if Apple’s leadership was open to larger mergers and acquisitions, Cook responded by saying cryptically, as he always does, that Apple is always looking at acquisitions. Any large takeover would need to come in the form of the Netflix or Time Warner acquisition, presumably.

Apple has $246 billion in cash holdings so clearly they have the financial clout to snap up pretty much any corporation out there. The question is, should it? While there may be clear benefits to buying, say, Netflix or Time Warner, what might happen after any such deal in terms of potential corporate culture clash is an entirely different matter.

While we know from Cook’s remarks that Apple continues to acquire smaller companies at a clip of 15-20 startups every year, I’m more interested in learning about other acquisitions they potentially made but didn’t disclose.

As you know, the Cupertino company has a penchant for confirming acquisitions with its usual boilerplate statement, but only after the media discover such deals.