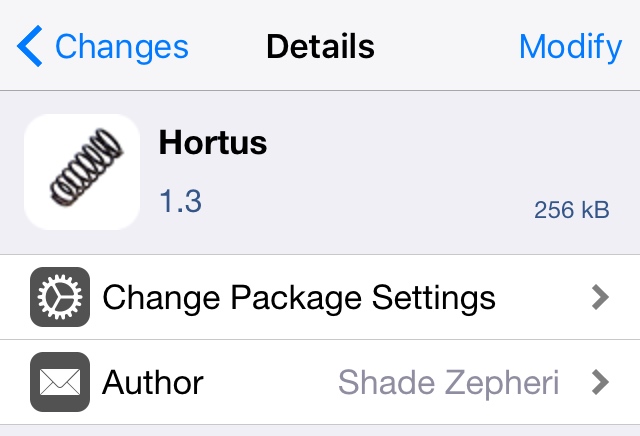 Way back in 2013 when chpwn was still a prominent developer and hacker for the jailbreak community, he released a popular free jailbreak tweak called %hook’s law, which added springy animations to your iPhone.

Now a new jailbreak tweak called Hortus is porting these fun and quirky animations over to iOS 9 so you can enjoy them on your modern day jailbroken device(s).

Because everyone’s not a physics major, you may or may not know anything about Hooke’s Law, so to keep things simple for everybody, we’ll just show you how this tweak animates your device differently.

Its springy and fun animations are seen throughout iOS, whether you’re launching or closing apps, or simply navigating through panes of an app you have open.

Here’s an example of an app launch & close animation from the Home screen with the tweak installed:

Also for your viewing pleasure, here’s how it affects panes inside of apps, such as the Settings app:

You can adjust the animation’s intensity by going to Settings → Hortus and experimenting with sliders and toggle switches:

Here, you have options for toggling the tweak on or off entirely, as well as adjusting the stiffness, damping, mass, velocity, and speed. Another section lets you limit the animations to the Home screen only, and exclude certain applications from exhibiting the animation to quell graphical issues with incompatible third-party apps.

Overall, I’ve always sort of liked the original %hook’s law jailbreak tweak, but since chpwn doesn’t appear to be an active part of the jailbreak community anymore, the original tweak hasn’t been updated for modern versions of iOS. Now, Hortus is your chance to have this quirky animation once again, even on iOS 9.3.3.

If you want to give it a try, you can download it for free from Cydia’s BigBoss repository today.

Do you like the springy animations from Hortus? Let us know what you think in the comments section below.