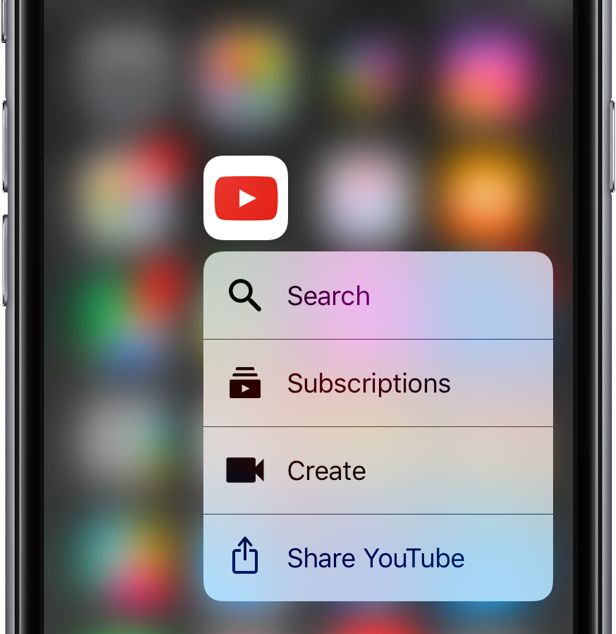 To say that YouTube, one of my favorite mobile apps from Google, has poor 3D touch support would be an understatement: it’s been now a full year since the iPhone 6s introduced the world to 3D Touch and yet support for the technology is literally non-existent in YouTube for iOS.

Conveniently ahead of the iPhone 7’s arrival, Google yesterday moved to assuage some of the concerns of users who have been craving for 3D Touch in the app, releasing a small update which enables some interesting shortcuts on the Home screen.

Assuming you’re logged in, pressing YouTube’s icon with 3D Touch will produce a shortcuts menu with the following options: Search, Subscriptions and Create.

As you may have guessed, selection Search launches the app right into the search feature, with the keyboard already up so you can instantly start trying.

If you want to go to the Subscriptions tab to quickly see the new videos from channels you follow, select Subscriptions on the Home screen. And lastly, the Create option launches the app in camera mode so you can immediately start shooting your next big hit on YouTube.

This is all pretty basic as YouTube does not make any use of Peek and Pop within the app, but it’s a start I guess.  As a bonus, iOS 10 users will also see a fourth option to share the app with friends and family (yes, iOS 10 puts that option in the shortcuts menu for each and every app on your device).

You need YouTube 11.35 for iOS to use these 3D Touch shortcuts, available at no charge in the App Store.