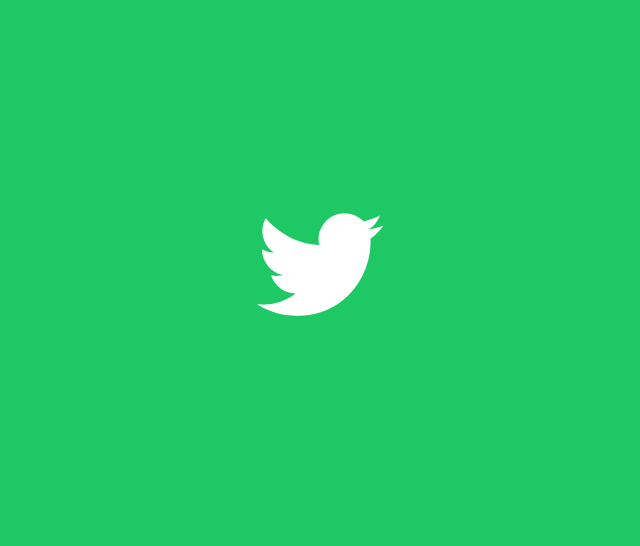 Are you a Twitter user and rocking a jailbroken iOS device? If so, then check out a new free jailbreak tweak from Cydia called TwitterUICustomzer to see how you can get the most out of your app’s UI.

With this tweak, you can add a splash of any color you want to your stock Twitter app in iOS.

The tweak is designed to apply the color you choose to all kinds of various elements in the app. Among some of the things that are affected by the color change are:

Some examples of how the color affects the look at the interface are shown in the screenshots below: 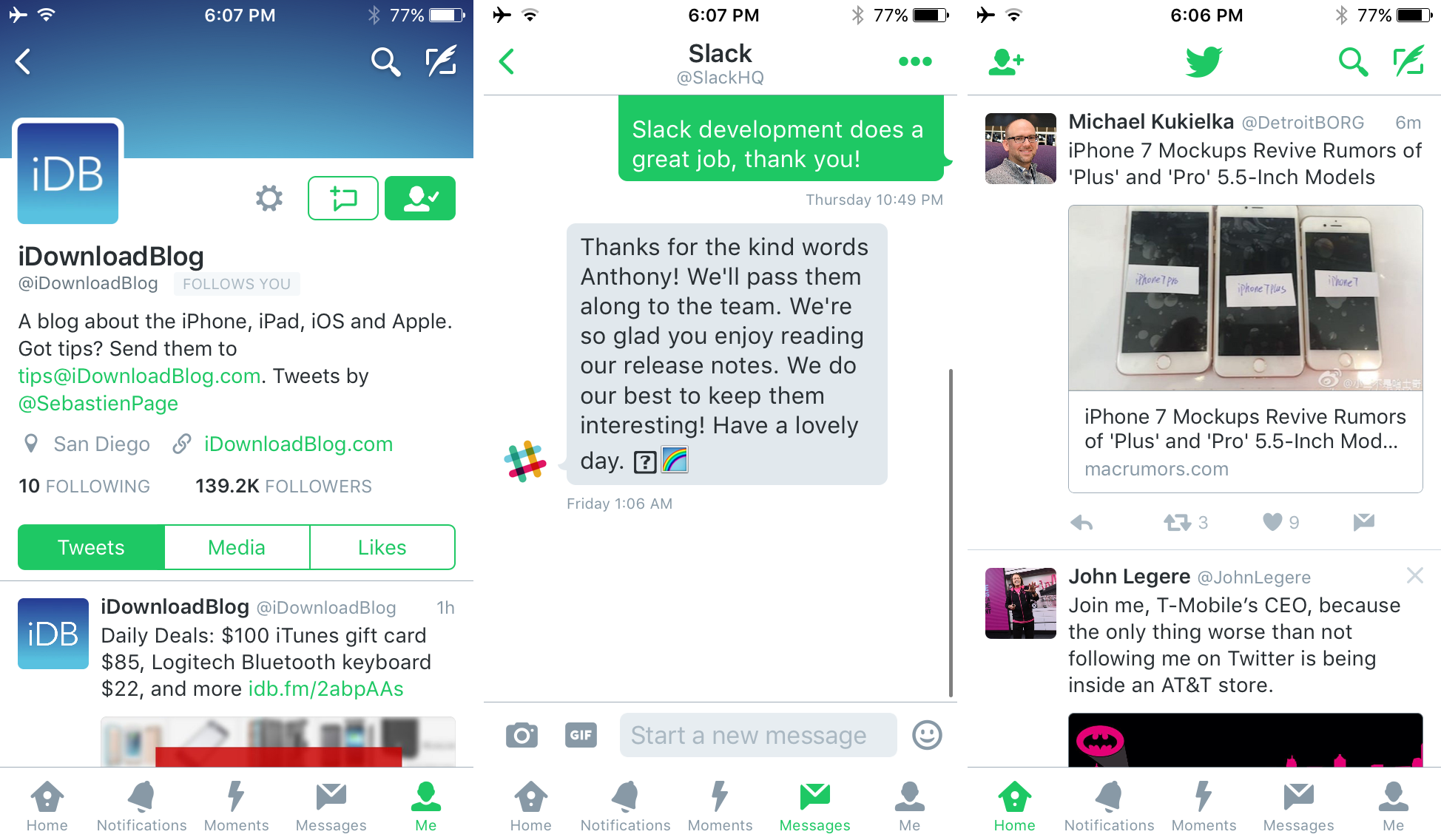 Although you’re probably used to the baby blue look by now with Twitter’s default color scheme, you can use TwitterUICustomizer to set up any custom color you want, and this gives you a much more personalized experience within the app.

TwitterUICustomizer adds a preferences pane to the Settings app where you can choose the color you feel like using throughout the Twitter app. Ours is set to green, as you can see, but the color picker has a lot more colors to pick from. 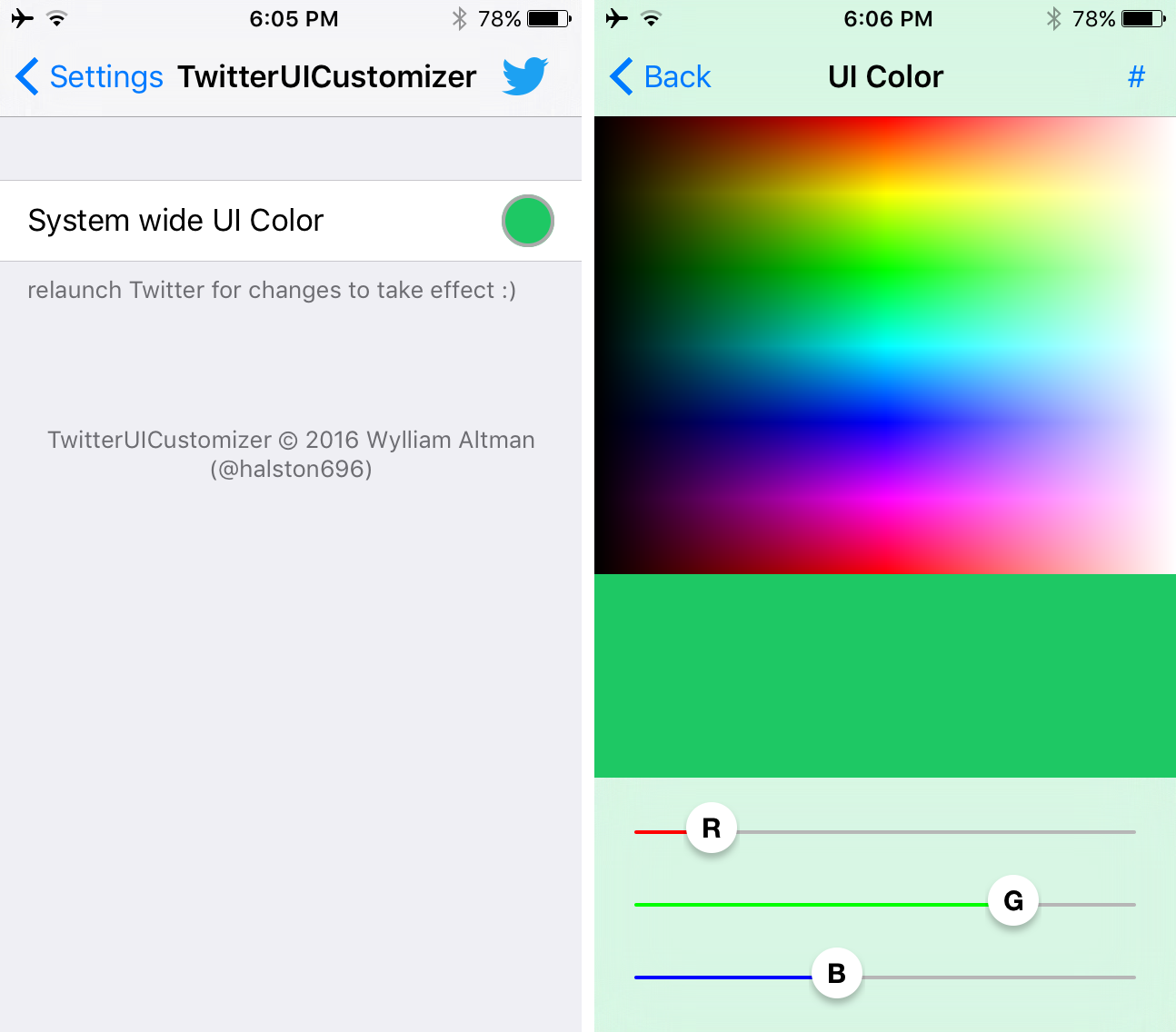 Because the app uses a color picker, rather than a list of preset colors, you actually don’t have any color limitations. Every color on the rainbow, and everywhere in between, is included and you just have to tap and drag to get to it.

After you’ve selected the color you want, all you have to do is open the App Switcher, kill the Twitter app, and restart the Twitter app for your changes to take effect.

I particularly like the way the tweak styles more than just the simple things in the app. With a custom color selected, a wide variety of elements in the app are changed to give you a fuller color-change experience, which to me makes this tweak feel well-made.

Depending on what your favorite color is, adding your own splash of color to the Twitter app is a nice feature to have for aesthetics, but it’s worth pointing out that there’s no functional benefit to this. It’s just going to let you, and you alone, have a way to express your own personality through your Twitter app. No one else using Twitter is going to see your changes, unless you show them your iPhone’s screen.

Since the tweak is meant for the stock Twitter app, it’s not going to be compatible with third-party apps like Tweetbot, so this is something to keep in mind.

Should you check it out? It’s ultimately going to come down to whether or not you like to customize colors of things or not. I know there are a ton of themers out there that like to have very specific color schemes on their devices, and this just might be one of those tweaks they need to compliment their unique device desires.

TwitterUICustomizer lets you put a different color spin on the stock Twitter app as a whole on any of your jailbroken iOS 9 devices. If you don’t already have the Twitter app installed on your iOS device, it’s a free download from the App Store.