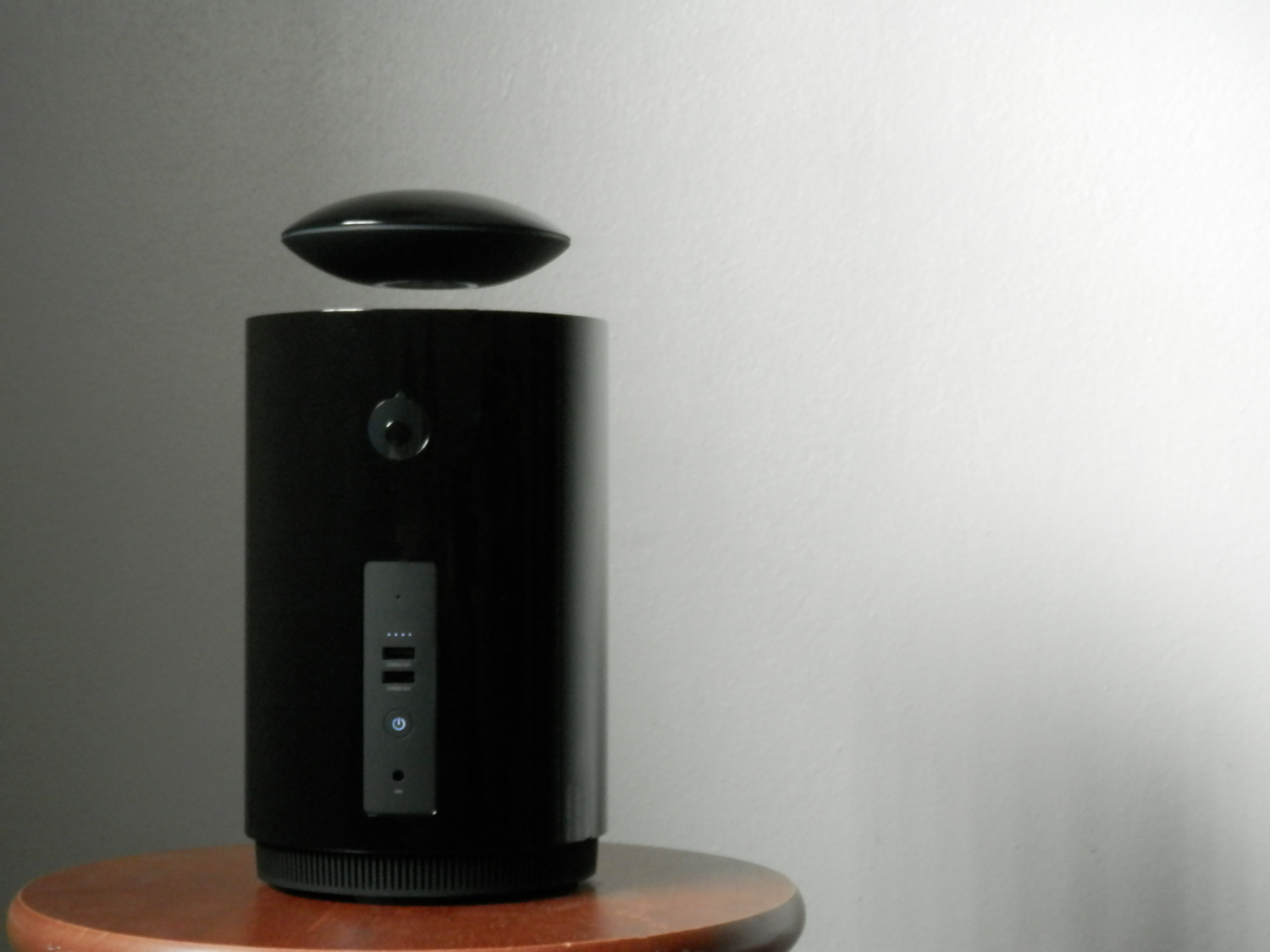 Picking the right Bluetooth speaker for your needs can be hard, especially with all the options out there.

On the more premium shelf of options out there is Mars by Crazybaby, which is a levitating Bluetooth speaker with a long list of features that we think makes it well worth the price.

In this review, we’ll talk about what the Mars is capable of and show off its features.

The Mars by Crazybaby isn’t a cheap Bluetooth speaker like those you can just grab off of Ebay for a few dollars. This is a premium Bluetooth speaker that clearly has Apple devices in mind. In fact, just looking at it, you can sort of see the resemblance to the Mac Pro.

The bottom of the speaker system is basically a subwoofer with a powerful neodymium magnet inside of it that can move up and down very carefully such that the opposing magnets in the levitating tweeter speaker hold it in place in the air. 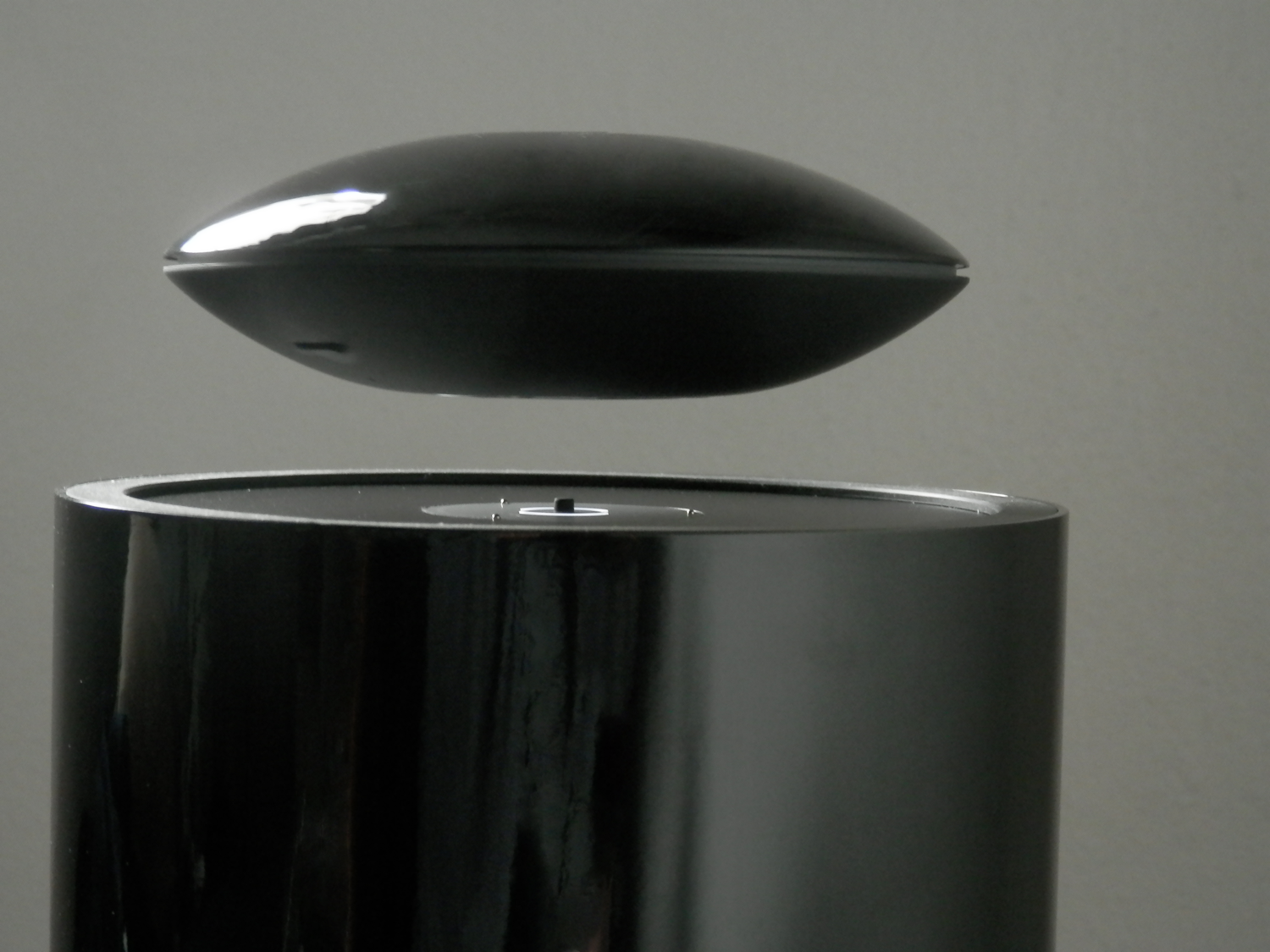 A guide pin, shown in the image above, lets you place the speaker on top of the base, and then the magnet automatically detects the connection to the speaker and starts to push the Mars (the UFO-shaped tweeter speaker) into the air.

Because the tweeter speaker operates on its own battery power, separate from the base, it’ll automatically float back down to make a connection to the base when its battery level gets too low so it can charge. The entire speaker system gets about 8 hours of battery life on a single charge. 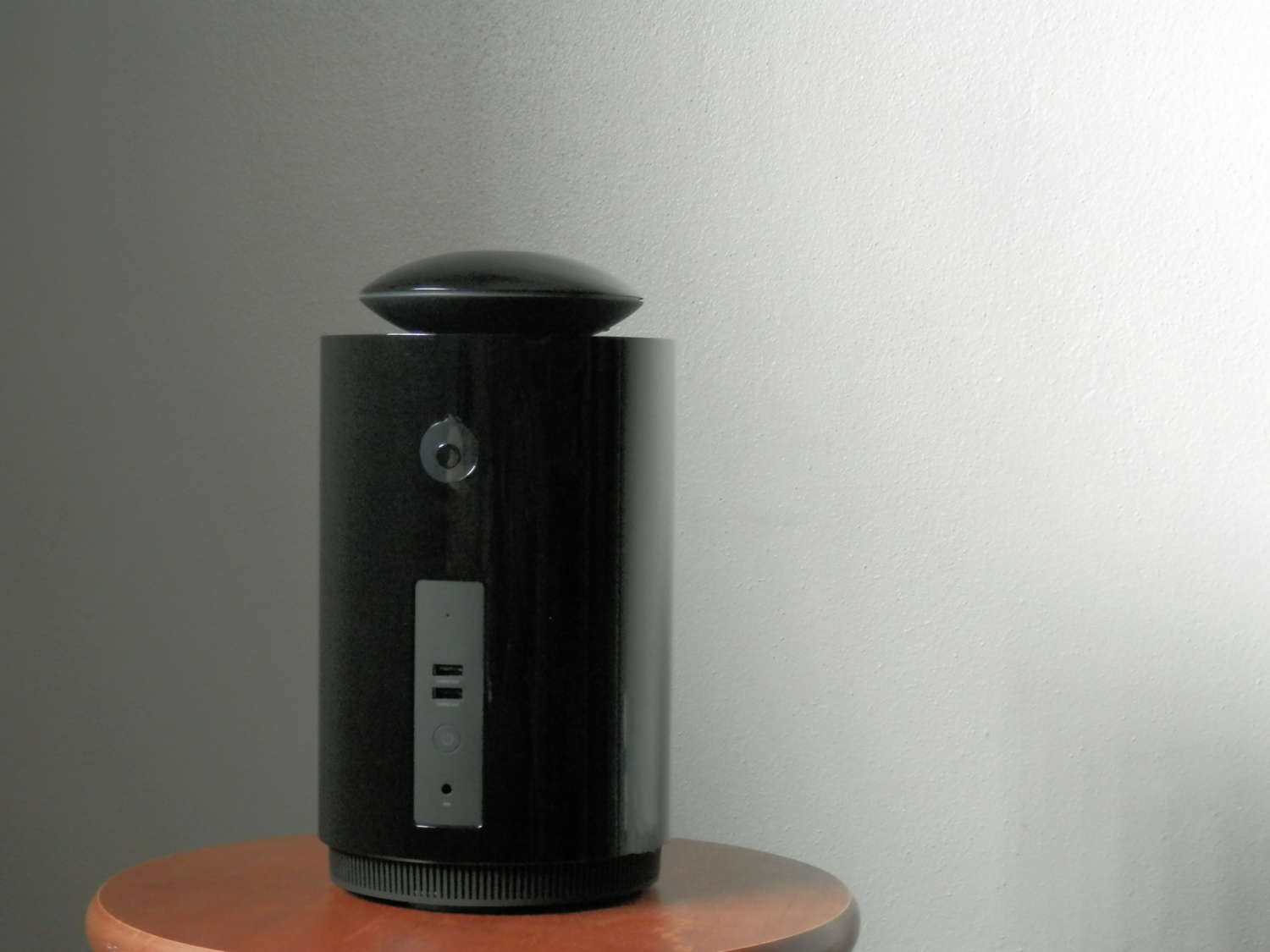 The base is not just a subwoofer and a powerful neodymium magnet system, but it’s also a hub for charging all of your devices. You’ll see two USB ports that are great for keeping your iPhone, iPod touch, iPad, or even your Android devices charged up. Anything with a USB adapter can be charged with the Mars, whether it’s a phone, tablet, or sone thing else. 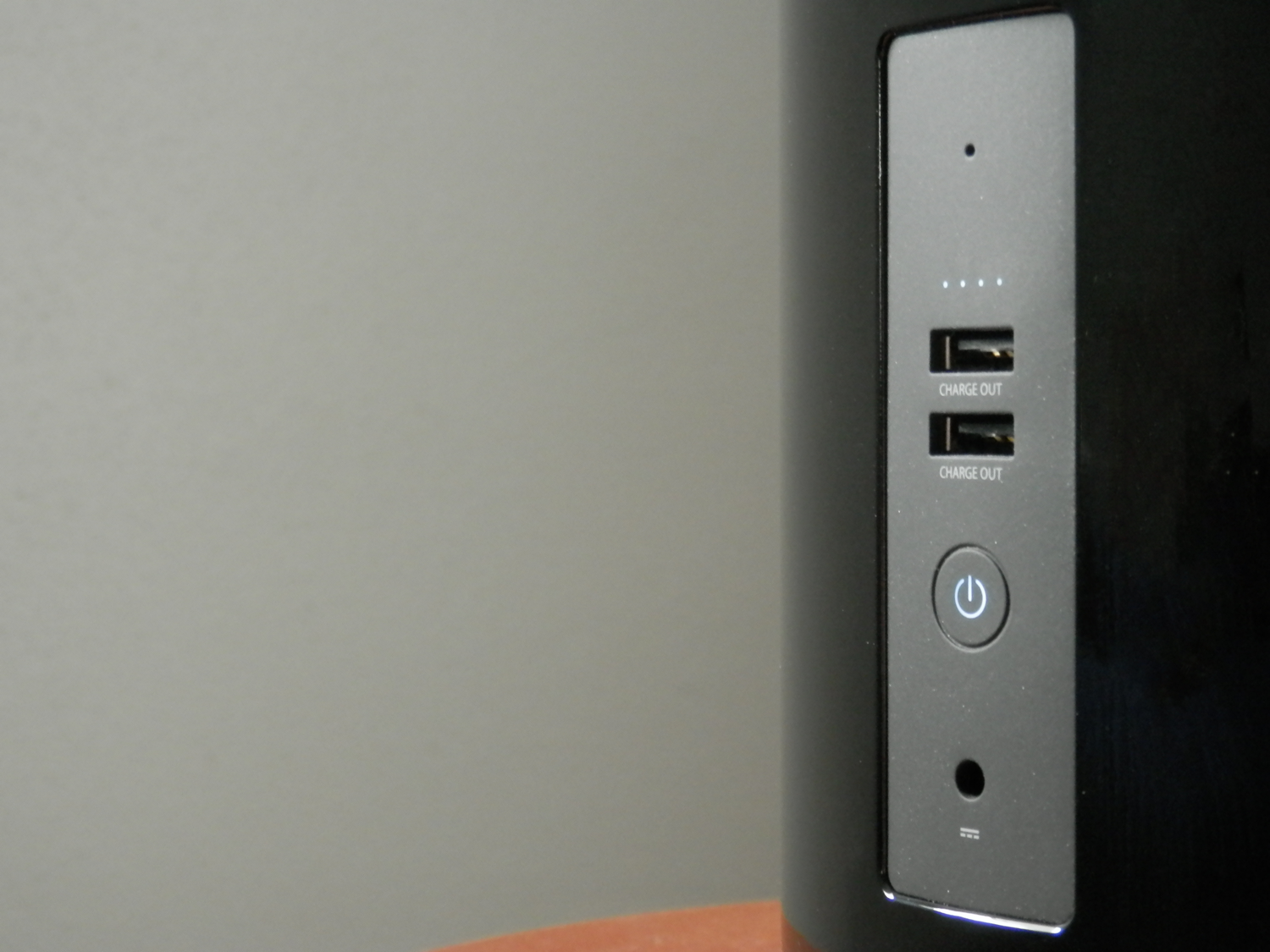 In addition, you’ll also see a reset button and a power button on the front, as well as the AC adapter plug for charging the Mars.

The tip of the iceberg: there’s still more

The Mars has a lot of unique features, including:

The fact that the tweeter speaker is removable is great because you can take it with you in a portable bag very easily. The powerful magnet inside of it can even be used to affix it to magnetic surfaces for hands-free operation. Being safe from water and elements, you can take it to the beach, or use it indoors.

With the ability to create 2.1 stereo system out of two Mars speaker systems, you can have Hi-Fi sound in no time. Combined with the ability to move up to 33 feet away over your Bluetooth connection, this system is great for keeping the sound going throughout your house, no matter where you walk, and inside or outside.

So about that app…

The Mars by Crazybaby app

The app is probably one of the most important features of the Mars that sets it apart from other Bluetooth speakers. Although Mars isn’t the world’s only levitating speaker, the app lets you remotely customize the Mars’ features right from your iOS or Android device.

After you download it for free from the App Store, you can set up pairing mode on your Mars unit and connect to it from your iOS device’s Bluetooth settings. Once paired, open the app you downloaded and you will see the Mars Speaker under your list of devices. 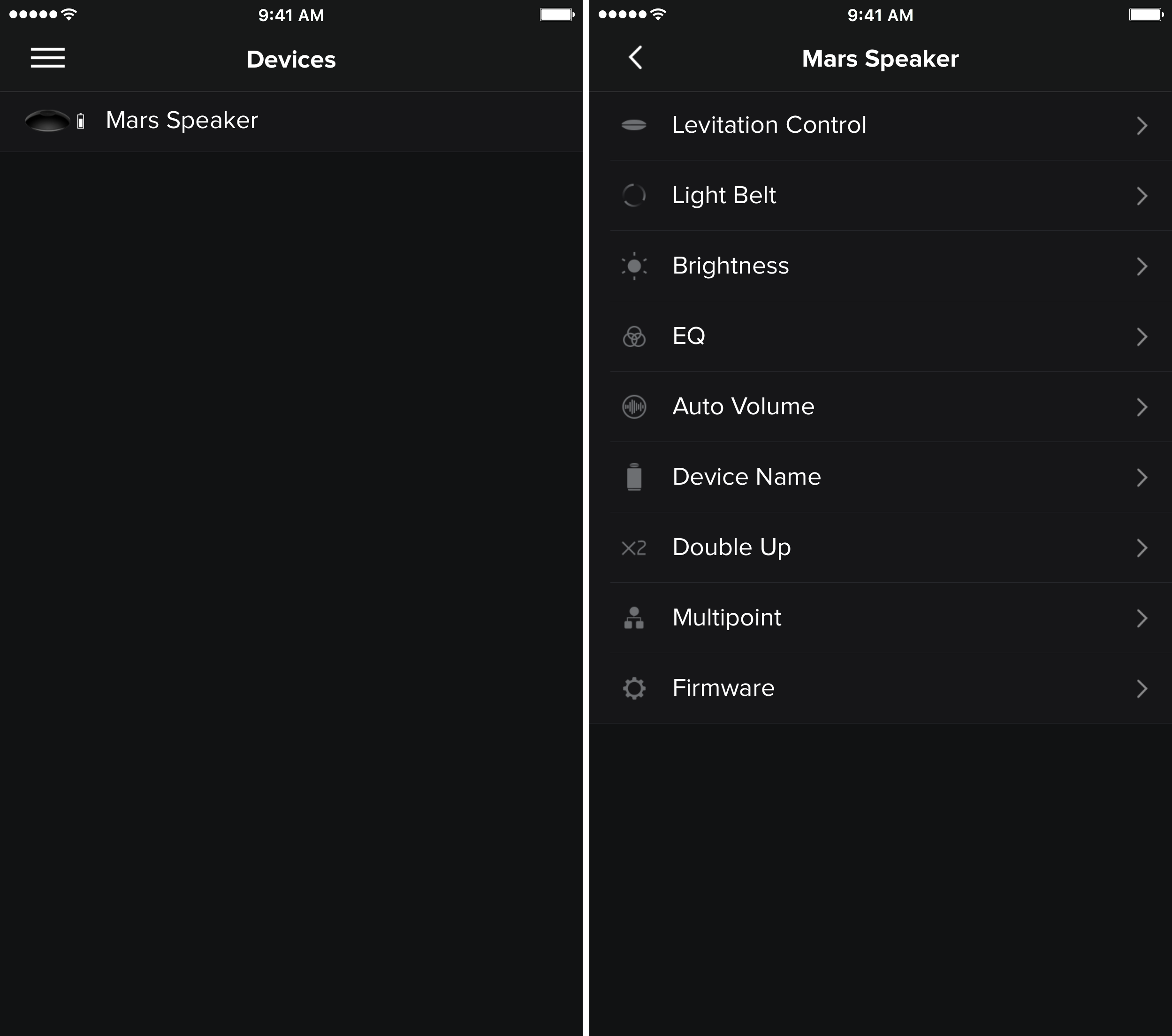 As you can see, there are a variety of things you can configure here, such as:

We’ll take you through a few of the big ones, such as the levitation controls, light belt controls, and brightness controls.

With the levitation control, you can swipe up or down on the interface and the magnet in the Mars base will then either pull down or push up the tweeter speaker based off of your input.

With the light belt control, you can swipe between multiple light patterns that will be put off by the light ring on the levitating tweeter. In our example, you see three swirls, but you can also pick from one, two, or four swirls.

And lastly, you can also see the brightness setting, which lets you adjust the light ring brightness accordingly with your lighting conditions. 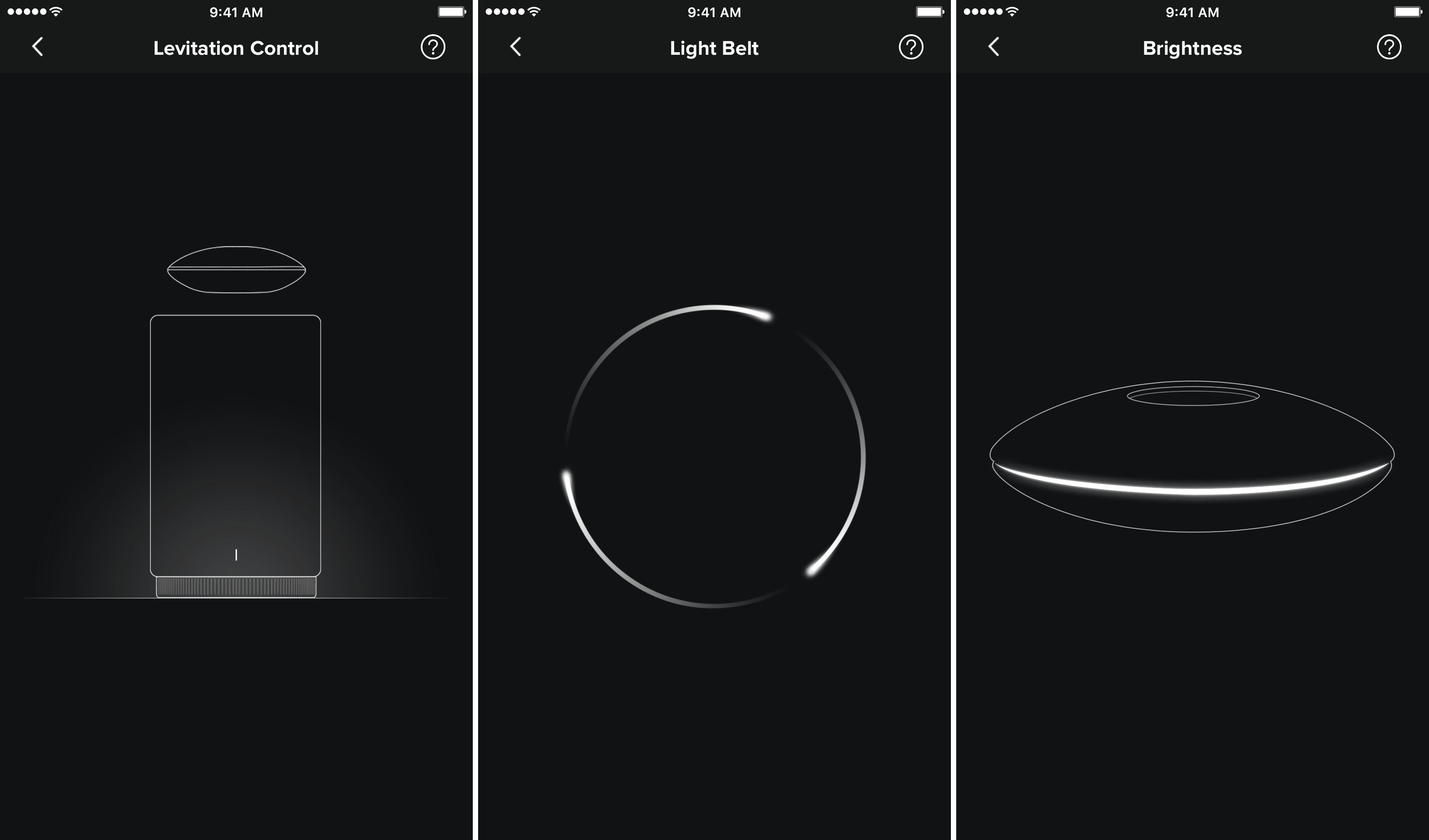 As for some more of the important things the app lets you do, you can also play with the equalizer settings to give the speaker more bass, more treble, or make the speaker more suitable for indoor or outdoor environments.

The auto-volume feature is great, because the closer you get to the speaker, the quieter it gets so you don’t blow your ears off. On the other hand, when you get further away, the volume turns up so you can continue to hear it from the other room. 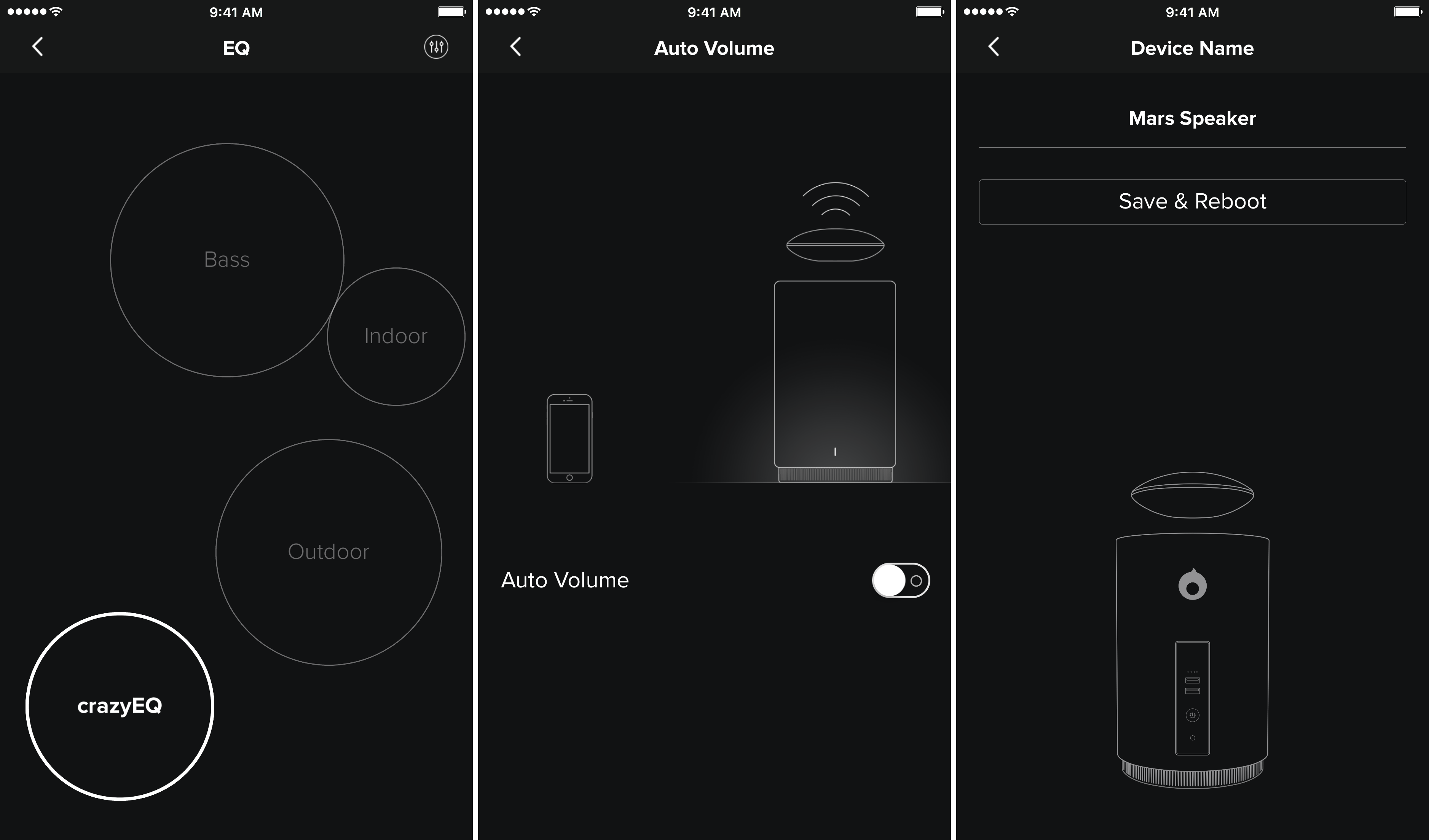 It’s also a good idea to name your device what you’d like to, so you can ensure you’re connecting to your speaker, and not someone else’s.

There is more to the app, but this is the meat and potatoes of what it has to offer.

My thoughts on Mars by Crazybaby

After having tried the Mars, and comparing it to another Bluetooth speaker of mine, I will say that the bass isn’t as boomy as I would like it to be. On the other hand, it does have a very good 360º omni-directional sound, which means you don’t have to point it in any specific direction to hear it the best.

The app is my favorite part of the Mars, apart from the levitation of course, because you can control most of the features remotely and make the Mars do almost anything you want. The levitation itself is wonderful, because without the physical connection, you won’t get any rattling or buzzing from the higher-pitched sounds as the speaker vibrates in mid-air.

The fact that the tweeter can be removed and used separately from the rest of the system is great, because the base is pretty large and heavy. Its waterproof rating makes it a great carry-around speaker for outdoor and indoor activities alike, and it can easily be stuck to a refrigerator, toolbox, car, or something else with a magnetic surface.

Despite all the positives, there is one negative: the price. At $325 for this model, or $330 for the aluminum model, it’s not cheap. We can see why however; a lot of research and development clearly went into making this work of art.

If you’re interested in grabbing a Mars, you can pick one up off of Amazon for as little as $325, and there are even some good deals on used ones that could save you even more dime.

What you’re getting is more than just a little tweeter speaker, but a full-blown subwoofer and tweeter system with a software interface and physics-boggling features.

What are your thoughts on the Mars by Crazybaby? Share in the comments!