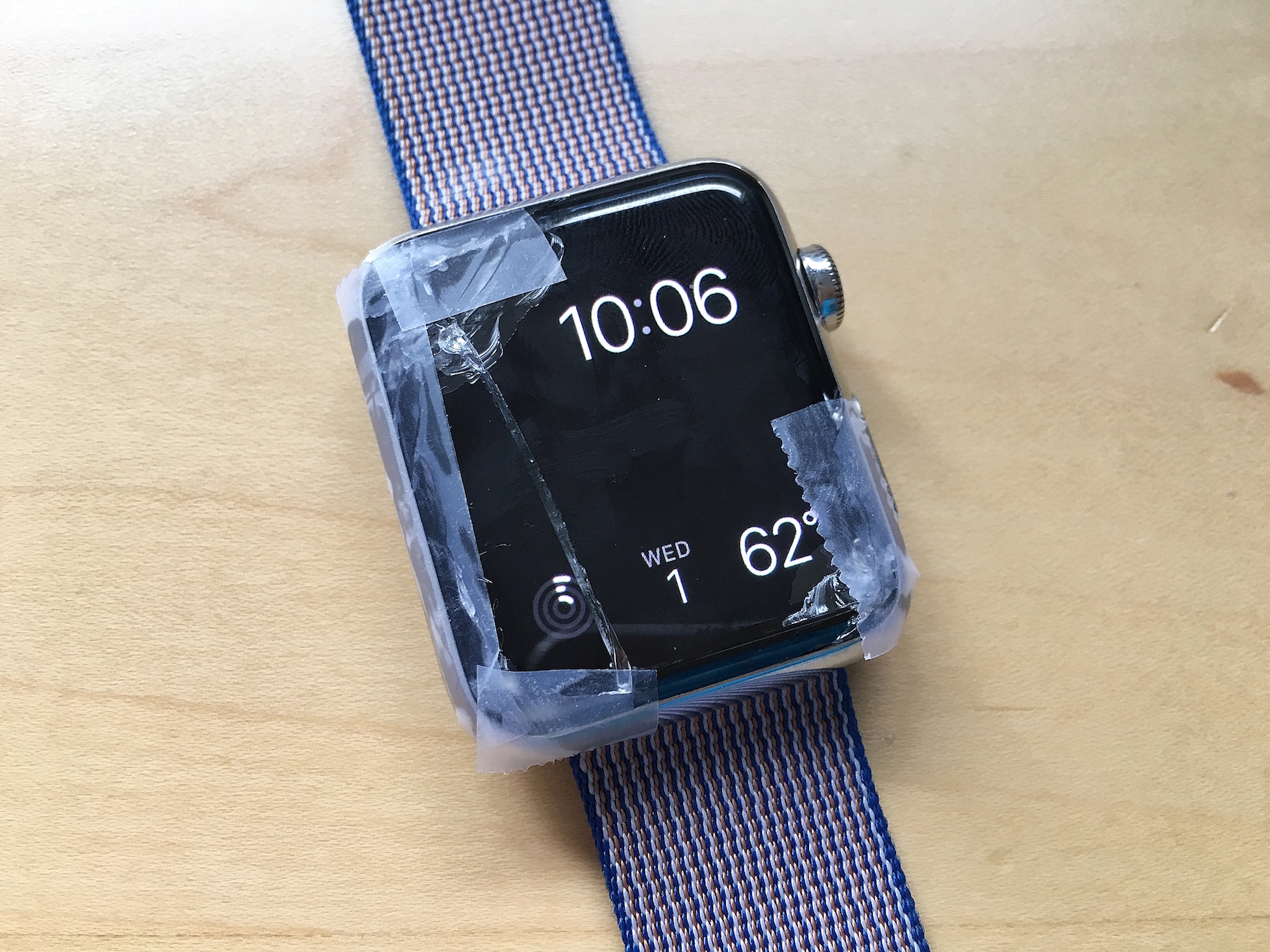 I broke the screen of my Apple Watch yesterday. Or maybe more accurately, my two-year-old son grabbed my Apple Watch as I was taking a shower, slipped and fell with the watch hitting our bathroom tile floor face down. It happened all before my eyes, although I didn’t know he was holding the watch in his hand. The strange sound I heard when he fell alerted me something wasn’t right though. My wife confirmed seconds later that the watch was what I had heard and that the screen was shattered.

Surprisingly, I didn’t even yell at my son, or lose my cool, but as I was finishing up showering, I started pondering my options. Because I don’t buy AppleCare for any Apple products I purchase, I knew this was most likely going to cost me a pretty penny. Boy was I right!

Looking on Apple’s website, I quickly found out that replacing a screen on a stainless steel Apple Watch would cost me $329, which really amounts to over half the cost of the watch brand new. There was just no way I was going to pay that amount of money to have my screen replaced, a process that would take days by the way, as the repair happens in a repair center, and not directly at the Apple Store.

Of course, I took to Twitter to voice my frustration with the repair cost, and as I expected, a few people suggested that it would have been a good idea to purchase AppleCare to cover the watch. In hindsight, yes it would have been a good idea, but in the grand scheme of things, I still think AppleCare doesn’t financially make sense, especially if you take good care of your stuff like I do.

The math doesn’t add up

Just like any insurance plan, AppleCare only financially makes sense when something bad happens, whether accidental, or just the result of things breaking sometimes. If nothing breaks, you just end up paying for nothing.

To make myself feel better about my decision of never buying AppleCare, I did a quick math to find out how much I would have spent on AppleCare over the course of the last five years. In this simple table, you see what I believe are all the Apple products I bought within the last five years (although I feel like I’m missing a few).

In the left column, you have the name of the device, and the AppleCare cost for that product. Note that AppleCare is linked to a specific device, so you cannot have one AppleCare plan covering two iPhones for example. 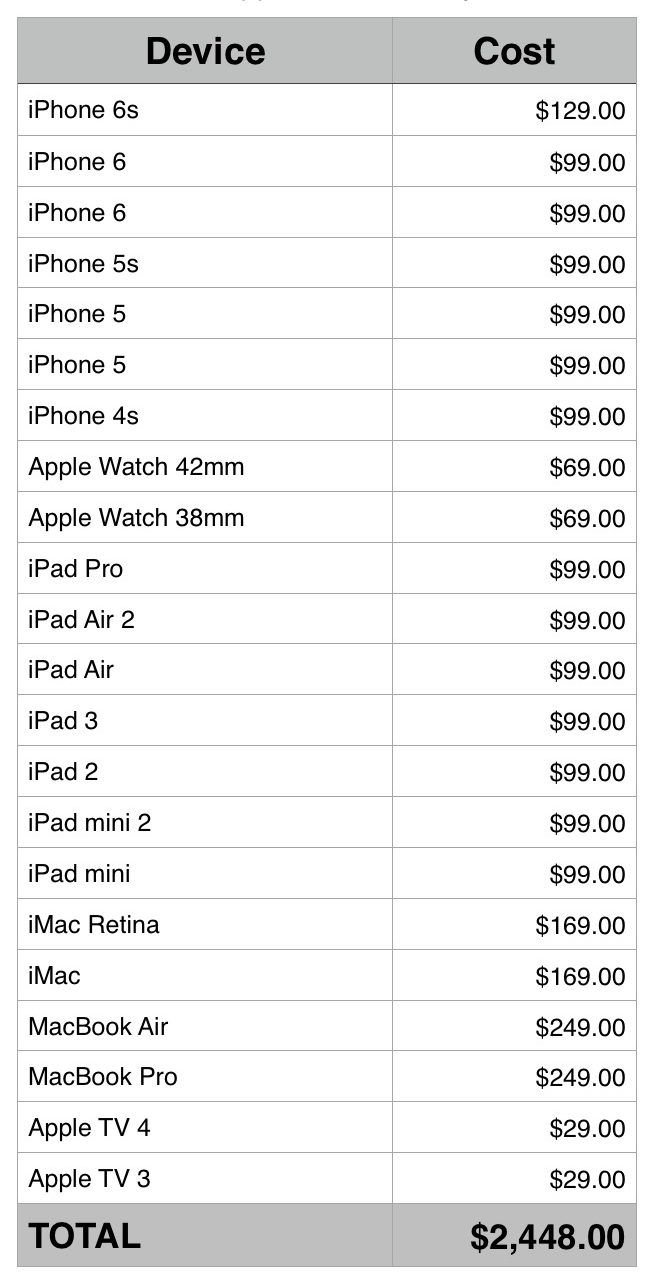 Some of you may note that these numbers aren’t accurate because you can transfer AppleCare from one device to another, and I could have, for instance, transferred AppleCare plan from my iPhone 6 to my iPhone 6s. Sure I could have done that, but the problem would be that my iPhone 6s would have ended up getting coverage for the remaining one year of ApplePlan, not for a full two years. Besides, I still use my iPhone 6, so I would have needed to keep its coverage.

I also suspect that some people think that these numbers aren’t accurate because you don’t have to buy AppleCare for all products, but just a few select ones. Well, I think AppleCare is an all or nothing kind of deal. You either buy AppleCare for all your products, or you don’t buy AppleCare at all, because what’s to say that one product is less likely to get damaged or just stop functioning properly? You can think your iMac has less chances of getting accidental damage than your iPhone, and you’d be right, but you can never know for sure, which is why I believe if I was a believer in AppleCare, I would purchase it for all my Apple products.

As you can see, the grand total amounts to $2,448. Now the question is, how much did I spend in repairs at the Apple Store over these same last five years?

Well, in the last five years, I have gone to the Apple Store for repairs only once, and that was to replace an iPhone 6 screen. The total cost for that screen replacement was $109. Add to this $329 for the potential cost to replace the screen of my newly broken Apple Watch, and you get a grand total of $438.

$438 is the cost of repairs I have completed (or could have completed since I didn’t get the screen of my watch repaired) over the course of the last five years.

There is still a difference of $2,010 that really would have been money paid for absolutely nothing besides the peace of mind of knowing I am covered by AppleCare.

Those deductibles will get you

But wait, because it gets even better than that.

People probably don’t realize that when they purchase AppleCare, but there is a deductible should you bring in your device for an accidental damage, which means you still have to pay Apple money to fix a broken screen for example, even if you’re covered by AppleCare.

Let’s take the example of my broken iPhone 6 screen which cost me $109 to get fixed by Apple.

Should I have been covered by AppleCare, here is what it would have cost me to replace that screen:

As you can tell, if I take advantage of AppleCare only for accidental damages, it’s still not as good of a deal as not using AppleCare at all and paying full price on the repair.

Wait, wait, wait! It still gets better than that!

AppleCare covers you for two accidental damages, so let’s say that I break two screens on my iPhone. This would cost be $218 to repair ($109 x 2) if I didn’t have AppleCare, but this is what it would cost me if I did have the coverage plan:

Back to my Apple Watch…

Cost of AppleCare for Apple Watch is $69, plus $79 for accidental damage repairs. So yes, this is the perfect situation where AppleCare would have been a great deal because I could have gotten a brand new screen for $148, instead of the $329 I was quoted by Apple.

But again, if I apply my reasoning that you either get AppleCare for all your devices, or you don’t get AppleCare at all, I’m still better off not having ever purchased the coverage plan.

AppleCare is more than just an accidental repair coverage

I just took the example of a broken screen, which really is the most likely reason why you’d want AppleCare. But to be fair, AppleCare is still a great deal if you downright destroy your phone or dunk it under water. In this case, there is no possible repair, and you get to get a new iPhone under your coverage plan. This is, to my knowledge, the only real advantage of using AppleCare.

I understand that this post only treats AppleCare as a coverage for accidental repairs, but I must note that I am aware it is much more than that. It is a great way to not have to worry about your Apple products for the next couple years (or more) as it also covers hardware failure and more. For example, if you buy a $249 AppleCare coverage for a MacBook Air and need to have the screen or logic board replaced two years down the line, this is still a good deal.

Yet, in my years of Apple experience, I never had such an issue where AppleCare would have helped. My five year old MacBook Air and iMac for example are still running perfectly. Again, this reinforces my idea that, in the grand scheme of things, I am better off not buying AppleCare.

Wondering about my Apple Watch?

I decided not to get my Apple Watch repaired because I believe the $329 price tag is just ridiculous. Instead, our Dealmaster Cody helped me find a great deal for a refurbished stainless steel Apple Watch for only $349 (no tax). Yes I know it is refurbished, but so would be my Apple Watch if I had sent it to Apple for repair. Furthermore, with this refurb, I get 90 days of extra warranty (hopefully enough to get me to Apple Watch 2), an extra charger, and a new band. Not a bad deal in the end.

Of course, I could have chosen to go with a Sport model, but these look too utilitarian to me. Call me a snob if you want! Besides, even refurbished or open box Apple Watch Sport weren’t that much cheaper as the best I could find was $299.

I also look on Craigslist and there was no good deal around me.

Make the decision that’s best for you

At the end of the day, I don’t want to influence your decision in purchasing AppleCare coverage or not, because it really depends on how many Apple devices you own, how you use them, how often you upgrade them, etc.

I know for me AppleCare doesn’t financially make sense. But I’m sure some of you have stories to share about how AppleCare might have saved you thousands of dollars.

Now tell us: do you buy AppleCare? If so, do you buy it for specific devices or all of your devices? Any success or horror story to share?