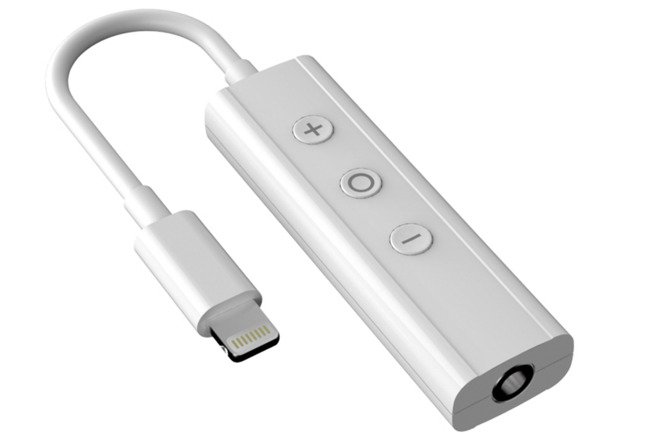 Apple is widely believe to remove the more than century-old 3.5mm analog audio jack from the iPhone 7 in favor of Lightning-enabled headphones and wireless Bluetooth headsets. Chinese vendor Tama Electric is advertising at Computex 2016 in Taipei the first Lightning-to-headphone that would let folks connect their existing analog headphones based on the 3.5mm audio jack to the iPhone 7.

The listing was first discovered by the oft-reliable Japanese blog Mac Otakara.

The Lightning-to-3.5mm-audio adapter, appears to be MFi-certified (it’s more likely that it’s being prepared for certification) and is rather bulky in appearance.

It has a male Lightning connector on one end and the standard 3.5mm audio jack on the other, with built-in volume up/down controls and the power switch. These products are not available for purchase yet and have no price tag attached them.

Vendors often build iPhone accessories based on rumors in the hope of being first to market when the new handset releases. Putting aside for a moment the fact that this particular vendor is actively advertising its unsanctioned accessory, it very existence offers a sign of things to come provided the rumors are true.

If the 3.5mm audio jack is really going to be ditched on the iPhone 7, Apple will likely include a wired, Lightning-based edition of its EarPods in the box, with a wireless, Bluetooth-driven version of the headphones likely to be an optional purchase.

Apple could also drop a 16GB SKU from the iPhone 7 lineup, replacing it with a 32GB base model, and is said to be moving to a three-year iPhone refresh cycle, abandoning the tic-tock cycle that has served it so well in years past.