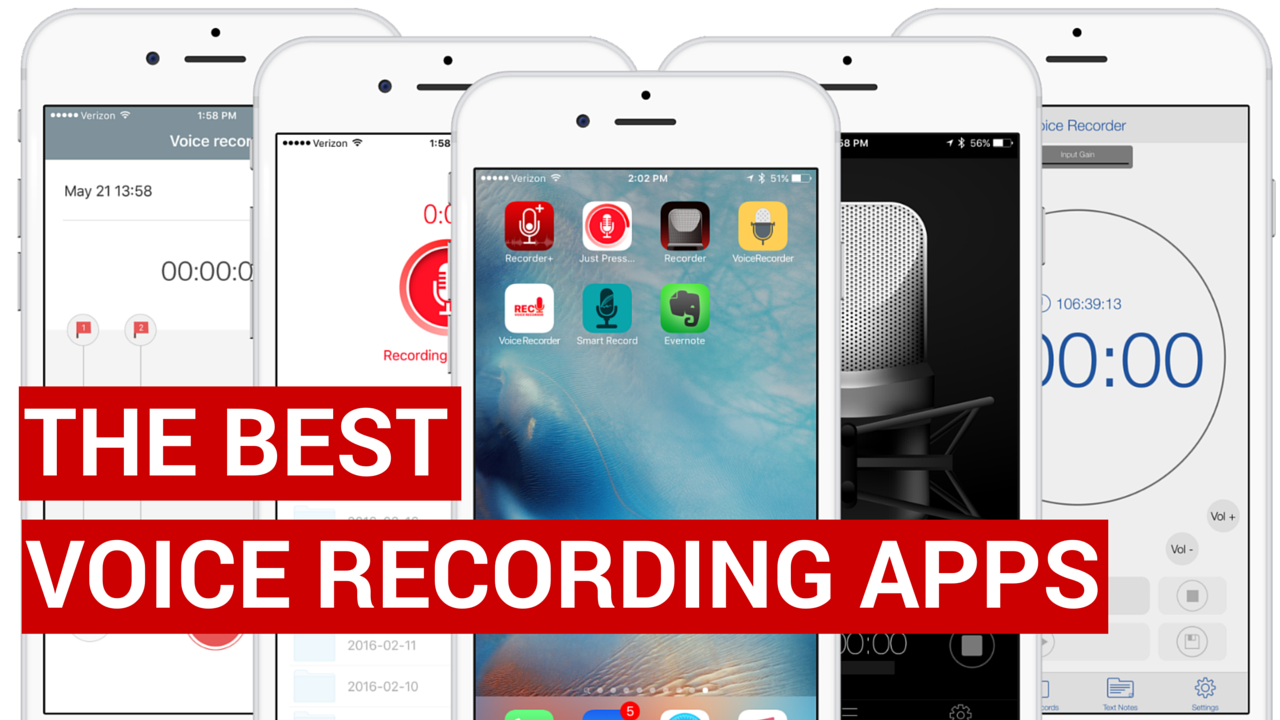 Students who record lectures, business users who record meetings, or an aspiring artist who records ideas on the go. There are many different people use, or could use, a voice memo app. Apple does include a stock application, however its features are rather limited. To break through the crowded hodge podge that is the App Store, we went searching for some of the best voice recording apps for iPhone and iPad.

Audio recorders in particular are very hard to narrow down. There are just countless offerings from large companies, to one off developers. There was a number of different criteria that went into our ranking. This includes: format options, quality, cloud storage/export options, and any other unique features they may include. 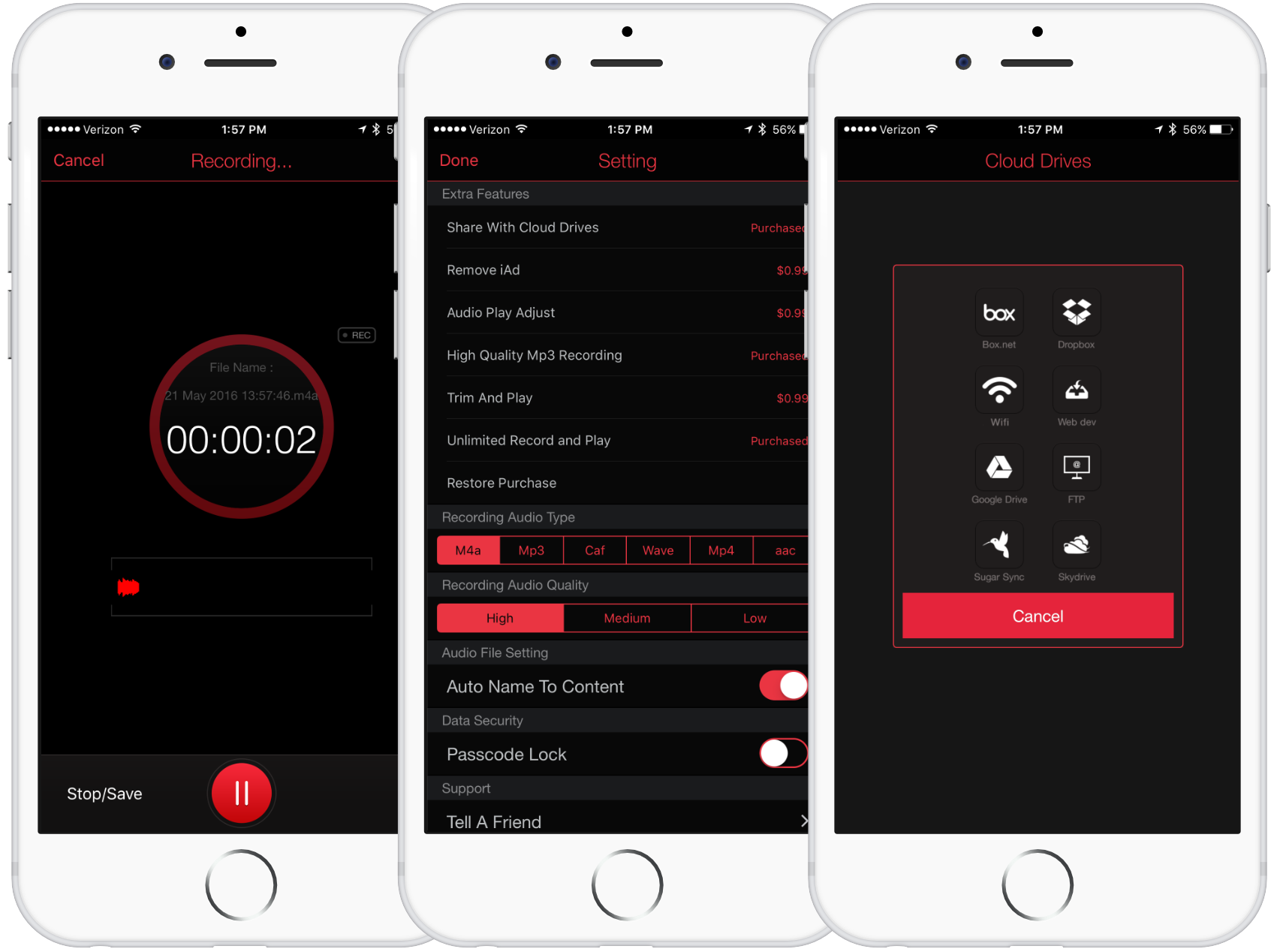 Recorder Plus is my recommendation for best professional recording app. The UI is modern, if not a bit cluttered at times. The app itself is free, with a huge variety of features available as in app purchases. This can be good and bad, depending on how you look at it. On one side, it allows you to try the app, then unlock only features you would use. So you don’t have to pay for extraneous options. But on the flip side, if you purchase everything, it winds up being the most expensive option on the list.

The wealth of features here is fantastic. It offers all formats you could want. There are 8 cloud drives you can tie into to store your files as well. Inside the app it offers decent organizational options such as custom file names and folders. When you playback your recordings, you can change the speed, as well as trim them if need be.

While it does offer the ability to lock the app and protect your recording, it doesn’t support Touch ID. That is one thing I expect these days in any app that is password protected, however not many others include password protection, let alone Touch ID, so it isn’t as if this is behind the competition. 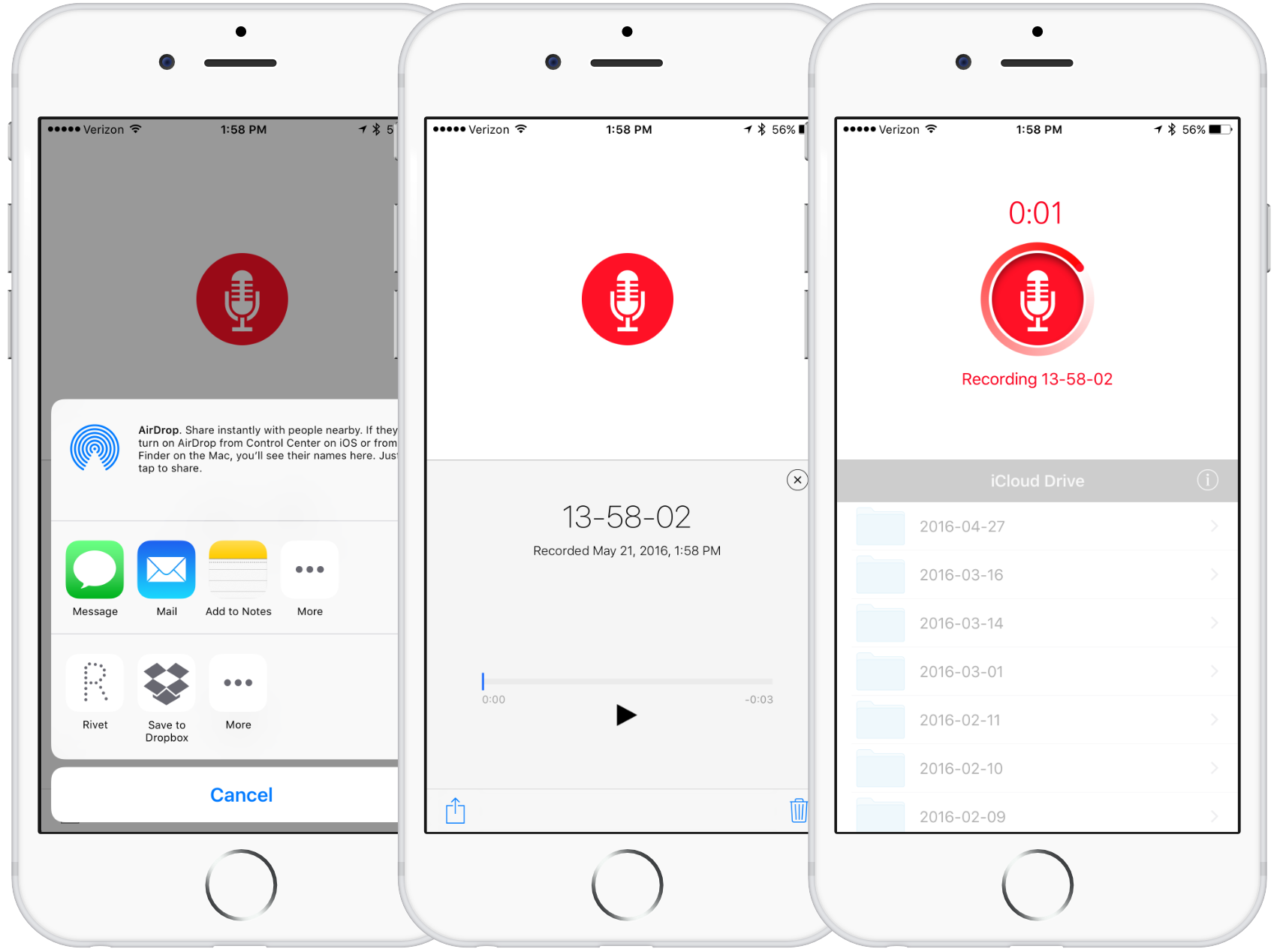 While Recorder Plus is a fantastic app, has a wealth of professional features, it isn’t always my go-to app when I need to make a recording. That honor gets bestowed upon Just Press Record. There is something about how dead simple this app is. So simple, there isn’t even a settings menu. What do you do? You literally, just press record.

The app doesn’t mess around with different recording formats, or qualities. You just get high quality M4A (AAC) audio files. You don’t have a bunch of in-app purchases either. When you buy the app you get everything out of the box.

Just Press Record also takes advantage of the newest features in iOS and the Apple ecosystem. It features 3D Touch on iPhone 6s to start recording right from the home screen. On iPad, it works with multitasking. You can use the app in split screen, while taking notes alongside. Instead of simply storing files locally, it saves everything on the fly to iCloud Drive. You remove it from the app, you remove it from iCloud Drive. That makes it available instantly on any device you own. So you record, and it shows up on your iPad and Mac without you having to lift a finger.

What is also handy, is that the iOS app includes iPad, and Apple Watch support. So you can actually create recordings from your wrist. On the Mac, they have a separate app available. So you can use that to create and view your recordings as well.

What I am really saying is, for the casual user this may be the best app. You just don’t get to have much configurability. 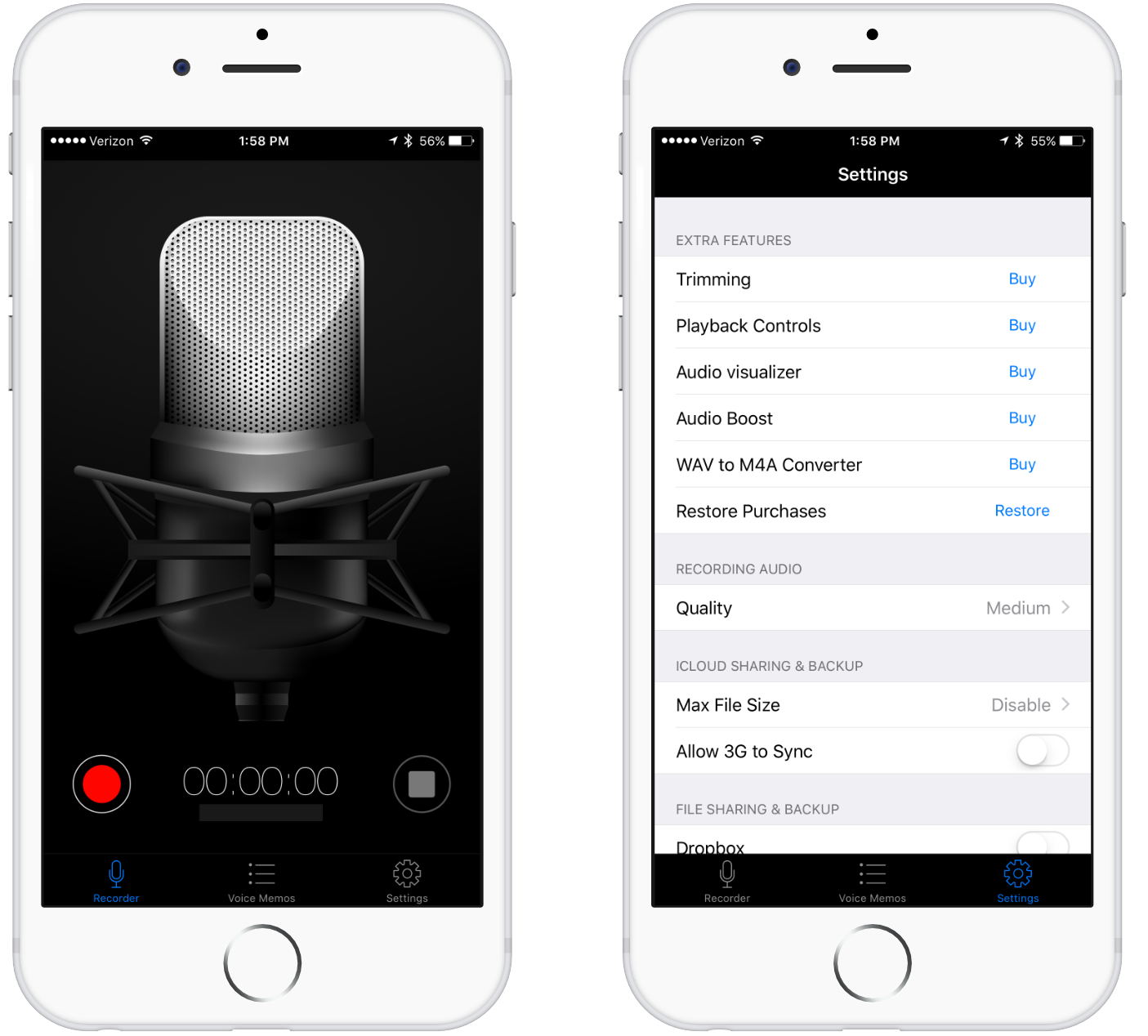 Voice Recorder HD is a really great voice recording app. It has a wealth of features, though a UI that is a bit dark and skeuomorphic for today’s design aesthetic.

It has a relatively low barrier to entry, with most features coming in for the single $1.99 purchase price. Inside the app there is limited organizational features aside from custom names for the files. You can choose which quality to record in, however if you want M4A support, you must purchase it via in-app purchase.

It doesn’t support iCloud Drive but you can sync all of your files to a linked Dropbox account which could even be more ubiquitous and allow more accessibility.

Another notable feature is Audio Boost. This helps reduce background noise, and amplify voices for those that talk quietly, or are far away from the mic.

Lastly, this also supports Apple Watch to record straight from your wrist. 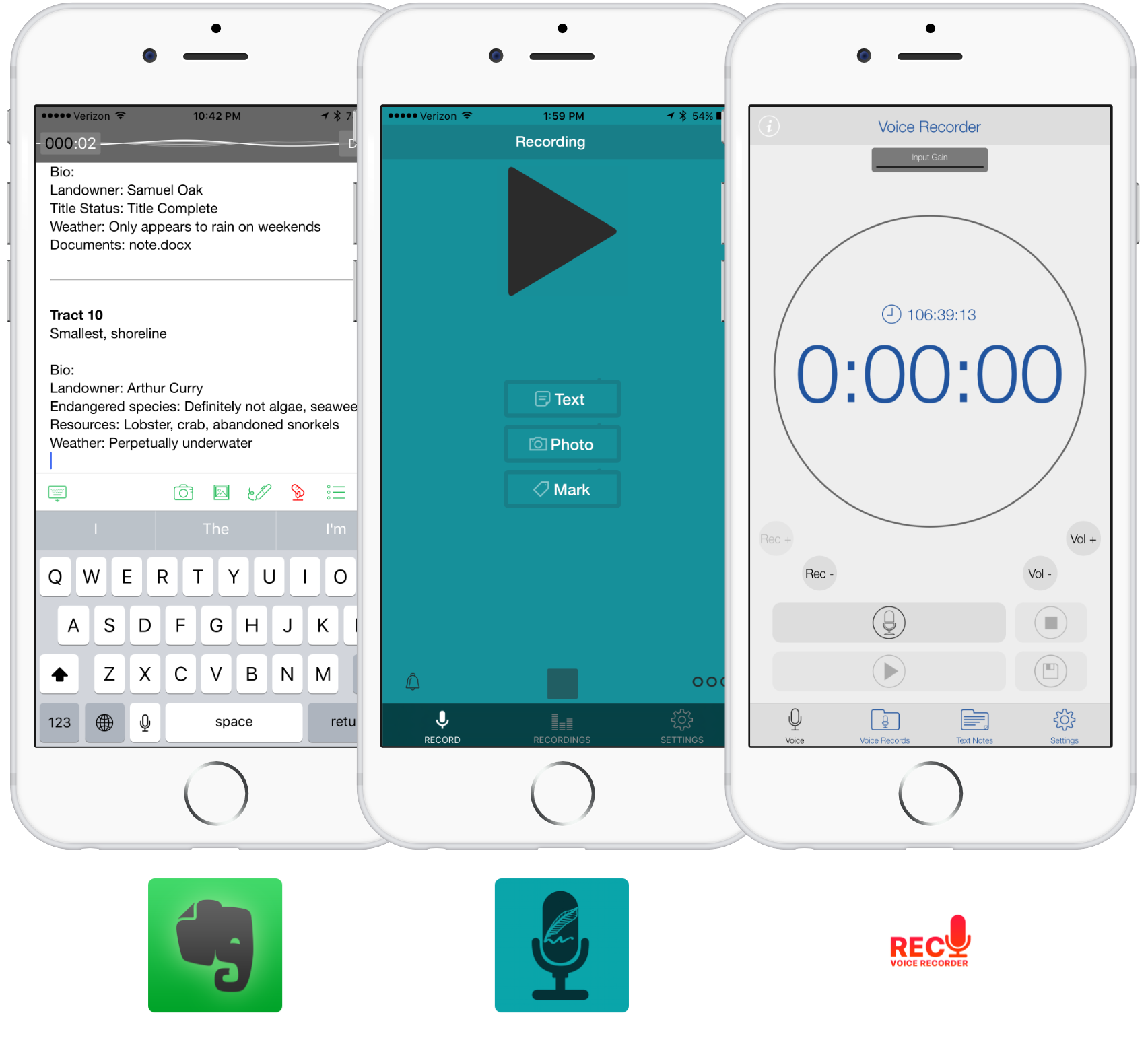 360 Writer – Audio Recorder is a handy tool that has some useful features not present in others. For instance, you can set up a recording reminder. So maybe you always need to record your Discreet Mathematics lecture, every day at 10am. You can set this in the app to remind you at that time, to start recording the lecture.

It has new iOS features like 3D Touch on newer Apple devices so you can record from your Home screen. Handily, one of the best features is the ability to add text, images, or markers inside the recording. So if you recorded an hour long meeting, you could take photos of the presentation, then on playback, see that image and the time stamp it is relevant.

If you’d like, you can have them transcribed, however this is a surcharge, available for $1.00 a minute.

Evernote is commonly known as a way to take notes. Lots and lots of notes. That is still absolutely the case. However, they added not long ago the ability to tie voice recordings.

This means you can easily be recording a lecture, while taking written notes at the same time, and tie them together. Since this is Evernote, all the features come with great syncing to any device that they support.

This app looks a little clunky, but it has one killer feature that makes it worth consideration. That is the ability to convert your audio notes, to text. It supports 44 languages, and in my testing, works fairly well. Both audio, and text notes are stored inside the app.

While these apps did made it, this by no means is an exhaustive list. There are many more voice recording apps for iPhone and iPad that are still out there that we didn’t touch on.

Do you have a particular voice recording app that you really enjoy? If you do, let us know down in the comments, as well as any suggestions on which type of apps we should cover next.