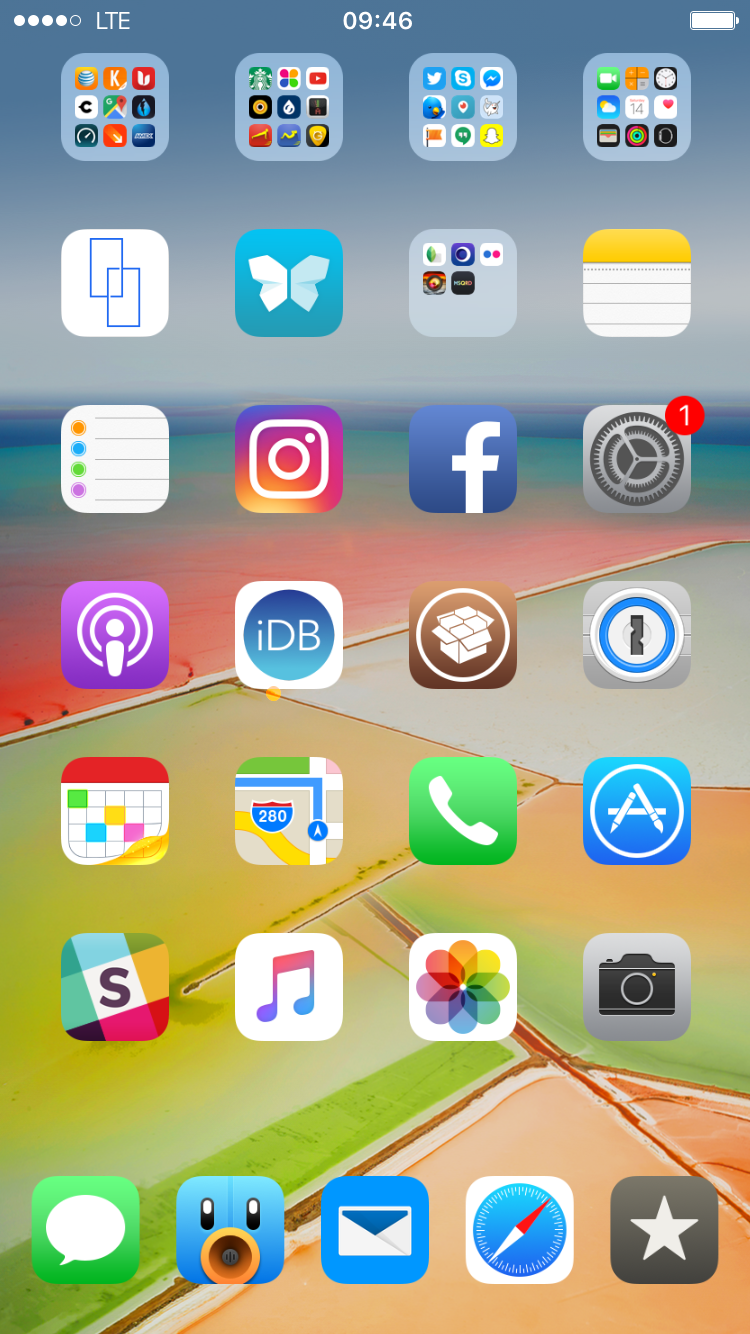 “Show me your Home screen and I’ll tell you who you are.”

Indeed, the Home screen is a very personal place that reflects who we are and how we use our devices. The way we organize apps and folders can tell a whole lot about our personality, and so does our specific choice of apps.

I’ve been asked twice this week to share a screenshot of my Home screen set up, so I figured I might as well share with all of you and explain the rational behind the placement of icons and the overall layout, and of course, the specific apps I use.

While I don’t use themes anymore, I do enjoy having a Home screen that doesn’t look like a standard iPhone, mainly because the Home screen hasn’t changed much since the first iPhone came out in 2007.

In order to keep the spirit of iOS going while still making it my own, I rely extensively on Springtomize 3, a jailbreak tweak most iDB readers are familiar with. To get to the overall look you see on this screenshot, I apply several settings in Springtomize:

No drastic changes there, but enough to make the Home screen my own, and give it more room to breath, which is mostly attributed to the resizing of icons and the removal of app and folder names.

Having five icons in the dock is not just a practical choice, it’s also a design one as it breaks the monotony of the rest of the layout.

One screen to rule them all

Historically, I have tried to keep all my apps and folders on only one screen, meaning there is only one page on my Home screen. That’s something easy to do when I get a new iPhone, but I eventually end up breaking that rule as months go by and I start testing more apps.

The second page of the Home screen is sort of a temporary place for apps. Those that are here to stay end up in a folder or in a prominent place on the first page, others will stay in limbo on the second page until I move them to a folder or delete them.

Apps have to own their spot on my Home screen

As you can see, there isn’t much logic to the placement of my apps, but that is just in appearance as I do have actual data to help me figure out where some of these apps go. More on that later.

The first row at the top is just folders and quite frankly, they contain apps I don’t use on a daily basis.

The first folder is called Productivity, although it contains more than just productivity apps. This is where the majority of my apps live. It holds all my productivity apps, but also utilities and apps related to finances.

The second folder is called Fun. This one contains anything related to entertainment, health and fitness, music and video.

The third one is called Social and houses all my social media apps. This is one folder I actually don’t use much.

The last one in the top row is called Crapple and it contains all Apple apps that come pre-installed. The ones I use the most are on the first page of the folder. The rest is mostly apps that never get opened such as Tips or Find My Friends.

I also have another folder for photo-related apps. This folder is a survivor from my iOS 8 days, when I spent much more time shooting and editing pictures. Apps in that folder could be moved to the Fun folder, but I guess I’m still hopeful I will pick up iPhone photography again soon.

I suggested above that I do have data to support my choice of apps that make it to the Home screen. To be more specific, I use a jailbreak tweak called App Stat that keeps track of your most frequently used apps. App Stat ranks apps depending on the amount of time you launch them, or by time spent in apps. This helps me have a very accurate picture of what apps are most important to me.

Using App Stat helped me select what apps should be in my dock, and which ones should be in thumb reach. I understand people have a pretty good idea of what apps they use the most, but App Stat makes this perfectly clear and can sometimes help you realize you use one app much more often that you would have thought.

To wrap up, I use that data to help me pick apps for the dock and the bottom two or three rows to make sure my absolutely most used apps are always in thumb reach.

I do make an exception for Maps, which I don’t use very often, but I do want it on the Home screen and easy to get to in case I quickly need to get directions, when driving for instance.

I’m not going to mention all apps in my folders, but I will share the ones on the Home screen, from top to bottom.

LongScreen: an app that helps you stitch screenshots together. $3.99

Scannable: the quickest way to scan documents and sent them to Evernote or share them. Free

Notes: this is my go-to app for jotting down ideas, or typing posts to be published on iDB, such as the one you’re currently reading.

Reminders: another stock application, which still fits my needs better than most third-party alternatives.

Instagram: my most used social network after Twitter. And the app icon looks fantastic too. Haha. Free

Facebook: I force myself to put Facebook on the Home screen so I can keep up with friends and family that are overseas. Free

Settings: because I like to tinker with just about everything on my iPhone.

Podcasts: another stock application that fits my needs just fine.

iDB: this app helps me keep in touch with my favorite Apple blog. Free

Cydia: although there aren’t many new tweaks these days, it’s still a must-have on the Home screen.

Maps: as mentioned before, I want to have quick access to it, just in case.

Phone: admittedly, this one could easily be in a folder because I rarely make phone calls.

App Store: like everybody else, I’m always on the lookout for a cool new app.

Slack: this one helps me communicate with everybody at iDB in a semi professional environment. Free

Music: sure the UI is terrible, but I do love having virtually all the music in the world at my fingertips.

Photos: on a day to day basis, this is an app I use mostly to handle screenshots for posts on iDB.

Camera: I used to use third-party apps, but these days the stock camera app works just find for me.

Messages: most of my friends and family use iPhone, so Messages is definitely one of my most used apps to communicate with them.

Safari: my browser of choice both on Mac and iOS.

Reeder: still the best RSS reader out there despite the lack of update or new features. $4.99

When it comes to wallpapers, I usually settle for one and keep it on for months. The one I have right now was actually featured not long ago in our wallpapers of the week section, which is carefully curated every week by Jim.

Because the Home screen is covered with apps and doesn’t leave much room to really appreciate what’s on the wallpaper, I usually choose abstract wallpapers that look good regardless of how many apps are covering it.

That wraps it up for what’s on my Home screen. If you’re curious about the setup of other iDB editors, then keep your eyes peeled as they will be sharing theirs in the following weeks.

Do you want to share your set up with other readers?

If you want to share your set up, feel free to send us an email, and if your post is carefully written and edited, we may publish it on the site. I can’t emphasize enough that to be considered, your post has to be well crafted and free of typos and other grammatical mistakes.

And as always, feel free to chime in and share with others in the comment section below.