You may have heard that the best security is something that lays in plain sight. In some instances, this can be right, because people tend to over-think things.

A jailbreak tweak called Callisto is now available in Cydia’s BigBoss repository for $1.49 that lets you use the current time for a passcode instead of something you set for yourself.

In this review, we’ll walk you through how it works and show you all of the settings it comes with to make life more comfortable for passcode input.

It’s time to change your passcode

Okay, the pun above may have left the room in silence rather than roaring with laughter, but that’s besides the point. Callisto is a tweak that lets you use the current time as a passcode on your device.

The idea isn’t a new one; in fact, we’ve already shared a similar tweak called TimePasscode, which essentially does this as well. On the other hand, TimePasscode and TimePasscode Pro were both never updated for iOS 9, and so they don’t support the six-digit passcode functionality.

Callisto comes in to the rescue for anyone who loved this tweak because it not only supports iOS 9, but it also comes with features to work around your six-digit passcode such that you don’t have to downgrade to a four-digit passcode to enjoy the tweak.

Callisto works on all iPhones, iPod touches, and iPads running iOS 8 or iOS 9, and it’ll let you use a relatively liked method of keeping your device safe. In a way, this tweak is similar to keeping yourself from getting locked out of your house by keeping a key under the front mat.

After you install Callisto, it’ll automatically detect your passcode when you enter it for the first time. From then on, you can start using the time to unlock your device instead. For example, if it’s 5:06 PM, you’ll enter 0506 as the passcode.

Callisto also has some interesting twists you can put on the passcode for security purposes if you are using a six-digit passcode, but we’ll touch on those when we go over the settings Callisto comes with for configuration.

Callisto will add a preferences pane to the Settings app. From here, you’ll find a number of options you can configure to make your passcode input easier for you: 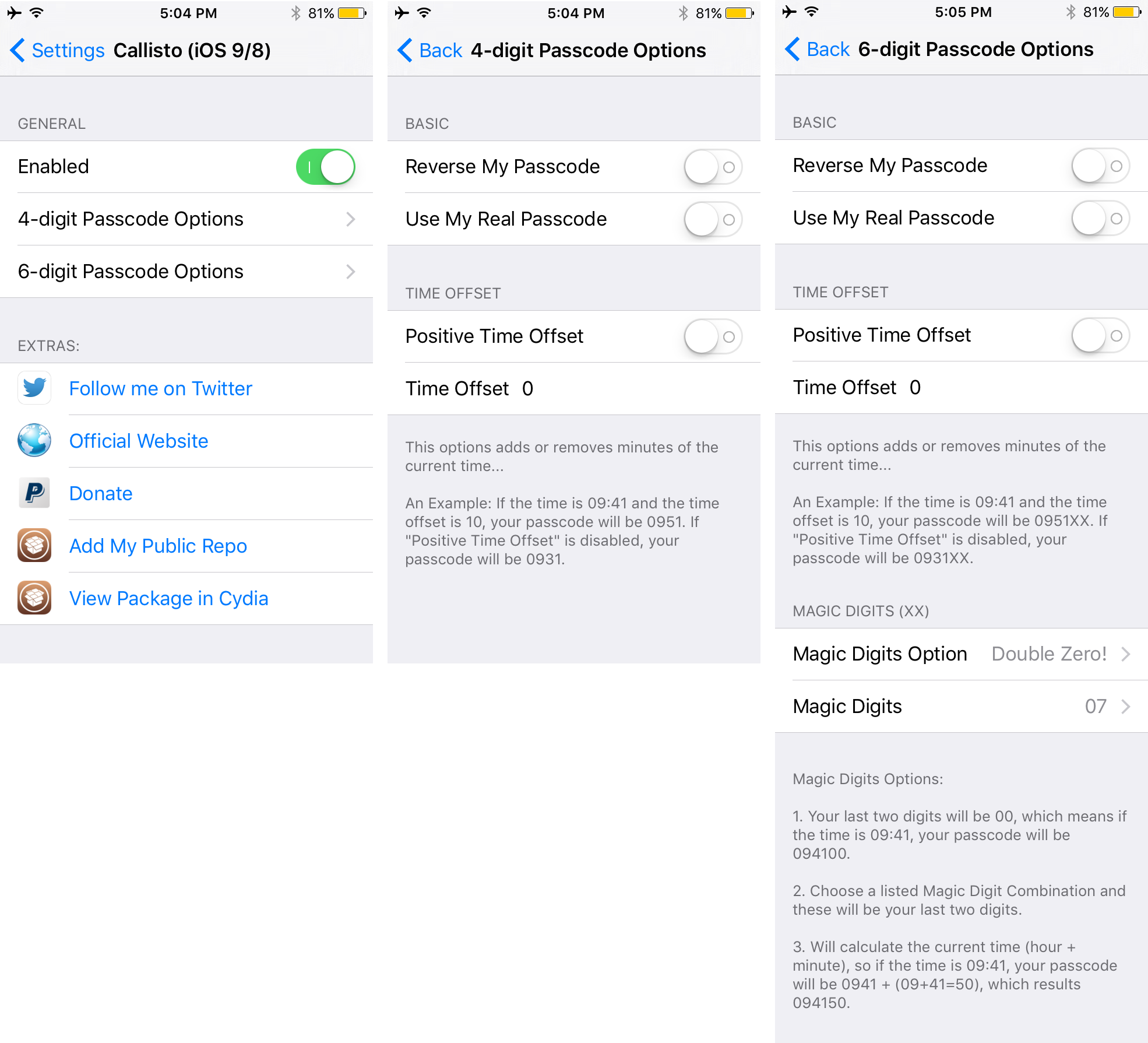 Here, you can enable or disable the Callisto tweak at any time that you wish. You’ll also find some options you can change to your liking based on whether you’re using a 4-digit or 6-digit passcode.

With Magic digits, you can:

My thoughts on Callisto

Callisto is a great resurrection of the time-based passcode tweak I fell in love with a long time ago. I think it’s absolutely clever to use your time as a passcode because it’s forever changing. Moreover, who in the world would ever think that the current time would be your passcode?

The additional options, such as magic digits and passcode reversal, also help to further secure your device if you think someone is going to guess it, so from a security standpoint, I think it’s a decent option to choose for your device.

The developer also notes that the tweak works with both 12 and 24-hour format, so no matter how you use your device, this tweak will work great for your time-based passcode needs.

Callisto, which can be had on any jailbroken iOS 8 or iOS 9 device from Cydia’s BigBoss repository, is just $1.49 and provides a unique way to have a revolving passcode. I personally like the idea because your passcode is hidden in plain sight, and people are generally too oblivious to notice.

What are your thoughts on Callisto? Share in the comments below!