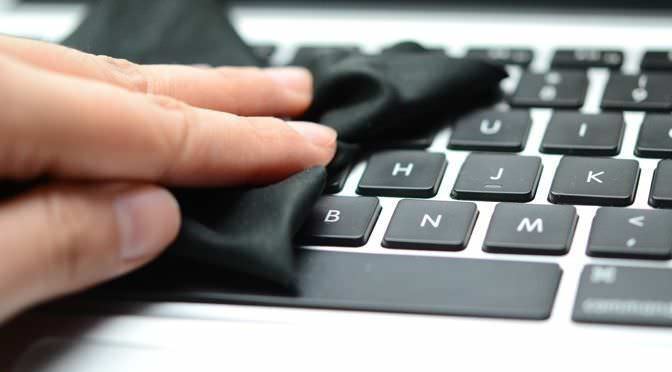 Your Mac, iPhone, iPad, Apple Watch, and/or any other other fancy high-tech devices you have are fun to use, but they’ll easily get dirty and collect dust, sneeze splatter, and bacteria from your fingers over time, whether they’re used frequently or not.

To combat grime, you can clean your devices every so often, but like anything else, there’s a right and a wrong way to do this.

In this piece, we’ll share with you some handy tips for cleaning your Mac and other Apple devices safely so you don’t accidentally damage them.

The gross realities of every day device usage

As you use your Mac, you’re constantly breathing, sneezing, coughing, talking, and doing other things. As you do, moisture and particles from your body will spatter onto the display and other parts of the computer. If you turn your screen off, you might see little round dots that appear to be dried fluid.

Also, as you use your keyboard and trackpad, or even your touch screen on your mobile or wearable devices, you’re spreading the bacteria that you touch throughout the day to your machine and its input devices. You also smear face bacteria and oils all over your iPhone as you talk on the phone, and your arm sweat rubs on your Apple Watch.

If you let anyone else use your Mac or mobile devices, their germs are just going to spread on to you from your keyboard, track pad, and touch screens.

Yeah… doesn’t sound too appetizing, does it?

You should be cleaning your devices every so often not only so they look spick and span, but also to prevent unwanted spread of bacteria and germs from infecting you.

Cleaning your Mac and Apple devices 101

Although the guidelines for the right and wrong way to clean a device are mostly common sense, I see people wrongly cleaning their devices all the time and it makes me cringe. Here are some of the tips you should be following:

This is one of the things I see people failing to do all the time. It seems like I always witness people carelessly spraying Windex, rubbing alcohol, and other solvents onto their screens and devices to clean them up of bacteria and other forms of germs.

The fact of the matter is, these chemicals are very harmful to your device. They can break down the oleophobic coating on your touch screen, which helps resist fingerprints, and they can also ruin the anti-glare coating on your Mac. Reaching further than the displays, the fluids can penetrate the device’s open ports and slots, potentially causing water damage to your circuitry and device internals.

In almost every circumstance you should avoid using any liquids near the product, unless it’s completely unavoidable. If you do have to use fluids, you should spray the cloth you’re using to wipe the device, and not the device itself. This will help prevent fluids from running along the cracks and crevices of your device and working their way into the hardware.

Moreover, plain water is typically good enough for the cleaning job. There’s no need to introduce potentially harmful chemicals to the surface of your expensive equipment.

Use safe cloths only

Believe it or not, not all cloths are the same. There are microfiber cloths, lint-free cloths, towels, paper towels, bathroom tissue, and many other kinds of wiping materials people will try to use to clean their devices.

You should avoid anything that’s going to come apart on the device while you’re cleaning it. For this reason, you should avoid using towels filled with lint, such as ones you’ve used previously for dusting, and you should avoid paper towels and bathroom tissue because they can tear and pieces of it can become lodged in your device (especially if wet).

Apple recommends a lint-free cloth, and microfiber cloths made for cleaning screens, such as these cloths on Amazon for $9, work great for cleaning your Mac or iPhone’s screen. If you’ve ever bought a high-end screen protector or case before, then you probably already have some of these laying around and won’t need to buy more.

Never use anything abrasive, which would have a sandpaper-like surface to it, as it will ruin your screen or aluminum finish.

When cleaning your device, whether it’s a Mac or an iOS device, you should disconnect all peripherals before you begin the cleaning process.

This not only helps prevent you from accidentally knocking things over when you lift your Mac up from its desk, but it also prevents wires with electrical power running through them from causing any kinds of electrical shorts, which would ruin the device.

In addition to unplugging cables, I’d go a step further and power the device down so that when you use any kind of moist lint-free cloth, you do so in a fashion that will be the most safe. Nothing good ever comes from getting electronics wet, but you reduce chances of damage when the device is powered down.

Fortunately, many of Apple’s modern mobile devices, like the iPhone 6s/6s Plus and the Apple Watch are water resistant, but Apple’s Mac lineup and many older iOS devices do not have such a luxury. As a result, it’s a good rule of thumb to simply avoid using any kind of liquids. Just be careful in the selection of the towel you use for wiping, and make sure to take precautions to protect your machine before you start cleaning it and everything should go fine.

How do you usually clean your Mac and other Apple devices? Share in the comments below.