As our own Sebatien recently explained, force-quitting multitasking apps to save your iPhone’s battery life is a terrible idea because A) Apple is giving developers proper tools to have their apps work efficiently in the background; and B) users should trust the operating system is effectively managing apps that aren’t active.

Today, Apple has confirmed that users should not force-quit apps frequently and has said that doing so won’t help extend the iPhone’s battery life at all.

Responding to an email inquiry from a concerned customer, Craig Federighi, Apple’s Senior Vice President of Software Engineering, has made it clear that it’s completely unnecessary to close every app in the app switcher frequently.

“Do you quit your iOS multitasking apps frequently and is this necessary for battery life?,” asks the email sent to Apple CEO Tim Cook, who forwarded it to Federighi. 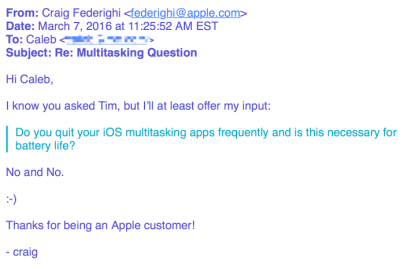 Federighi responded, “No and No.”

Force-quitting apps is not necessary because iOS takes care of managing system resources so that background tasks that don’t need to run do not waste resources.

In addition, force-quitting an app removes it from RAM so the next time you switch to it iOS has to reload the app from flash storage, which consumes energy, meaning force-quitting multitasking apps on a regular basis may actually worsen battery life.