Sticking to its tradition, Samsung today officially announced its next-generation Galaxy smartphones, the Galaxy S7 and Galaxy S7 Edge. An evolution of last year’s Galaxy S6, the new phones retain Samsung’s quad HD Super AMOLED display while fixing some of the annoyances of the Galaxy S6.

Notably, this includes IP68 water and dust-proofing and support for microSD cards via a hybrid SIM card tray to boost storage capacity up to 200GB (in some select countries, the tray can be used with a dual SIM card).

The battery is still non user-replaceable, but the cameras have been improved. Yes, the camera hump is still present on the back, albeit much less pronounced than on the S6. The overall look and feel of the new handsets hasn’t changed much from the Galaxy S6’s seductive metal-and-glass industrial design.

As you have probably guessed, both phones are running Android 6.0 Marshmallow with Samsung’s TouchWiz interface and are driven by Qualcomm’s 2.2GHz quad-core Snapdragon 820 processor with 4GB of RAM or, in some regions, by Samsung’s in-house built 2.4 Ghz oct-core Exynos chipset.

While the Galaxy S7 has the ultra-sharp 5.1-inch quad HD 2,560-by-1,440 pixel resolution screen at 575PPI just like its predecessor, the Galaxy S6, its Edge variant features a larger 5.5-inch screen at 534PPI. Still, the Galaxy S7 Edge is smaller than Apple’s 5.5-inch iPhone 6s Plus due to edge-to-edge display that’s curved on both sides.

Samsung is touting a new software feature, the Always-On Display, which permanently shows a clock with notifications, a calendar or an image on the device’s screen while consuming 0.5 percent of battery per hour, according to Samsung’s internal tests. As a nice touch, the Always-On Display shuts down itself when the phone is in your pocket, as determined by the built-in proximity sensor.

Game Launcher, a new add-on for gamers, lets you manage battery consumption and minimize notifications and gamers can also record or share their screen to play with others. Samsung has also delivered its own version of Apple’s Metal API: the new Vulcan API promises to make possible high-performance graphic games with lower battery consumption.

As for the enhanced cameras, a brighter f/1.7 aperture lets in 25 percent more light and the sensor’s aspect ratio has been changed from a wide 16:9 format to the 4:3 ratio. The cameras shoot 4K and have optical image stabilization. The company is also using a technology called BRITECELL, which is similar to Apple’s Focus Pixels, that it claims allows for a three times faster focus.

More importantly, Samsung has actually decreased pixel resolution from 16 megapixels in the last year’s models to twelve megapixels in favor of using larger pixels that let in 56 percent more light, which boosts image quality in low-light situations. As per Samsung, the Galaxy S7 captures 33 percent more light than the iPhone 6s Plus.

The new phones also feature support for wireless charging with fast charging technology and are outfitted with bigger batteries (which are not user-replaceable) that Samsung claims will help leave the battery woes of the Galaxy S6 generation in the past.

The phones continue to use micro-USB and don’t have a USB-C port, as was rumored.

And here are technical specifications for the new devices: 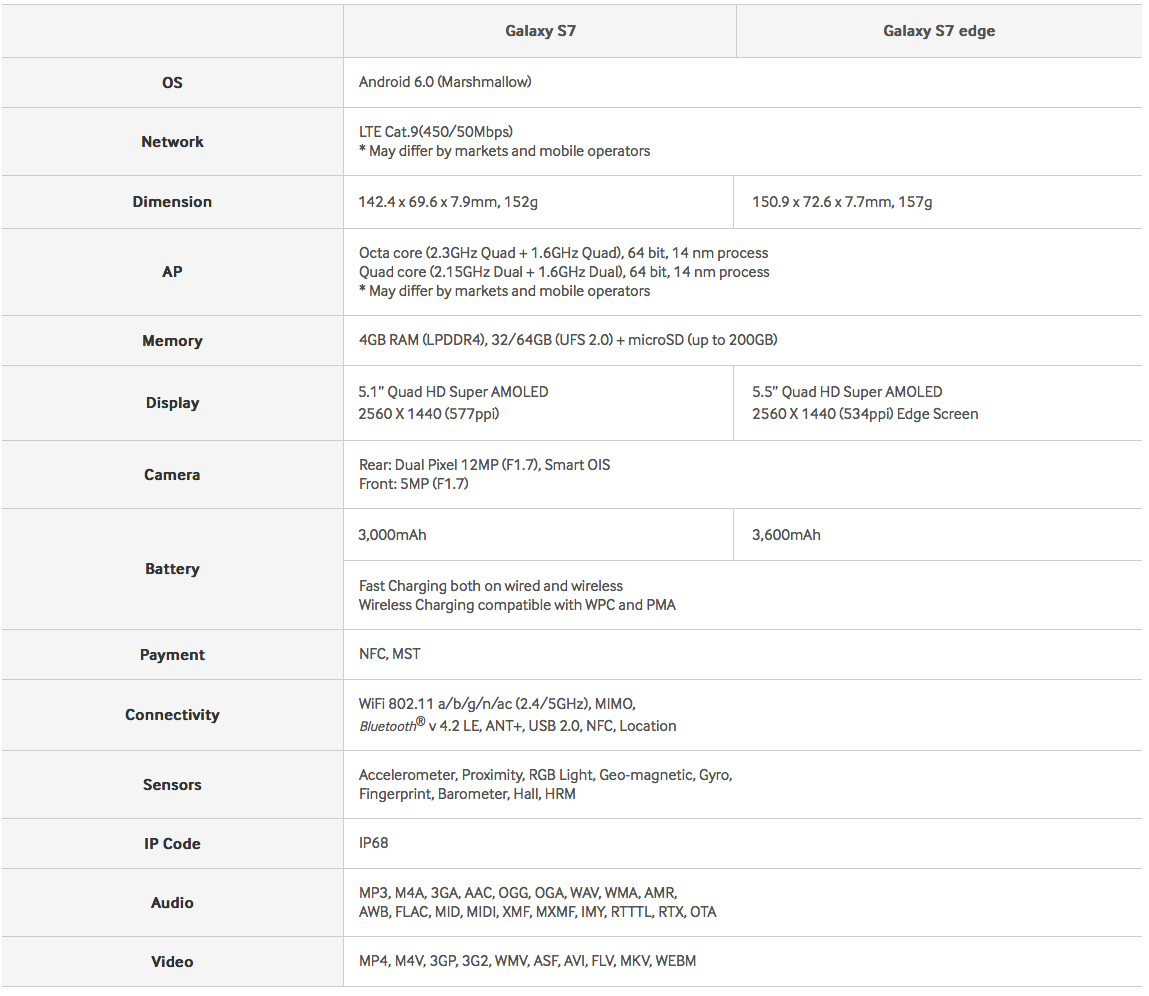 Samsung also announced the Gear 360, a 360-degree camera and Samsung Connect Auto, a connected car solution “designed to be the intelligent center of your car”. Three days ago, the company unveiled the new Gear S2 Classic smartwatch with support for 3G cellular data via the brand new eSIM standard.

The Galaxy S7 will come in Black or Gold variants. The Galaxy S7 Edge will be offered in Black, Gold and Silver colorways. Both phones will be available in 32GB and 64GB versions and will price-match last year’s flagship Galaxy handsets, Samsung has said.

The South Korean company will start to take pre-orders for the Galaxy S7 and Galaxy S7 Plus on February 23 ahead of the devices’ debut on all four major carriers in the United States starting on March 11.

Oh, and people who buy an S7 or S7 edge between February 23 and March 18 will be treated to a free Gear VR headset with a bundle of six games. For the time being, the Gear VR only works with the new Galaxy S7 phones and their predecessors.

What do you think of the new Galaxies?