In August of last year, Catalyst unveiled the first (to my knowledge) fully waterproof case for the Apple Watch. Where other cases merely provide drop protection or, at most, water resistance, the Catalyst Case is fully IP-68 spec waterproof for up to 5 meters.

Given Catalyst’s reputation for making well-designed products, I jumped at the chance to give their Apple Watch case a try. I’ve been using it every day on my own sport model Watch for the past several weeks, and I’m finally prepared to share my thoughts.

The case measures 53mm x  44.4mm x 13.5mm (or 2.1″ x 1.7″ x 0.5″), and it encompasses the entire body of your Apple Watch. Everything is covered except for the screen, which like similar waterproof iPhone cases is surrounded by an airtight bezel that keeps out moisture. This means the Digital Crown, the bottom of the Watch, and the speaker/microphone are all covered by various materials designed to keep them dry. Catalyst promises that none of this will affect the Apple Watch’s features, but that hasn’t exactly been my experience. More on that in a moment.

The case includes a 24mm premium silicon strap, and it snaps around your 42mm (worth noting there is no 38mm version at the moment) Apple Watch using a single screw. Once it’s in place, you can take your Watch with you underwater as deep as five meters, or roughly 16 1/2 feet—Catalyst clarifies on its website that the case is “suitable for rain, splashing, accidental submersion, showering, bathing, surface swimming and shallow snorkeling, but customers should avoid exposure to pressurized water.” The case also meets MIL-SPEC 810G for advanced drop protection.

The design of the Catalyst case is distinctively sporty. It looks great with activewear, but most folks are going to want to remove it before going out in business casual or formal attire. Since the case is covered in plastics, it’s just not going to go with cashmere and cufflinks. To be fair, though, my review unit was gray with black straps and a bright red Digital Crown cover, and I imagine the all-black model would do a much better job of blending in. 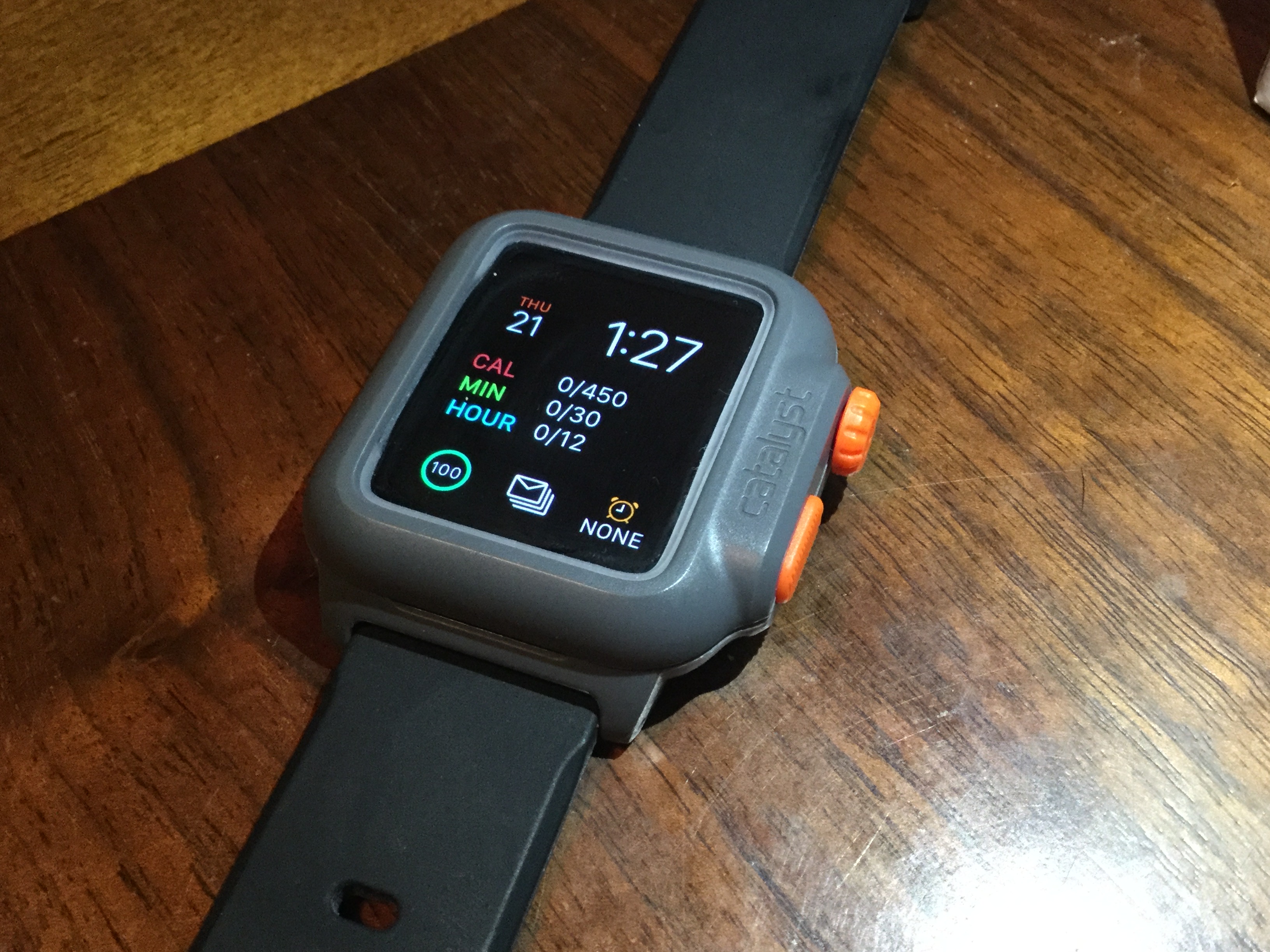 Of course, this case was clearly built with places like the gym and the outdoors in mind, and in those settings it looks right at home. It reminds me of a Casio G-Shock, or an old Adidas sports watch I used to have, and it’s extremely comfortable to wear while doing things like running and lifting weights.

Catalyst did a really good job here. To install the case, you just remove your current straps from your Apple Watch, slip the included silicon cover over the Watch’s body, and snap the two large pieces around it. It took me a few minutes the first time, to make sure everything was lined up, but once it’s all in place, all that’s left to do is tighten a single screw. 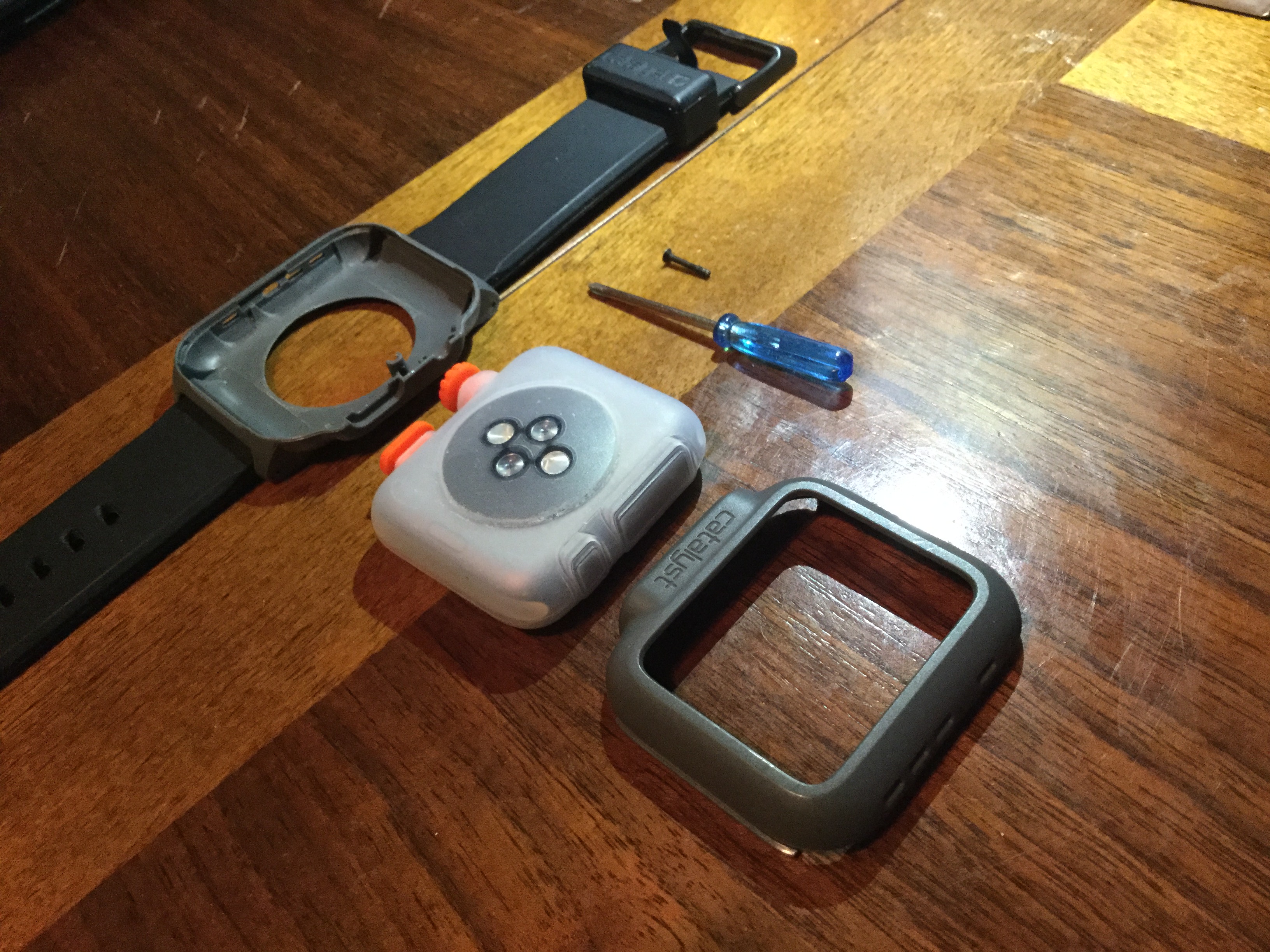 This is miles better than the 4-screw process of the LUNATIK EPIK I reviewed late last year, and removing the case is even easier. Just pull out the screw using the included tool, place your thumbs on the heart rate sensors and push up; the case quickly snaps apart. Then you pull off the silicon cover, reinstall whatever Watch band you want to use next, and you’re good to go. At this point, I’ve gotten good enough that I could probably put the case on and take it off in under a minute. This is a bigger deal than you’d think, given that most folks aren’t going to want to use this thing all the time.

So how does the Catalyst case hold up in the real world? It’s solid. I’ve worn it virtually every day for the past several weeks, and not once did I question its integrity or comfortability. It’s survived hundreds of inadvertent knocks and bumps, as well as a number of encounters with my 100-pound lab. I’ve worn it during workouts, while running on the treadmill, and of course in the shower—I even took it for a few dips in the hot tub. Not only has it survived all of this with few noticeable scrapes or scratches, but there are no signs that liquid or debris ever made it past the case. Two thumbs way up.

Of course, as with most products, this one has a few issues worth mentioning. Perhaps the biggest one is the plastic Digital Crown cover. For me, the cover makes using the DC noticeably more tedious. There’s just something a bit off in the torque or tension, and it makes it feel like you’re turning the dial 2-3 times more than you normally have to. I found this to be mildly annoying, but I rarely use the Digital Crown. I imagine folks who do use it will find this more frustrating. 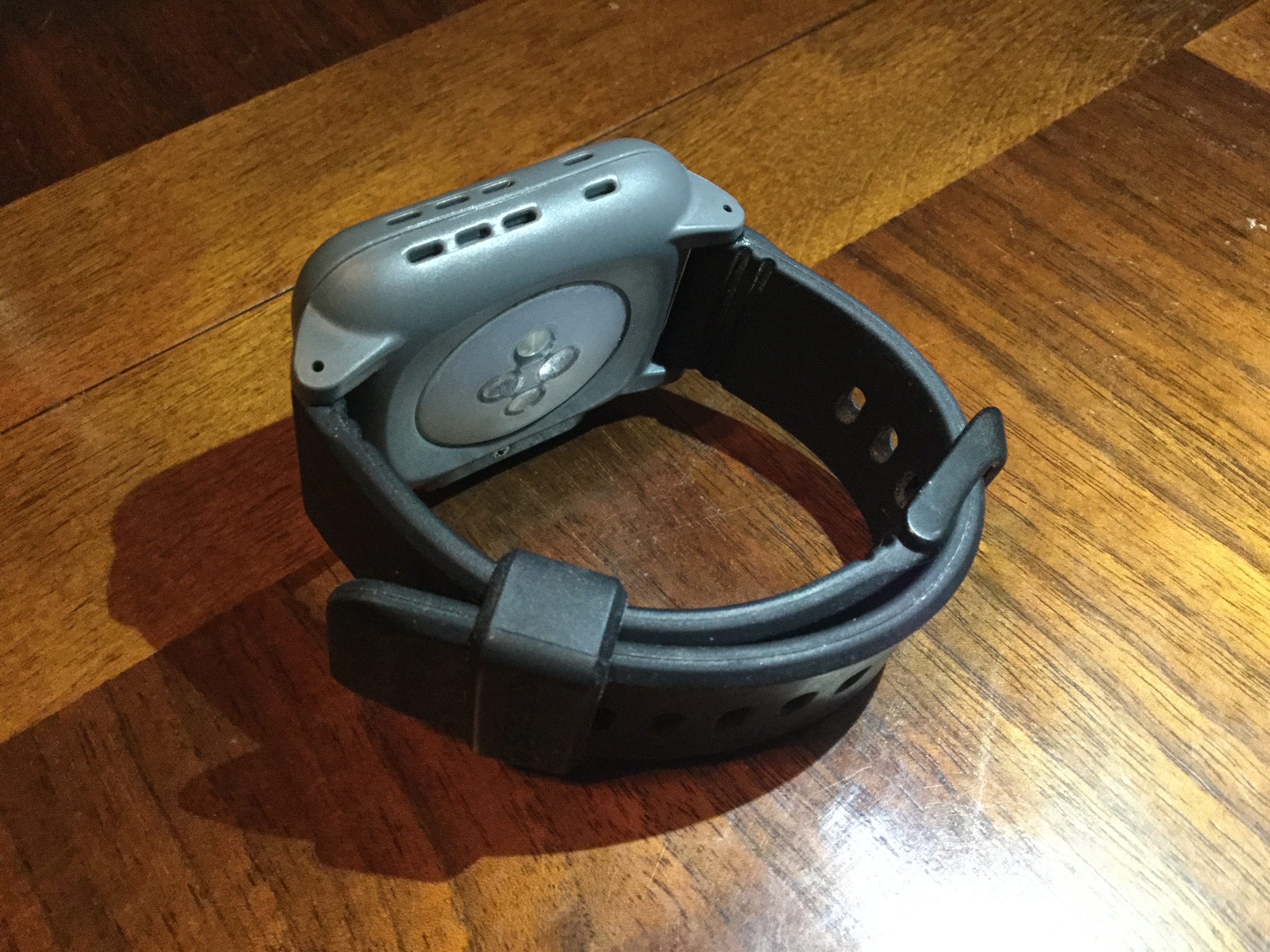 Another problem I’ve noticed has to do with the plastic covering on the heart rate sensors. It’s like a thin membrane of sorts—the same stuff you see over Touch ID on waterproof iPhone cases—and it seems that it sometimes interferes with wireless charging. There’s been multiple occasions over the past few weeks where I’ve set my Watch on the charger overnight, only to return to a completely dead battery. It’s definitely not poor positioning—it’s pretty clear when the magnet catches—and it’s happened on multiple chargers (Apple and third party), so I feel like the case is the likely culprit.

I know these complaints sound grave, but the reality is I haven’t encountered these issues nearly enough for me to consider them serious problems. Besides, I didn’t run into any other snags when using the rest of my Apple Watch features. The side button is easy to press in, and there has been no noticeable change in my call/audio quality or heartbeat readings. And obviously the screen still works perfectly because, well, it’s not covered.

As you’ve probably figured out by now, I’m a fan of this product. I think it’s a great-looking accessory (in the appropriate settings) that fulfills its promise of protecting your Apple Watch from water, dirt and other debris. If you’re even considering a case in this category, I highly recommend giving the Catalyst a hard look.

The Catalyst Case comes in three colorways: Stealth Black, Rescue Ranger and Green Pop, and you can find them all here for $59.99. Included in the box are the case and band, instructions, a mini screwdriver, spare screws and an extra side button.