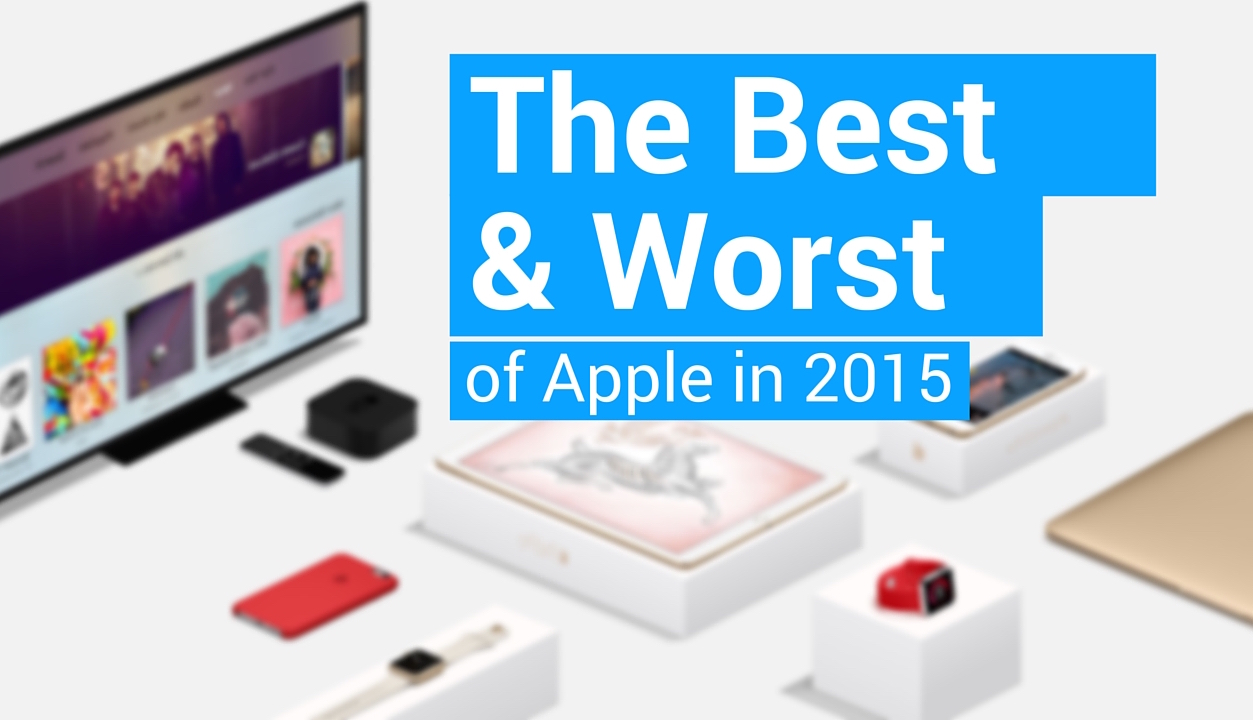 This has been a busy year for Apple from a product release standpoint. The company launched the Apple Watch in April, the first entry in a new product category for CEO Tim Cook. Then it released a new MacBook, a new iPhone, a whole new Apple TV, and the iPad Pro. And of course there was Apple Music, iOS 9 and OS X El Capitan. Busy year indeed!

As 2015 draws to an end, the iDB team takes a look back at the last twelve months. From software to hardware, to services, each Editor shares what he/she feels is the best and worst of Apple this year.

At long last, the Apple TV runs third-party apps and games. The hardware is surely impressive in and of itself, but it’s the App Store that matters most. Not unlike the App Store’s debut in the summer of 2008 which let us personalize our iPhone with apps, no longer does the Apple TV confine your experience to stock apps. Apps like Infuse turn it into a home theater center and games like Asphalt 8 make it a powerful console for casual gaming. But these apps are just scratching the surface of what’s possible so the key takeaway here is: the Apple TV is now an expansive platform which Apple has big plans for. Whatever your quibble with the Apple TV might be, you can count there’ll be an app for that.

The fourth generation Apple TV is an obvious choice for Apple’s best effort in 2015. It improves upon the company’s previous set-top box in nearly every way, and adds a number of new features such as universal voice search, a new touchpad remote, and a native app store loaded with apps and games. Starting at $150, this is easily the best bang-for-your-buck you’ll find in Apple’s lineup right now.

Finally getting 2GB of RAM in the iPhone was the best move that Apple made in 2015. Lack of RAM has always been a noticeable bottleneck for the iPhone, and for the first time ever, it’s no longer a major issue. Having more RAM means less Safari tab refreshing and overall improved app performance. The iPhone 6s is tops, and a lot of that has to do with finally having enough RAM.

The best thing that Apple did in 2015 was release Apple TV 4. I’ve been waiting for years for the company to follow through with the television experience that was talked about so much. While it isn’t a full TV set, Apple TV 4 has opened a lot of new options for me. I love playing games like Oceanhorn using my MFi controller and looking at awesome photos on 500px. My favorite feature? Streaming Apple music on my big screen hooked up to my vintage Pioneer speakers.

I’ll be the first to admit that Apple Music is a convoluted and messy app with a complex UI, but once I got passed that, it became clear Apple Music was the product that changed my life the most in 2015. A long time music lover, I had lost interest in new music or just listening to anything new, but Apple Music changed that. It renewed my passion for discovering new music, and helped me discover a bunch of new bands, several of them I ended up seeing live. The fact that it’s integrated with iPhone, Apple Watch, and Apple TV makes it an even easier option, because it just works with all my devices. It definitely has room for improvement, but to me, having most music in the world at my fingertips makes Apple Music the most radical product from Apple this year.

Out of all that Apple has done this year, one of the best steps forward to me has been the workhorse multitasking features introduced in iOS 9, particularly for the iPad Pro. Slide Over and Split Screen have changed the way I use my iPad Air 2, and these new interactions are only enhanced by the larger 12.9-screen of the iPad Pro. With iOS 9, Apple brought a new level of productivity and content creation to iOS and the iPad Pro, altering the direction of app design and the types of new apps being developed. The entire ideology behind iPad apps has taken a turn for the better, and I only see it getting better from here.

Apple spearheaded the digital music revolution so it goes without saying that I had high hopes for its subscription-music play. Don’t get me wrong, Apple Music is great, especially Beats 1 radio, and I use it all the time. But the sheer number of problems that are more complex than simple teething issues have me losing my faith. Apple’s sloppy execution coupled with Apple Music’s convoluted, complicated and illogical user interface leaves a lot to be desired. For a company that prides itself with simplicity, this is hugely disappointing. Worryingly, it indicates that software quality control continues to slip rather than improve within the walls of 1 Infinite Loop, Cupertino.

Picking the Apple Watch as Apple’s worst moment of 2015 was a no-brainer for me. You couldn’t find one in-store for some 3 months after launch, and it took 6 months for the wearable to properly support third-party apps. It’s the sloppiest I’ve seen Apple in recent years, and that’s not counting all the hardware and software issues. Here’s hoping we see a significant improvement with Apple Watch 2 next year.

The worst thing Apple did this year was let Jimmy Iovine talk to CBS This Morning about the new Apple Music advertising campaign starring Mary J. Blige, Kerry Washington, and Taraji P. Henson. He basically took what was already a fairly stereotyping commercial (though, arguably identifiable) and turned it into a “mansplaination” for how to find music. Let me remind you of what he said: ” So I always knew that women find it very difficult at times – some women – to find music, and [Apple Music] helps make it easier with playlists, curated by real people.” Oh, he also said this: “Girls are sitting around talking about boys – or complaining about boys. They need music for that, right? It’s hard to find the right music.” Thanks Jimmy. I couldn’t have figured out how to discover music without your giant man brain.

To me, the worst of Apple in 2015 was Apple itself. The company mostly praised for its tasteful design, product integration, and simplicity, has failed on many levels this past year. From questionable design decisions (Smart Battery Case, Apple TV Siri Remote), to untimely releases (Apple TV Remote app), to the mess that are the Apple Watch and Apple Music user interfaces, a lack of real care became more apparent. Apple seemed more worried about quickly pushing products out the door (Apple Watch and Apple TV) rather than fine-tuning these products to make sure they are indeed ready for prime time (watchOS still is disappointing software despite reaching 2.0 status in less than 6 months). Of course, Apple has good reasons for doing what it does, and we could sit here all day making excuses for the company (ie. limited amount of resources available), but I think Apple tried to do too much in order to prove it still has what it takes to be an innovative company. I’d go as far as saying it spread itself too thin.

Apple’s biggest misstep this year is probably the user interface of Apple Watch. While I own a Stainless Steel Apple Watch and a number of bands, and although I thoroughly enjoy wearing my Watch daily and consider it well ahead of the competition, I wouldn’t describe the internal hardware and software as a good attempt at Apple’s first foray into wearables. The hardware could be much snappier, and the software could just work better overall. While Apple Watch is a great device, it needs work in multiple areas, with the overall UX lacking in terms of speed and efficiency. With solid design and optimization improvements in the software and more robust hardware packed into the device, Apple Watch can push even further ahead of its competitors in the wearable sector.

What about you? What do you feel was the best and worst of Apple in 2015? Make sure to share your opinion below.