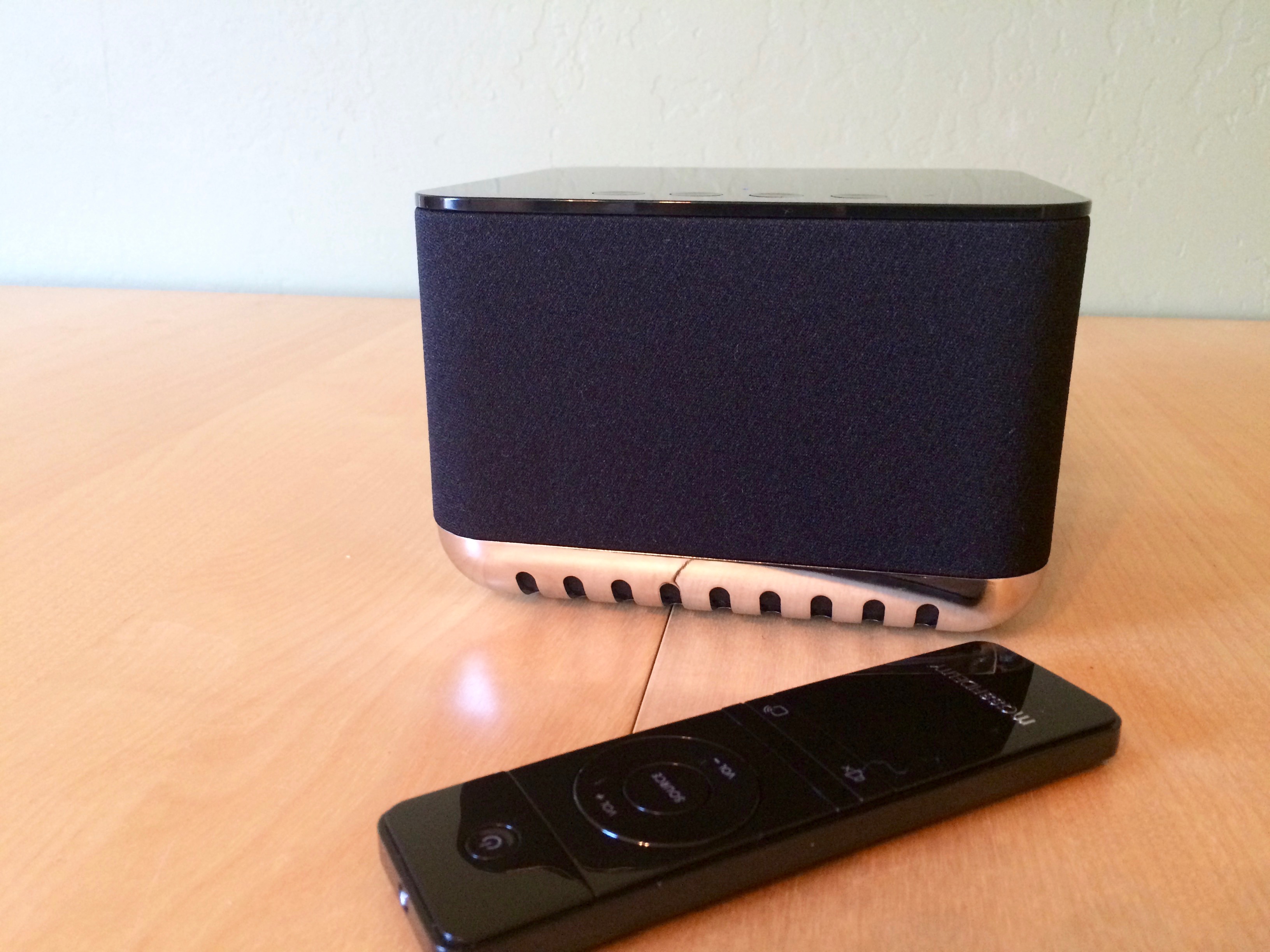 I love connecting my iPhone to my little portable speakers so I can bring my music to any party. The technology is great, and the convenience is awesome. But, oftentimes, the sound quality suffers. There are a handful of portable wireless speakers that perform exceptionally well, but none of them provide that true stereo sound that I’m looking for.

So, when I heard about Mass Fidelity’s claim that the Core portable wireless speaker simulates stereo quality sound I thought, “yeah right.” The company sent us two Core speakers to test out (for the purpose of multi-room use). Frankly, my opinion has changed. We’ve got a hands-on review of the Core by Mass Fidelity for your reading pleasure today. 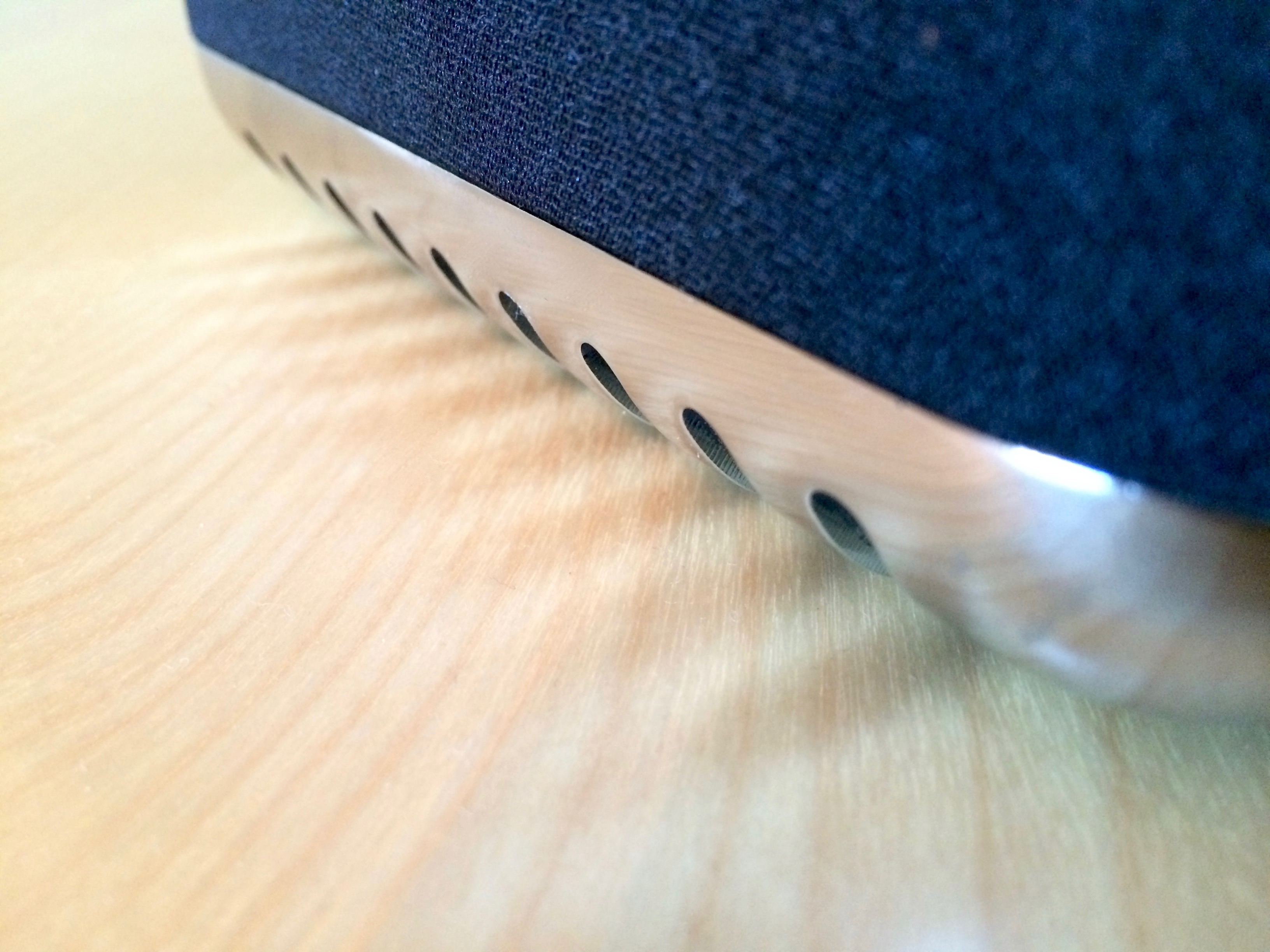 The Core is a small black cube that measures five inches wide and deep, and four inches tall. The base of the cube is a stainless steel grate, which protects the down-firing subwoofer underneath. A strip of soft mesh material covers the entire middle portion, which is protecting the five speaker drivers that blast out the sound to the left, right, and front areas.

The top of the Core provides speaker-to-speaker connection and NFC hookup. There are also volume control buttons, but no pause/play or track skipping feature.

The backside of the Core houses the various audio connection ports. There is a sub-woofer output jack, a 3.5mm auxiliary input port for connecting wired devices, a control input port for home automation, an optical input port so you can directly connect your set-top box (like Apple TV), a USB port that doubles as a charger if your iPhone starts to lose juice while you are playing music, and the power connection port for recharging the battery. Incidentally, you can play music through the speaker while it is charging.

The Core comes with a remote control that allows you to mute the sound, connect multiple units together, and adjust the volume. You can also turn the speaker off and on with it. 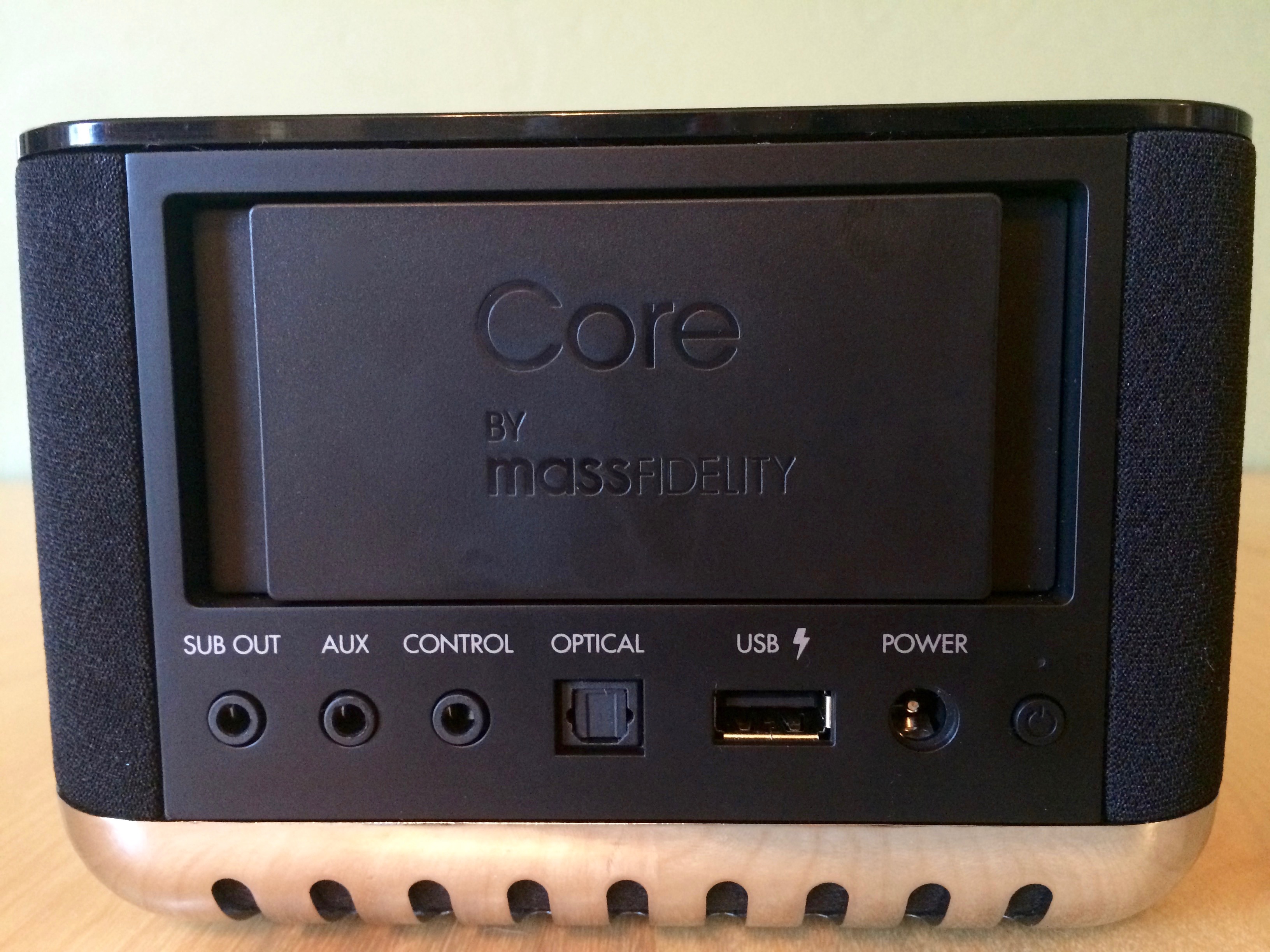 Setup is typical of the average Bluetooth-enabled speaker. Power up the device and connect it when the indicator light on top flashes blue. I did not test the NFC connector.

Setting up multi-room speaker use is a bit more complicated, but once you understand the process, it is easier. The key is not to pair the second speaker with your iPhone (or other audio device). Only pair the one you want to control music with. The second (and third, and fourth) will instead pair with the original.

After pairing the main Core, press the Multi-Room button on the top of it. Then, press the Source button on the top of the additional Core units. You may have to press the Source button more than once to get it to the right connection. When the light turns purple, it is in the right spot. Then, the speakers are connected with each other and you can place them throughout the house, wherever you like. 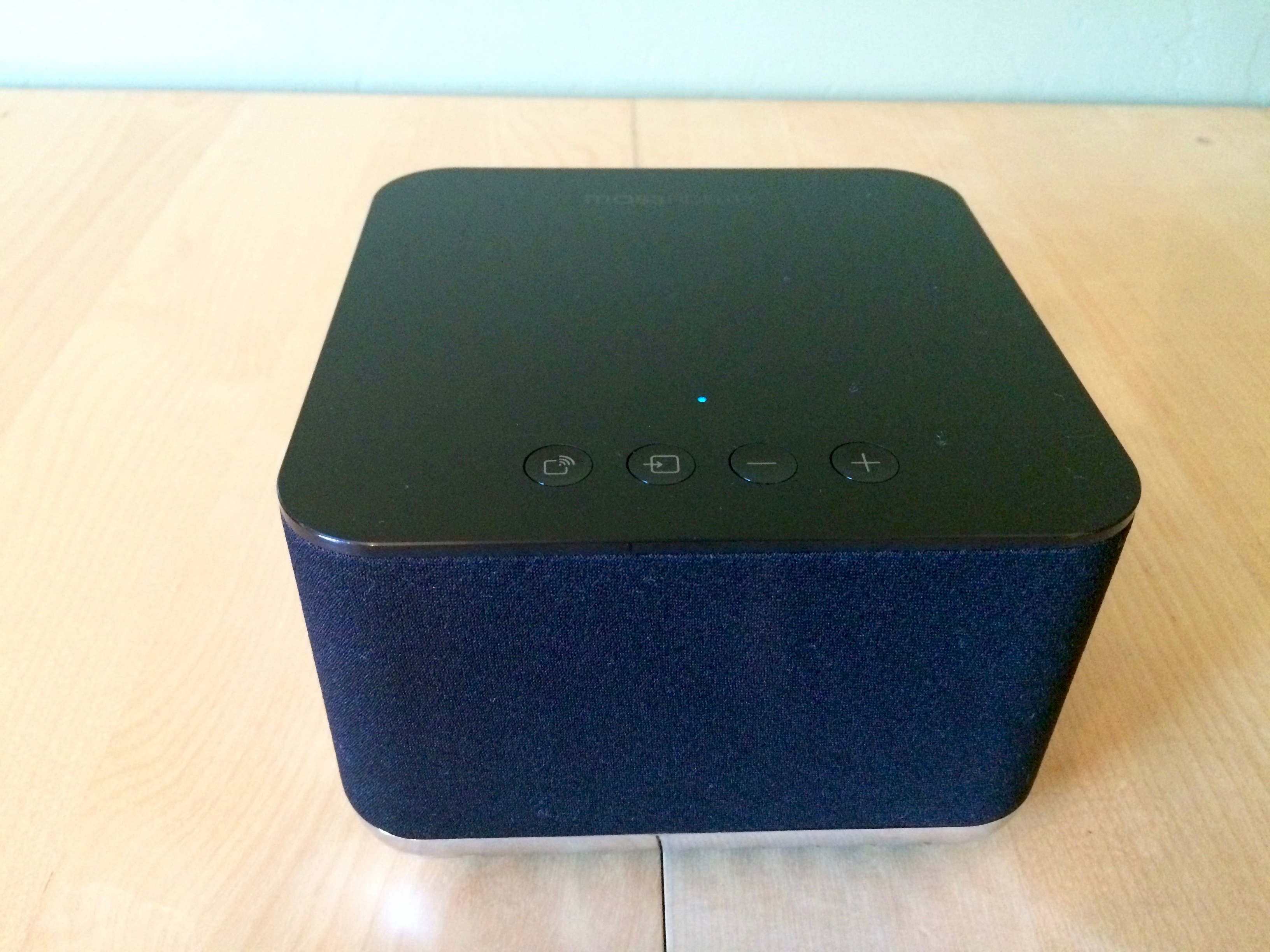 The marketing catch phrase with this speaker is that it has “Acoustic Holography” which sounds like jargon. So, I asked the company’s founder Ben Webster to explain the technology in terms that the average person could understand.

He told me there are a bunch of signal processors with carefully timed inputs on each one of the five speakers, which essentially recognizes where in space the wave frequencies will arrive and sort of reflects them back so that our ears hear them as stereo sound.

Basically, if you place the Core with the correct setup, you could walk around any place in the entire room and it will always sound like the music has the same clarity and volume.

From my personal experience, you could even walk into a different room.

I’m not exaggerating. I set up the Core based on Webster’s recommendation, which was equidistant from two side walls, and with the back about two feet from a third wall, which creates a healthy low-end. I also adjusted the volume to what Webster calls “the sweet spot,” which is five steps below full volume.

I walked from the dining room, where the Core was, into my living room, which has a wide opening, but is separated by a portion of a wall. The sound was crisp and clear and the difference in volume level was almost indistinguishable.

It’s as if the sound is the same, no matter where you are or how far away you are.

It really does provide a two-speaker stereo simulation in a single-speaker component.

It has better widespread resonance and clarity than the UE Boom (as well as two UE Booms chained together) and a richer quality of sound than the JBL Xtreme I compared it to. I also gave it a go against a friend’s Bose SoundDock and found that it had a fuller depth of sound and was able to capture the high-end quality much better.

With two speakers connected, you can pipe music throughout the entire house. I set one speaker up in my living room at the front of the house and the second in the kitchen at the back of the house and I could hear the music clearly throughout every room. The bathroom, which was separated from the speaker by three walls was a little quieter, but still very clear and crisp.

One Core speaker fills a room wonderfully, and even sounds great when heard from different rooms. More than one Core is simply a nice bonus for multi-room playback. You can actually daisy chain up to nine of them, if you so choose. 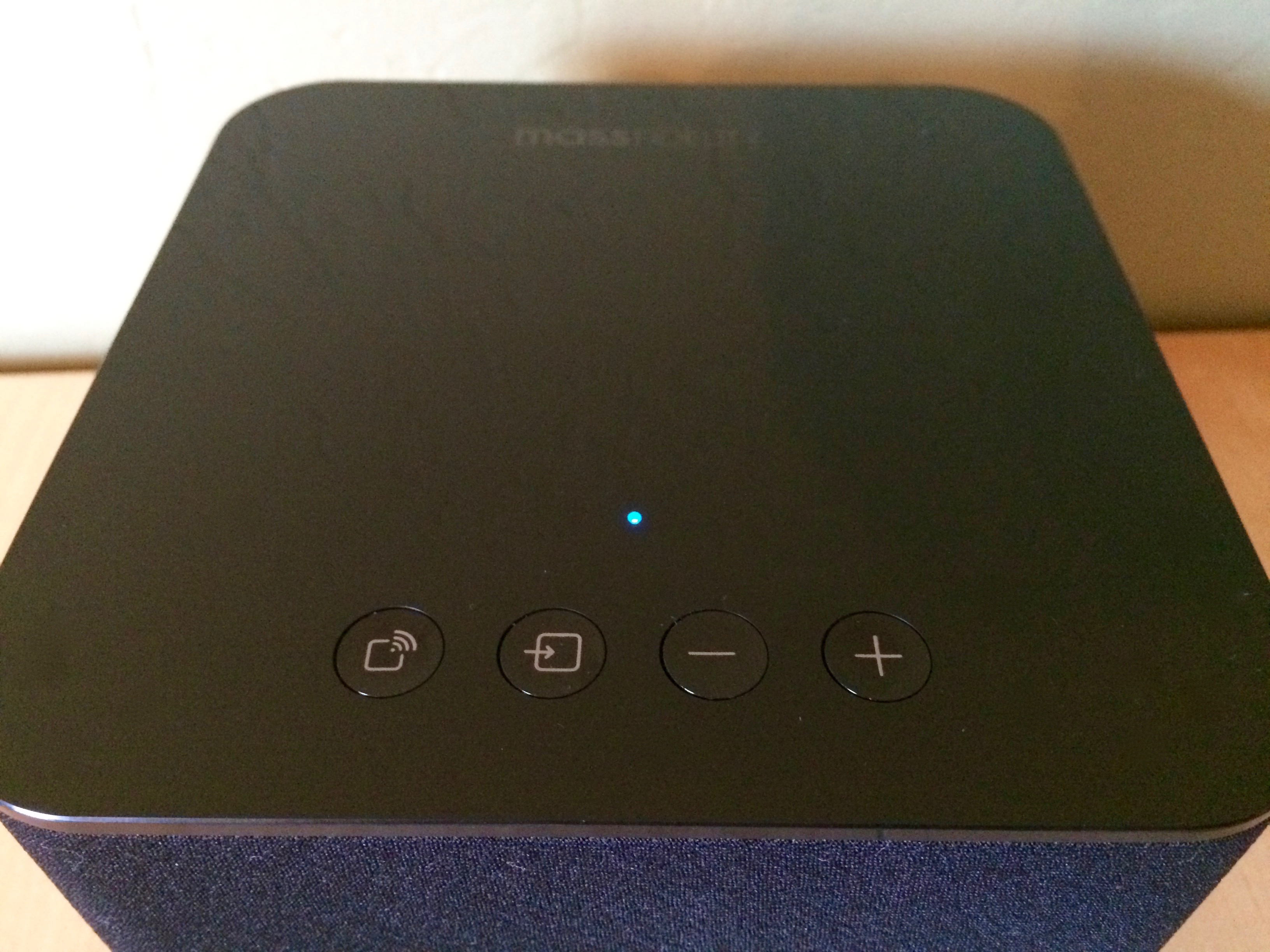 As I noted above in my comparison against other speakers in the same category, this six-inch cube has a big sound with rich highs and lows. It is very impressive for a speaker of its size.

The simulated stereo sound is legit. You can stand anywhere in the room and hear the clarity and volume exactly the same. It’s almost eerie how well it works.

I had a few issues with connectivity. Sometimes, the speaker would simply disconnect from my iPhone and I’d have to reconnect it. If I paused a track for too long, sometimes that would also cause the Core to disconnect (not shut off, but disconnect). When I had two Core units connected, the secondary unit would simply stop playing every once in a while, as if it disconnected from the base unit. 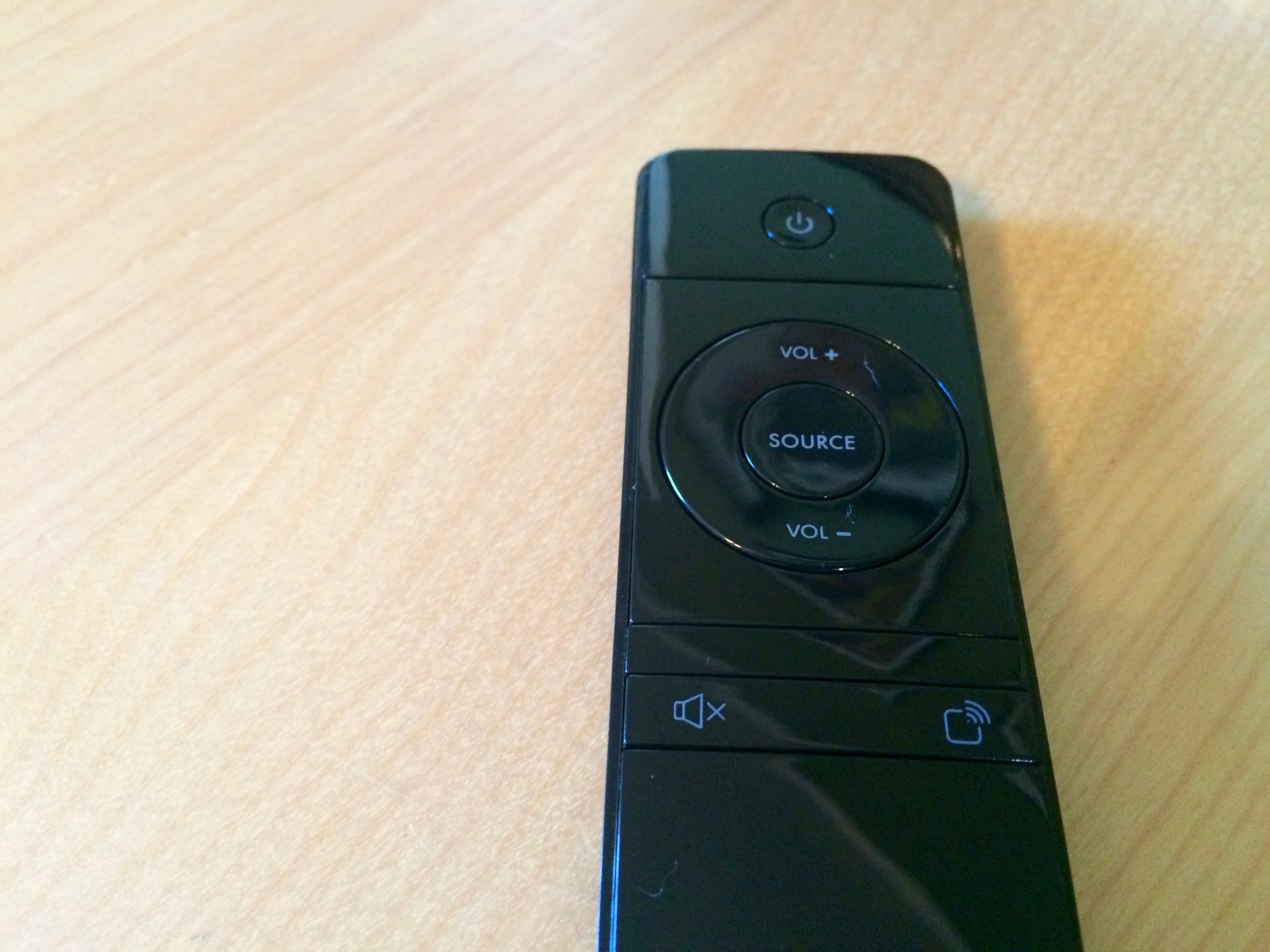 The Core costs $599. The price is the sticking point with this portable speaker unit. It isn’t for everyone, although everyone would enjoy the benefit of its sound quality. This speaker is definitely geared toward audiophiles. It is about as close as you can get to a stereo sound setup in a single-unit portable Bluetooth speaker. Discerning ears will know that it is worth the money.

The Core fits into the upper echelons of high quality Bluetooth portable speakers. The way the sound fills a room is amazing for a device of its size. If you are thinking of investing in a top-of-the-line portable speaker unit, and are willing to pay extra for superb sound quality, the Core is for you.