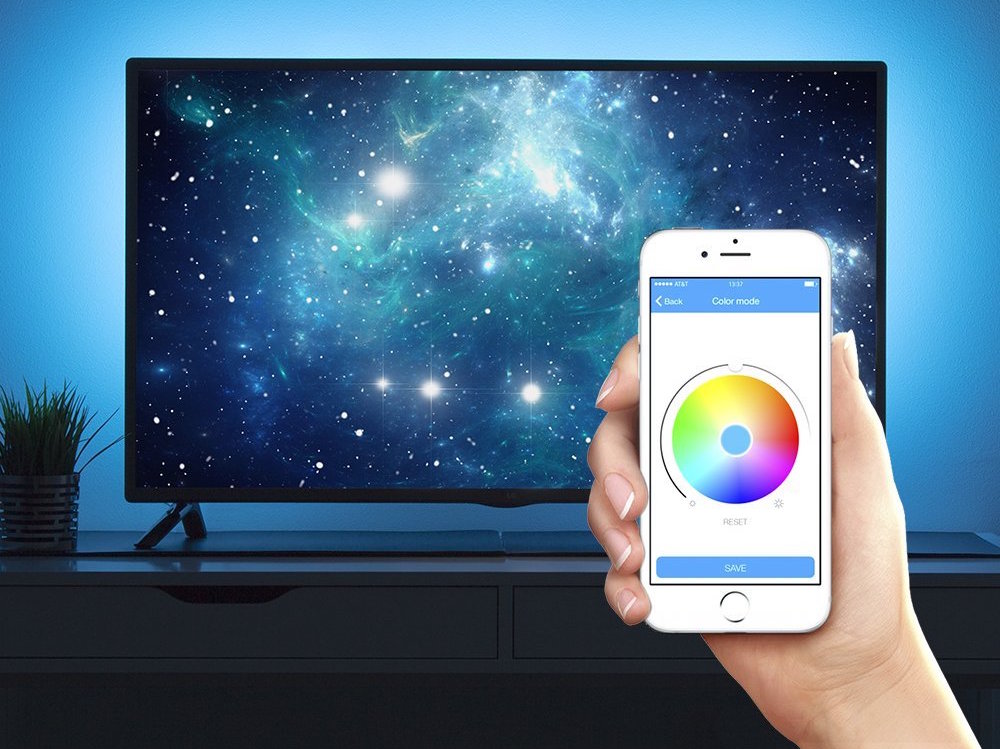 I’ve been playing with a cool smart lighting accessory over the past few weeks called the LED IQ Strip by Satechi. It’s a roughly 5-foot strand of multicolor LED lights that can be remotely controlled by virtually any Bluetooth 4.0 device. 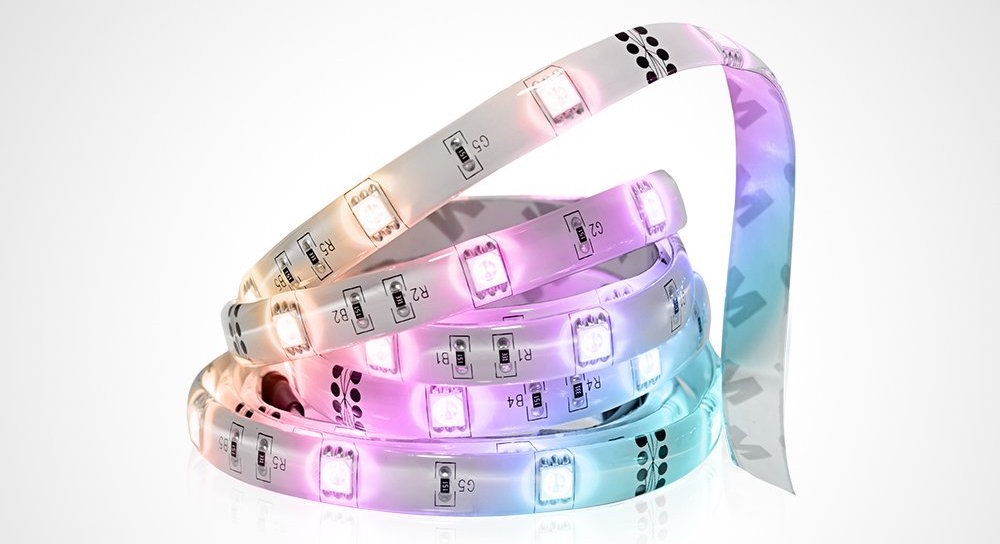 Installing the IQ Strip is extremely simple. Just unwind the strand of lights, remove the paper backing to expose the 3M tape, and adhere the Strip to your desired surface. I chose to hang mine on the back of my TV set, so that it casts a glow akin to Philips’ Ambilight sets.

Syncing is even easier. Just make sure Bluetooth is enabled on your phone or tablet, download the companion app and open it. There is no searching or security codes to deal with; the two devices see each other within seconds.

Functionality-wise, the app is great. You can use it turn up to 10 different IQ Strips off and on, customize your lighting using a palette of over 16 million colors and various levels of brightness, and setup timers and schedules. You can also program scenes, set the Strips to turn off and on based on your proximity, set the lights to blink to alert you of missed phone calls, and there’s even a Disco mode, which makes the lights blink to the beat of music (using your smartphone’s microphone). That’s quite a feature set for a product that costs less than half of its competitors. 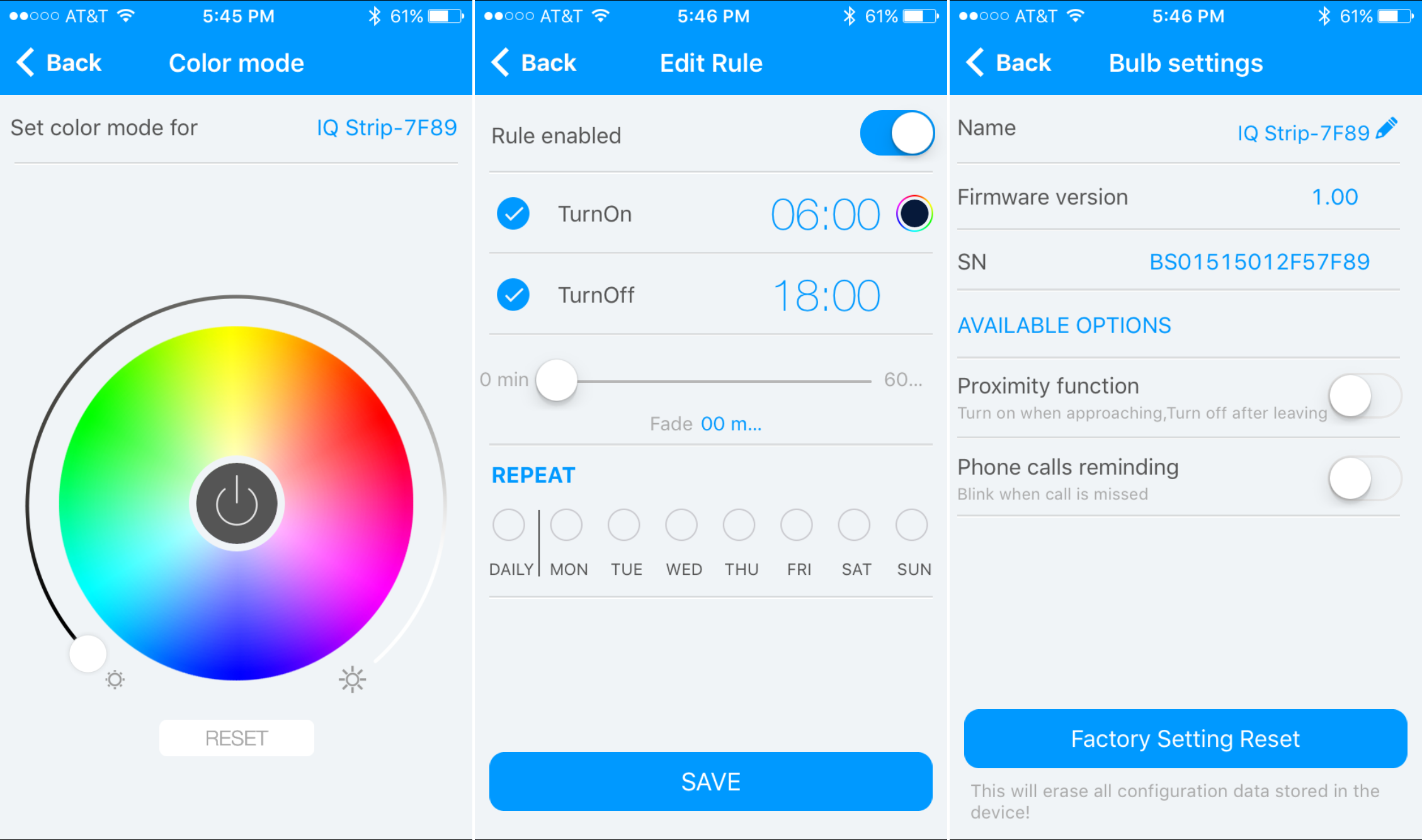 There are, of course, some tradeoffs for the lower price though. For starters the companion app, which again is very functional, is terribly designed. Everything from the icon to the UI is off-putting, and definitely gives off a “generic” or “budget” vibe. I’d also like to see a few more features added, such as custom patterns and various other customizable smartphone alerts—i.e. have the Strip flash blue when my iPhone receives a Twitter notification, etc.

Finally, it’s worth noting that my IQ Strip can get rather warm from time-to-time. I thought it may just be my unit at first, but went on to read that other users are seeing the same thing. It’s not like scalding or anything, but it’s enough to convince you to set up timers or at least ensure that the Strip doesn’t get left on for long periods of time.

Since this isn’t a lightbulb or other 1:1 appliance replacement, I’m not sure who I’d recommend the IQ Strip to. Sure it was fun to play around with, and made for a great conversation piece at get-togethers (making my TV glow blue during Cowboys games was particularly crowd-pleasing), but half the time I forgot it was even back there.

That said, it would seem like this is the perfect time of year for something like this. You can hang a Strip as part of your holiday decorations, or give one away as a gift. Either way if you’re interested, you can find the Satechi LED IQ Strip on Amazon for $39.99.