A sneaking suspicion that Apple could be taking advantage of the App Store’s charts to promote its own apps at the expense of others has received a prominent, though inconclusive, confirmation in today’s TechCrunch report.

The publication noticed that multiple Apple apps such as Pages, Keynote and Numbers are being listed on the App Store’s Top Free charts on some iOS 9.1 devices in higher positions than they would normally rank.

These same apps are ranked differently in the App Store within desktop iTunes and on other iOS devices. So, what’s going on here?

“When viewed on an iPhone, these apps are showing up intermingled in the Top 20 Free applications on the iPhone, but when viewed from the desktop version of the App Store, they’re either not present at all within the Top 20, or in different positions,” writes TechCrunch’s Sarah Perez.

In addition to Pages, Keynote and Numbers, other Apple apps like iMovie are being given a boost as well. Our own checks have not confirmed the issue as we were unable to replicate the errant chart behavior on our devices.

As a proof, TechCrunch posted the following screenshots of the Top Free charts on an iPhone 5s and iPhone 6s, both running iOS 9.1, that at least indicate that these listings do vary from one device to another. 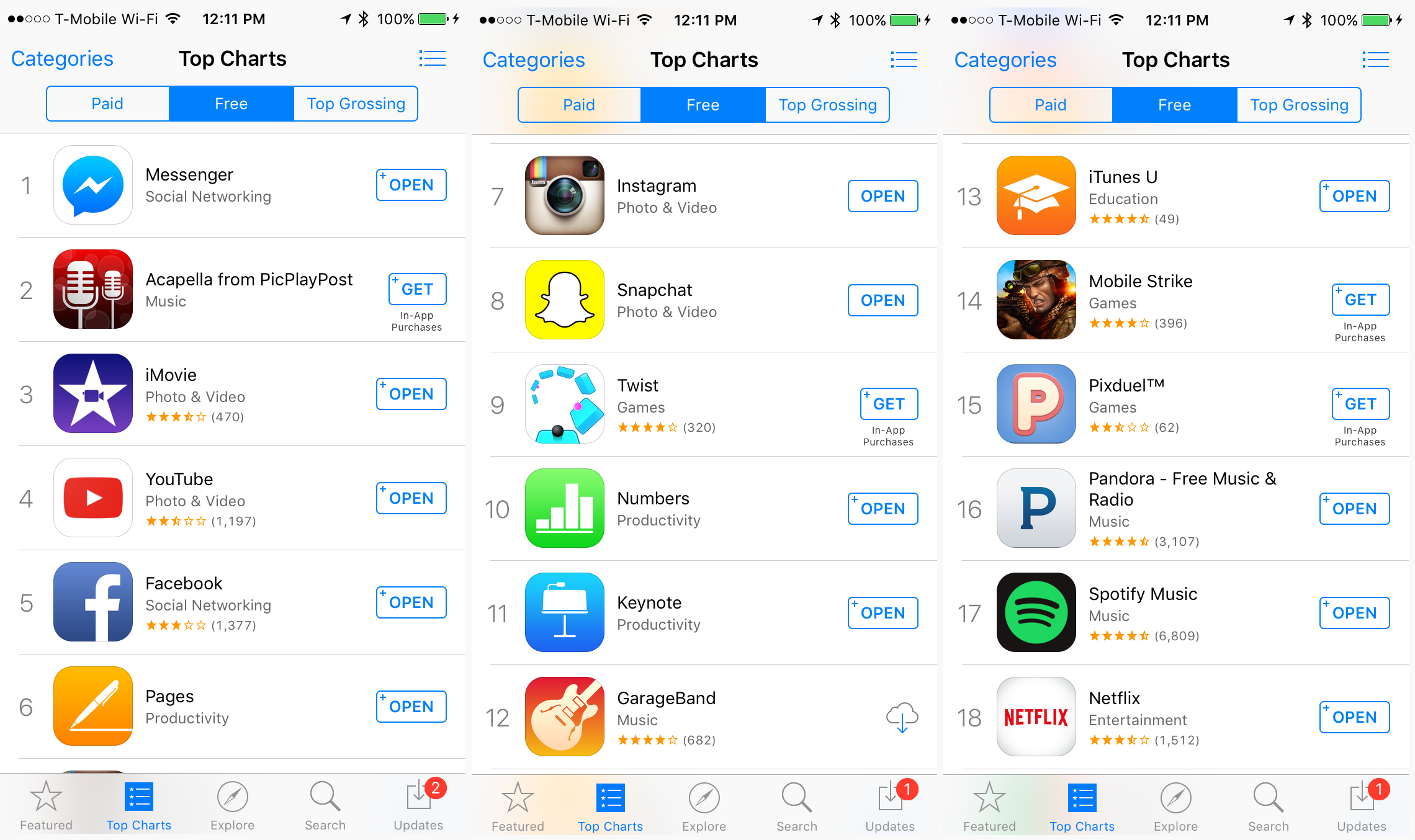 For what it’s worth, devices with iOS 8.3 don’t seem to be affected by this.

“The discrepancy, of course, could be related to a bug in Apple’s App Store ranking algorithm, but it’s a persistent one if that’s the case,” reads the carefully worded article which implies that this might be an intentional manipulation on Apple’s part.

The discovery was confirmed by the app store optimization firm Sensor Tower. MacRumors confirmed that iMovie, Keynote, Pages and Numbers are indeed all listed within the top 10 free apps in the App Store on some iOS devices, including the iPad mini 2 and iPhone 5s.

“On an iPhone 6 Plus, iPhone 6s Plus, iPad Air 2 and iPad Pro, the only Apple app in the top 20 free apps is iTunes U, which also matches up with the desktop version of the App Store,” notes MacRumors.

As per TechCrunch, non-Apple apps show consistent rankings across devices and App Stores. For instance, Facebook Messenger is still listed at the top of the App Store, followed by other popular free apps such as Google’s YouTube and Facebook’s main mobile client.

“If the current ranking manipulation is being done manually, it would make sense that it would be device specific—users with new iPhones like the 6s or 6s Plus might be prompted to install Apple’s apps as they turn to the App Store’s Top Charts to fill up their new phone with applications,” reads the article.

Another factor potentially adding to the confusion: Pages, Keynote, Numbers and iMovie are available at no charge with every iOS device purchase so Apple lists them in the Top Free charts, but owners of older iOS hardware must still buy them.

And last but certainly not least, Apple used to adjust App Store results to recommend its own apps, “so it could be the result of a direct work to promote its line of iWork apps to specific devices or specific users,” as opined by MacRumors’ Juli Clover.

Trouble in the App Store or much ado about nothing?

On the other hand, charts might have been updated to reflect the device you’re using, as evidenced by Pages which is ranked at the top on the iPad but tenth on the iPhone. Or, the snafu may have something to do with the App Store’s new sorting algorithm.

At any rate, if Apple is found guilty of purposefully manipulating the App Store’s chart, the company could potentially face lawsuits in some countries. In the European Union, for instance, regulators brought a lawsuit against Google over favoring its own web properties in search rankings.

Are you seeing these inconsistent rankings on your iOS device as well? If so, we’d like to hear your interpretation of the issue in the comments below.