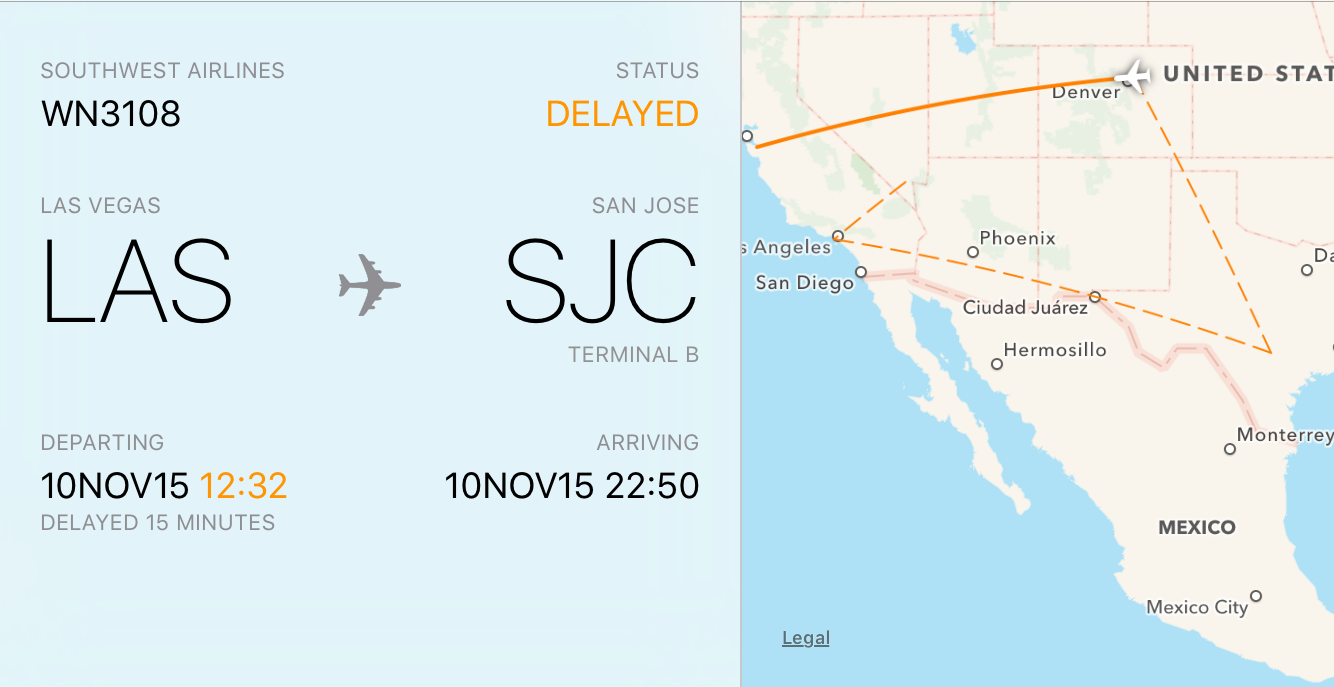 Owners of an iPhone, iPod touch, iPad, or Mac can quickly look up flight status information found in Notes, Messages, and Mail using a rich interface with flight trajectory, flight status, arrival times and other information.

In this tutorial, you’ll learn how to quickly preview the current status and other information pertaining to an airline and flight number, with or without leaving the context of what you’re currently doing.

Before we begin, it’s important to remember that iOS’s data detectors only support previewing flight information from Mail (messages containing itineraries from airlines), Messages and Notes.

In addition, this feature only works with the most recent flights. For the purposes of this tutorial, I’m going going to demonstrate previewing flight information in Notes.

How to preview flight information on iPhone, iPod touch, and iPad

Step 1: Launch Mail, Messages, or Notes on your iPhone, iPod touch or iPad.

Step 2: You can now create a few sample items by typing the airline and flight number into a note, with or without the number sign. For example, both “United Airlines UA531” and “United Airlines #UA531” should work fine.

Step 3: Now tap one of the links to bring up a contextual menu. 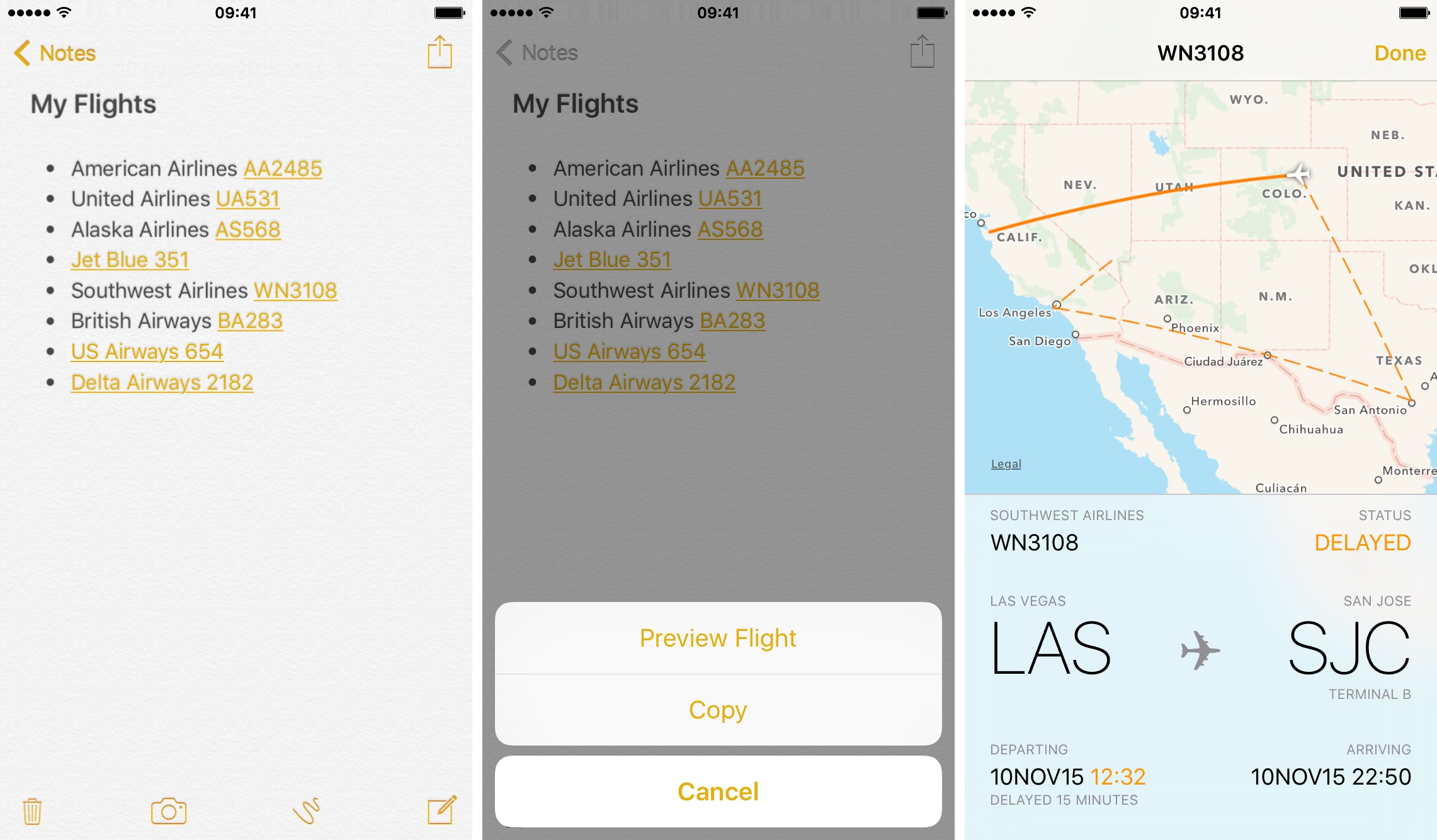 Step 4: Choose Preview Flight to continue. This will put up the flight preview screen.

Step 1: Launch Mail, Messages, or Notes on your iPhone, iPod touch or iPad.

Step 2: Create a sample item if you haven’t already by typing the airline and flight number into a new note.

Step 3: Press one of the links firmly to peek your flight. From there, you can slide your finger upward to reveal the option to send the flight number to the system clipboard, or press harder to pop the full-screen flight preview view. 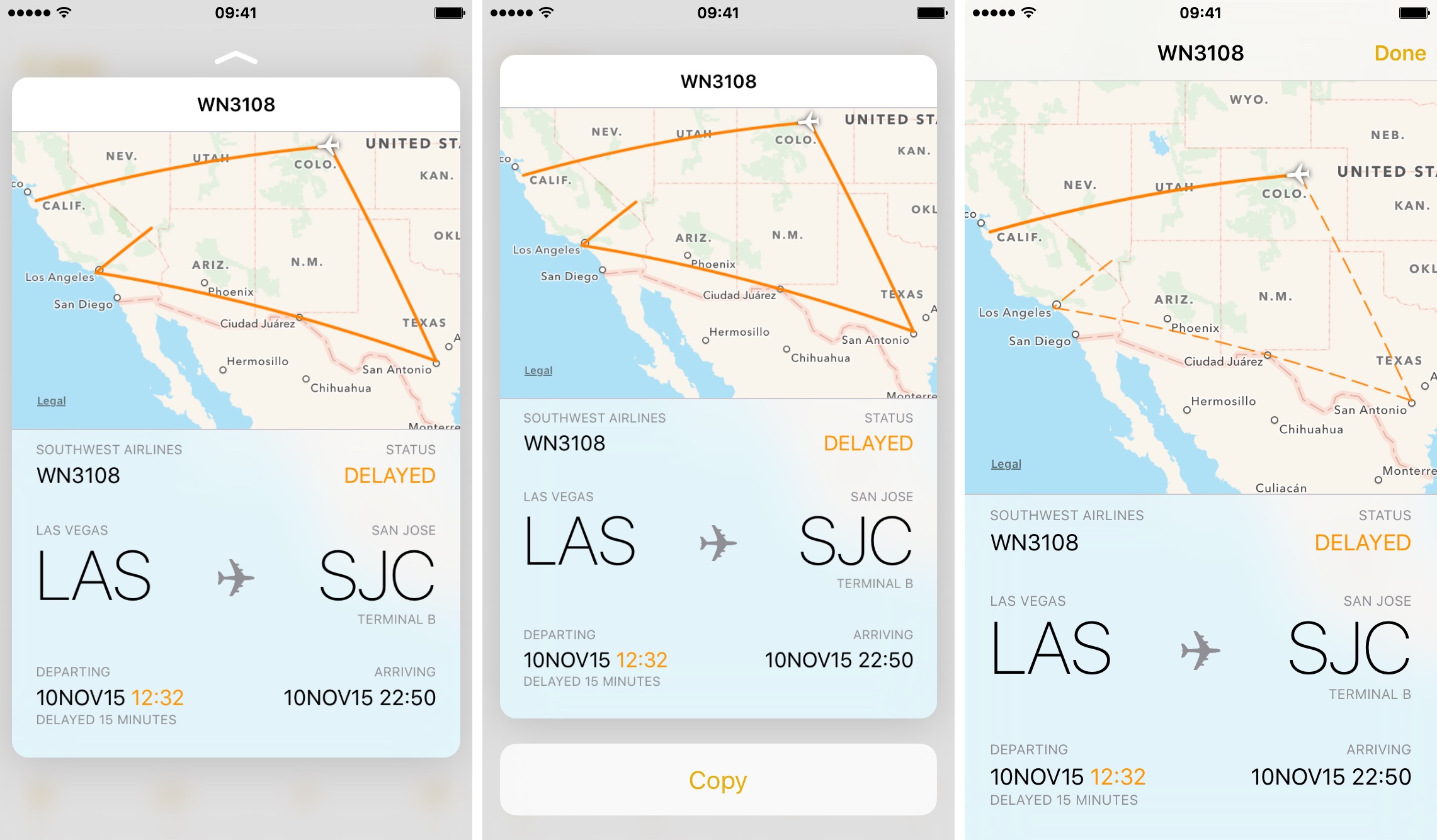 If you own a MacBook with a Force Touch-enabled trackpad, you can force-click a flight number just like with 3D Touch on the latest iPhones.

How to preview flight information on Mac

Step 1: Launch Mail, Messages, or Notes on your Mac.

Step 2: Create a few sample items if you haven’t already by typing the airline and flight number into a new note.

Step 3: Click a desired flight number and its arrow to bring up a contextual menu. 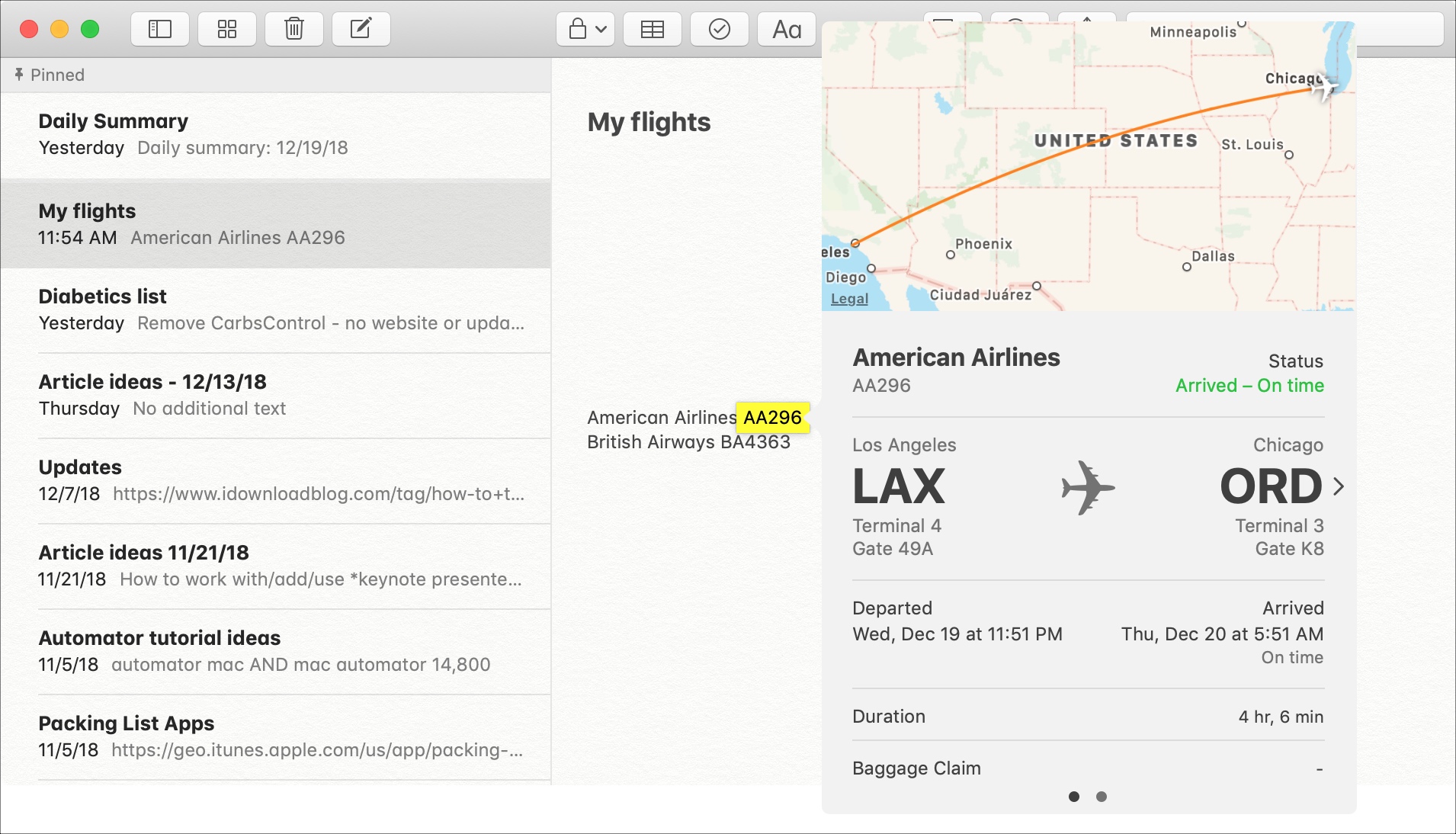 The flight preview screen gives you a real-time update for the flight, including a map with the projected flight trajectory and information about any delays, all updated in real-time.

The screen is dominated by a mapped overview of the flight path. The remaining portion of the interface displays essential information such as your flight number, the departing and arriving airport and terminal, an estimated arrival time with to-the-minute accuracy, information whether the flight is arriving on time/early, has been delayed or landed.

The flight information screen is interactive. For instance, you can quickly position the map on the departing or arriving airport by tapping its abbreviation, such as LAS or SJC. 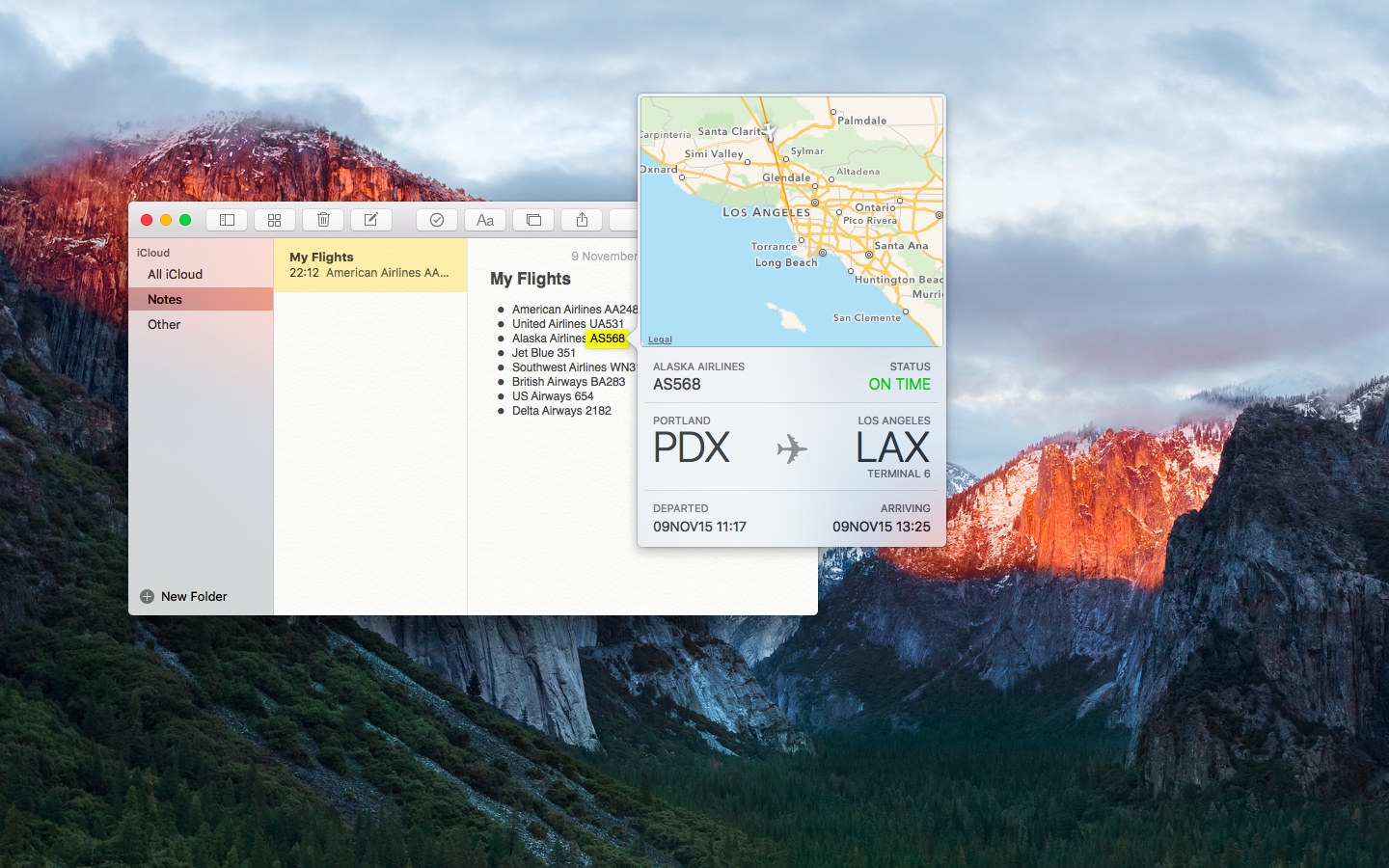 Tap on the airplane icon between the two official city abbreviations to center the map on how far along the route the flight currently is, as determined in near real-time.

You can also zoom in on the map on an iOS device by holding the two fingers on the map and spreading them apart (zooming the map preview isn’t supported on the Mac). On iOS devices, the flight preview screen works in both portrait and landscape.

Where does this data come from?

If history is an indication, it’s entirely conceivable that the company is using multiple data sources for flights. Also, iOS’s Proactive assistant doesn’t seem to be aware of flight delays so you won’t get notified if your flight has been postponed.

If you need more information about your flights, we suggest read our roundup of the best apps for tracking flights on iPhone.

Is this tip useful?

If so, give us a shoutout in comments and pass this article along to your friends. Shoot us your tutorial ideas at tips@iDownloadBlog.com.