Have you ever wanted to effortlessly create a collage of emoji emoticons from your own photos? As in, with just a few taps and no prior Photoshop knowledge whatsoever?

I’m a big sucker for ASCII art and there certainly is no shortage of such apps in the App Store, but I wanna move beyond ASCII and have the freedom to create collages based on my iPhone’s emoji keyboard.

I’m also interested in experimenting with app icons and other icons sets. If you’re anything like me, you’ll want to check out Emojify, a cool iPhone app by Singapore-based studio called VoidWorks.

With Emojify, you can quickly turn your pixels into pieces of art comprised of a bunch of tiny icons and emoji characters, and even export them in high-resolution to create stunning 20-by–20 inch prints.

Upon granting Emojify access to your photos, you’re presented with a photo picker to select an image from your Camera roll, or quickly snap a new one using your iPhone’s camera. I’m going to use one of my summer vacation photo to see how the app handles various details in that shot. 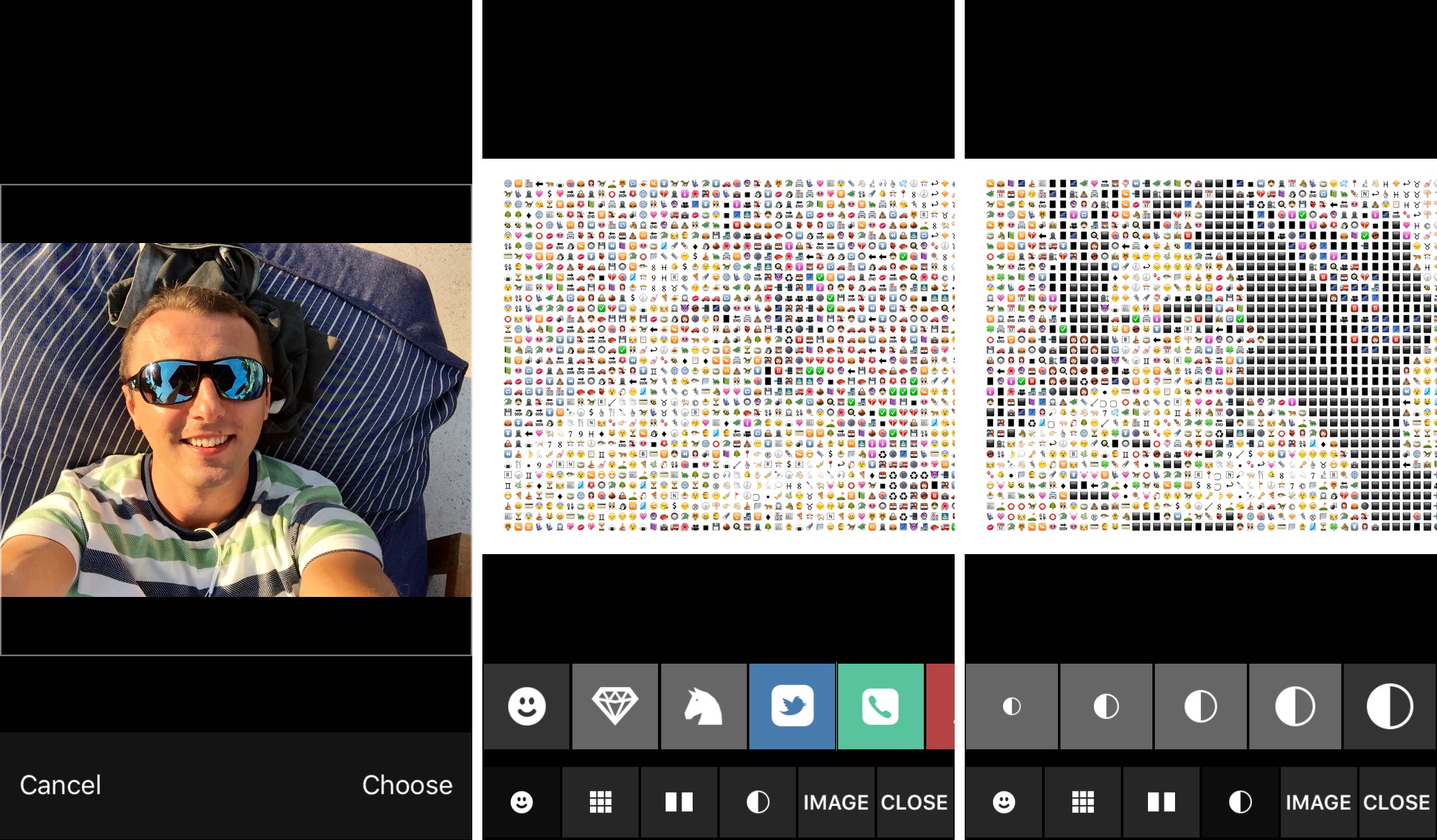 You can clearly see that the resulting images are created entirely with sets of icons. The results are rather promising but I’m not satisfied yet so I’ll need to move those sliders around.

Thankfully, the user interface is minimalistic and straightforward. Alongside the bottom, you have a set of large buttons representing the available icon sets. Further below is your toolbar with various adjustments for controlling how your artwork is created.

Now, the app works best with photos of a single subject and with a clear contrast of light and shadow. Due to the design of the icon sets that make up your artwork, you will need to experiment with various settings and sliders to achieve best results.

As an example, the screenshots below depict some fun pop icons, at left, and iOS 7 icons that I purchased for the purposes of this review, at right. I zoomed in on each image so you can see the actual icons. Pretty cool, wouldn’t your agree?

Yet another screenshot below shows off the various effects I achieved by modifying parameters like the icon spacing. I also dragged sliders to vary the number of the icons used to render my photos and changed the contrast of the algorithm used.

Now, the coolest thing about Emojify is that you can print your creations as huge posters to hang around your walls at home because this app can export images in up to 16-megapixel resolution—perfectly suited for detailed 20-by-20 inch prints.

Once you’re satisfied with your artwork and have zoomed/cropped it properly, you can show it off to friends and family on social media and various other services and apps through iOS’s multi-purpose Share sheet.

As I mentioned before, Emojify is a straightforward app. If you’ve used image editing apps before, you’ll feel right at home in Emojify. Expect to get a decent mileage out of the initial set of emoji icons bundled with your download.

Turning your face into a piece of emoji art is priceless so I was saddened realizing that additional sets of icons, like ASCII art, iOS 7 icons and flag icons, are 99 cents each.

Aside from purchasable icon sets, my other quibble with this app is lack of native display support for the iPhone 6/6s and iPhone 6 Plus/6s Plus and the fact that it unnecessarily crops out your photos to a square.

This one goes to all you ASCII art lovers out there. 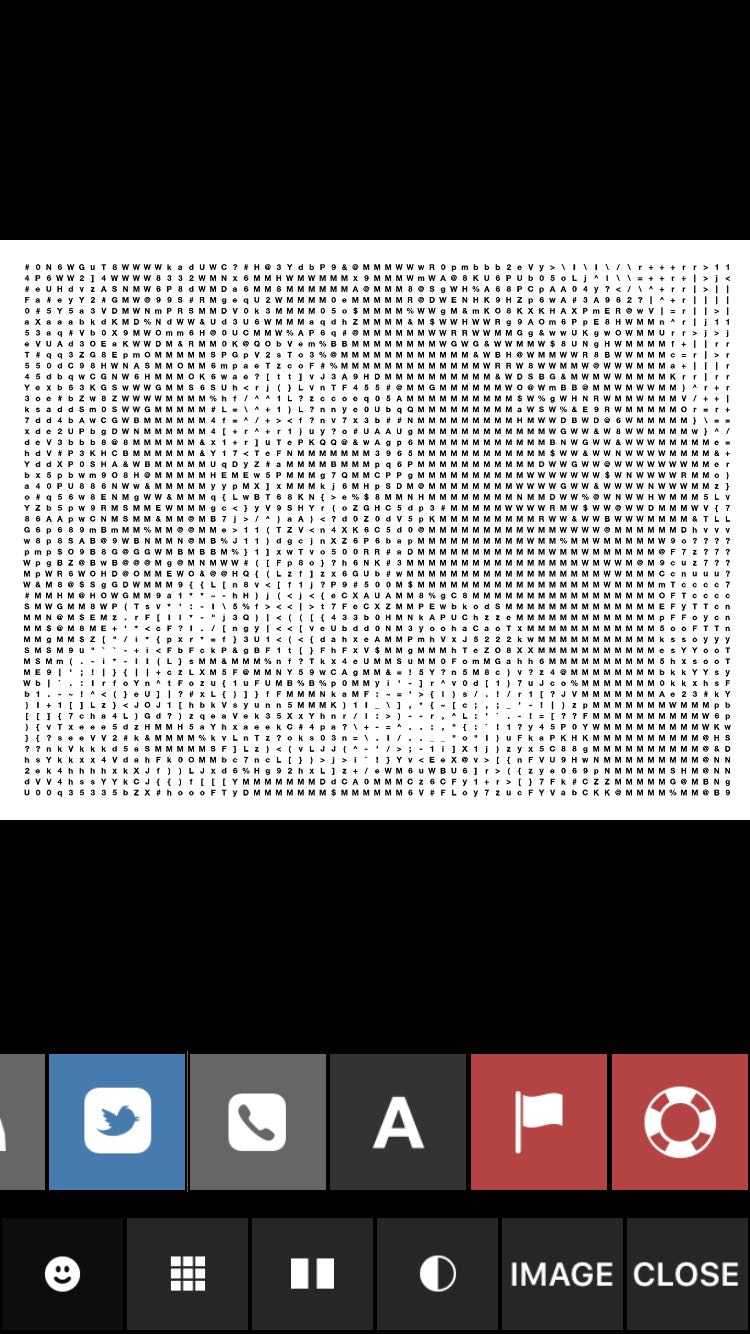 One final warning: if you’ve never played with ASCII art before, don’t expect miracles from Emojify: you might get disappointed realizing that your creations look barely like the originals. Experimentation is key here so do adjust those sliders.

I found out that setting higher concentrations of emojis resulted in greater detail in my artworks. I was also able to achieve better results by playing around with the emoji contrast and spacing settings. And for best results, always use photos with one clear subject set against a contrasting background.

Emojify requires an iPhone, iPod touch or iPad with iOS 6.0 or later.

Grab Emojify for 99 cents in the App Store.