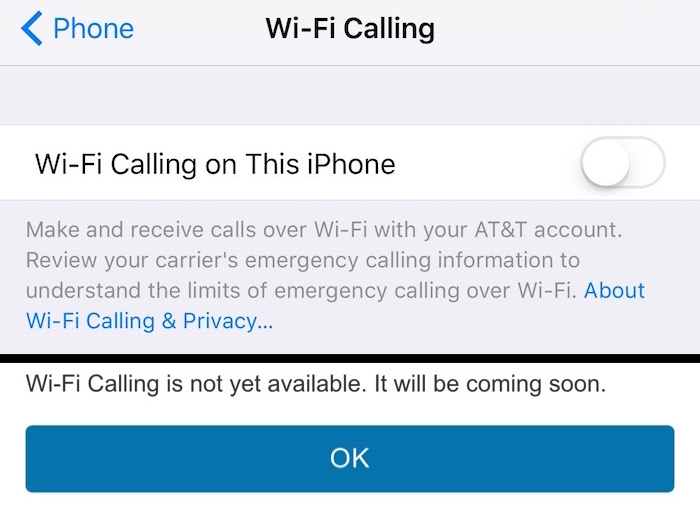 As reported by Fierce Wireless, U.S. carrier AT&T is delaying a public release of the Wi-Fi Calling feature over the decision to wait for a waiver by The Federal Communications Commission (FCC) that would temporarily relieve the company of having to support options for deaf and hard-of-hearing people.

Attempting to enable the feature on iPhones running iOS 9.0 or later by flipping the Wi-Fi Calling switch in Settings → Phone to the ON position yields a “Wi-Fi Calling is not yet available. It will be coming soon” message.

The FCC requires that all calling services support teletypewriter (TTY) services for the deaf. However, AT&T wants to replace the outdated TTY protocol with more modern real-time text (RTT) support instead.

The company went so far as to call out rivals Sprint and T-Mobile over launching Wi-Fi Calling on their networks without supporting the FCC’s rules.

“This past Friday, September 25, was the date on which AT&T intended to introduce Wi-Fi calling services in competition with other competitors in the market, namely T-Mobile and Sprint,” AT&T wrote in its filing.

“Those carriers have been offering Wi-Fi calling services for a significant period of time, well over a year on Android devices and for months on iOS devices,” the filing notes.

“Neither of those carriers has approached the FCC to request a waiver of the TTY rules. Because the commission has not granted AT&T’s waiver petition, we are not in a position to provide Wi-Fi calling services to our customers even while our competitors provide those services in defiance of the commission’s rules.”

While AT&T planned on enabling Wi-Fi Calling on the day the new iPhone 6s and iPhone 6s Plus launched, it ultimately delayed the service and has now requested for a temporary waiver from needing to implement TTY support until then.

“Doing so will enable AT&T to offer its customers Wi-Fi calling capabilities and correct the asymmetry that today exists between AT&T and its mobile services competitors over remaining in compliance with existing FCC regulations when deploying new services,” wrote the carrier in its most recent filing on the matter.