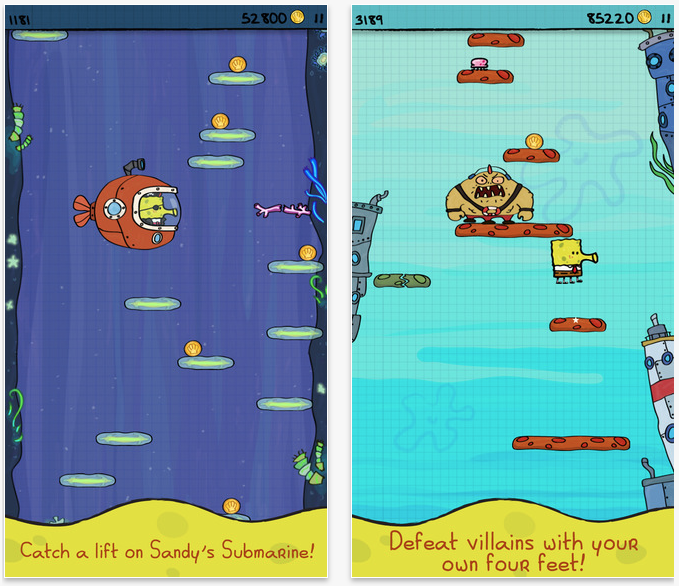 Apple has named Nickelodeon’s “Doodle Jump SpongeBob SquarePants” its App of the Week for this week. This means that from now through next Thursday, you could grab the special SpongeBob edition of the popular platformer for free—a solid savings of $2.

In the game, players are tasked with restoring order to Bikini Bottom after Plankton and his crew steal the Krabby Patty Secret Formula. You do this by helping Doodle Jump SpongeBob jump up and across the sea, blasting bubbles at anyone who gets in his way.

From the App Store Editors’ notes:

A gaming legend gets a SpongeBob makeover in this delightful Doodle Jump spinoff. Guide the affable hero through dozens of stages set in Bikini Bottom, titling your device to hop from platform to platform while facing Plankton’s gang of scoundrels. Non-stop action, adorable graphics, and clever use of SpongeBob’s friends (Patrick’s belly is a trampoline!) make for a perfectly endearing mashup.

Doodle Jump is so good that anytime you have the chance to experience it for free you should take it, and of course this should be a no-brainer for SpongeBob fans. Just beware of the in-app purchases, which are there to help you unlock portions of the game faster.

If you’re interested, you can find Doodle Jump SpongeBob SquarePants in the App Store, for both iPhone and iPad, for free.