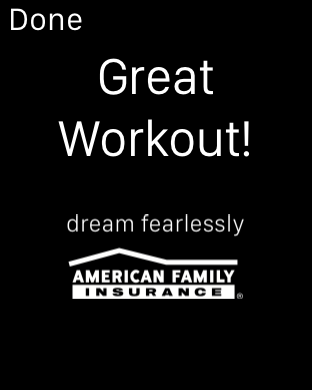 I just finished tracking a run using the free version of Map My Run, and after saving that workout directly from my Apple Watch, I was presented with the above screen. Granted, I use the free ad-supported version of the Map My Run app, and while I do expect to see ads on the iPhone app, it was kind of surprising to see an ad right there on my wrist.

I’m sure Map My Run is not the first app to push ads to Apple Watch, and unfortunately, I’m also sure this is the beginning of a new practice that will become widespread in the industry. After all, can we really blame developers for trying to make a living? Of course not.

As content blockers for Safari on iOS 9 are nearing release, publishers and ad networks alike are soiling their underwear at the thought that the bread and butter of their business will slip away. As a content publisher myself, I’m no stranger to that feeling.

In-app ads might just be our redemption, or maybe more accurately said, one of our last remaining options. And with that in mind, it comes as no surprise that Apple Watch will be the next frontier for ads.

Right now, these ads aren’t too invasive. They’re merely a piece of branding, or “sponsored screen,” but we can easily imagine this getting out of hand as Apple Watch becomes a more capable and independent device in the near future.

Again, I’m not blaming developers for trying to make money. It just feels weird to have your most personal device become the bridge between you and a company trying to sell you something.