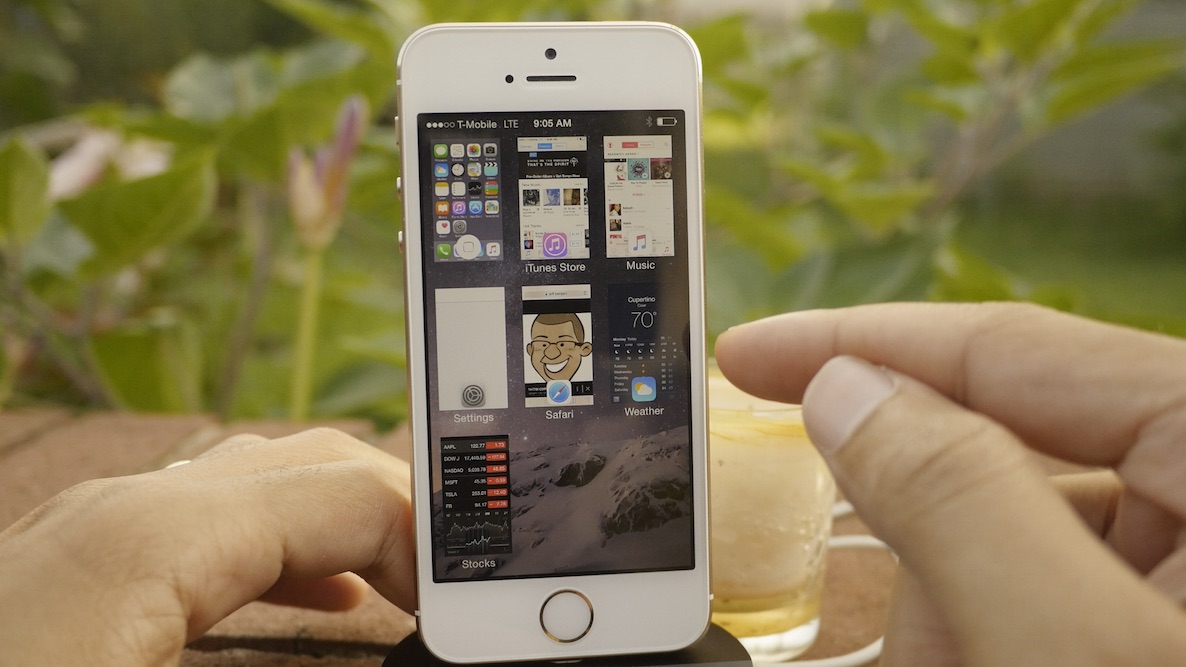 Well-respected developer Kyle Howells, and renowned UI designer, Surenix, have teamed up for something special. Their new collaborative project, called Alympus, has just been released on Cydia, and it brings a completely redesigned App Switcher, Control Center, and Music Controls interface to iOS 8.

Alympus was teased this past Sunday, but that teaser was just that—a tease. In the video that follows, I’ll break down all of Alympus’ features. Once you see all of what Alympus has to offer, I think you’ll agree that there’s more than meets the eye.

At its most basic level Alympus is an App Switcher replacement. The App Switcher, which can be invoked via the standard double-press of the Home button or via a simple swipe-up gesture from the bottom of the screen, features a customizable layout. 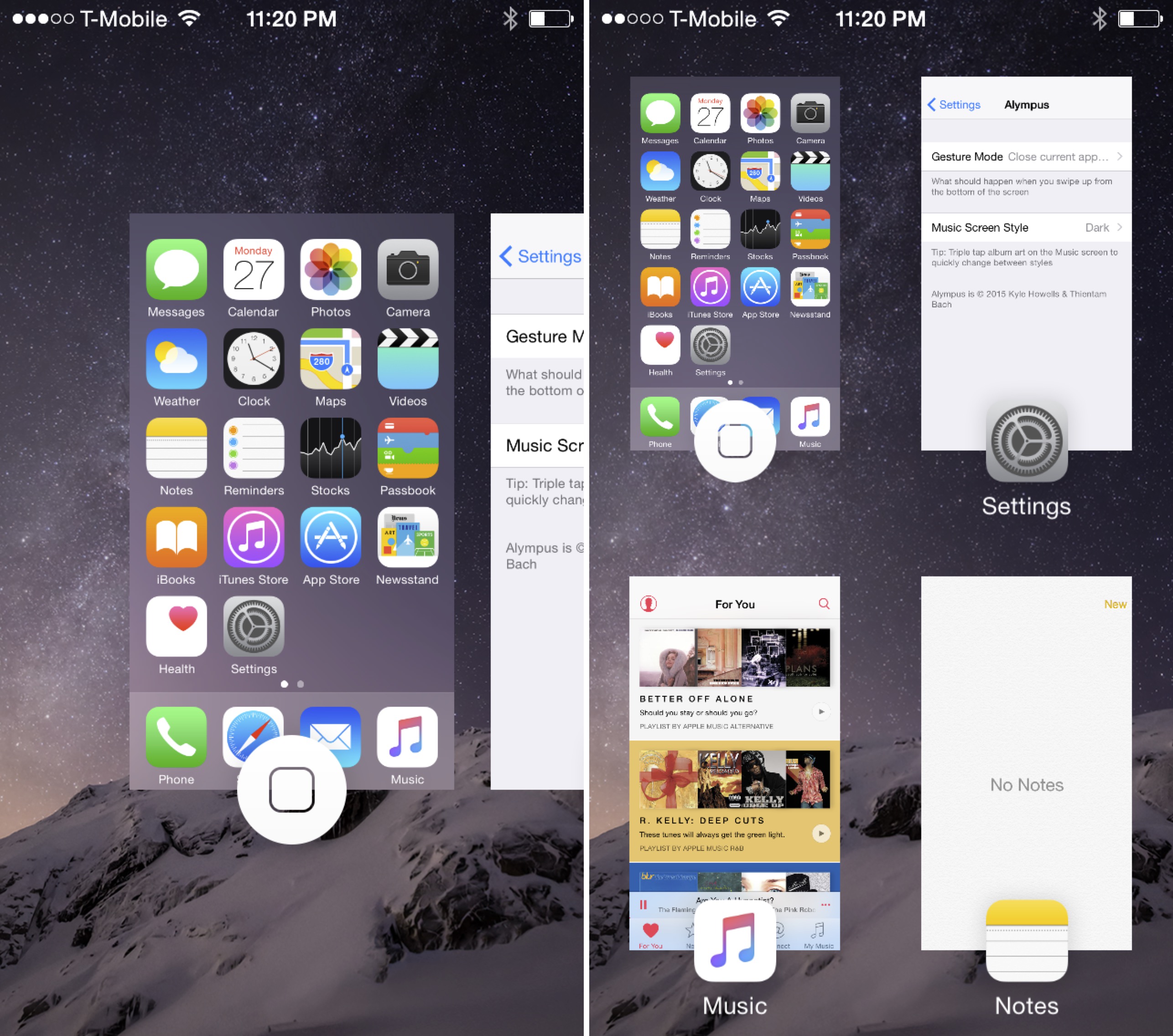 The App Switcher in Alympus is customizable by means of a pinch gesture. In total, there are four different App Switcher zoom levels to pick from. Once a zoom level is selected, the App Switcher stays configured that way until you change it. There’s really no need to mess with the zoom levels unless you just want to. 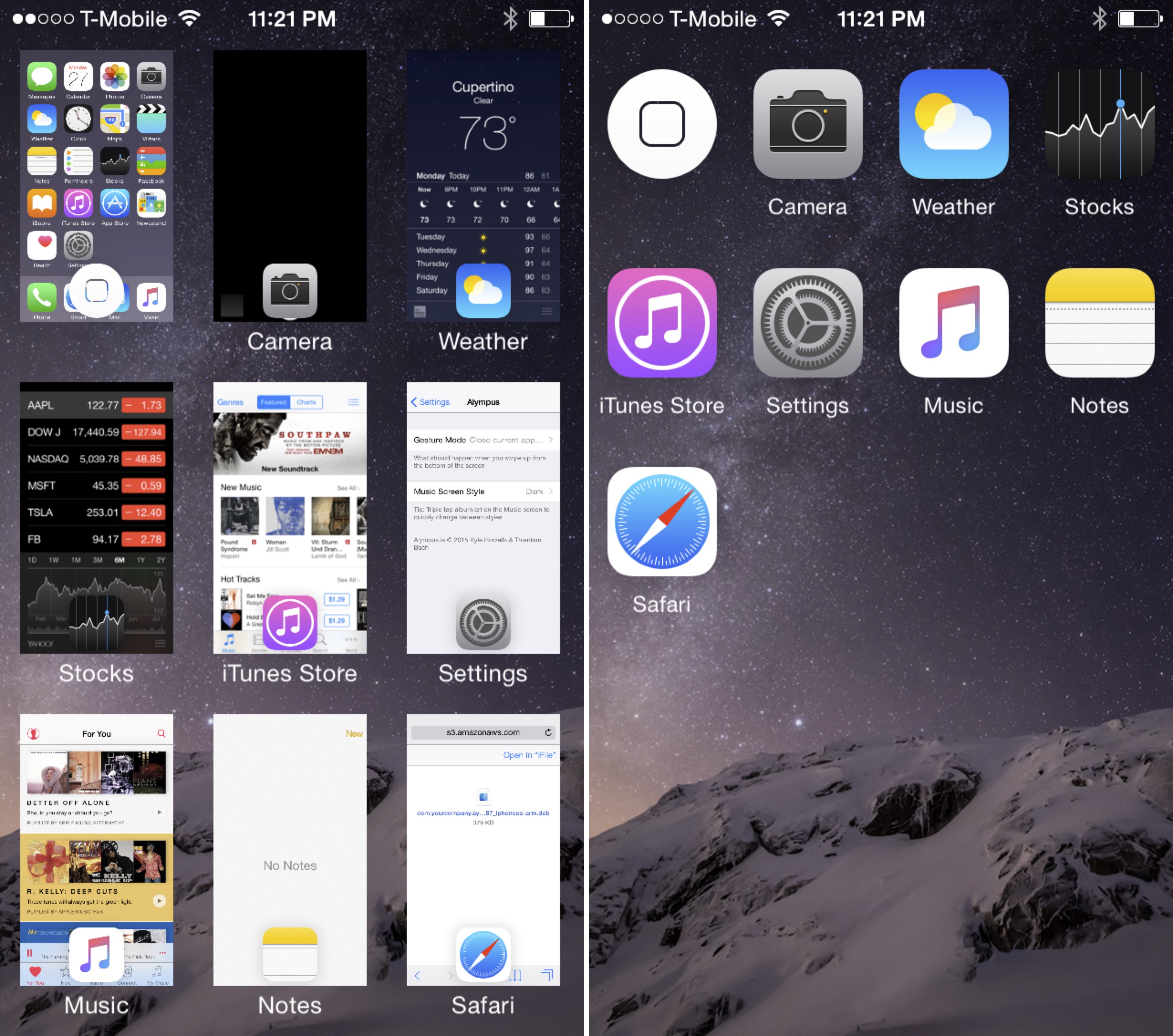 By swiping up on a particular App Switcher card or icon, you can force-close the associated app. You can also perform a slingshot gesture by pulling down and releasing on a App Switcher card to force close apps as well. 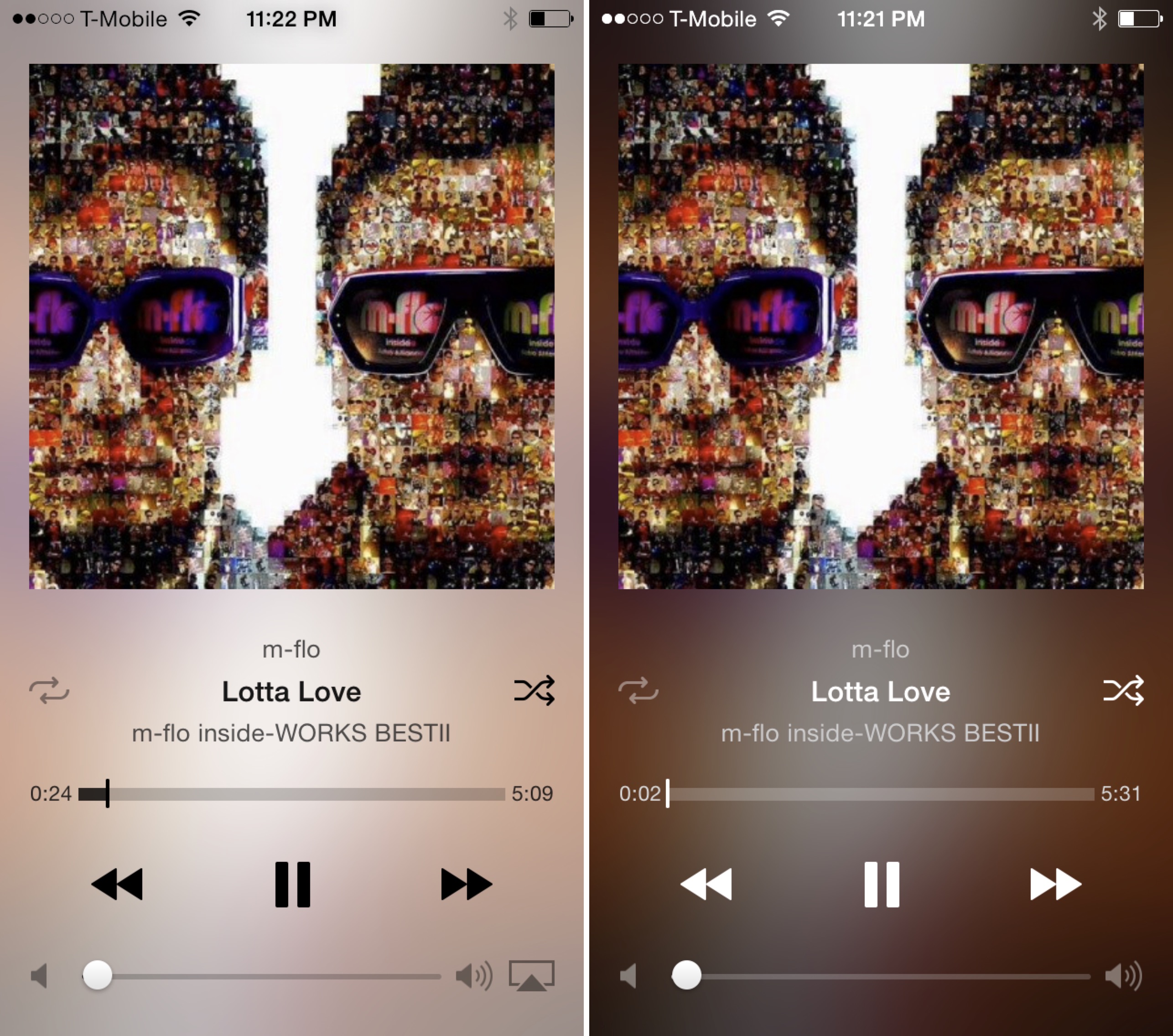 By double-tapping on the album artwork while viewing the Music Controls, you can be transported directly to the stock Music app. You can also triple-tap the album artwork to switch between Alympus’ dark and light mode. This setting can also be adjusted by means of Alympus’ preferences in the stock Settings app. 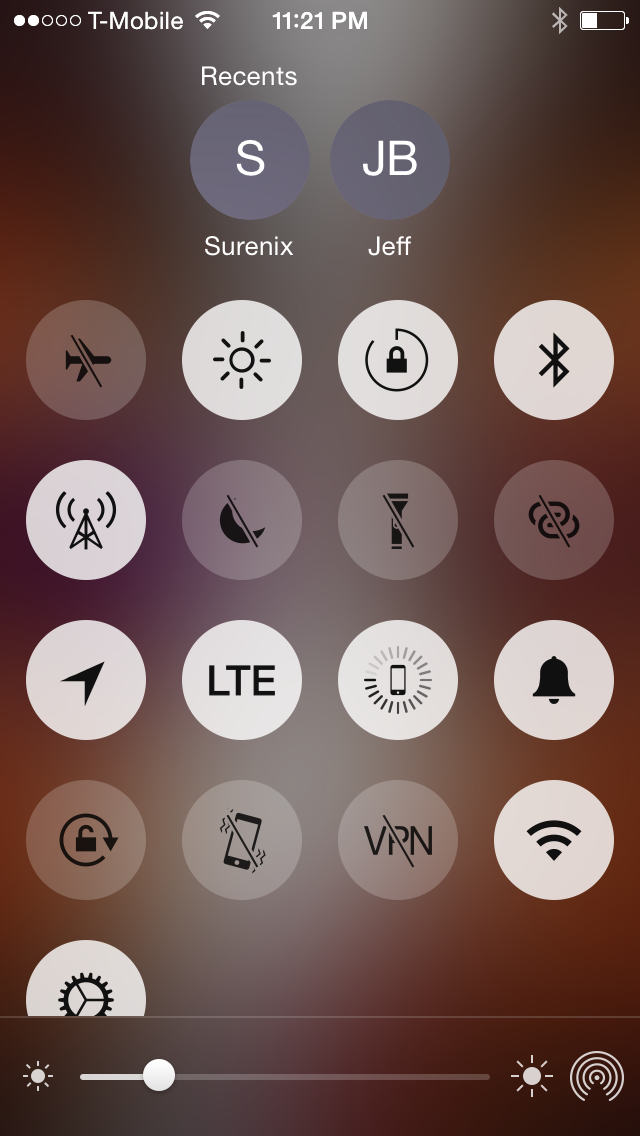 By using a long press and drag gesture, users can rearrange the order of the toggles with ease. In addition, you’ll see the Recent Contacts shortcuts above the group of toggles.

Alympus’ preference pane in the stock Settings app is sparse, but the settings that are there are quite important. The most important setting found here is the Gesture Mode setting. Gesture Mode allows you to assign a specific action to the swipe-up gesture from the bottom of the screen.

You can use the Gesture Mode to close the current app, sort of like Zephyr of old, or you can use it to invoke the App Switcher, or emulate stock iOS and open Control Center. I personally prefer to use the Open App Switcher gesture, since it allows for the quickest path to the App Switcher by means of a gesture. 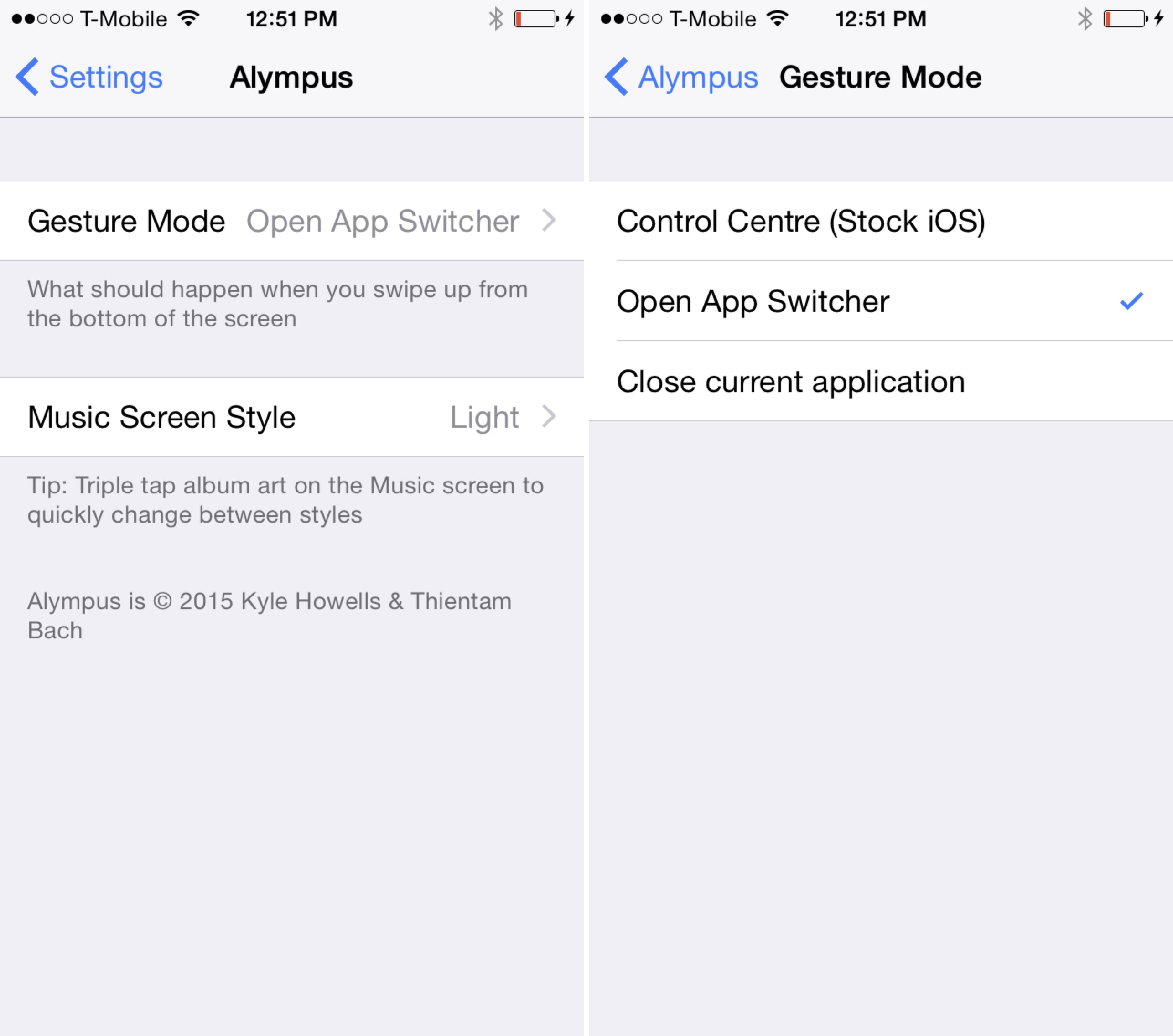 Of course, you can always use a double-press of the Home button to invoke the Alympus interface, or you can decide to open Activator and reassign the action to your gesture of choice.

One of the most impressive features that I found while using Alympus is the continuous gesture. If you have the Open App Switcher gesture configured, you can open the App Switcher and slide over to the music controls or toggles in one continuous motion. Watch the video above and you’ll see what I mean.

Alympus features awesome design and animations, and you can tell that a lot of love and meticulous care was put into its creation. Along with Surenix’s design comes underpinnings by one of the best developers on Cydia. 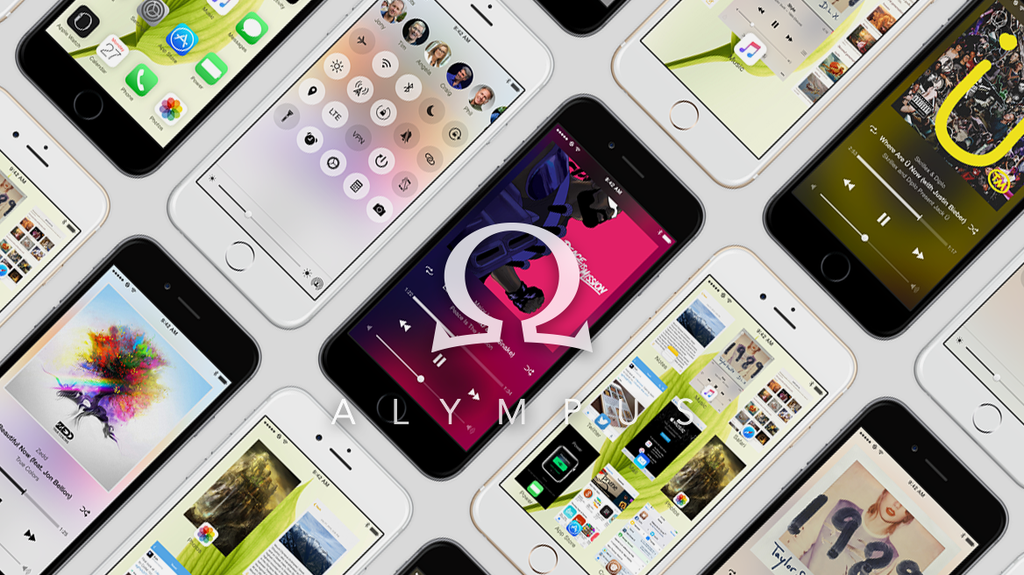 At $3.99, Alympus is definitely on the higher end of the spectrum when it comes to price, but its feature set, its smoothness, and practicality make it highly worth considering. It’s a tweak that’s easy to use and simple, but features enough personalization to make it fit the individual.

What do you think about Alympus?