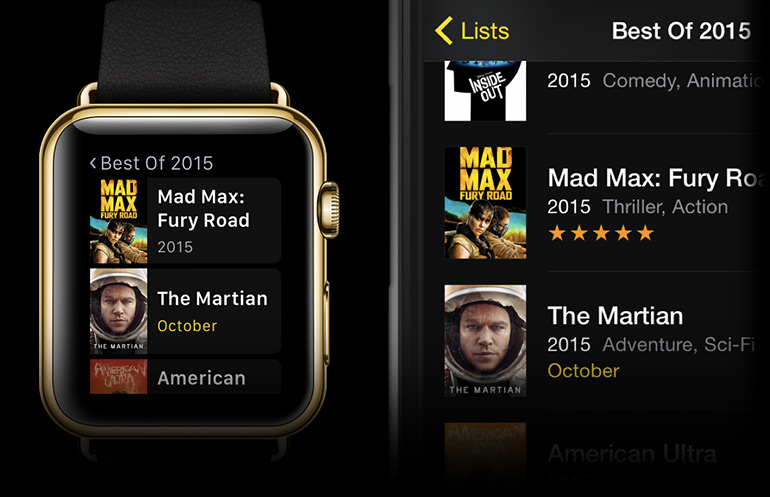 As a longtime fan of TodoMovies, an excellent movie tracker by German developer Taphive, I’ve been using the app to keep tabs on the movies I wanted to watch.

Since its March 2014 App Store debut, developers have constantly updated the app with meaningful feature additions like Motion Posters in TodoMovies 2, a revamped design in TodoMovies 3 and lots of other goodies.

Previously a $1.99 download, TodoMovies went the freemium route and it did help widen the app’s user base. And as of Thursday, TodoMovies 4 is available in the App Store with tons more perks.

For starters, it now offers a nicely designed Apple Watch app for your wrist. On the iPhone side, enhancements include custom lists, a richer movie details view, tab-based navigation, support for the iPhone 6 and iPhone 6 Plus screens and more.

Read on for a quick review based on my brief hands-on time with the new version.

TodoMovies 4 is much more useful and fun with custom lists.

Previously, you had to cope with built-in Watch and Watched lists for the movies you wanted to watch and those you’d watched, respectively. TodoMovies 4 lets you create your own lists for “Movies to Buy or Rent,” “Best Movies of 2014” and so forth.

Adding a movie to your custom list is done from the movie details view, by tapping the Custom Lists button. A menu will then show you all of the custom lists you have created, and you can then tap the ones you want to add the item to. 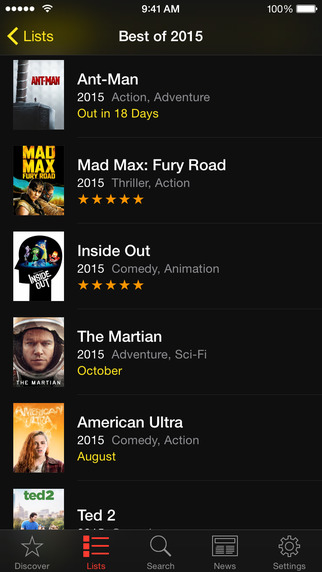 Keep in mind, however, that free users can create only one custom list.

Movie buffs who need more than one custom list will need to buy an Unlimited Custom Lists, a $2.99 upgrade via the In-App Purchase mechanism which also removes advertising from the app.

Not only has the movie details screen been redesigned for better appearance, but now also provides richer data about your favorite movie. Just scroll down on the poster to access the revamped details view for the currently selected movie. 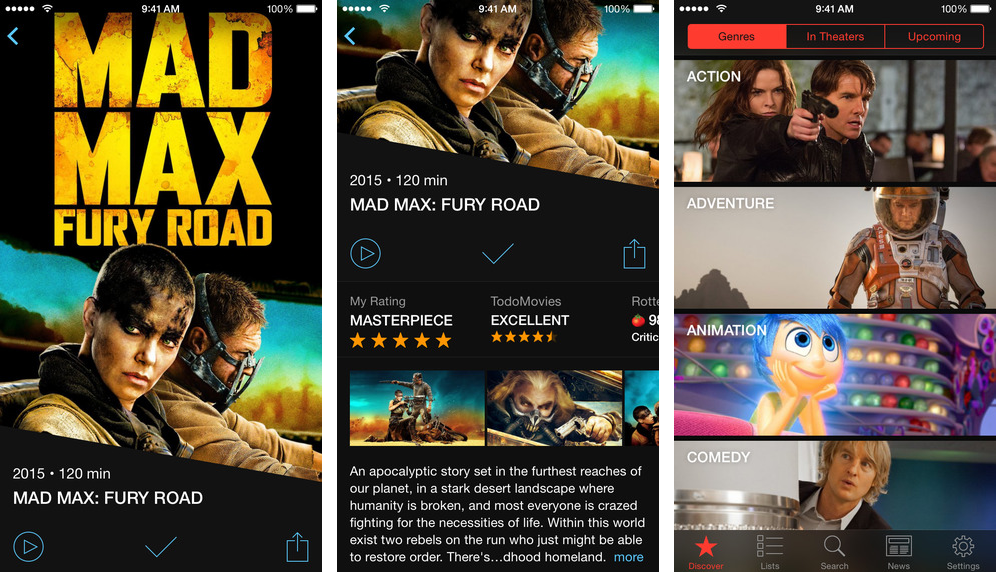 As you can see above, the redesigned view offers basic information such as the movie’s title, release year and more, with more information accessible by way of scrolling: the movie summary, a synopsis, cast, a critic rating, available downloads on iTunes and other pertinent information.

This screen also provides shortcuts for adding a movie to your Watch list, sharing it with friends and watching a trailer. You can even copy the movie poster or save it to the Camera roll by long-tapping the image.

TodoMovies 4 is now available on your wrist as an Apple Watch app. You can mark any movie as watched, rate individual movies and more, right from your wrist. 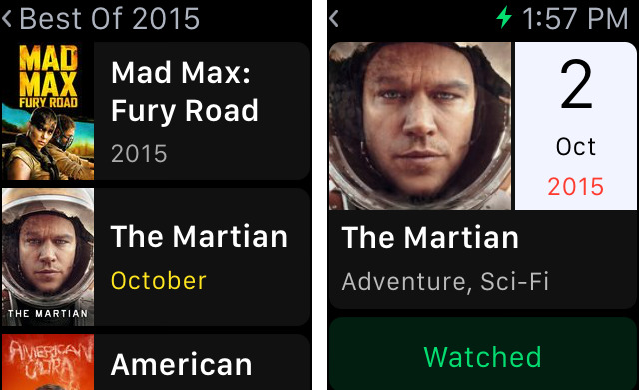 Crucially, TodoMovies 4 for Apple Watch allows you to browse any custom list you have created in the iPhone app.

Pressing the display firmly reveals hidden options for refreshing the list and changing the sort order for custom lists by Added, New to Old, Old to New and Alphabetical.

Before today, TodoMovies used to employe a sidebar-based navigation.

Those many apps employ this system, tapping the hamburger icon in the upper left corner gets old fast as you explore the app’s options and features. 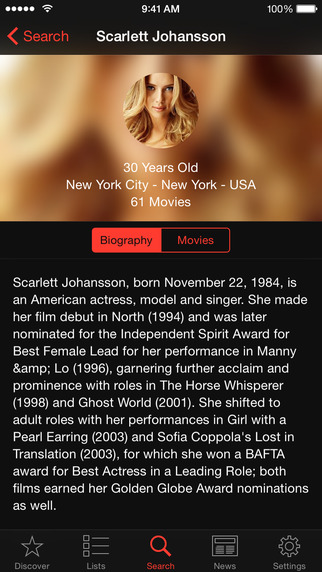 If you own one of the newest iPhone models, TodoMovies 4 will take full advantage of the native display resolution of the 4.7-inch iPhone 6 and 5.5-inch iPhone 6 Plus so you’ll see more content and scroll less.

And of course, playing a movie trailer from the movie details view will take full advantage of the native 1080p Retina HD display that the iPhone 6 Plus offers.

Overall, TodoMovies 4 is a major update.

It improves your experience with several enhancements like an optimized user interface, more informative movie details screens, faster navigation that puts frequently used options in the tab bar alongside the bottom and more.

The Apple Watch app, though not earth shattering, offers a decent set of features for quickly marking movies as watched and checking out your custom lists. And with support for jumbo-sized iPhones, TodoMovies looks better than ever on latest iPhones.

On the flip side, I wish TodoMovies allowed me to export lists and data as a CSV file to import into other apps. I don’t like it when apps lock my data. And, I’m still yearning for a native iPad interface as this app would admittedly benefit tremendously from a bigger canvas.

But despite the aforesaid complaints, TodoMovies 4 in its current incarnation is arguably among the most comprehensive movie-tracking apps available on the App Store.

And because it’s free, I don’t see a reason why you shouldn’t give it a whirl.

TodoMovies 4 is free in the App Store.