Apple yesterday refreshed its aging lineup of iPod-branded music players. By and large, the iPod touch has received its most substantial upgrade yet as Apple really went all out with upgrades on the hardware front.

Not only does the new iPod touch run the latest Apple-designed “A8” processor as the iPhone 6 and iPhone 6 Plus, but includes the M8 motion coprocessor, a much-improved eight-megapixel camera on the back, three times faster Wi-Fi and the latest in Bluetooth networking.

Here are some interesting tidbits related to the iPod touch’s hardware surprises.

But before we get to it, just a few observations concerning the iPod nano.

According to Daring Fireball’s John Gruber, that may have something to do with the fact that everybody who worked on the nano software now works on the Apple watch team.

“Word from a few little birdies is that what remains of the iPod software team is now working on Apple Watch — the Nano UI wasn’t updated to look like iOS 7 because there’s no one left to do it,” he wrote.

As for the new iPod touch, its hardware ID is ‘iPod7,1’ versus ‘iPod5,1’ for the previous model, but you won’t find that on Apple’s iPod touch specs page.

It’s interesting that Apple skipped ‘iPod6,1’ and went straight to ‘iPod7,1,’ which, to me, is yet another indication of a major hardware bump.

Apple claims the A8 processor inside the new iPod touch is six times faster than the A5 chip inside its predecessor, as well as ten times faster in graphics performance.

Having run an initial Geekbench CPU benchmark on their review unit, TechCrunch was able to confirm that the Apple-designed A8 chip inside the new iPod touch is underclocked slightly from the iPhone 6, presumably to manage battery life, running at 1.10GHz per core vs the iPhone 6’s A8 processor which runs at 1.39GHz per core. 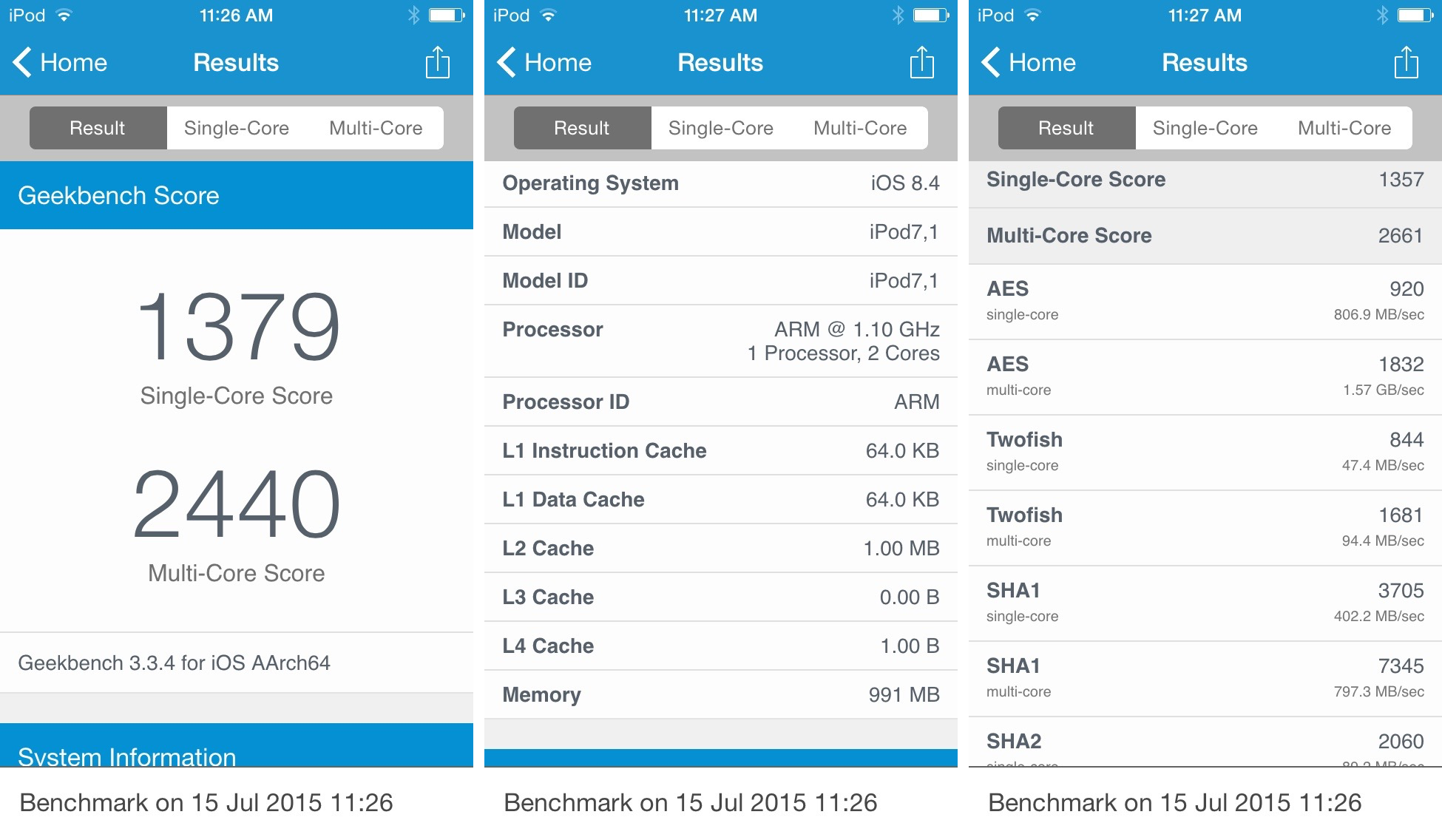 Keep in mind that the new iPod touch doesn’t really need all the power of the iPhone 6’s A8 chip due to its smaller screen and lower pixel count.

The device also has 1GB of RAM, like the iPhone 6.

The iPod touch used to be vastly underpowered versus its comparable iPhone generation in terms of hardware, but this new model changes all that. It’s still not on par with the iPhone 6 in terms of CPU/GPU power, but the gap is now much narrower than before.

With the A8 chip powering it, not only does the new iPod touch run latest Metal-optimized games and apps smoothly, it’ll also support the upcoming iOS 9 with ease and future iOS releases, too.

The new iPod touch has Apple’s latest M8 motion coprocessor which also ticks inside the iPhone 6, iPhone 6 Plus, iPad Air 2 and iPad mini 3. The chip allows the device to track your motion and fitness data for recording in the Health database and elsewhere while using very little energy because it tracks movement on its own, without waking the main, power-hungry A8 processor.

An improved FaceTime HD camera out the front now supports burst mode and HDR stills and video, courtesy of an updated sensor with larger pixels for better low-light selfies.

The back-facing iSight camera has gone from five to eight megapixels.

Specs aside, it’s not the same camera as the iPhone 6 in terms of the CMOS sensor. It’s more like an iPhone 5s camera with some of the imaging technologies from the iPhone 6 due to the latest Image Signal Processor provided by the A8 chip.

To take advantage of three times faster data transfer, your new iPod touch must be connected to a compatible 802.11ac hotspot provided by a compatible router or modem such as the latest-generation Time Capsule or AirPort Extreme.

“The consumer can leave the room and upon returning, two recently used devices reconnect without user intervention,” reads the website. Improvements to data transfer allow Bluetooth 4.1 fitness sensors that gather data during a run, bike ride or swim, to transfer that data more efficiently when your return home.

“For example, a smart watch acts as a hub gathering information from a Bluetooth Smart heart rate monitor while simultaneously acting as a peripheral to a smartphone — displaying new message notifications from the phone,” notes the Bluetooth website.

For reference, the Apple Watch has Bluetooth 4.0, like the iPhone 6, iPhone 6 Plus, iPad Air 2 and other iOS devices.

Here’s what the new iPod touch doesn’t have:

While the lack of Touch ID is surprising, I don’t think the iPod touch will be getting LTE connectivity anytime soon. It’s a media device, not a phone. And if Apple added cellular connectivity, the iPod touches would basically become iPhones, and then they’d need to add a microphone and an earpiece.

To me, the iPod touch has always been an epitome of an entertainment mobile device.

It’s an iPhone without the phone part, albeit way more affordable than any unsubsidized iPhone has ever been. It’s also the perfect App Store machine for anyone interested in iOS and, according to many journalists, the best handheld mobile gaming device around.

And with the much improved camera, it’s now “the new point-and-shoot,” as TechCrunch puts it. I don’t pretend to have knowledge of Apple’s pipeline, but I don’t think the iPod touch will be going away anytime soon.

It helps Apple widen the addressable market for App Store developers while bringing new users into the fold. That it makes for a very attractive, ultra-thin form factor to carry in your pocket doesn’t hurt either.

The new iPod touch is the ultimate iOS device and at just $199, it’s within nearly everyone’s reach. Apple just needs to follow its strategy of keeping the barrier to entry low and update the iPod touch on an annual basis with the latest technologies.

And your thoughts on the new iPod touch?