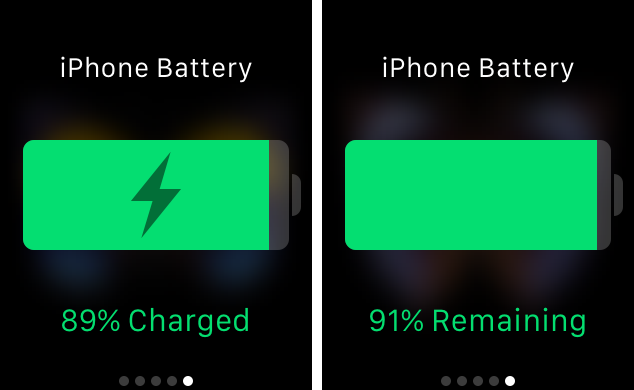 Surenix, mostly known for his design work on jailbreak themes and tweaks such as ayeris and auki, has released his first application in the App Store. Called Power, the  app aims at making it easy to quickly check at the status of your iPhone battery directly from your Apple Watch.

Power comes as a standalone Apple Watch app, including a Glance. You can either check the status of your iPhone battery by opening the app, or swiping up to reveal the Glance, which I must say seems to be a much quicker way.

“We wanted to design a simple yet useful app for both Apple Watch and iPhone that looks native and beautiful on iOS. And we did it, with Power,” reads the App Store description of the app.

Arguably, Power doesn’t offer anything new in terms of functionality, and comes at a price too.

When asked about the price tag, Surenix says “there are other apps out there that are $0.99 or free, I get it. But I think this app is well designed and developed.” Having played with the app for a while, I can agree the app looks simple and elegant, in typical Apple fashion, something Surenix often captures well in his designs.

Ultimately, users looking for this sort of feature on Apple Watch will have plenty of options, paid and free, but as Surenix himself says, it is an elegant app. At the end of the day, the decision comes to whether you want support the guy and pay $0.99 for Power, or simply want the functionality similar to what it offers and opt for alternatives. You be the judge.