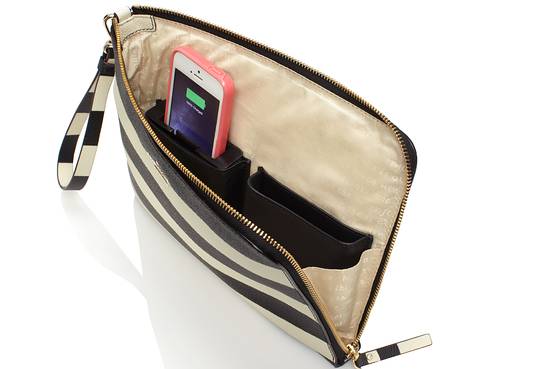 These fashionable accessories for women will sport the ability to recharge iPhones, including all Lightning-based models from the iPhone 5 through the iPhone 6 Plus, The Wall Street Journal learned Monday. The fashion label was founded as Kate Spade Handbags in January 1993 by handbag designer Kate Spade.

“The bags themselves are never plugged into a wall outlet, but instead rest on a charging mat, which sends energy wirelessly into a battery inside,” reads the report by Lora Kolodny of the Wall Street Journal.

Following an exhaustive design process that took roughly ten months, the new collection will be available this September.

The lineup will include clutches, wristlets, totes and backpacks, costing between $198 and $698. The products will be sold by Kate Spade New York stores, Kate Spade online, Nordstrom and Everpurse.com.

While there are plenty of backpacks and bags with built-in batteries that can recharge smartphones, tablets and even notebooks on the go, these typically come from non-fashion brands.

And as Apple increasingly positions itself as a fashion brand, small wonder that luxury brands like Kate Spade have begun to take notice so this is hopefully the beginning of a new trend.