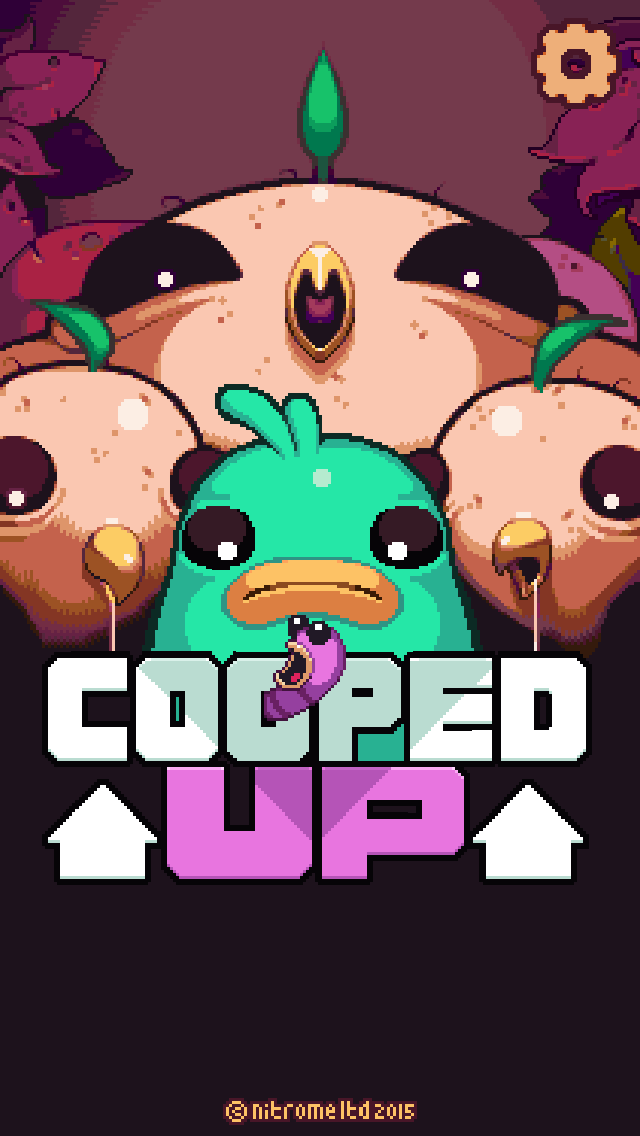 One of the first iPhone games I, and certainly many iPhone owners, ever played was Doodle Jump. It came out while the App Store was still in its relative infancy, and the iPhone was beginning its meteoric rise in earnest. Since its release in 2009, we have seen numerous games that copy its pencil and paper art style or gameplay mechanics. So many, in fact, that it has become relatively hard for any game that looks even remotely similar to stand out.

When you first look at screenshots of Cooped Up, I have no doubt that Doodle Jump, Mega Jump, or any number of other apps will be the first thing to spring into your mind. Cooped Up is more than just a cheap knock off, though. What makes this game different? Well, that’s going to take a bit of explaining.

In Cooped Up, you take on the role of a new addition to a bird sanctuary. The basic premise of the game is that captivity has made your avian companions a bit feral, and as a result, it seems somewhat unsafe to stick around. As a large, flightless bird, however, your method of escape is limited to small jumps from one branch or line to another. The concept is absolutely crazy, and that’s just what makes it so darn engaging. 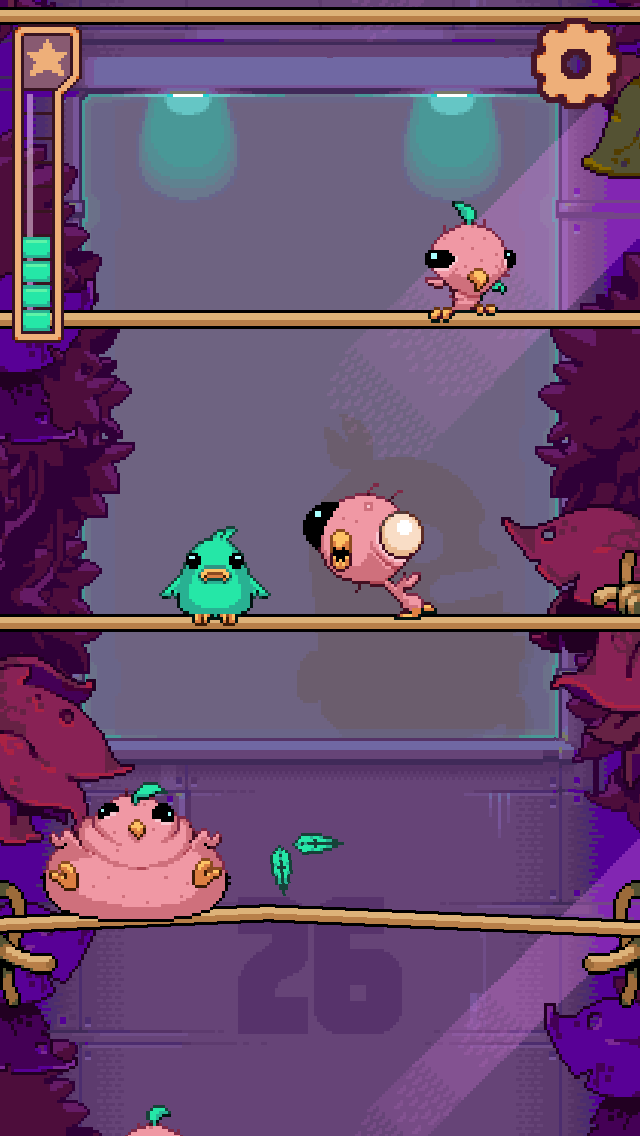 Cooped Up’s design is the game’s lifeblood. Everything from the enemies to the sound is done in a manner that matches the insane premise. The art is simultaneously cute and repulsive. It’s not difficult to imagine these creatures as concept drawings for a Binding of Isaac sequel, but the cheerful colors and happy-go-lucky soundtrack give them an almost joyful appearance. Cooped Up drips with a delightful irreverence that propels it far above other games I’ve played in the genre.

Your feathered protagonist is controlled by placing a finger on the screen and then drawing it back like a bow. Every time you pull your finger back, a small dotted line will appear in order to give you a basic idea of your trajectory. This makes a huge difference, because it takes a lot of the guesswork out of aiming and allows you to concentrate on avoiding the game’s myriad of threats. Cooped Up does a spectacular job of varying the hazards you face. Each enemy has a distinct pattern, and every few jumps bring you closer to a brand new enemy type. The constant introduction of new elements keeps the game fresh and exciting even as you start to rack up huge scores. 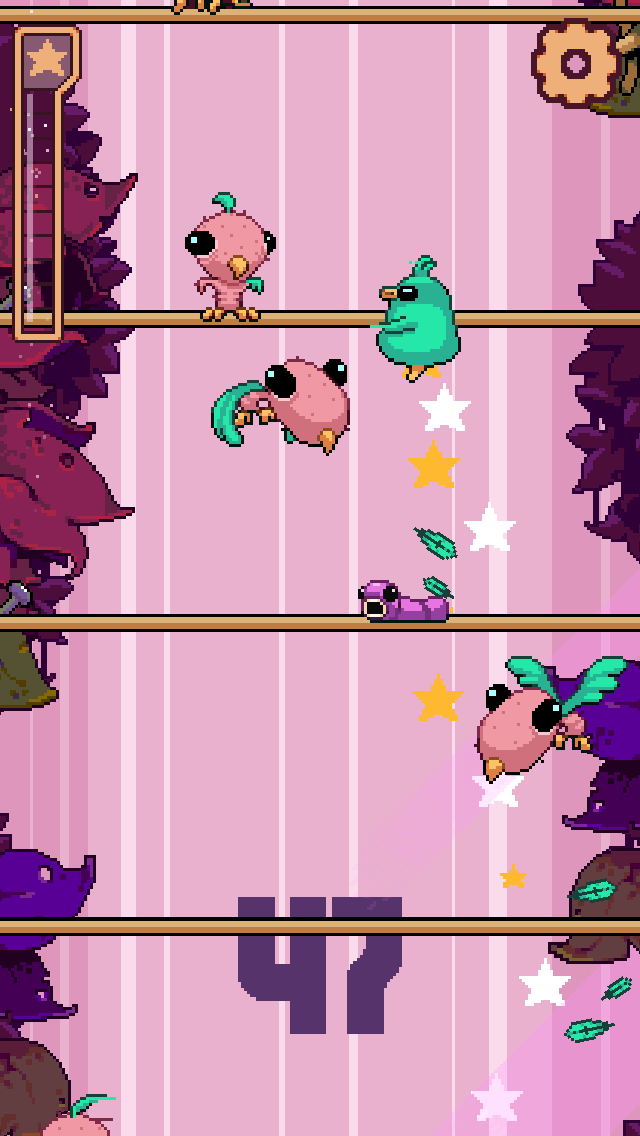 I found myself booting Cooped Up whenever I had a spare minute. Whether I was waiting in lines or waiting for a friend to get ready, Cooped Up was on my phone and ready to go. More than anything else, the game’s distinct sense of style is undeniably charming, and it serves to heighten the fluid gameplay and thrill of score chasing.

As you become better at Cooped Up, the early stages of a run may start to feel a little stale. The farther you get, the longer you have to wait to come up against the enemies and dangers that made your last run a failure. This can lead to some accidental deaths and eventually to frustration. These issues are more of a problem with the “endless” genre than with Cooped Up in particular, however. Still, your individual mileage will vary depending on your fondness for the formula.

Cooped Up is available as a free, ad-supported download with an in-app purchase available to remove the advertisements for $1.99. I never found the ads to be enough of a nuisance to warrant that purchase, however.

This game just has something special. The music, art, and attitude all mesh in this strange way that just keeps me coming back for more. It’s fun, easy to learn, and highly enjoyable in short burst, which is a lot of what makes an iPhone game a hit. I highly recommend checking it out.

As I said before, Cooped Up is certainly similar to games such as Doodle Jump and Mega Jump. It also subtly reminds me of recent mega-hits such as Crossy Road.