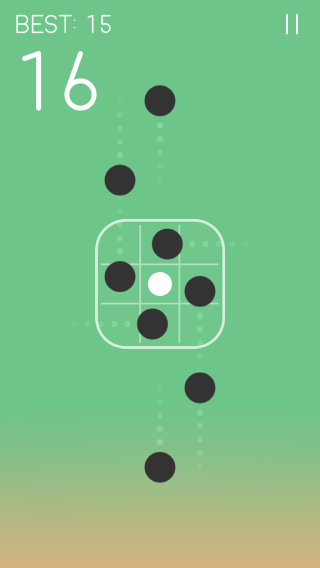 There aren’t many classic arcade style action games that are able to compensate for the iPhone’s lack of physical buttons. The loss of tactile feedback is just too much to overcome, but this doesn’t mean that we can’t enjoy a nice score chasing romp on our phones. It just means that developers have to create new games that rely on completely different control schemes. Simple Machine’s Smove does just that.

In Smove, you play as a small white orb trapped in some kind of tic-tac-toe themed prison. The goal is to move around the six available squares and collect the spinning boxes that randomly appear. This must be done while simultaneously avoiding the black circles that careen across the screen with increasing frequency. The goal is simply to survive long enough to rack up a new high score. It’s simple, straightforward, and exactly what I want from an arcade game. 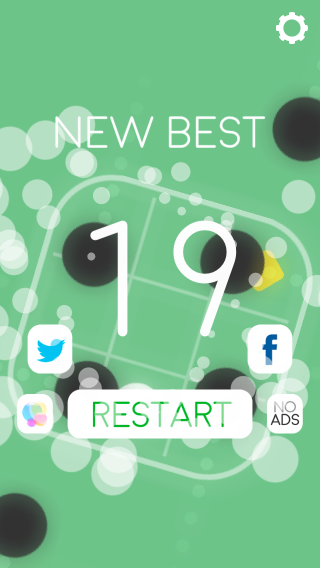 This game looks awesome, which is surprising considering how simple the concept is. All of Smove’s gameplay elements are clean and clear. They show up easily on the backgrounds and play well with the minimalistic sound effects. The backgrounds themselves are composed of pastel gradients that change with each level. All of this plays well with the game’s upbeat soundtrack.

Smove is exceedingly easy to pick up and play. You control the action by swiping the screen in any of the four cardinal directions. The game picks up on extremely small motions, and the inputs can be performed anywhere on the screen. This makes it extremely easy to see all of the incoming projectiles. 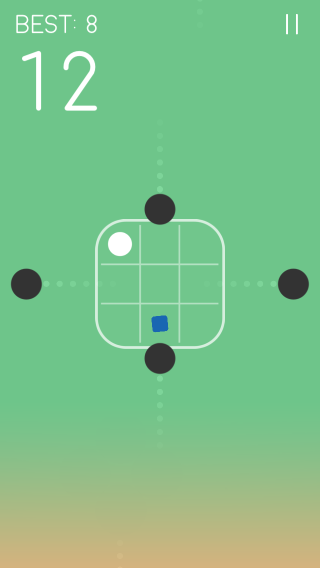 Games like this have to have intuitive controls that stay out of the way. This is the biggest failing of most other arcade games on the App Store. Their interfaces are often overly complicated, unresponsive, or take up a large portion of the screen. In games that depend on twitch reflexes, any one of these factors can lead to a lot of frustration. Smove raises above all this and looks good while doing so.

Smove could certainly stand to have a little more depth. High score chases like this are really at their best when they come packed in with a ton of variety. Smove never deviates far from its formula and suffers a bit because of it. A few mechanic changes would have been greatly appreciated. Smove does have a few tricks up its sleeve, though, as it is constantly changing up the dot patterns you face.

Smove is available as a free, ad-supported download. These advertisements can be removed by making an in-app purchase of $1.99, but I see no reason to do so. This game is fully featured right out of the gate, and the ads barely detract from the experience.

Smove is a simple, uncomplicated arcade game. This is both its greatest strength and its greatest weakness. If you’re looking for a casual score chasing game that’s great in short bursts, then you’ve certainly found it. If you want even a passing amount of depth, however, Smove may not fit the bill. Either way, if you’re a fan of arcade style action, this game is certainly worth a download. The controls here are on point, and really, what more could you ask for?

Smove’s simplicity and design remind me a bit of Atomic+.