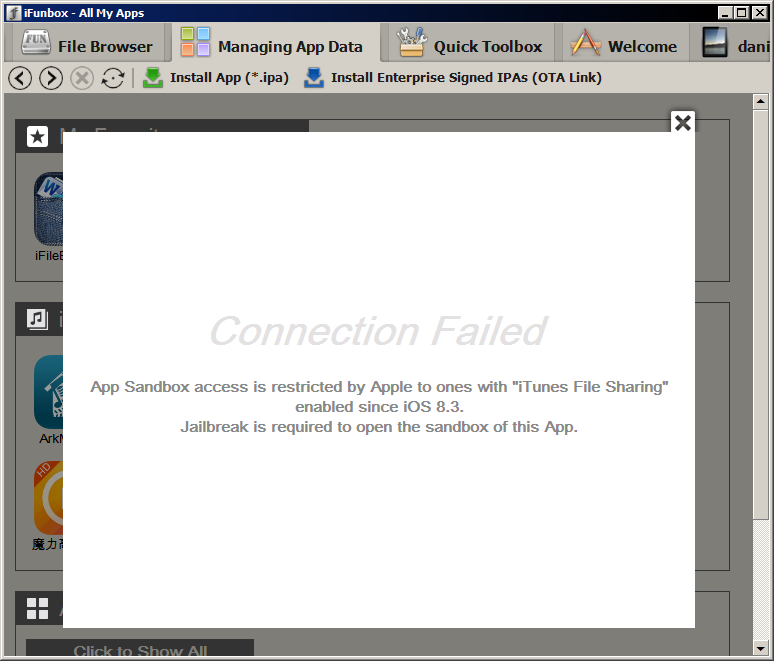 If you use desktop file managers such as PhoneView, iFunBox, iTools, iExplorer and others to browse app folders on your non-jailbroken iPhone, iPod touch or iPad, you have another reason to stay away from the latest iOS 8.3 update as it prevents those programs from functioning properly.

As first reported by Joe Rossignol of MacRumors, developers of these apps have confirmed that iOS 8.3 imposes additional restrictions on sandbox access.

In iFunbox, trying to access an app folder on an iOS device running iOS 8.3 produces a message saying “App Sandbox access is restricted by Apple to ones with iTunes File Sharing enabled since iOS 8.3”. This change does not affect jailbroken devices which can access app sandboxes as usual via OpenSSH for complete filesystem privileges and command line access.

The change breaks current versions of such file transfer utilities as iFunBox, iTools, iExplorer, iBackupBot and PhoneView, for both OS X and Windows.

“Now we totally lost the control of Apps on our own devices,” iFunbox developer said on Facebook. Developers are currently assessing the situation and will try to restore this functionality by way of a workaround solution, if possible.

“Before there is a solution, iFunbox will fail to open data directory of any app if the device is not jailbroken,” they noted. The latest version 2.95 of iFunbox was released over the weekend, allowing users to browse app directories of only iTunes File Sharing-enabled apps like VLC.

Accessing the documents folder on iOS 8.3 of apps that don’t have iTunes File Sharing implemented is no longer possible, at least for the time being.

The developer of another file-transfer tool called iExplorer confirmed that all iOS transfer utilities seem to be experiencing blocked access in iOS 8.3. “Apple has definitely changed something with the way apps can be accessed in iOS,” they said.

It’s worth repeating that jailbreakers should not install iOS 8.3 as it’s already killed the most recent TaiG tool and has patched another exploit used in the team’s hack.

Also, downgrading to an earlier firmware may soon become a thing of the past after Apple stops signing iOS 8.2 in the near future

Currently, iOS 8.2 is still being signed.