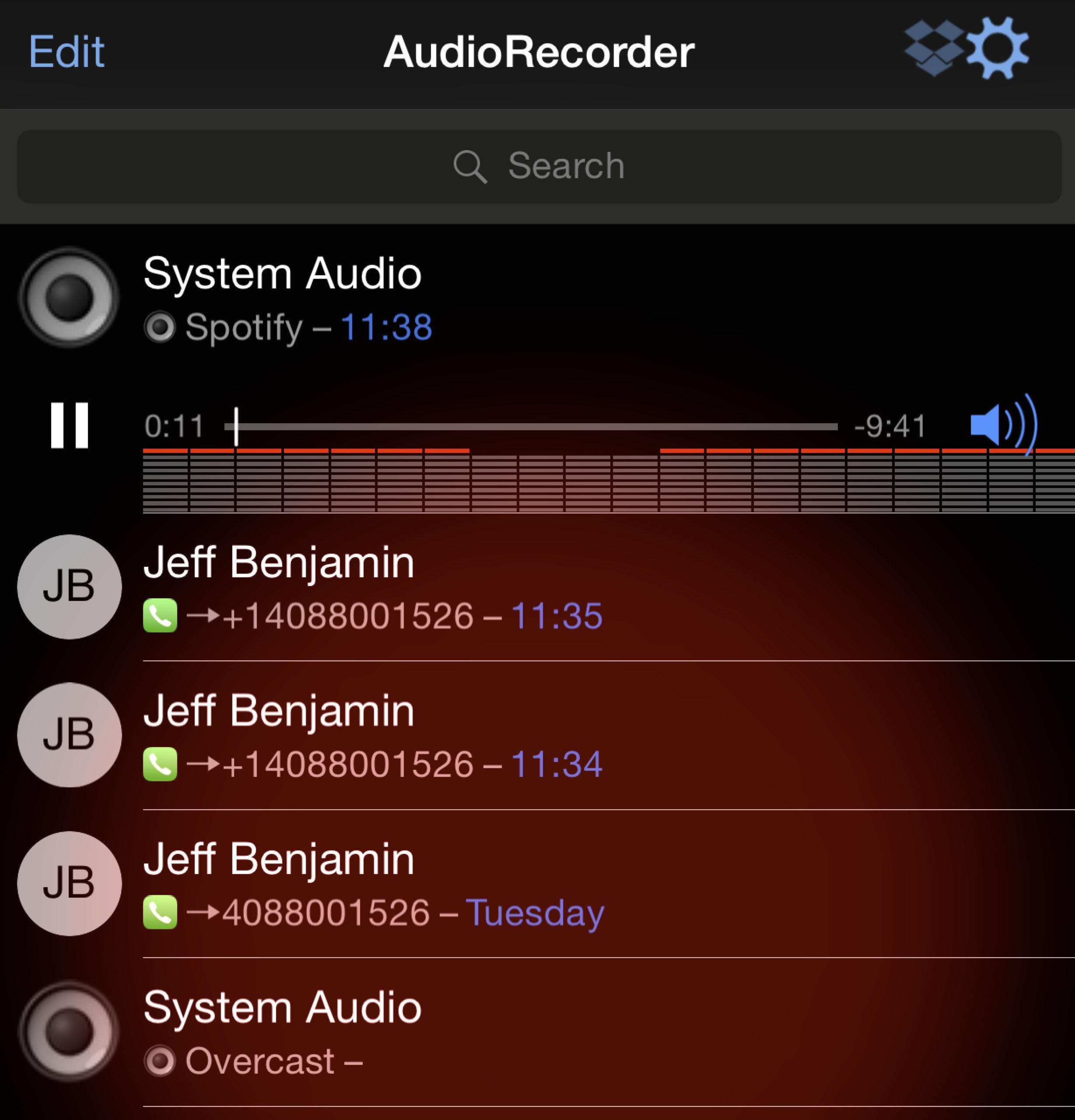 When you first think about Elias Limneos’ AudioRecorder XS tweak, the words “creepy” or “spying” or “illegal” may come to your mind. That’s because we usually associate recording phone calls with one of those words.

And trust me, AudioRecorder XS features a few legal warnings that you have to work through before you can use it. There’s even a detailed legal disclaimer in the tweak’s description on Cydia.

But viewing AudioRecorder XS as a way to do bad things is totally unfair to such a great tweak. Not only is this release well-designed and extremely functional, it contains a bevy of practical elements that many may find useful.

AudioRecorder 2 is an impressive jailbreak tweak that allows you to record phone calls from a variety of sources and also lets you record system audio. You may be familiar with other jailbreak releases by Limneos, such as CallBar and BioProtect. AudioRecorder XS lives up to the benchmark set by those two tweaks. Have a look at our full video walkthrough for the details.

The AudioRecorder XS preferences is where you go to initially configure the way the tweak works. You’ll find a kill-switch, and a few global settings for providing audible warnings for in-progress recordings. 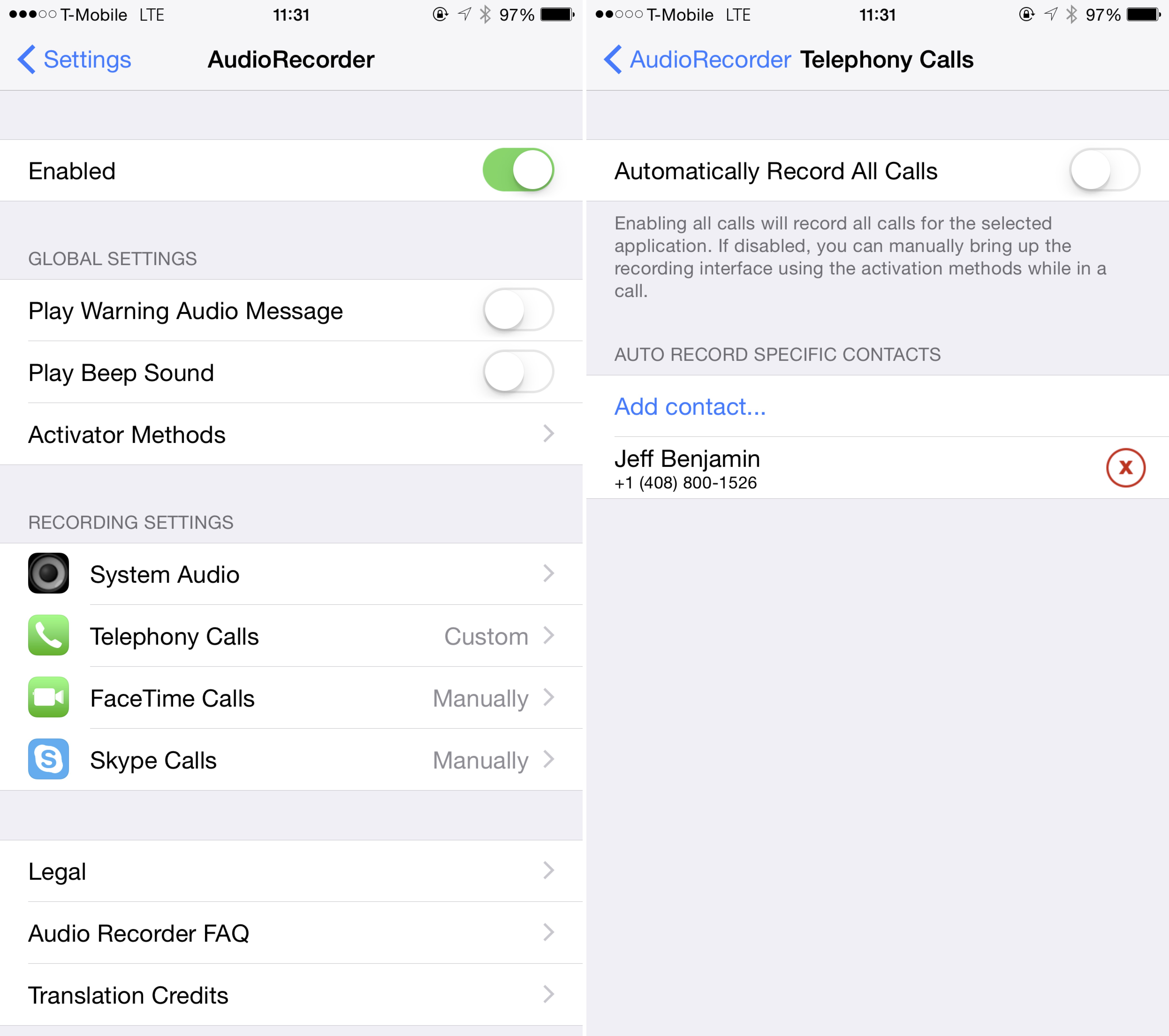 You’ll also need to establish an Activator gesture that can be used to invoke the AudioRecorder manual interface. This manual interface will allow you to start and stop recordings while anywhere on the iPhone.

Lastly, you can establish recording settings for system audio, telephony calls, FaceTime calls, and Skype calls. The system audio option allows you to record any audio that comes in or out from you iPhone while an application is using the speaker or microphone. 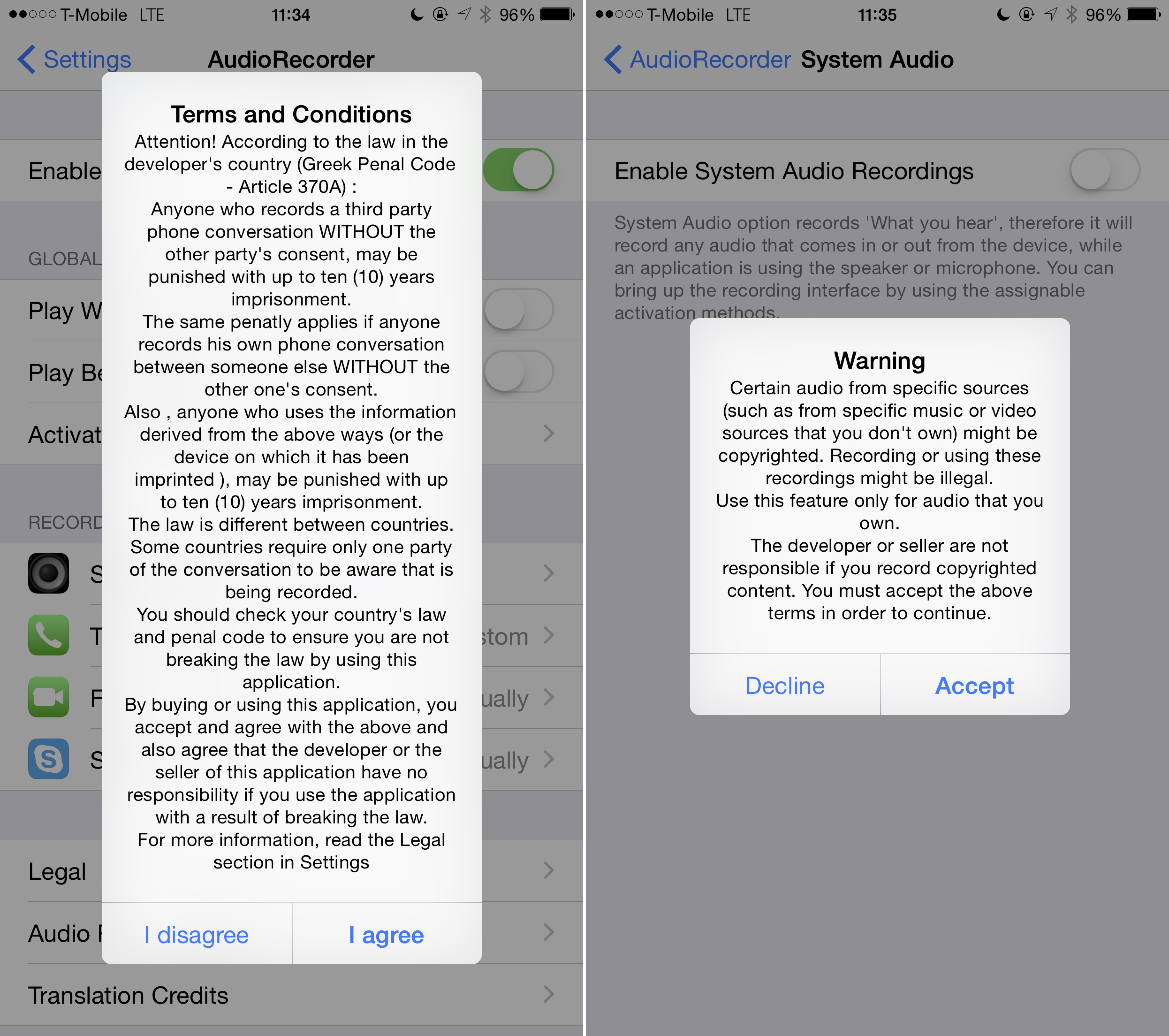 The telephony, FaceTime, and Skype options all feature the same settings. You have the ability to record all calls automatically, or keep the audio recording on a manual basis, accessed via the aforementioned Activator gesture. You can also choose to auto record specified contacts, but I found this setting to be lacking in function in the version I tried.

The app interface is where all recordings are housed and managed. From here, you can play recordings, purge them, and share them using the iOS share sheet. 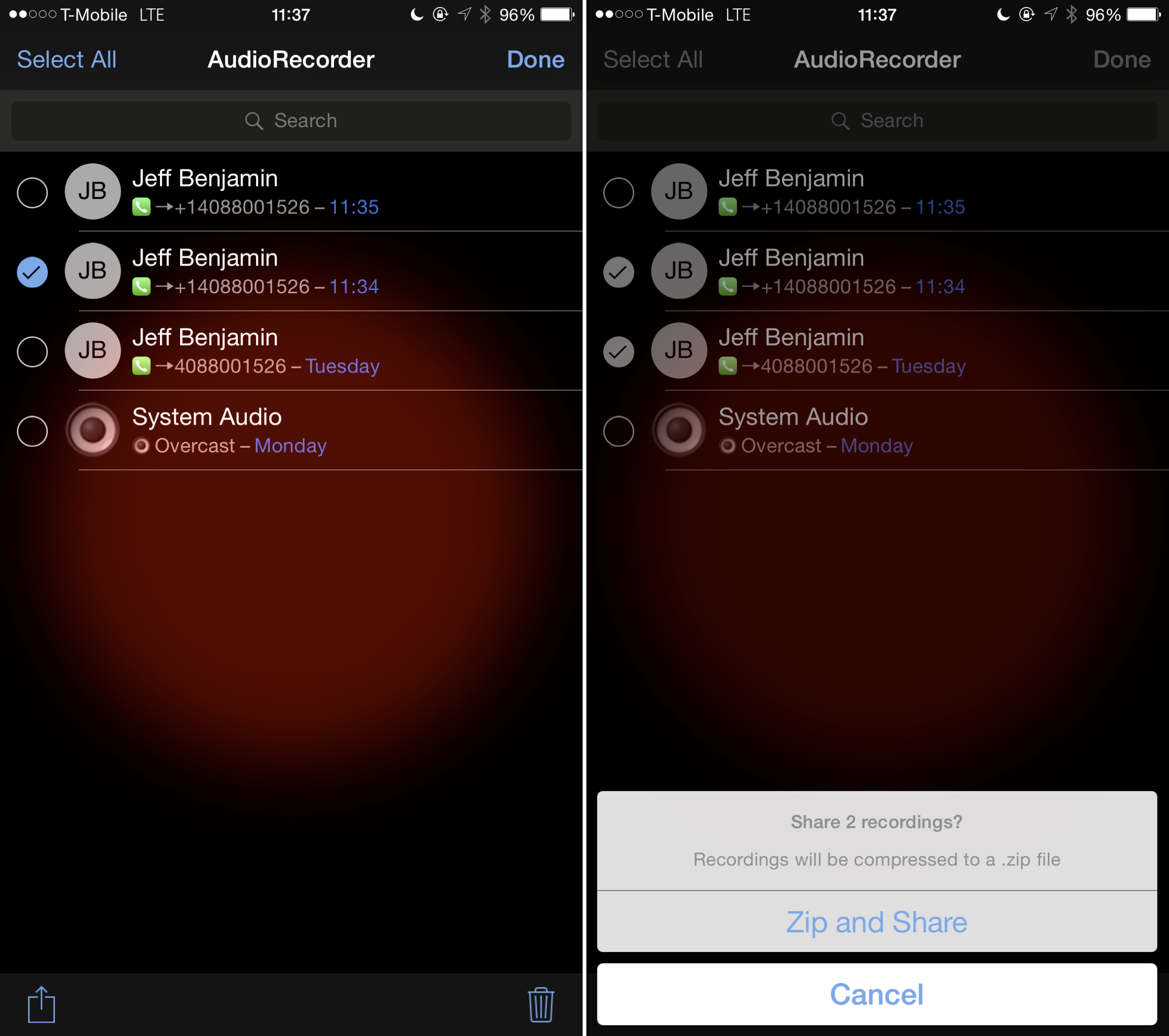 The app also allows you to establish auto uploading to a DropBox or Google Drive account and features syncing over cellular. For those of you who prefer to manually manage recordings, you can enable a web server to pull files off of your device from a web browser.

The last interface that you’ll need to become familiar with is the manual interface. This is the interface assigned to the Activator gesture set up in the tweak’s preferences.

The manual interface looks like a little on-screen nub, and it can be dragged around the screen so that it’s not in the way. It looks a lot like the AssistiveTouch nub found in iOS’ accessibility settings. 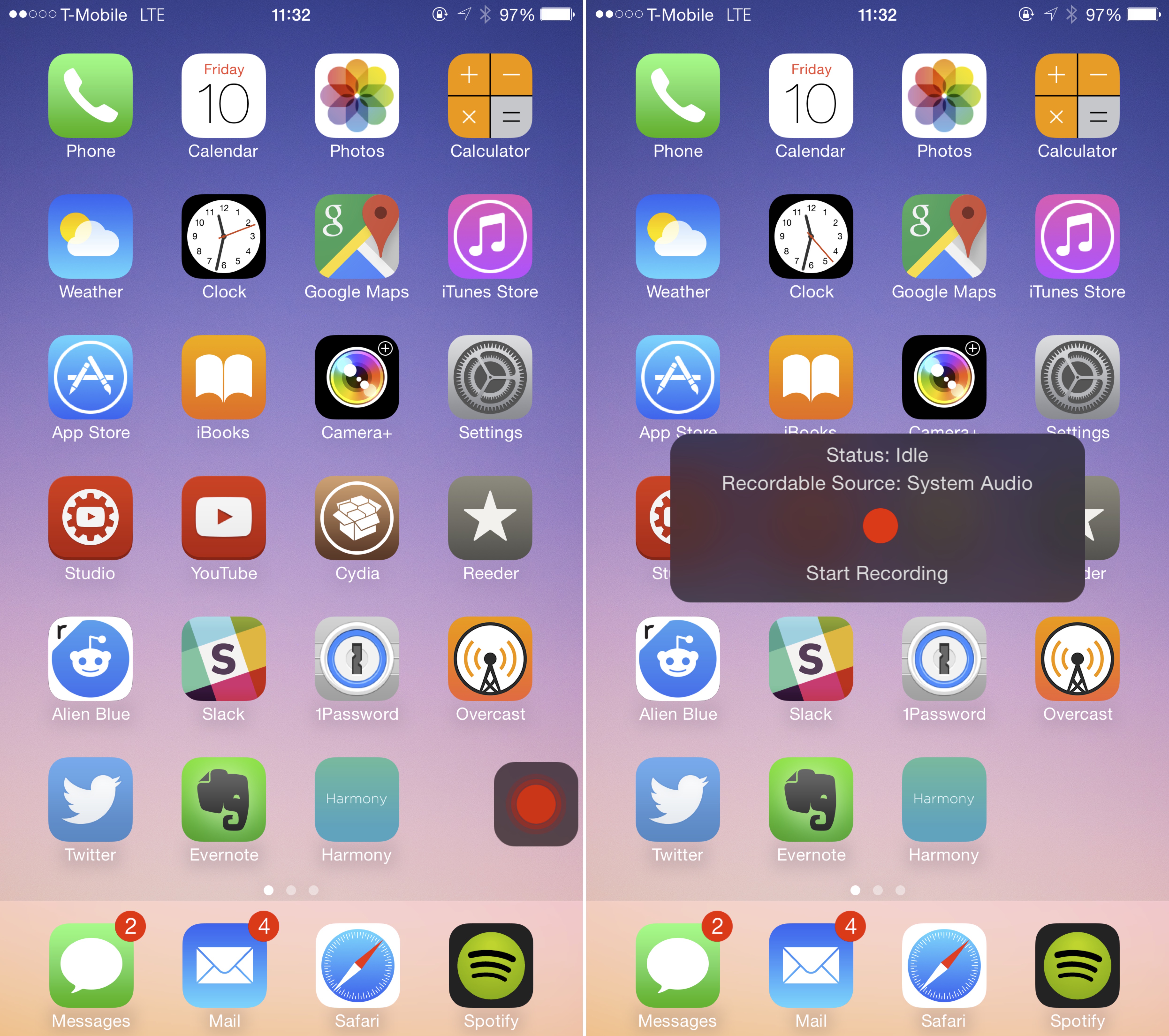 Tapping the nub brings up an overlay that allows you to start a recording or stop an in-progress recording. It also denotes what the source of the recording will be.

I think that the stigma behind recording phone calls is hard to shake, but I can see some real-world uses for it if both parties agree to do so. Suppose you were talking to someone and they told you directions to a specific location. Wouldn’t it be helpful to have an audio recording of those directions for when you actually needed them? I admit that the use cases that I come up with a few and far between, but I’m sure there are some that may find a feature like this to be instrumental.

My usage, however, differs significantly. I could see myself using AudioRecorder XS to record system audio much more often that I’d find a need to record phone calls. Think about recording excerpts from a podcast and sharing them with a friend. I could definitely see myself using AudioRecorder XS to record and share snippets of audio that I deem useful for my friends and family. And don’t forget, the built-in DropBox functionality makes sharing even faster. 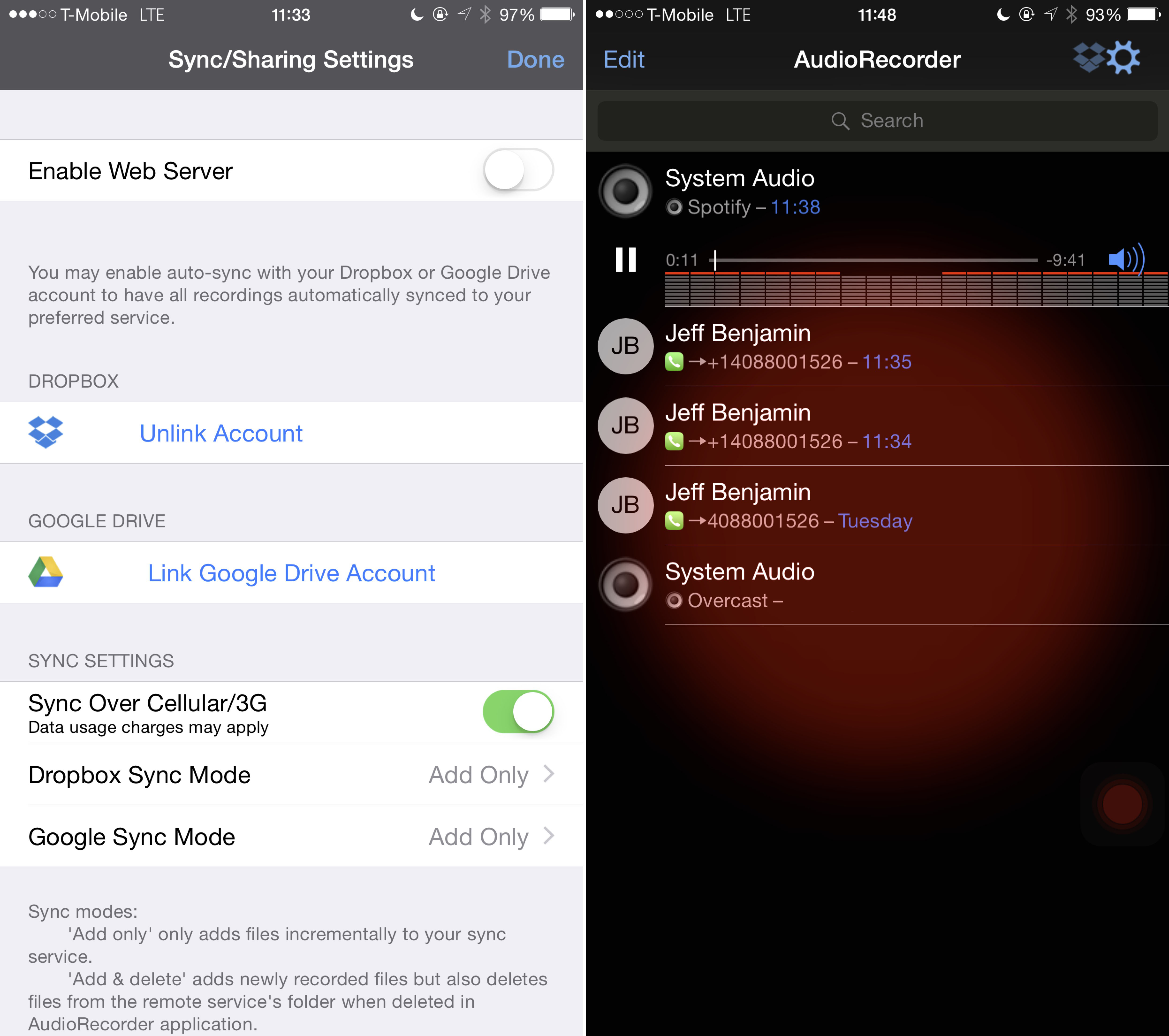 Being that AudioRecorder XS is the first and only tweak of its kind with this sort of depth and design, I’m fully on board with the $3.99 asking price. Even if you don’t think you’ll ever record actual phone calls, AudioRecorder XS provides enough features and impressive design that makes it well worth its asking price.

There are a few limitations that you should consider prior to purchasing. The iPad doesn’t support system audio recording, which could be a deal-breaker for would-be iPad users. The iPhone 4S features a limitation that means you must use speaker to record regular telephony phone calls.

But if none of those limitations will prove to be a hinderance to you, I recommend trying AudioRecorder XS. If you’d like to try it, you can add Elias’ repo to your list of sources.

His repo is as follows:

What do you think about AudioRecorder XS? Sound off down below in the comments with your thoughts.