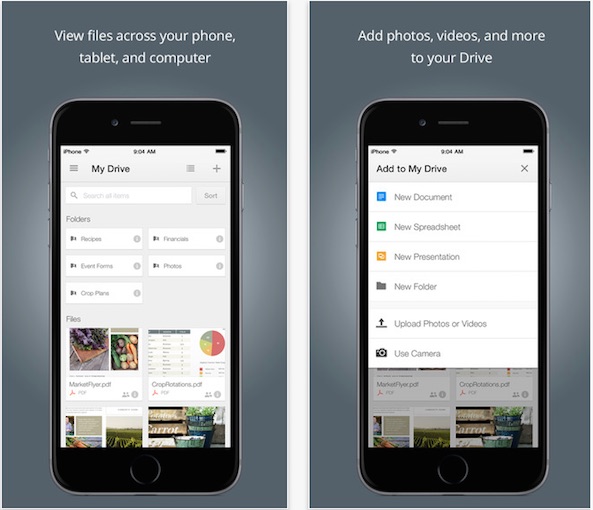 The search giant Google announced yesterday it is adding support for Google+ Photos to the Drive app on iOS, Android and the web. “Starting today, the photos and videos you keep in Google+ Photos will also be available in Google Drive,” said the company.

In addition to storing your photos and files together in Drive, the refreshed Google Drive for iOS app has introduced a new Auto Backup feature to ensure that your Camera Roll photos and videos are safely backed up in the Google cloud.

In addition to Auto Backup, Google Drive 3.5 for iOS includes bug fixes and performance improvements. The update also adds a folder to your Drive for all your Google photos and videos.

You will be able to manage your Google+ photos and videos alongside other types of files in Drive, add and delete images, create additional folders and more.

Google said that users should start seeing their Google+ photos in Drive immediately if they’re new, adding it will take a few weeks for your entire library to appear in Drive.

“Once the feature has made it to your account, existing photos will start showing up in Drive in the coming weeks, but new photos that are added to Google+ Photos should start to appear right away,” said Google.

“You can optionally choose to create a Google Photos folder in your My Drive, which will allow you to organize your photos and videos into folders,” reads the document. “And don’t worry – photos that you can see in both Google+ and Drive only count once towards your storage limit”.

Sadly, your Google+ Photos edits don’t appear in Drive. To have the edited photo appear in your Drive folder, you must download the edited Google+ photo and upload it to Drive, which is a bummer.

You can copy, move around, and edit your Google photos in Google Drive, but those changes will not be reflected in Google+.

Deleting a photo or video from the Google Photos folder in Drive will also delete it from Google+. And if you copy, move around and edit your Google photos in Drive, those changes will not be reflected in Google+.

Tapping the info icon next to a photo or video in Drive puts up a sheet with the following options:

To view your Drive photos and videos on Google+, open the mobile Google+ app and touch the menu icon at the top left. Now tap Photos and then the magnifying glass icon at the top. Now type “#GoogleDrive” in the search box and hit Search.

Keep in mind that the Auto Backup feature is rolling out over the next few weeks so don’t panic if it’s not be available for you just yet.

Google’s Sundar Pichai recently told Forbes that Photos+ will be repositioned as a standalone product accessible across other Google services.

“I think increasingly you’ll see us focus on communications in Hangouts, photos and the Google+ stream as three important areas, rather than being thought of as one area,” he said.

Google’s Bradley Horowitz took over the Photos and Streams products earlier this month as part of the sweeping changes revolving around Google+ social services.