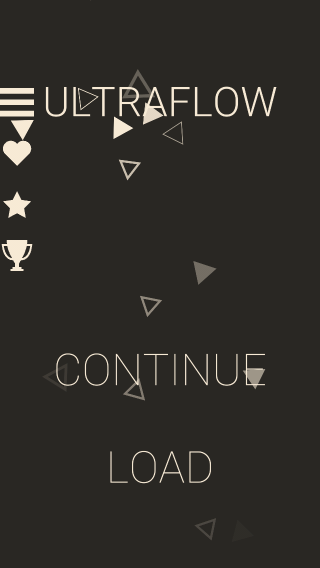 ULTRAFLOW draws heavily from both the puzzle and action genres. Each level is essentially a two stage process. First, you have to figure out how to solve the puzzle. Then, you have to actually be able to do it. This creates a surprising amount of challenge in ULTRAFLOW, proving that it’s more than just a fun word to type.

The idea behind ULTRAFLOW is rather rare, but still one that we’ve seen before. Each level presents the player with the same problem of getting a small sphere into a hole on the other side of the screen. There are various obstacles in the way, and the ball can only touch so many things before shattering. Figuring out how to best attack each layout is only half the problem, though, because actually completing stages takes a fair amount of dexterity and skill.

When done well, these puzzle/action hybrids can be a lot of fun, but if executed poorly they can be a chore to slog through. I would be lying if I said that ULTRAFLOW’s 99 levels didn’t contain a few duds, but I am happy to report that there are far more enjoyable stages than there are problematic ones. 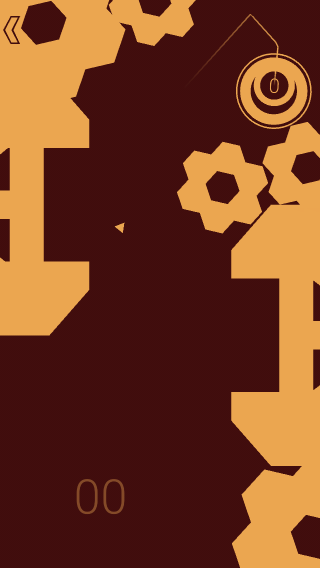 ULTRAFLOW continues the popular trend of simplistic graphics and minimalistic sound design. It works as well here as it does in any other game, but does little to make ULTRAFLOW stand out. The music has a nice beat and matches the environment well, but it is ultimately forgettable. The game does a great job of shifting its color pallet with each set of stages, though, which certainly helps to keep things looking fresh. 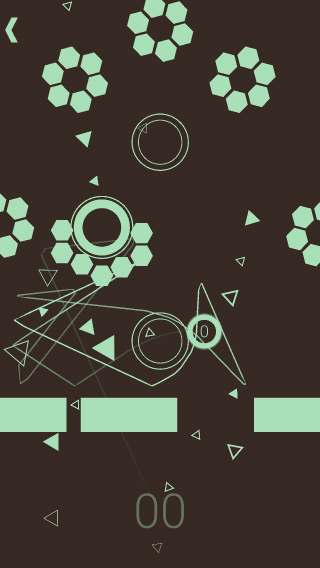 The only motion required to play ULTRAFLOW is a simple flick. The amount of control this gesture allows, however, is truly startling. Everything, from trajectory to velocity, can be influenced depending on how you manipulate the screen. The game’s physics create an almost billiards-like feeling of top spin and draw. How gently you push the circle also comes into play, as it may simply run out of steam and stop before reaching its goal. I felt that I had a tremendous amount of control over ULTRAFLOW’s sphere, which is exactly what you need out of a game like this. Had the controls been poor, it would have been almost impossible to finish some of this game’s more challenging puzzles.

It’s obvious that a lot of thought went into every aspect of this game. The developers have dissected this genre and successfully identified what aspects cause gamers the most grief. ULTRAFLOW is fairly generous with level skips and has hints that can be toggled on or off. It also saves off boredom by adding new mechanics at a satisfying rate. ULTRAFLOW uses these mechanics to constantly reinvent previous puzzles. It’s always satisfying to see a familiar puzzle that has to be solved in a brand new way.

ULTRAFLOW doesn’t exactly reinvent the wheel. We have seen these same mechanics before, and maybe even done a bit better. It is an extremely polished game, though, and does away with a lot of the problems games like this frequently have.

ULTRAFLOW was actually created by a group of students over the course of six months in order to test their limits and see what kind of a game they could make. Seemingly in an effort to get the game into as many hands as possible, they have made their work 100% free. ULTRAFLOW isn’t even ad supported, which is a refreshing change from most free apps.

The developers behind ULTRAFLOW may not have broken new ground, but they certainly have made a strong showing. There are few negatives to levy against this game, and the improvements it makes, while subtle, are numerous. Ultimately, ULTRAFLOW provides a satisfying challenge, which is exactly what fans of the genre are looking for.

ULTRAFLOW distinctly reminds me of VVVVVV. Even more than the graphics or the sound design, it’s the gameplay that I find to be the most similar. Both games rely heavily on the fact that knowing what you have to do doesn’t always mean you’re able to do it.